A little bit of history. Massacre was my first attempt at a vaguely complicated, offensive featherweight i.e. a spinner. Of course due to lack of engineering skill/common sense/budget it didn't go well, in fact I think I might have actually made the worst spinner ever. It did a grand total of about 4rpm for a period of about 0.4 of a femtosecond. But regardless of this it won a couple of fights and qualified for the second stage.. where it promptly lost but hey ho, still better than my previous one win to two losses last year.

This was Massacre V1.0 The design is basically a copy of the very successful robot Hazard, except with all the functionality and destruction removed and replaced with..um..orange wheels and a stainless steel bar.
I still love the overhead concept and I still believe that they can be an awesome force if properly constructed. I'm just having major problems with that part. I'm starting a 2 year mechanical engineering course next week at collage so that should be able to, if nothing else teach me some nice useful practical skills and some nice bits of maths and physics.
Lack of planning and no real world experience with gears lead to the weapons failure. To combat this I've been planning the setup much more in-depth than before and will be leaving enough time to test that it works in reality. Here's hoping for >5rpm this time! General robot practice is to KISS, you know, Keep It Simple Stupid. That's all well and good if you want to build a boring winning robot, but I want cool shit.

6wd? Check. Overhead bar? Check. Hardox wedge? Double check. Now personally, I think this looks right smegging cool, over complicated maybe and it won't be a world beater, in fact it would not surprise me if this did worse than V1.0.

Parts for this are all major upgrades to the parts used on the V1.0 as I shall now compare.

Since having 6 separate motors for the wheels would make the world implode with awesome  put me overweight I elected to have a series of belts and pulleys that would  give me the 6wd. Now when using pulleys you have to work out distances (lots of calculators and things available online) between the centres so you don't end up with too much slack or the belt being to tight. I first used this on the Beetleweight to see if it was reliable, and it was so not I put it to use on a featherweight (using larger belts and pulleys obviously) Now the pannels that make up the frame are high grade aluminium and they need holes drilled actually, which then need to be bored out to a large diameter to accommodate bearings. Now precision isn't exactly my forte so I would some assistance. I could get myself a hole saw and a costly sheet of alu to butcher or... 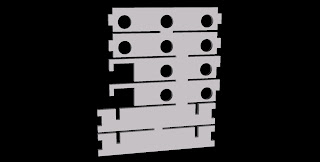 Enter waterjet stage left.
I have wanted to play with a waterjet FOREVER and now I get the chance. Now people knowledgeable in such areas mentioned to me that all the cuts and blow outs (holes, etc) really ramp up the cost so I came up with.. Ze Great Uberlump. Its one long cut around the outside, and only 10 holes so its not totally bank busting allowing me to be able to afford a better material. I do have to put a bit more effort into assembly, popping the panels out airfix style and filing them down myself. Not quite the jigsaw puzzle some people like.. but then again this is just a boring box. That just about covers it for now, when I get my act together and start the build Massacre will feature quite prominently here.
Cheers.
Posted by Haz at 09:56