So I've been uncharacteristically busy the last few days, first thing was getting the beetleweights all ready to hand back over to Shane at the Euro champs at Norwich on Saturday. Friday evening saw me spin up the full body spinner "The Gimp" for the first time. I had not had a real chance to play with it before as one of the battery packs was legit dead. literally no life from it. Nothing. But it seemed to work fine on the one pack, better than it did on two for some reason I'm not clever enough to understand. It had enough juice to power the weapon.. but it dropped a bit and the drive esc went a bit jittery. No limbs were lost and no cockney orphans were harmed in the name of science so it was all gravy good.
You can see the glory of the full body spinner spinning here. That little motor is such a beast, spins up the 500g odd shell in next to no time. There are some amusing dethspiralz when I go too hard on the throttle. Some time near future there will be a single tooth and counterbalance assembly on it.. scary! All the beetles got a bit of attention on the benches, I'm really pumped to be involved right at the start of this totally kick arse weightclass

Also what was totally kick arse? Me getting to control one of the heavyweight competitors. The wonderful Air built by Shane Swan no less. I loved it, I was sharing control with Dave Weston. He was driving and I was operating the flipper. In our heat we faced Storm 2 and cherub and with Dave's rather swish driving skillz we won. However an on-the-spot weight check showed that Air was over weight and we were "disqualified" so the victory went to Storm 2. Later on, in a whiteboard out positions were reversed and I was driving. Against Turbulence and Tilly?..something I forget, apologies.  This could only go all the well ever. Well, I wasn't totally crap. Weston's sharper reflexes helped with the flipper and we were able to get under the other two pretty easily even if I did forget how to forwards occasionally. We somehow won this on a Judges decision. 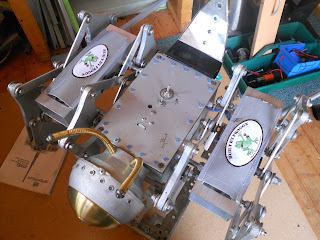 I took home a new pet
Spider bot, Spider bot does what ever a Spider bot does. Can it swing from a web? No. Its about 13kg.
The wiring needs to be totally re done and some new Lithium polymer batteries can replace the shagged NiCads. It sports a very nice walking mechanism. Slightly obsessed with it now. Its also just crying out for steampunk... I mean.. LOOK AT IT.

In other, less interesting news. I started collage today. A 2 year mechanical engineering course. It seems all well and good so far although maths might skullfuck me a  little. See how it goes. I'm fed up being stupid. I want to learn things now. Machiney things.