Yeah I sort of realised that I had managed to spend about 8-9 months on the design of the robot, leaving me with a worryingly short period in which to actually build the thing. Then I realised that I had even less funds than I thought, due to me not actually having a job atm (can have a job where I build things please, thank you) 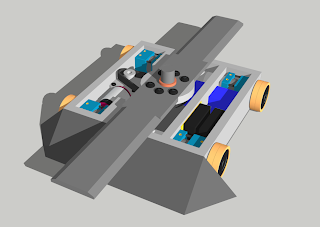 The only option was to build Hazard and Brutality at the same time and call it Massacre!

Here you see the first version of the non 6wd design times, basically
exactly the same components as last year's massy. Same drive motors, same ESC and same battery. The weapon system is the new one, because I have the motor already. The gearboxes will be changed from 36:1 to 24:1. This brings the speed up to about 6mph, slow due to the small wheels but with the large weapon at a low height, I don't need massive speed. I know the belt is kind of screwed up... I changed lengths and couldn't be arsed to change it
it's like it in all the CADs. Yay laziness 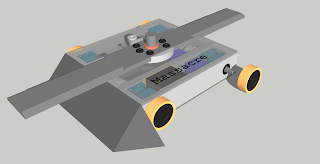 The frame is still aluminium, but no longer 7075. Due to expensiveness and companies ignoring my quotes. It has got a lot thicker though, its 15mm 6082. Still keeping the finger joints though. To support the motor shafts even more there will be an additional bearing in the bulkhead as you can see. 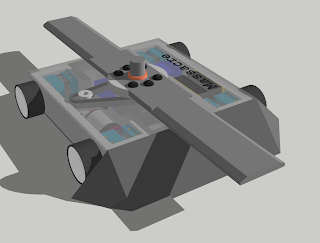 Now this was all going very well for the cheap design, even better when I was very kindly sponsored some ESC's by another roboteer. These are Botbitz TZ85 which offer much smoother control than the clunky Electronize and are much smaller. The orange wheels which kind of became a staple in the Massacre designs are Banebots wheels, very grippy, but not all that durable, and fairly costly to boot. With the rather un-wonderful restraints I'm working too, these sadly had to go. Lucky for me I know a guy with a lathe. I mean, he happens to live in another country, but that's easier to deal with than £4 a wheel when I need at least 12! 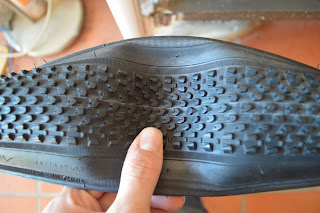 Anyway he was kind enough to go out and sample the local bike tire collections until he found these ones, which are pretty perfect. Not the massively lumpy off-road tires, but a nice balance. These will be screwed to nylon hubs that will be turned on his lathe. They end up 60mm diameter and 30mm wide, small and with hopefully moderate grip. 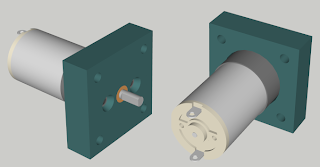 And now for something completely different: Beetleweight motor mounts. The appeal of something simple, like a basic wedge (NOT just a plain brick) was too much, so I set about trying to build something. First off I needed a solid way of mounting the 1000rpm ebay motors. A few quick drawings in CAD and I had a plan. Worked out well. If it interests you, there is a video of the making of the mounts. Nothing special, but they work for me. 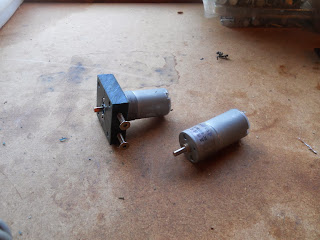 Picture of the finished mounts here. They are made of 12mm thick nylon. I would like to maybe make an aluminium pair for extra strength. Or maybe even some of the chopping boards I have. 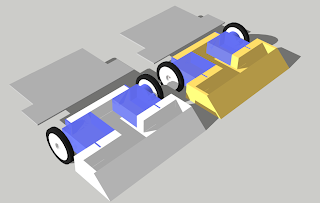 Speaking of chopping boards I realised the other day that if I get the mill, antweight frames become very easy and interesting indeed, and I can do some really cool stuff with them (I give up on competitive antweights) This leads us on to a cluster bot idea I had, Chalk and Cheese. One piece frames made out of the yellow and white chopping boards i have, speed hacked servos and say 160mah lipo cells should have a fun little joke entry that will be pretty solid.

See if something can actually be built soon. Cheers. Haz
Posted by Haz at 07:16