An eloquent start I think you will agree but I feel it apt to describe the general feeling I'm getting from the whole Massacre built at the moment.

I do tend to get the "one step forward, two steps back" when I try and build something, but with this I'm don't have the advantage of the step forward, so I'm seemingly making up for that with some extra steps back. I'll quit whining (lies) and get on with listing the changes.

I've decided to actually make parts for my own robot, and not totally waterjet flat-pack jigsaw puzzle it, this isn't due to me taking some stupid high ground, its just so much bloody cheaper this way. I have a sheet of Hardox, around about 3-4mm thick which should do fine. I marked out the base to get a rough idea of how much other stuff, like the wedge and wheel guards I could fit on there. Wow. My robot is fucking tiny. Or the base plate is at least. Should be interesting to work on I guess. Making it larger isn't really an option, unless I want a 16kg feather. Weight is going to be a pain anyway despite the thing being almost able to fit inside my pocket (hyperbole, I don't have pockets that big yet although they would be handy) 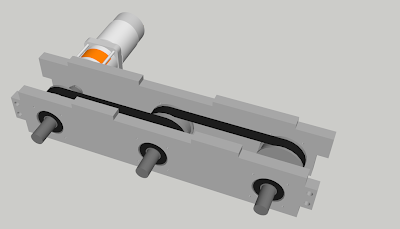 Main change, and one that slightly pains me is the change of drive motors. I'm switching from the Magnum 775 to the Banebots P60. Reason being is that the Banebots are actually in stock, and are a bit cheaper. I was having to do an order from the Banebots website anyway for 775 motors and wheels. It makes sense to add another $100 or so in gearboxes while I'm there instead of having to get two very large orders from the US and get fucked over twice by bloody customs. The Banebots are a more commonly used motor as well, so lots of the guys at the comp will have spares and stuff that I could buy/rent/borrow/steal so I have to carry less. 2 spare motors, maybe a spare gearbox if I have any spare polly to throw at it (who am I kidding, I won't) The Baneboobs are a tad smaller than the Magnums used to be, so some kind of horribly ghetto enlargement surgery will end up happening. Or I could just change the mounts? Yeah. Best do that instead of buggering about with an expensive gearbox.  You can see the adapted bulkheads, it has ended up probably stronger, due to the general lack of large square holes. No idea on what the cost would be, none of the cutting places are talking to me. Depressing. 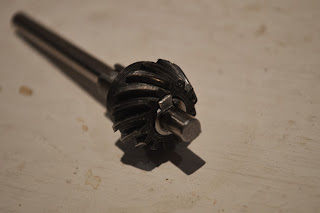 In actual progress news, the updatephobic Elvis is lathing away like a bitch, doing cool little odds and sods and found some time in his "busy" schedule to make some prototype Rangleboxes. They are a bit more wooden than the real ones, but that's cool. Part of me wants to see how they react to the 40k rpm. I mean, wood just loves high speeds and friction right?? Right?? 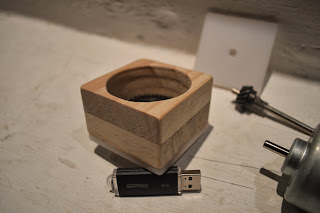 Pretty cool eh? I'm not 100% sure but I think the USB isn't a essential component, but then again it could be a traditional Spanish building technique. 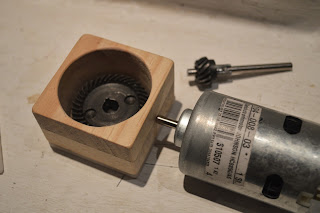 Shown is a rather large brushed motor. No idea why, maybe someone is planning to use Rangles in a drive setup.... Nah, nobody would be that stupid would they?


All for now, and how joyously uninteresting it was!
Ta, Haz.
Posted by Haz at 10:19