But yeah. Massacre is done, or at least as done as it's going to get. I head off to the NEC tomorrow and have my first rounds of qualifiers the day after.

First up on the list of parts still to do was to make up a link protectey device. I had toyed with the idea of milling out a HDPE block for it to sit in but that was quite a lot of effort. In the end I used a bit of hollow 25mm OD tube that I got from my high school. It had probably fallen off a handle somewhere so had been added to the Resmat pile of materials. Of cource 25 OD cannot pysically mean 25mm ID so I cut some slits in it and bent it outwards to be a snug pushfit. 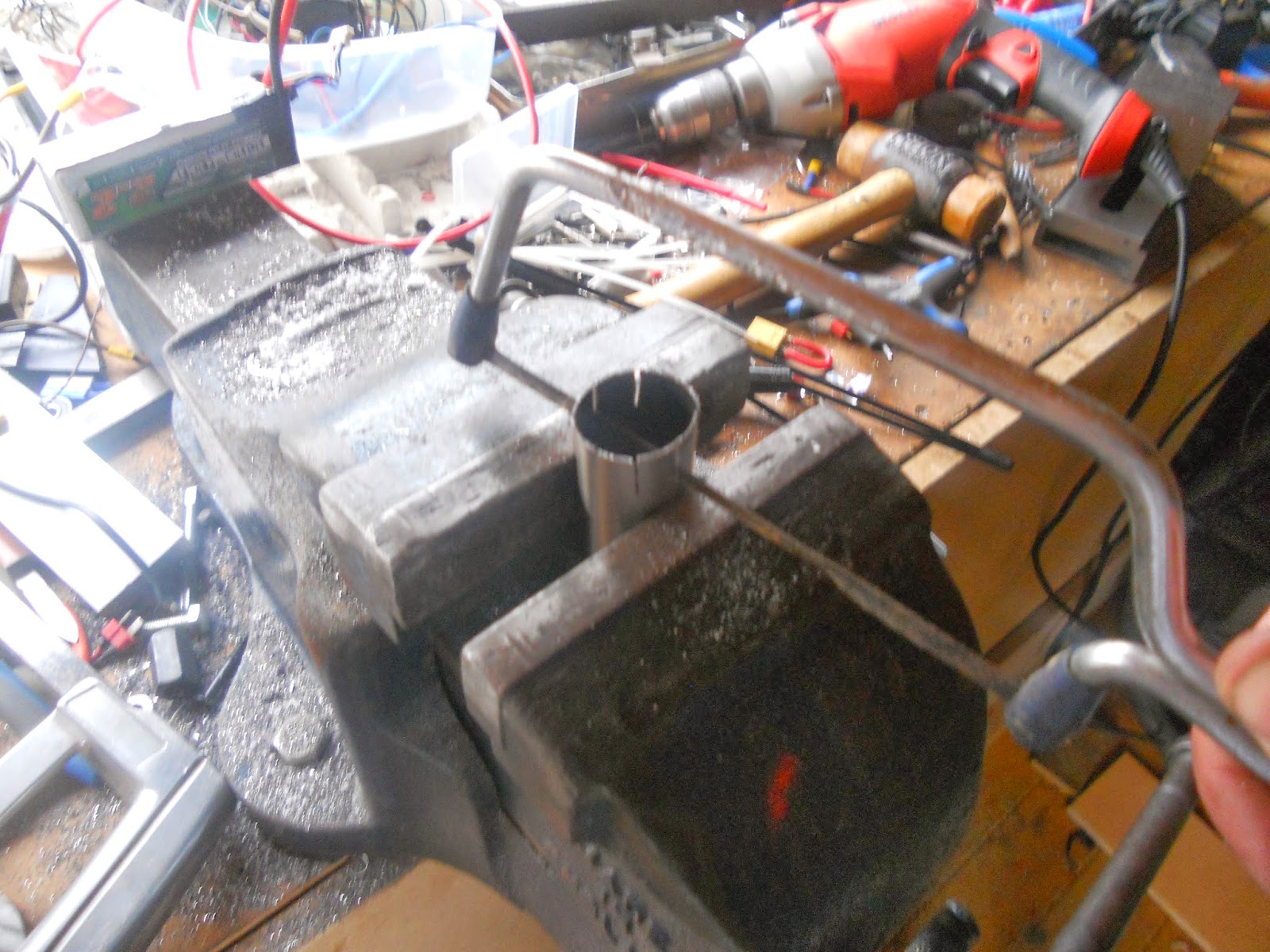 Once formed I epoxied it to a shaft collar. Because super legit attachment methods are my speciality. 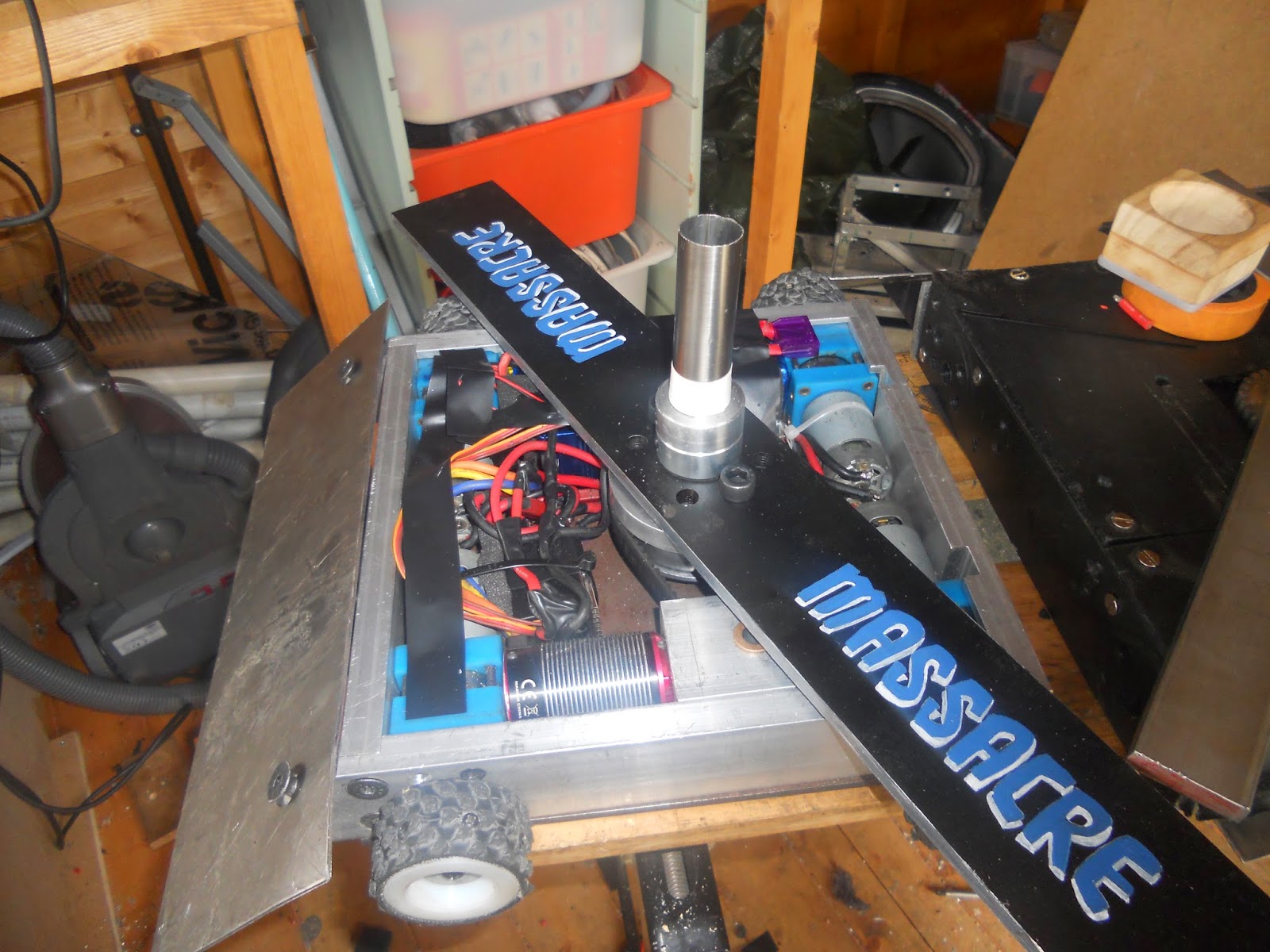 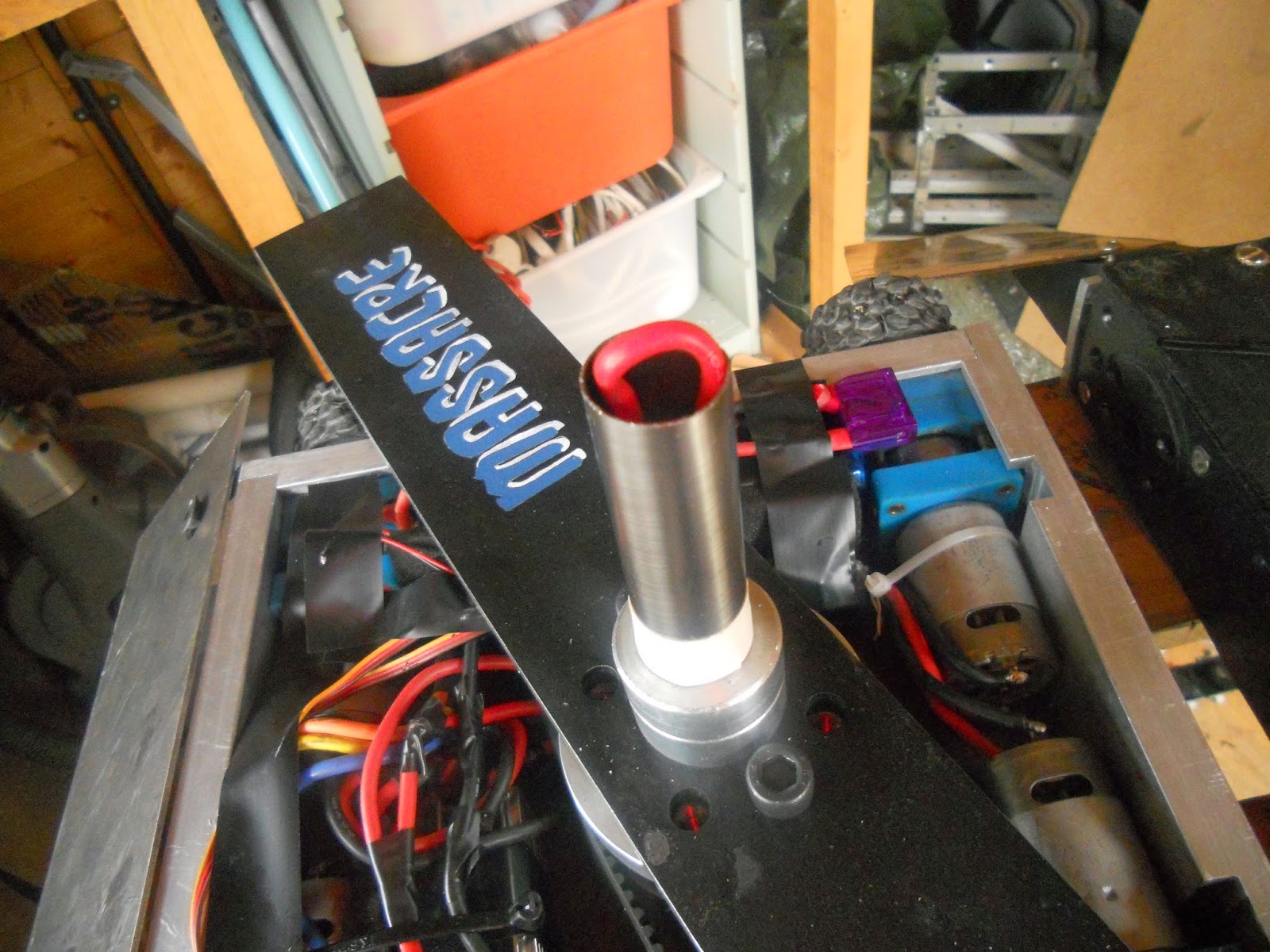 Oh and also at this point the spare bar has been painted up. It feels so weird having a spare of the most expensive part of the robot (maybe it was expensive because I got a spare) 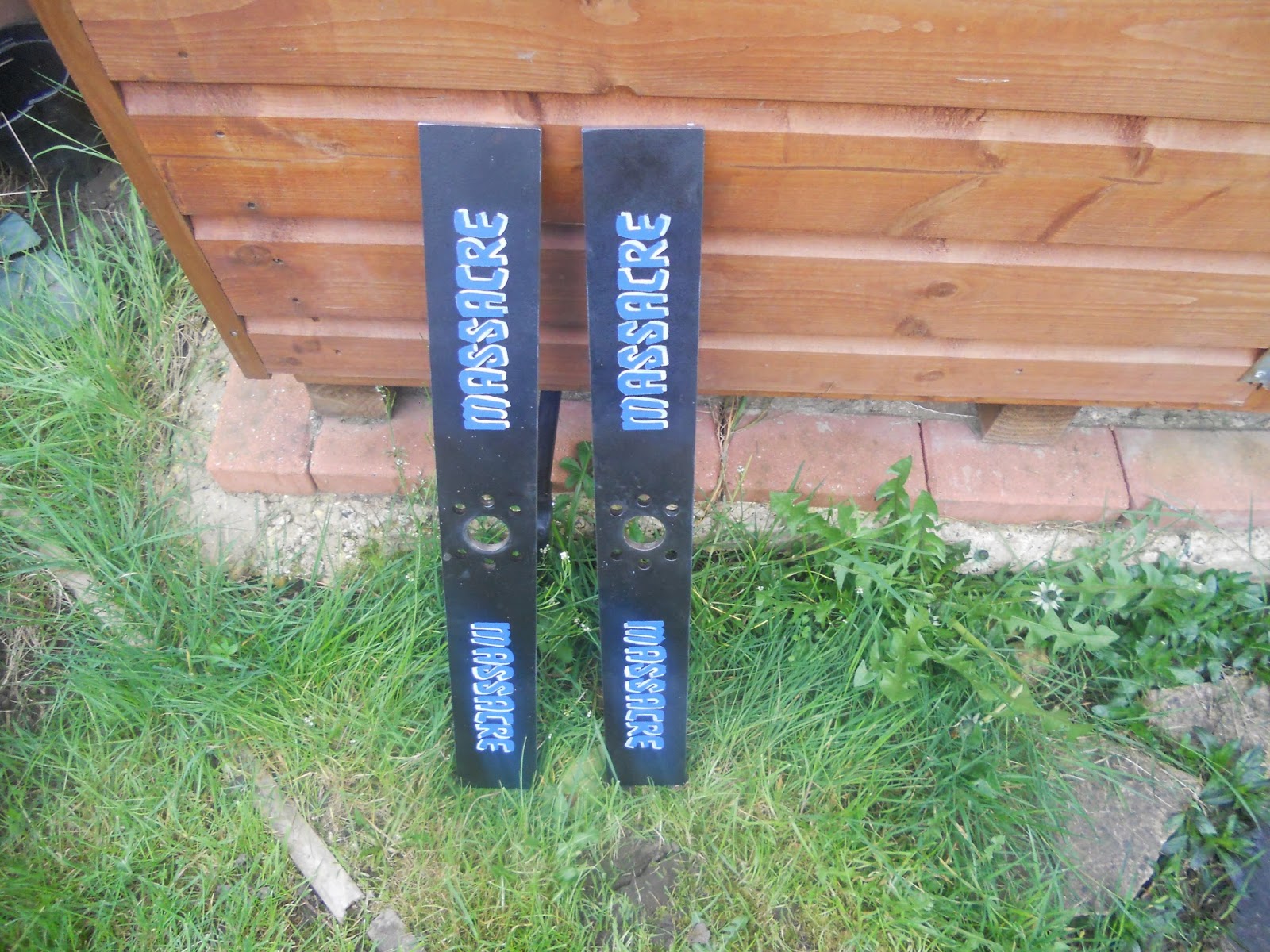 Now came fitting the top cover. Slight cockup here as I moved the  weapon assembly backwards about 30mm or so in order for me to actually have space to put electronics and ting. This meant the top had the hole in the wrong place. Solution, chop it up. This kinda ended up being a good thing because it means I can take the top cover off and poke the internals while leaving the weapon bar still physically attached to the robot.  Go Go Gadget marking out skillz! 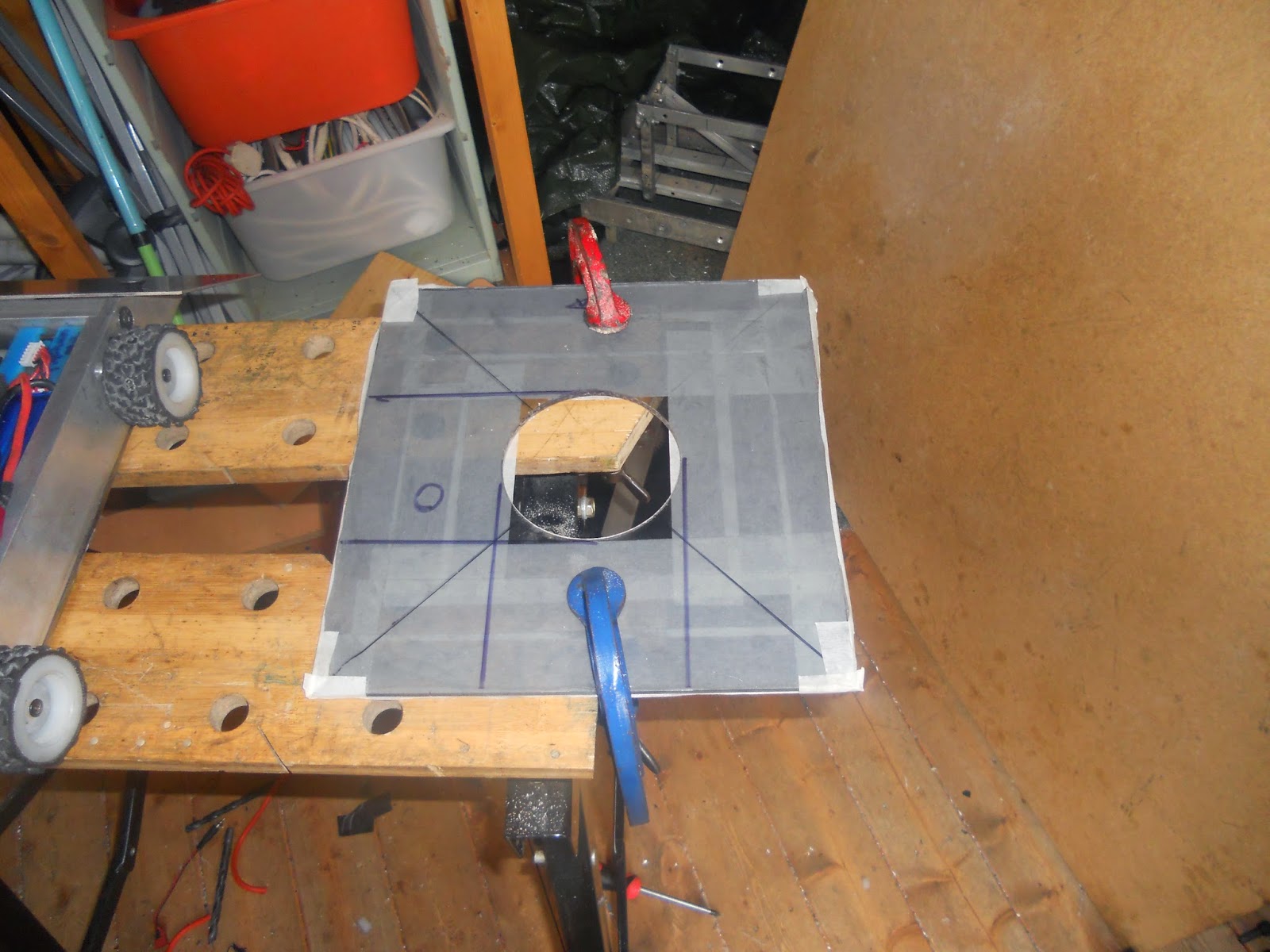 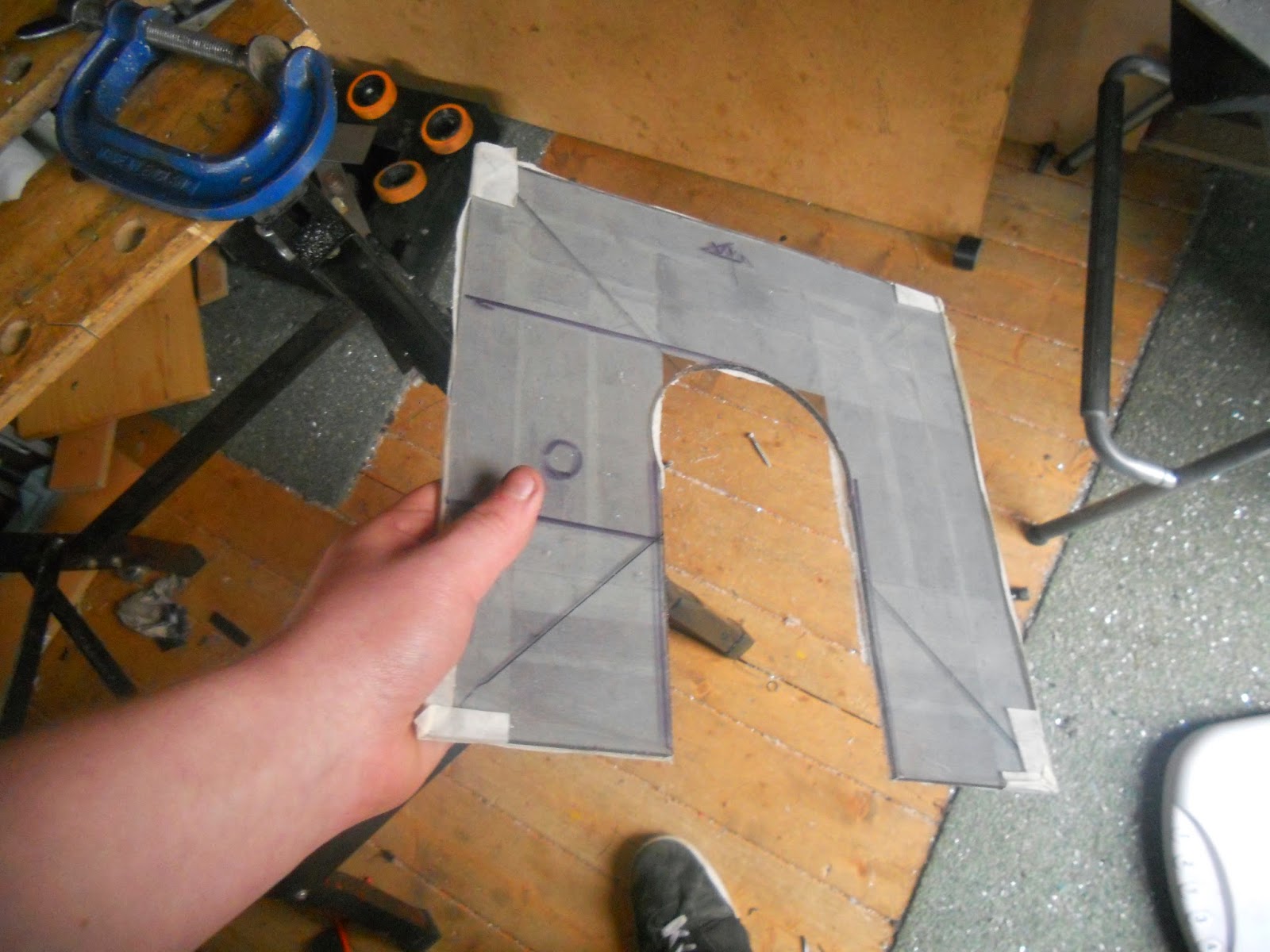 I neatened this up and Bored the hole for the flange of the Open Ranglebox to sit through. Bored a 26mm hole for a 17mm flange as better safe than sorry. 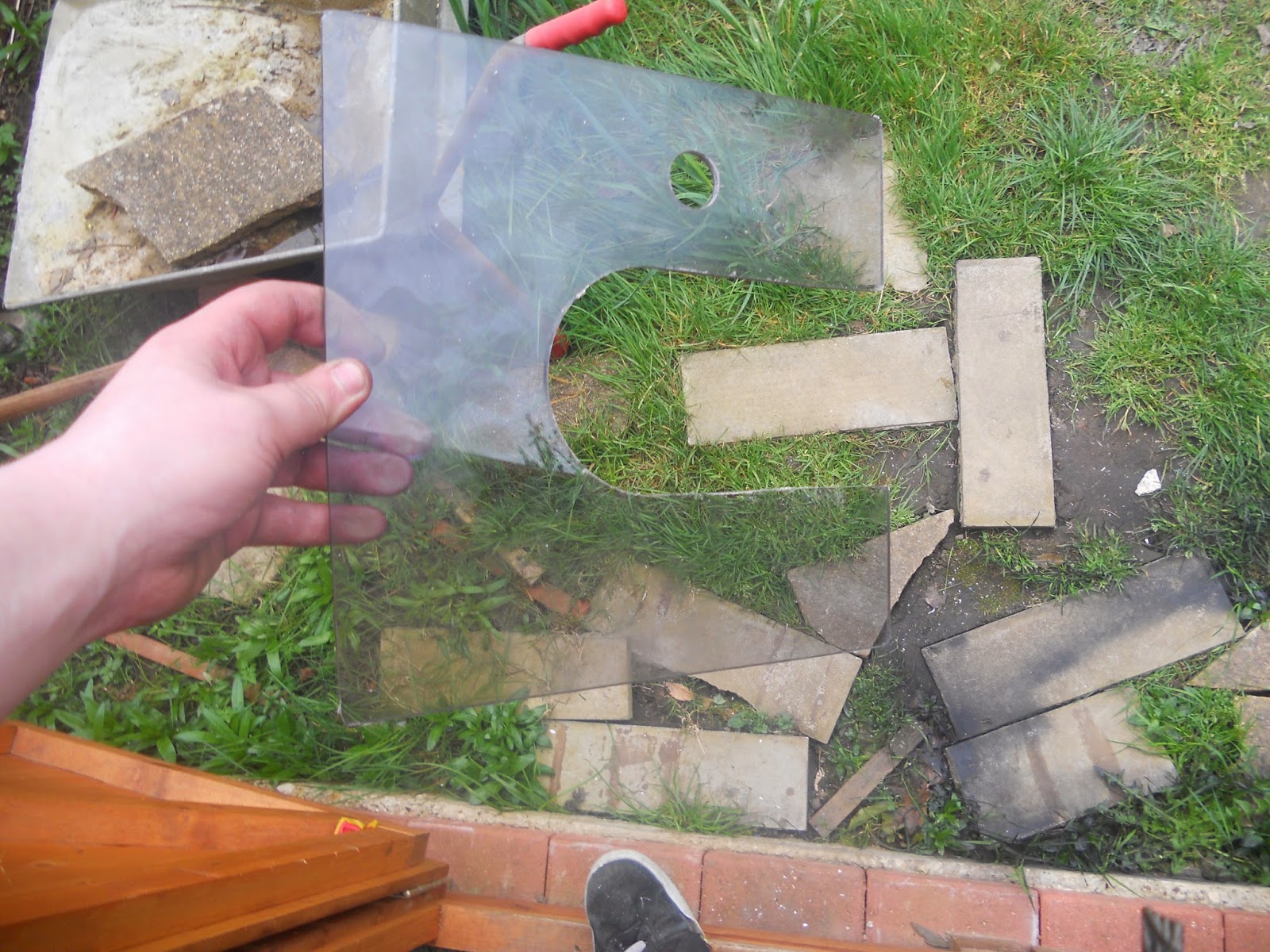 I like polycarbonate.  I then stuck a couple of the holes through it, and drilled and tapped holes in the frame and Pretend-O'd it all together. It sticks up at the back because reasons that we will come to later (spoiler, its because I'm dreadfully n00by still) 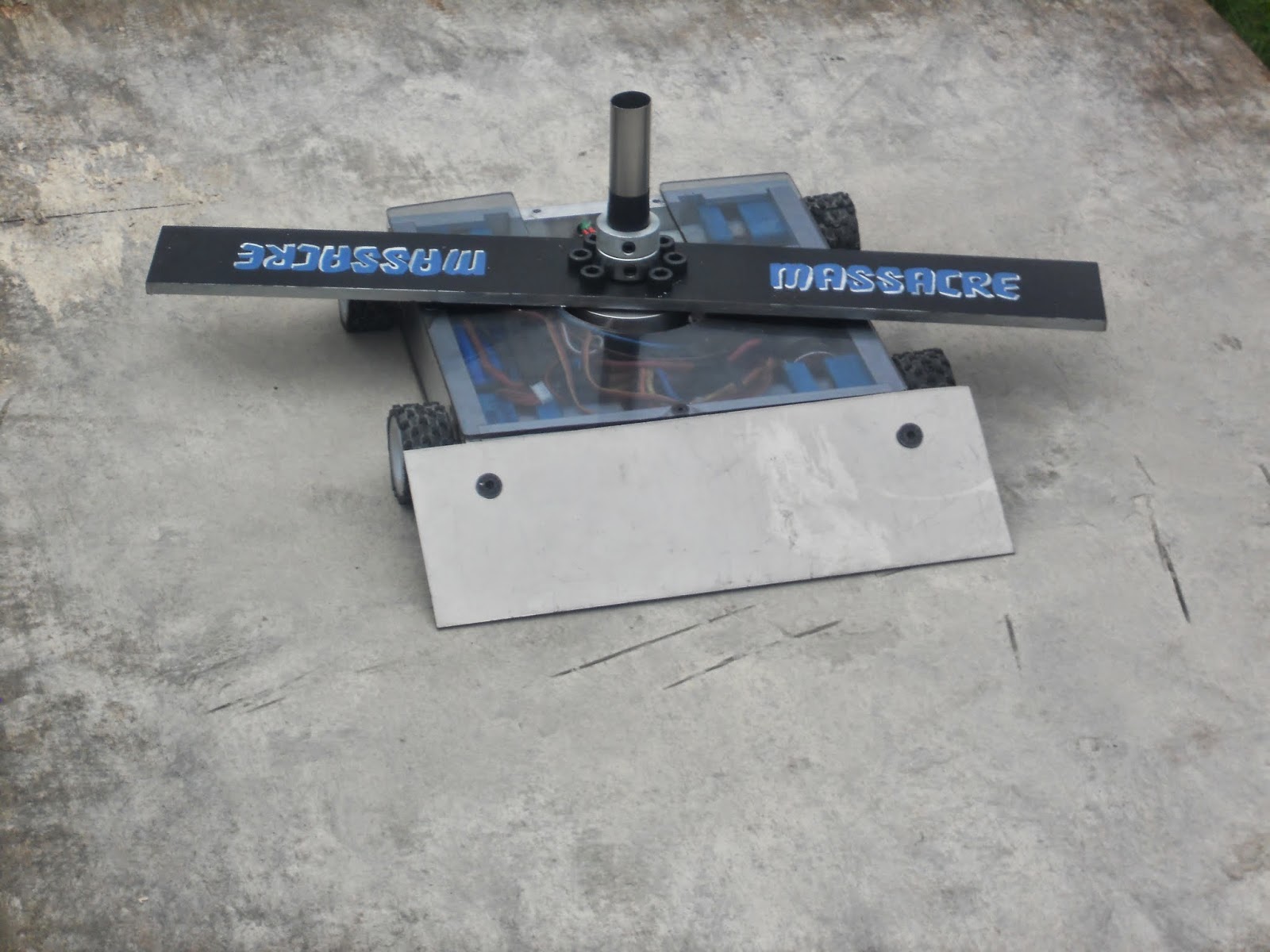 No banana for scale, so have an 73mm Banebots wheel instead. 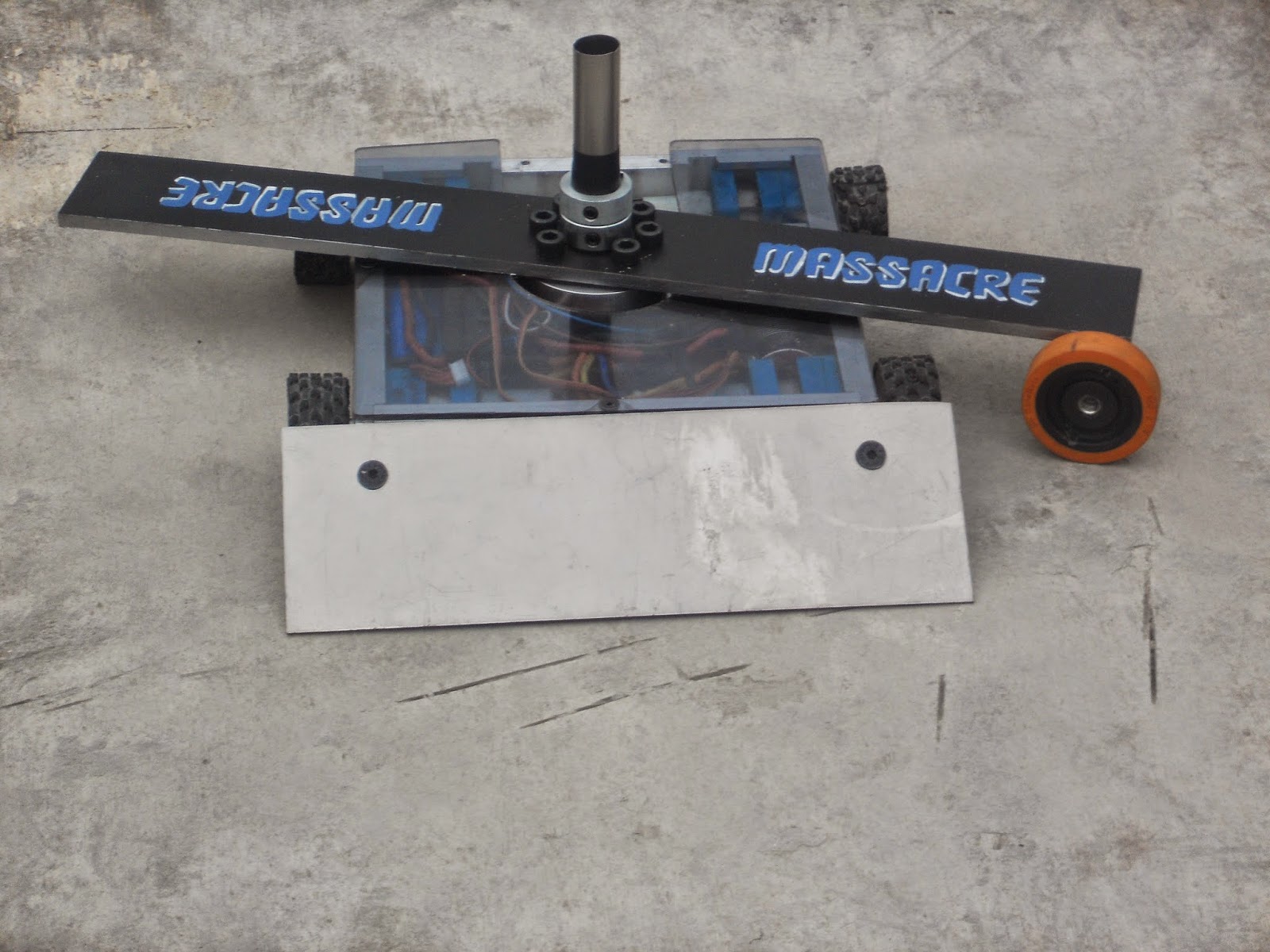 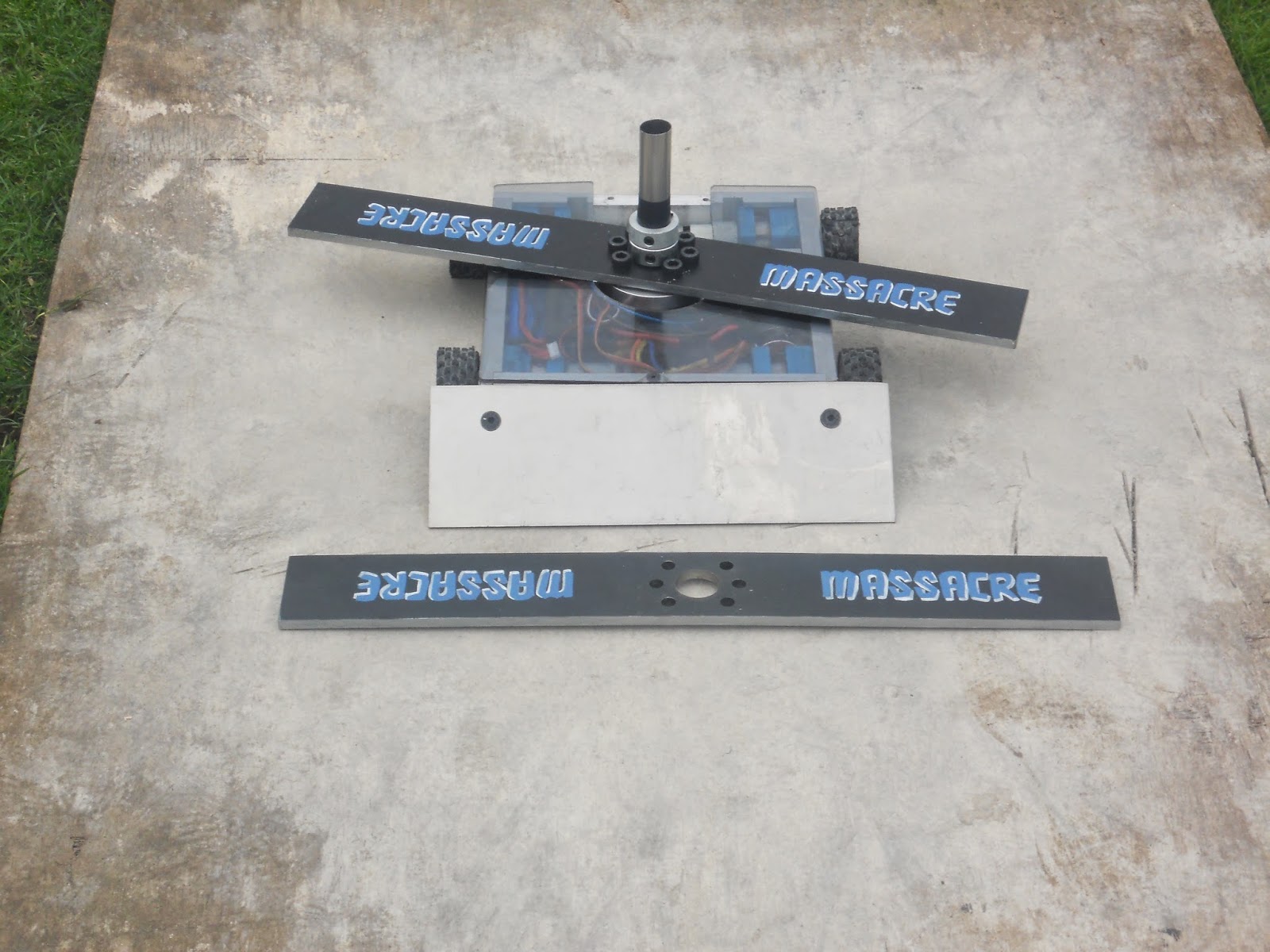 HAVING A SPARE BAR FEELS SO GOOD DAMNIT. 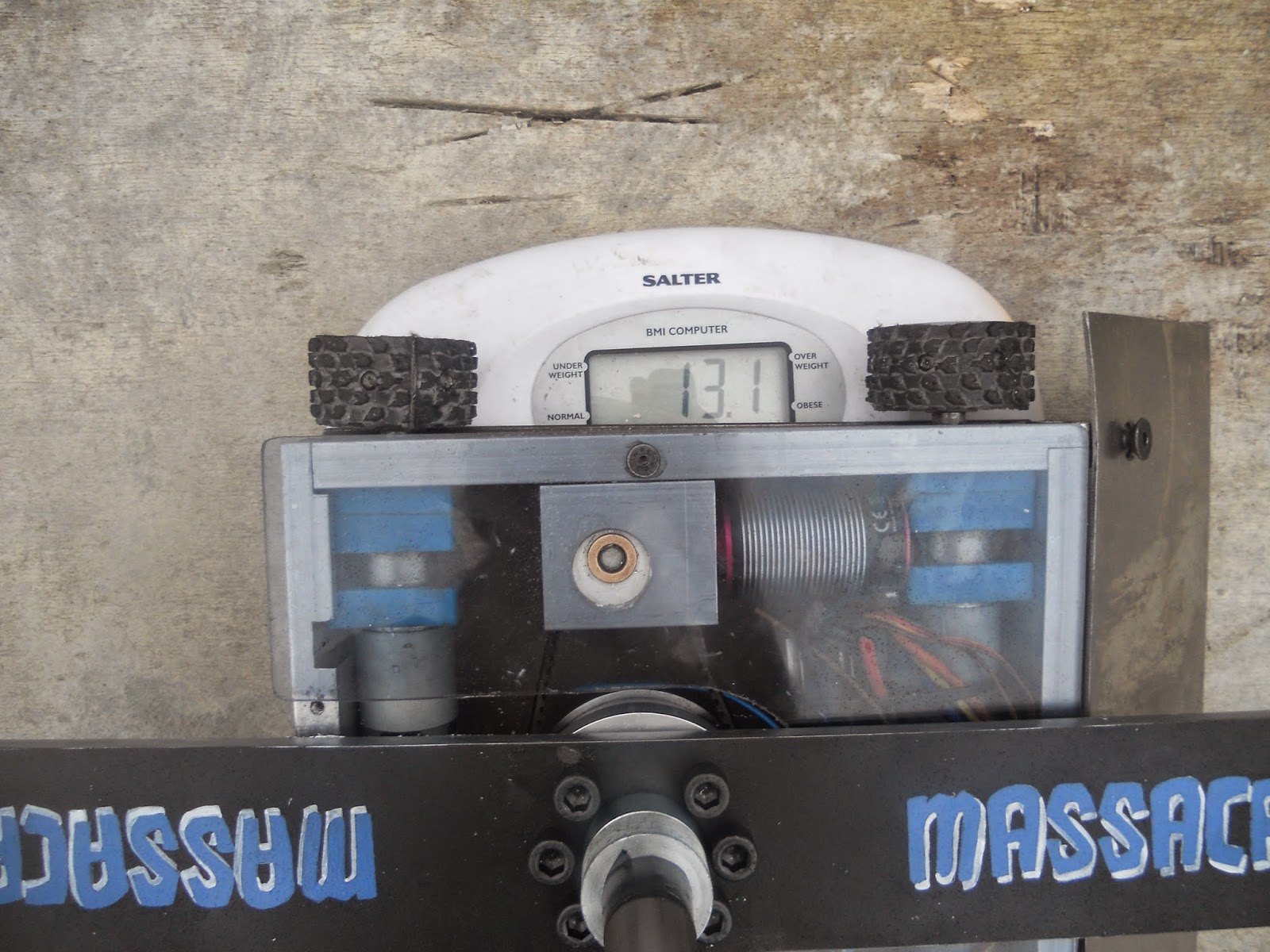 Stuck it on a scale. 13.1kg. The weight limit is 13.6kg which is 30lb, I'm not going to try and make it up to weight as I think 500g tolerance is about right for this dubious scale of unknown accuracy. It puts me at about 96kg so its kinda sorta accurate (I'm a heavy guy) Anyway I had like one 100 by 50 by 4mm thick bit of polycarbonate still to add so no big deal. 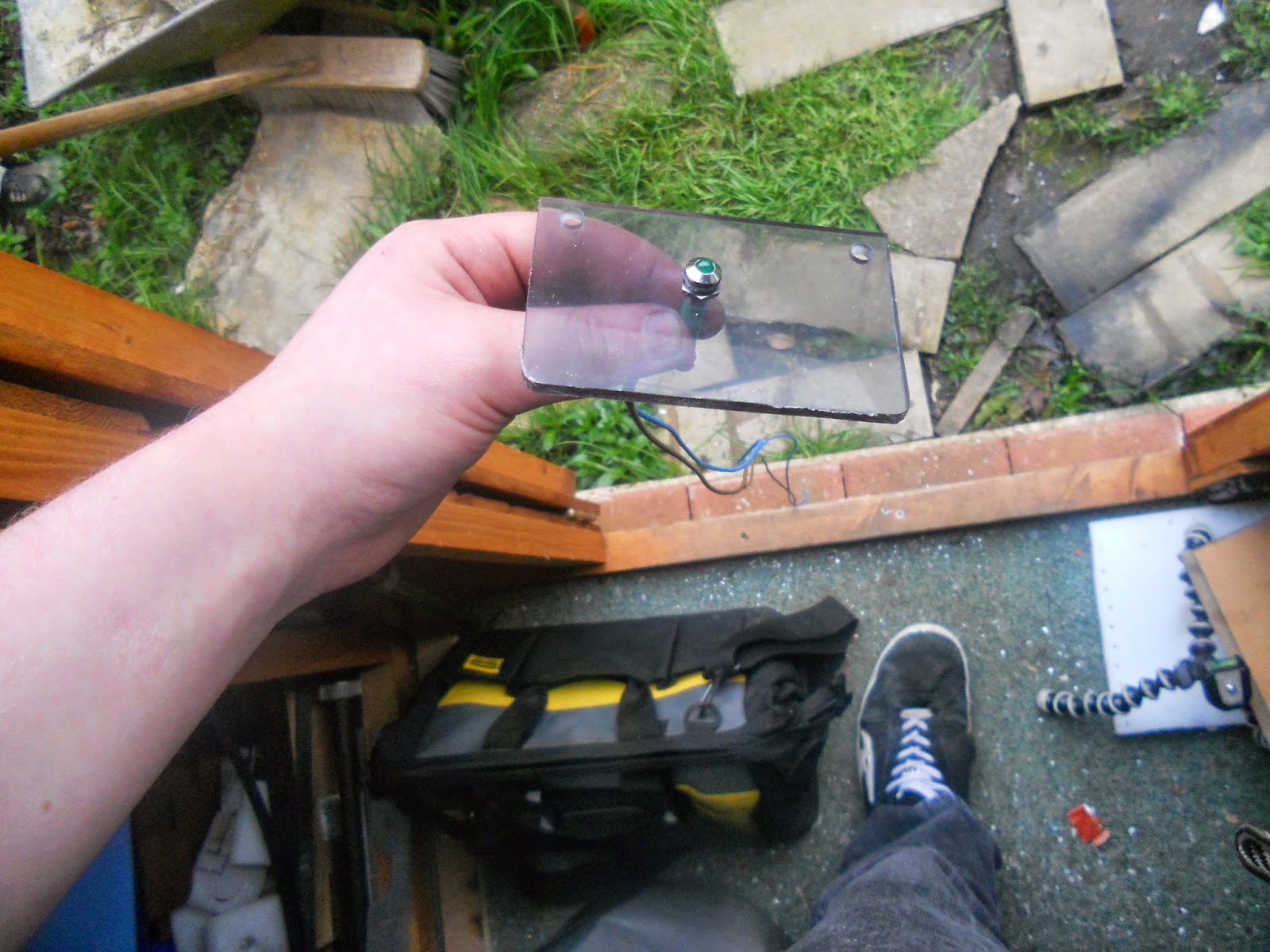 The bit of polycarbonate in question. This peice was a total disaster. I didn't think it through. The bar hit the LED and the holes were in the wrong place. I AM NOT A CLEVER MAN OKAY. I solved this by drilling a hole in the back of Massacre and mounting the LED there... 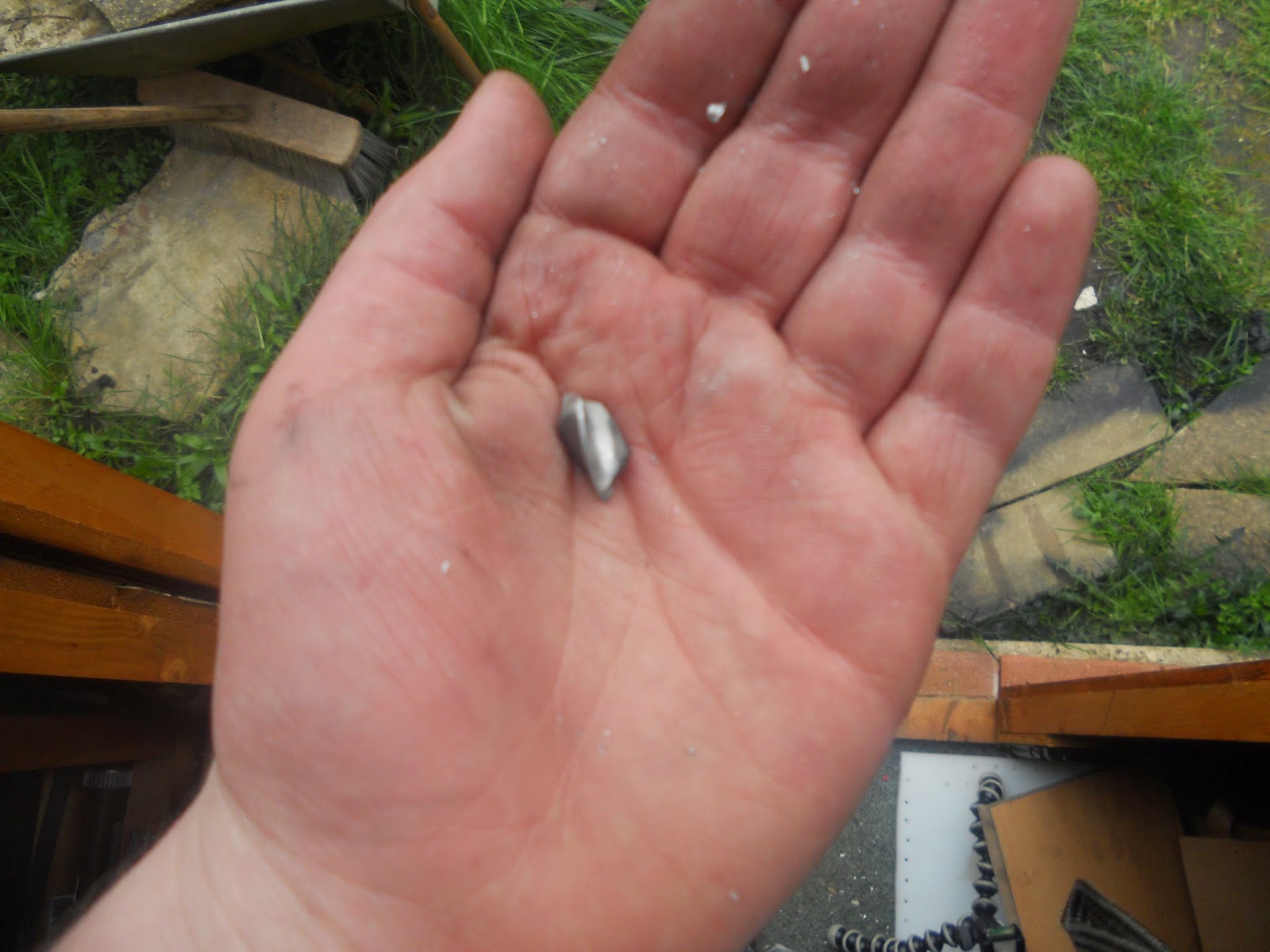 Damnit drill bit you had one job! I nearly got through the whole build without broken drills or taps and then i go right ahead and break one on the last hole. And it was 8.5mm as well. How does one even logic? 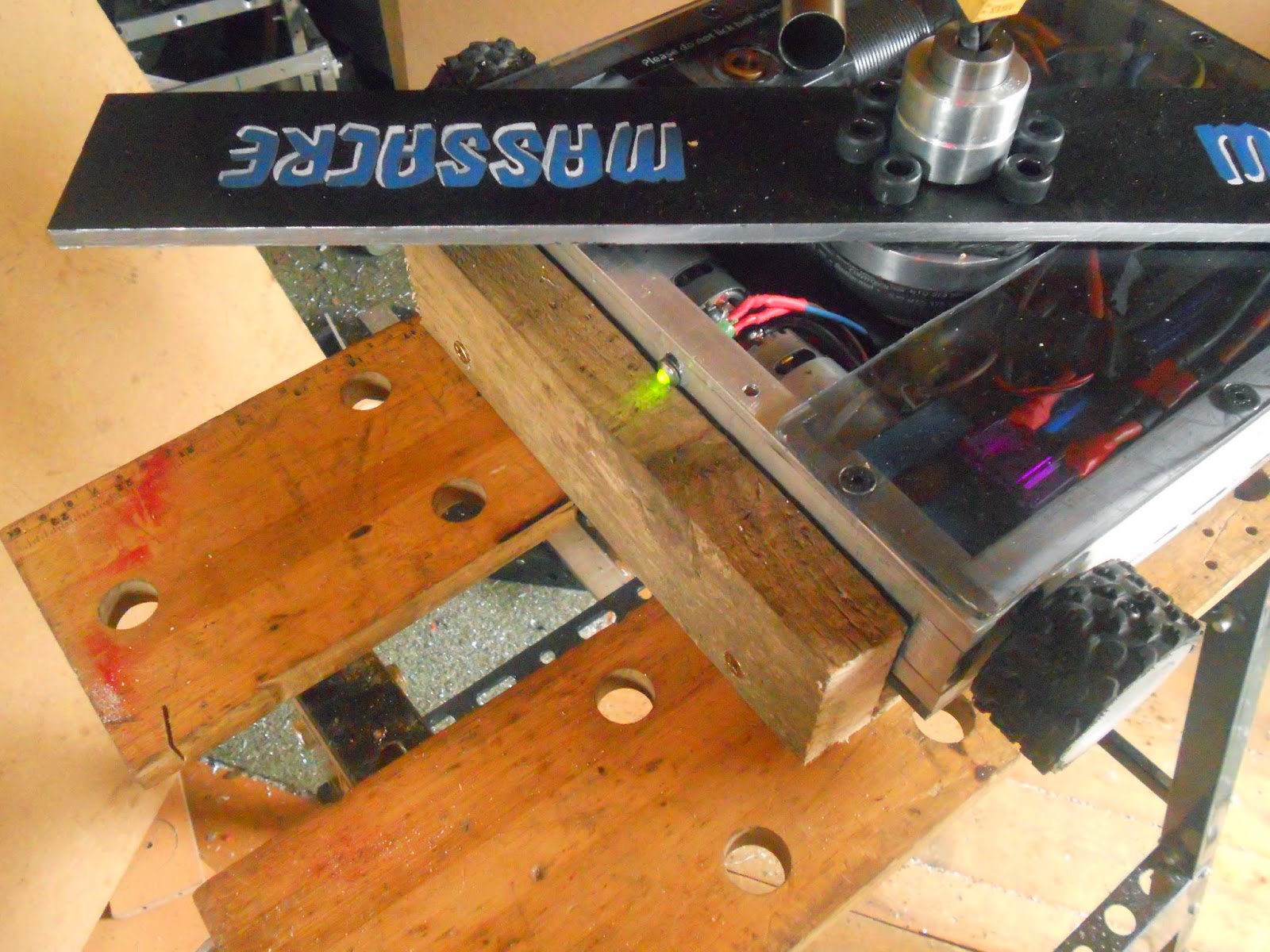 Yay power light of eternal excitement! Then there was only the question of the small 100 by 500 hole at the back of my robot. In the end I cut up a bit of black HDPE of the same thickness and shoved it in there as I'd run out of polycarbonate 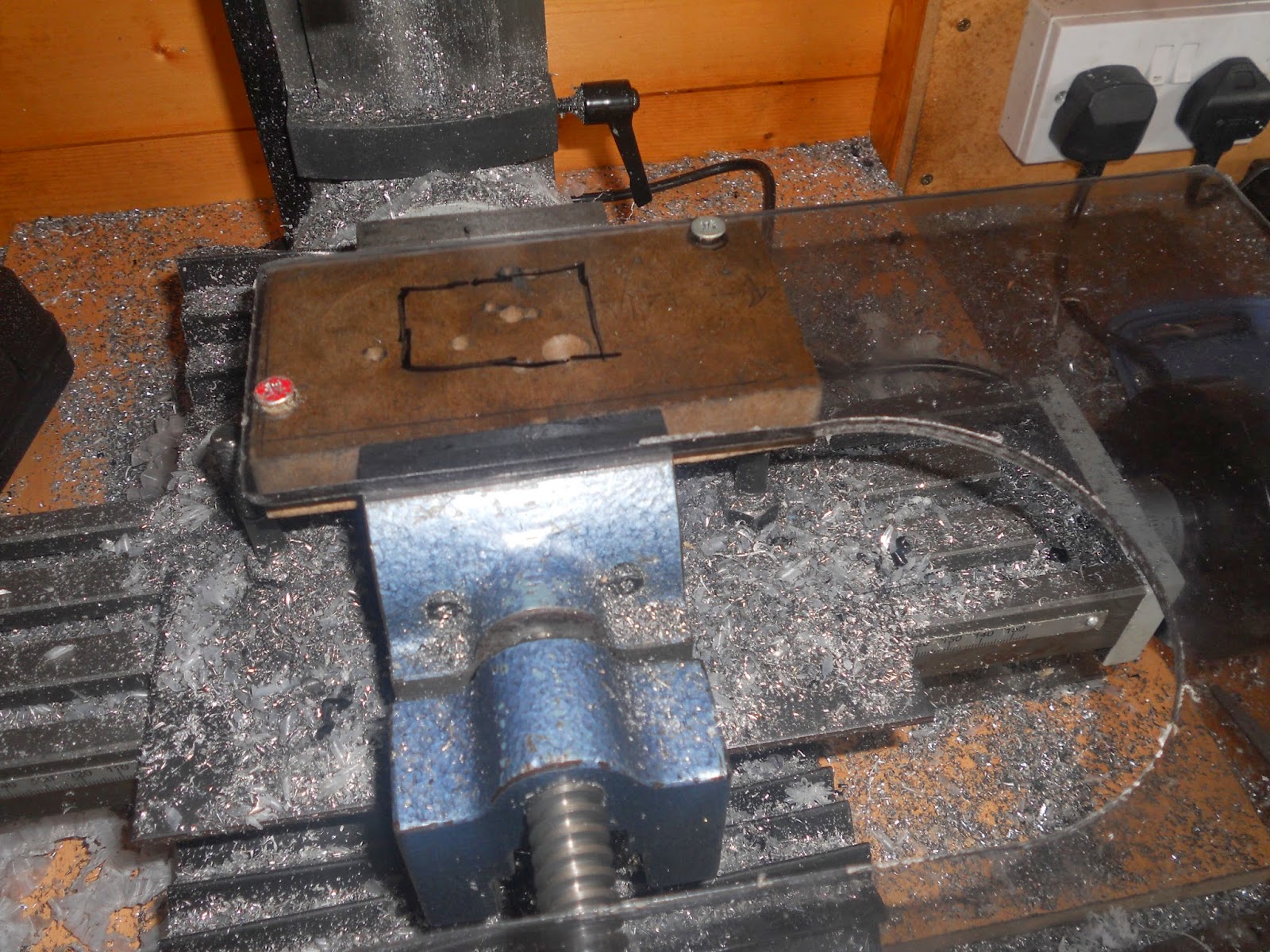 Harry.... wut r u doin...
Yeah okay I'm slightly milling a pocket in the top panel because the fuse is about 2mm too tall for the frame. I'm not the best at this designing things lark. 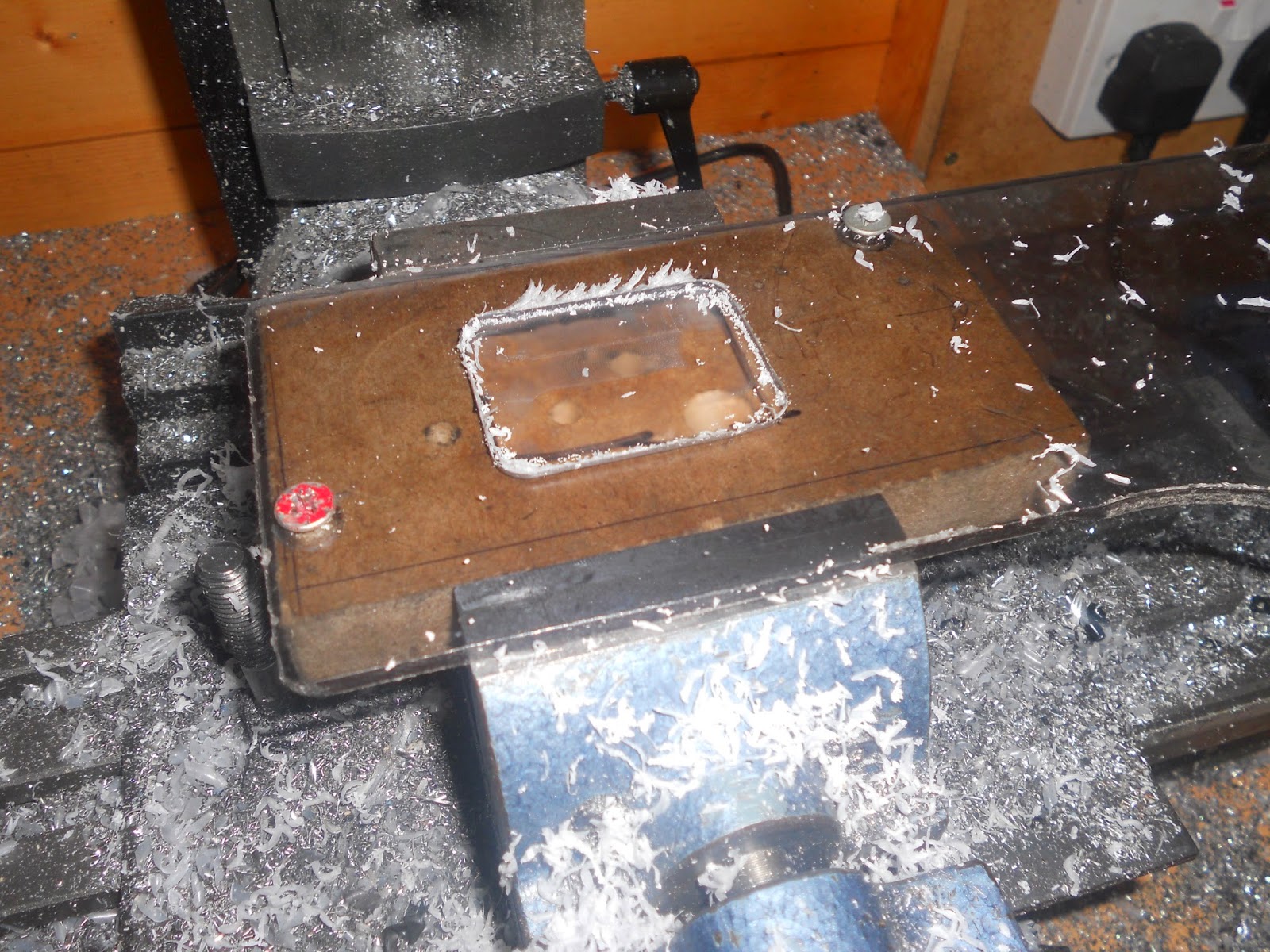 Pocket milled. Was pretty painless. Please take your time to appreciate my wonderful MDF and screw setup for holding the work piece. I'll never be a machinist. 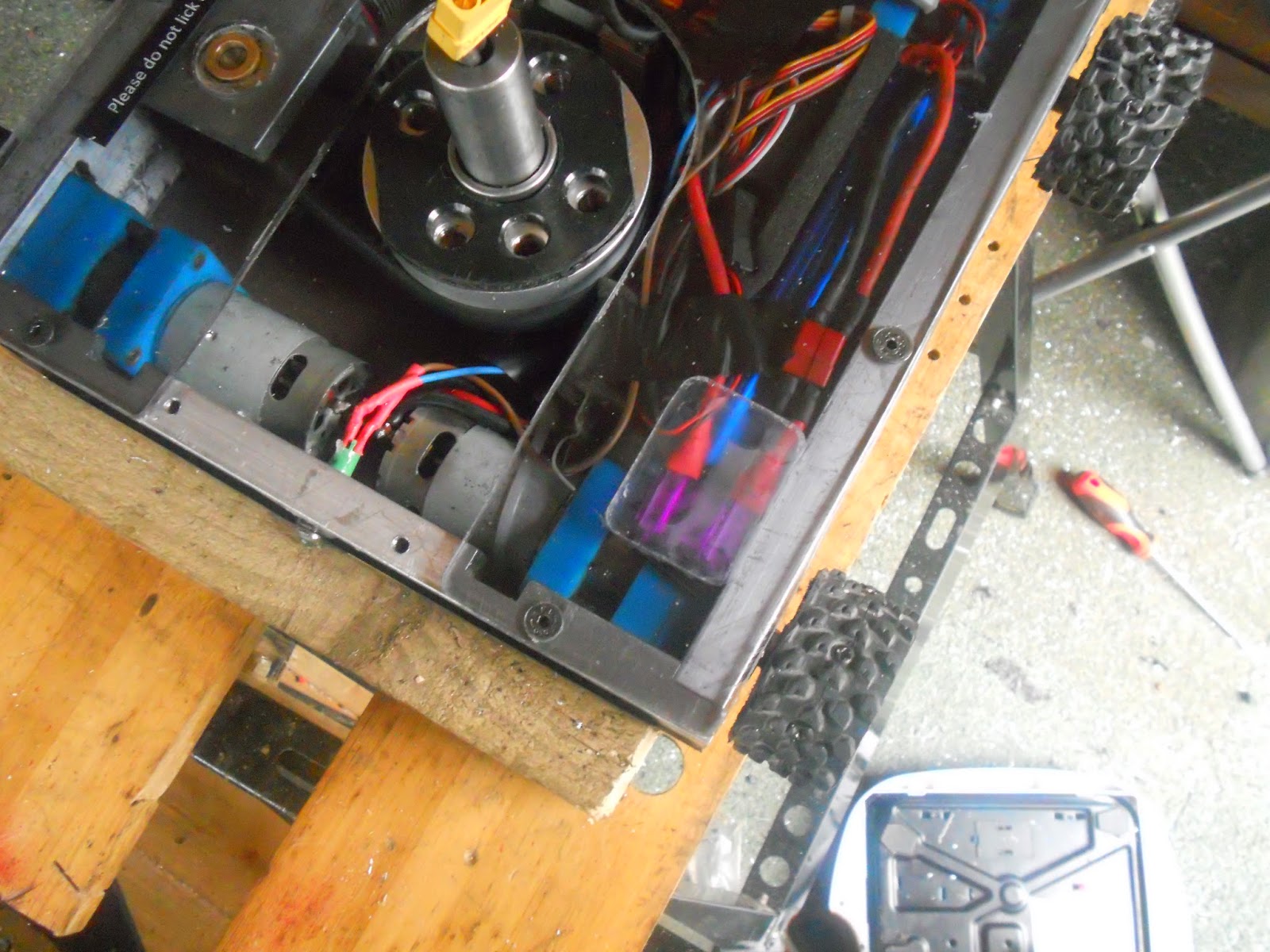 All in place and it works really well considering I did it and I just ghetto hacked it up out of nothing. 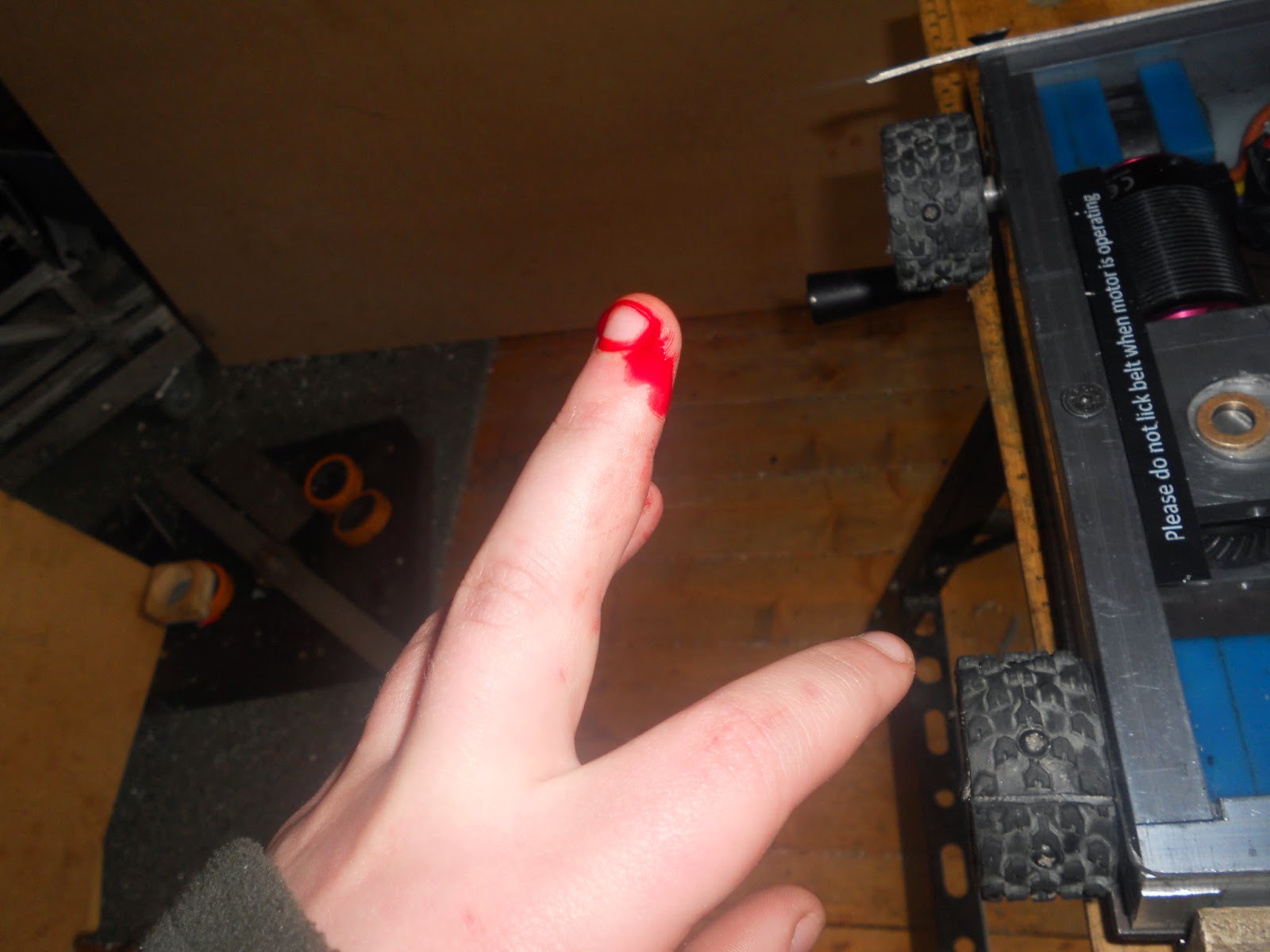 I cut my self quite badly on my middle finger while making the sharp edge protection, oh the irony! Thanks Obama. 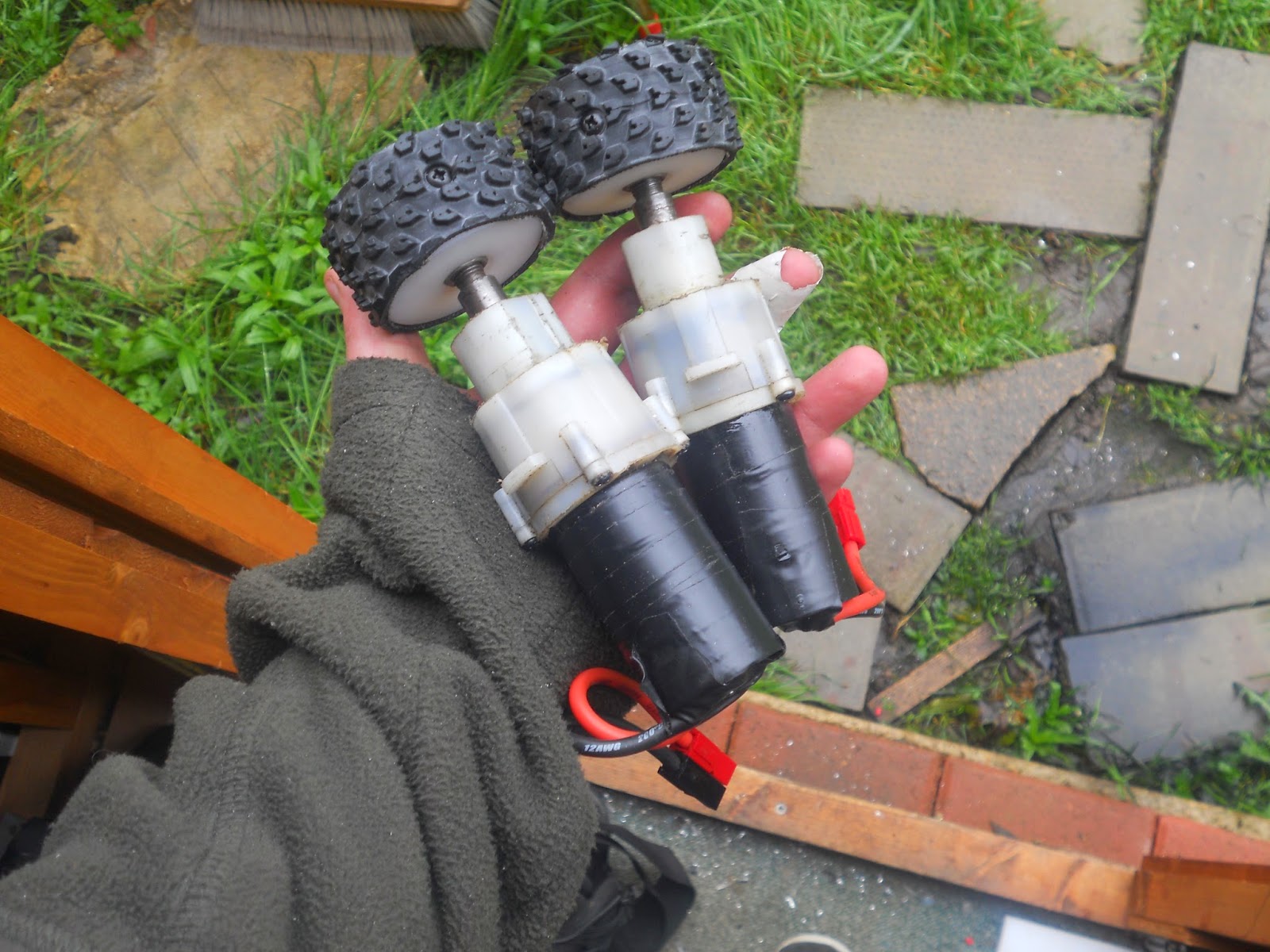 Made up spare wheels and I'm bringing some spare drill motors (my motors have the same internals but much nicer CNC milled nylon casings) These are the first pair of drill motors I bought. Bit like Trigger's broom as they have had new motors and a couple new gear sets but still. 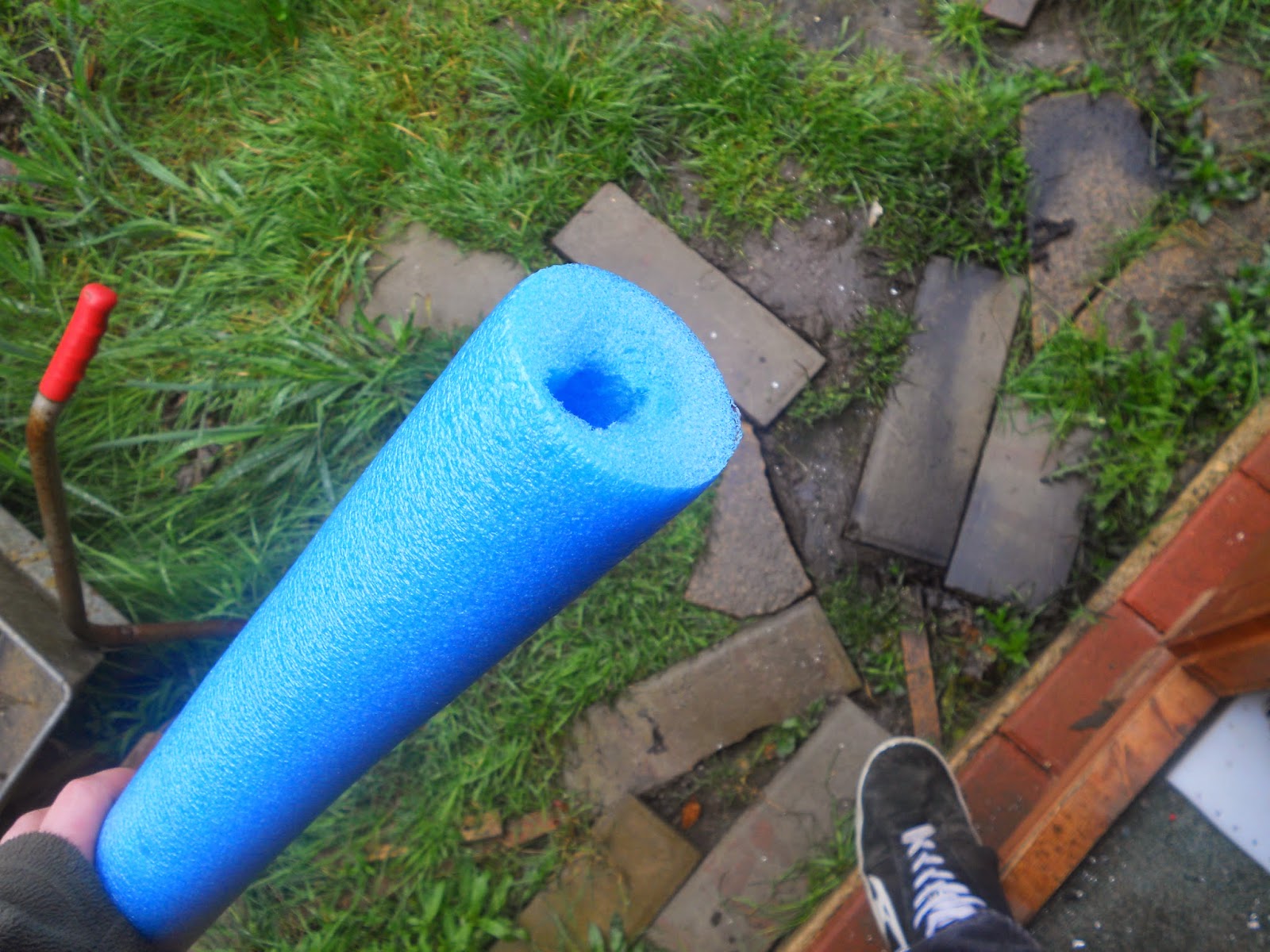 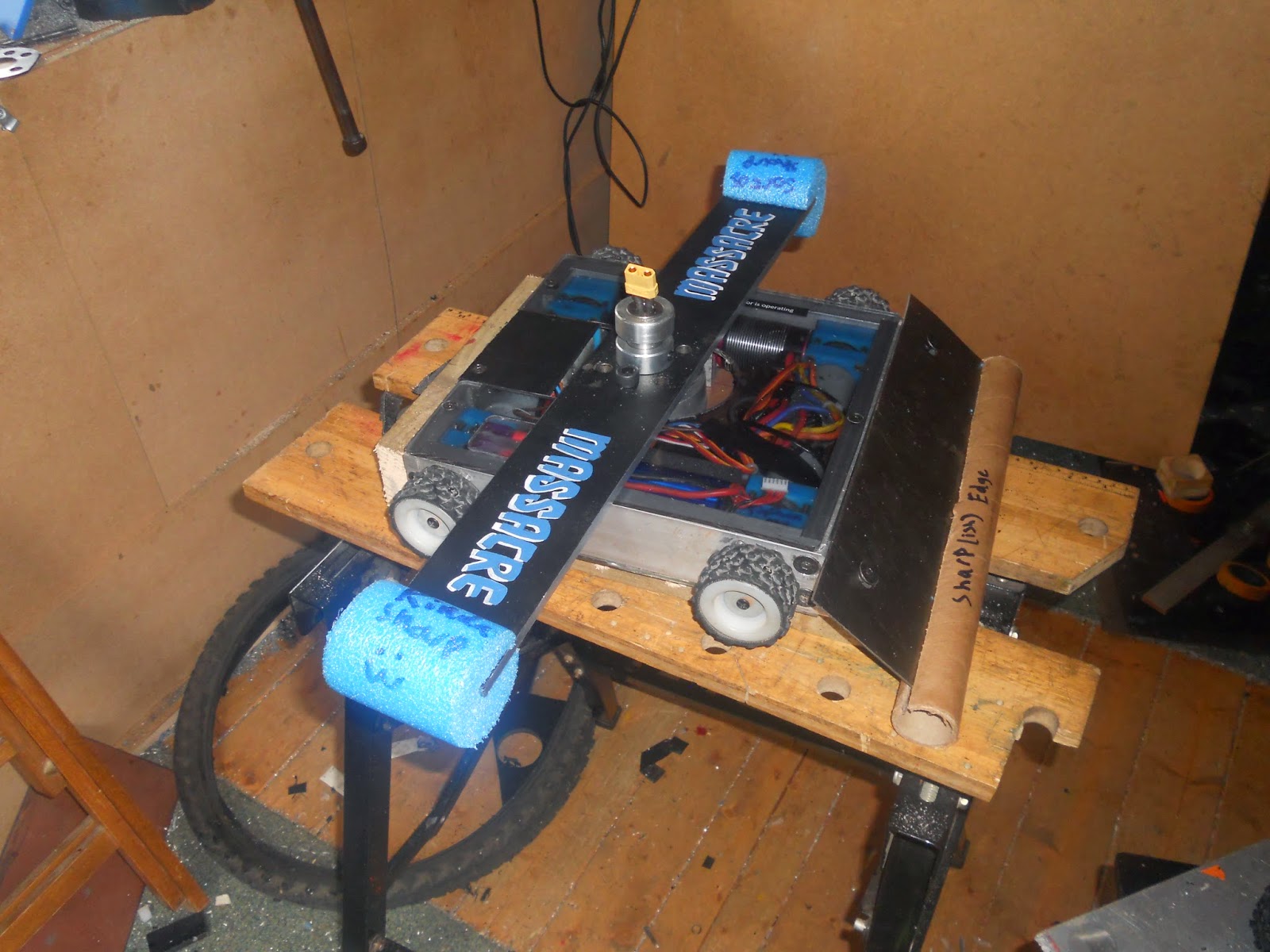 Protection for the bar. Its not sharp, but I would get in trouble if I didn't have protection on it. 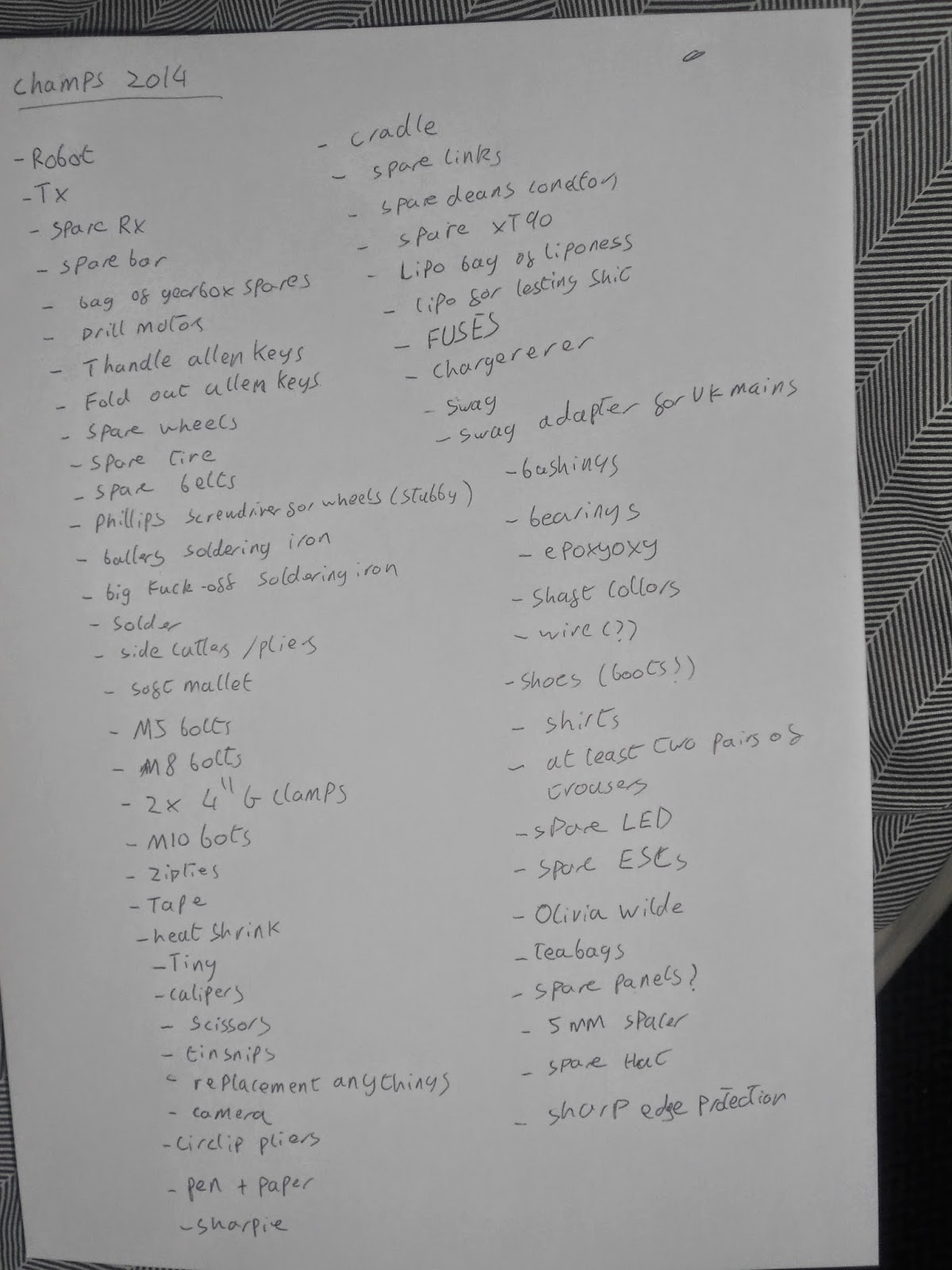 I made a semi legit list of things to take, as it is a longer competition and I'm looking after my self and Massacre from Wednesday through to Sunday. I found most of my tools then relocated to my bedroom where I set up base camp alpha for a sort of forward command type affair with regards to packing. 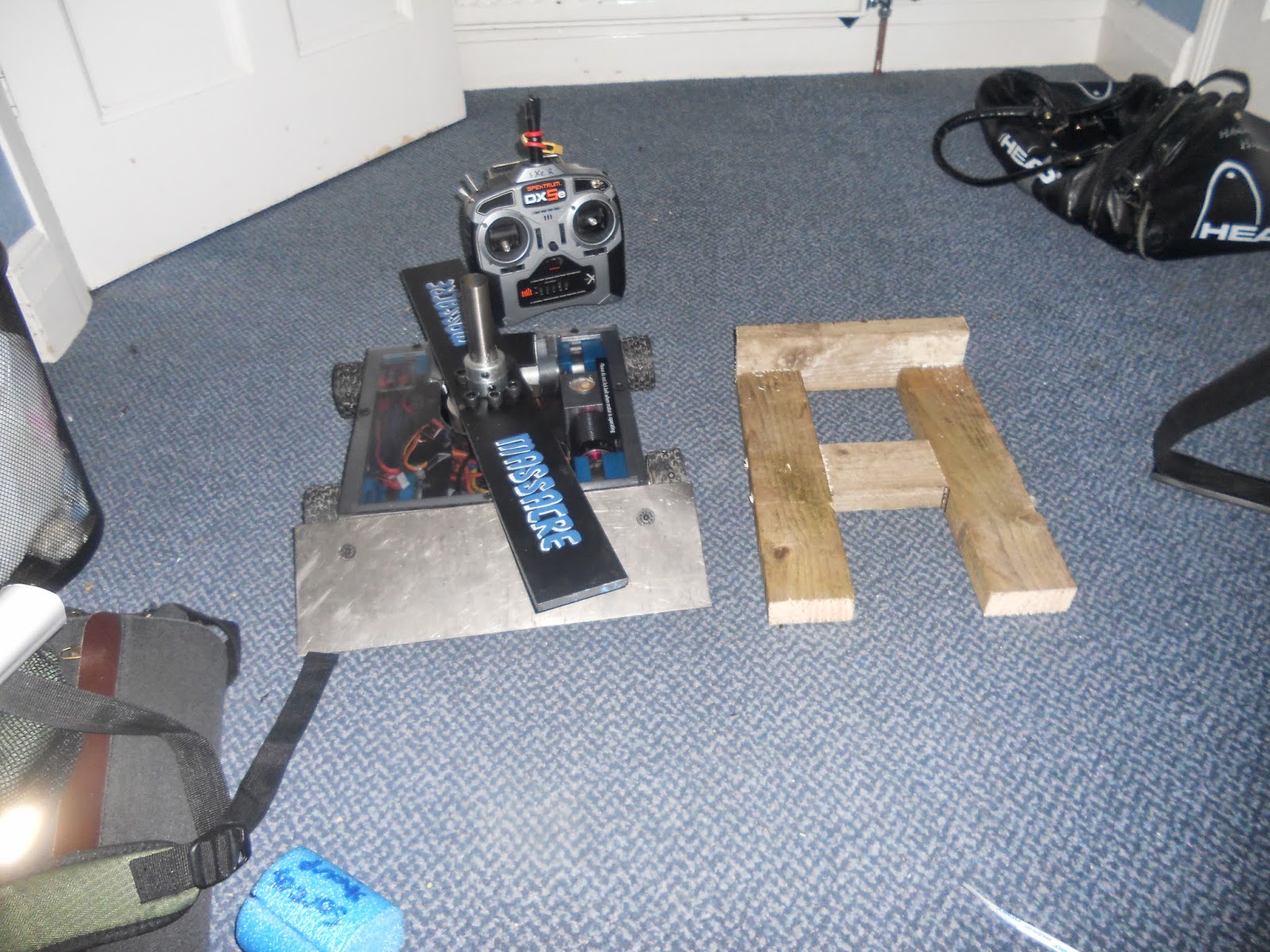 Showing off the cradle I made for massacre to sit up on while its in the pits area. 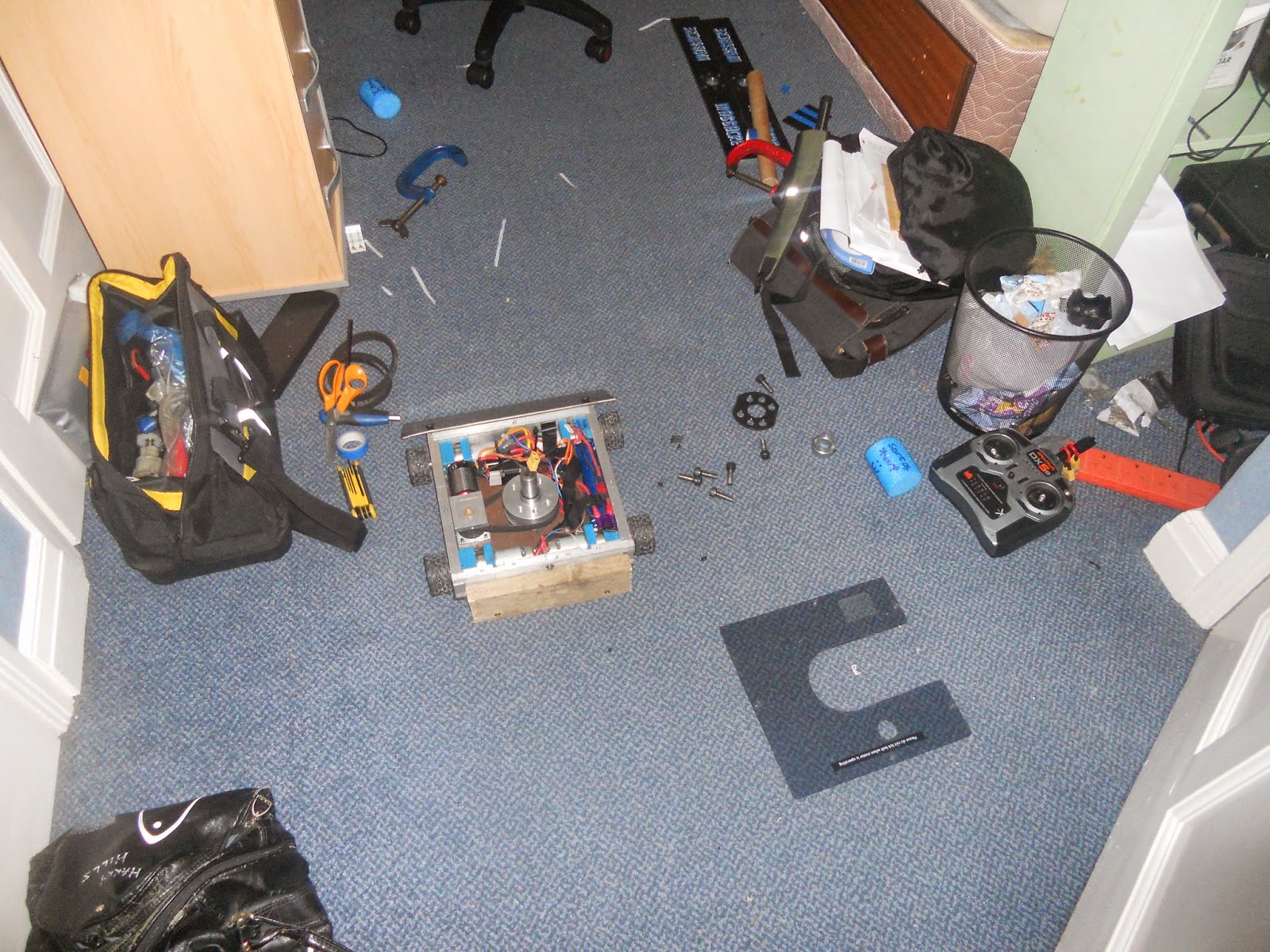 Its probably not a good thing for it to look like this late in the game! I opened up to see if I could cure failsafing problems. Luckily enough someone offered to lend me a RX. I love this hobby, the guys will fuck your shit up in a major way then help you fix it, or will help you fix up your robot in order for them to fuck it up! 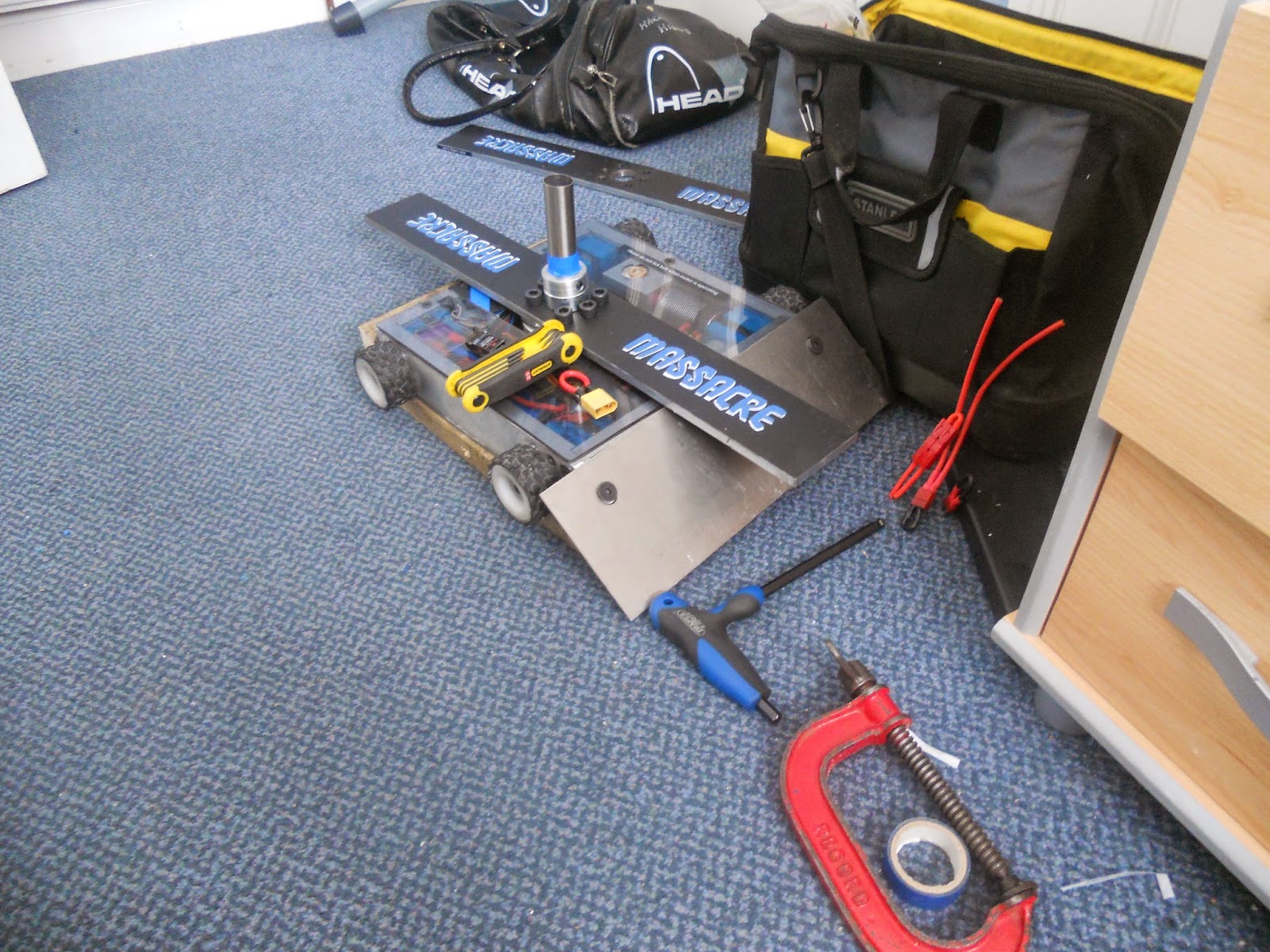 This morning, Massacre looking more complete than before, mostly because it is. G clamp is the locking bar. 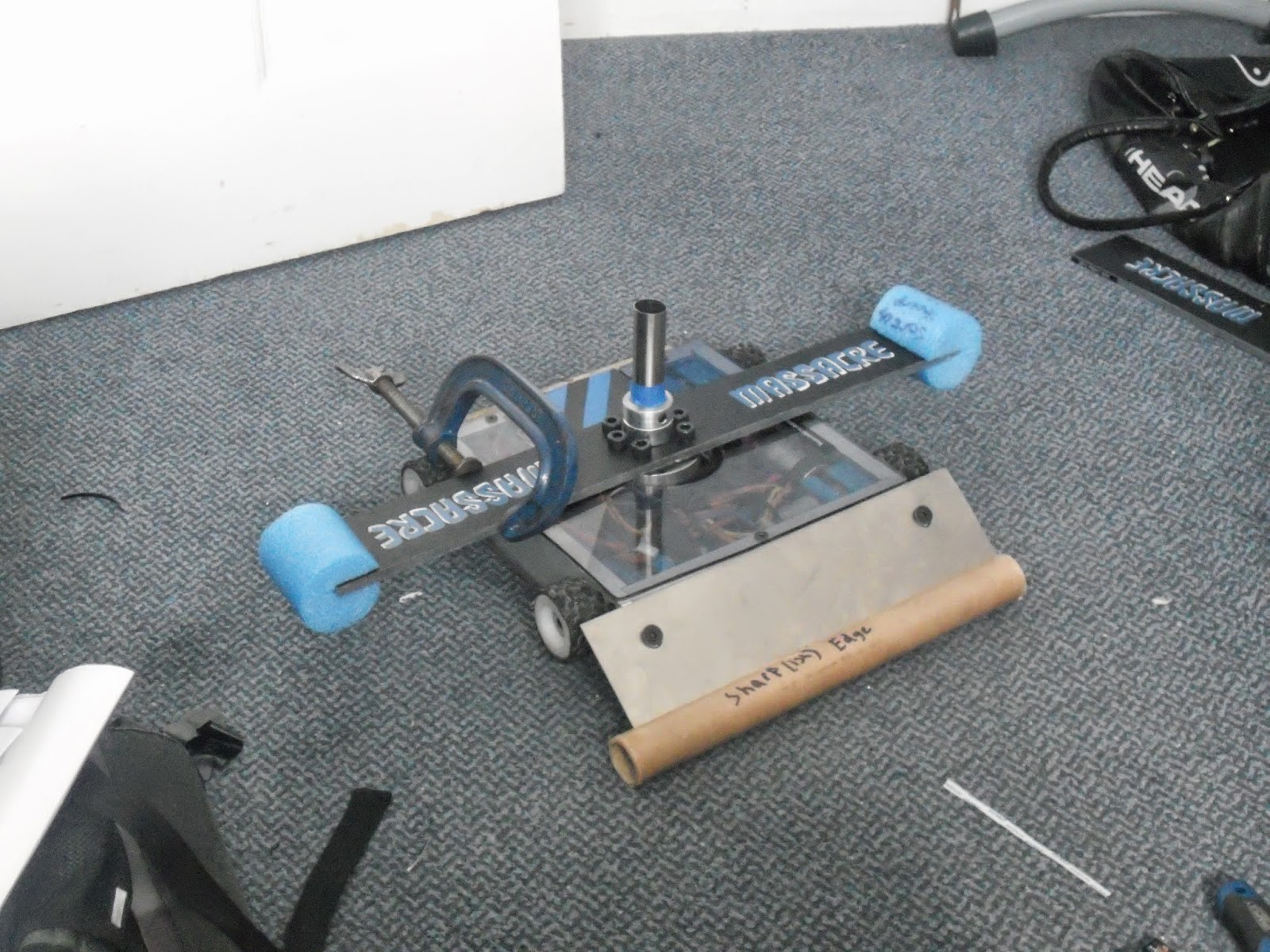 With all the safety shit on. 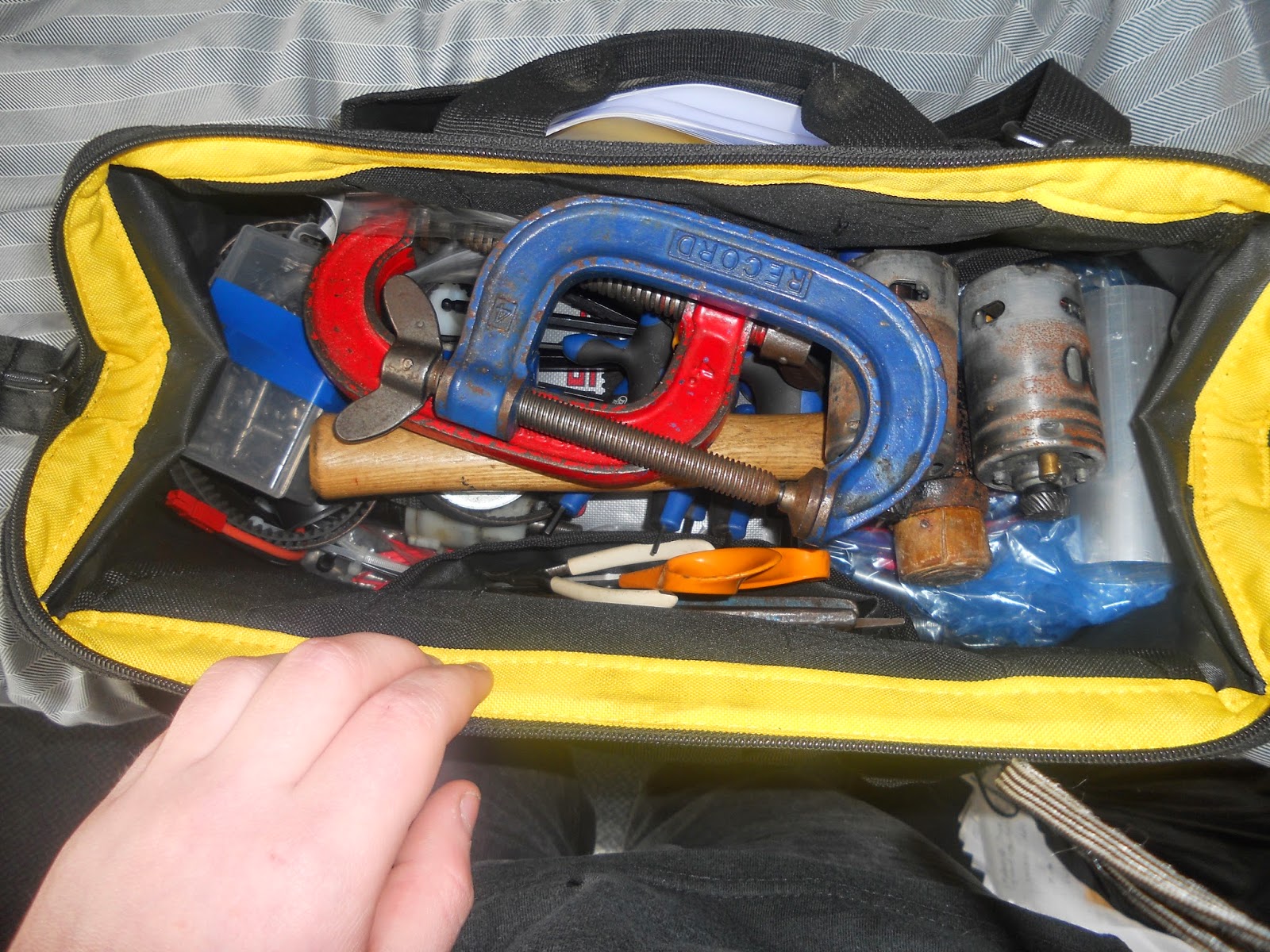 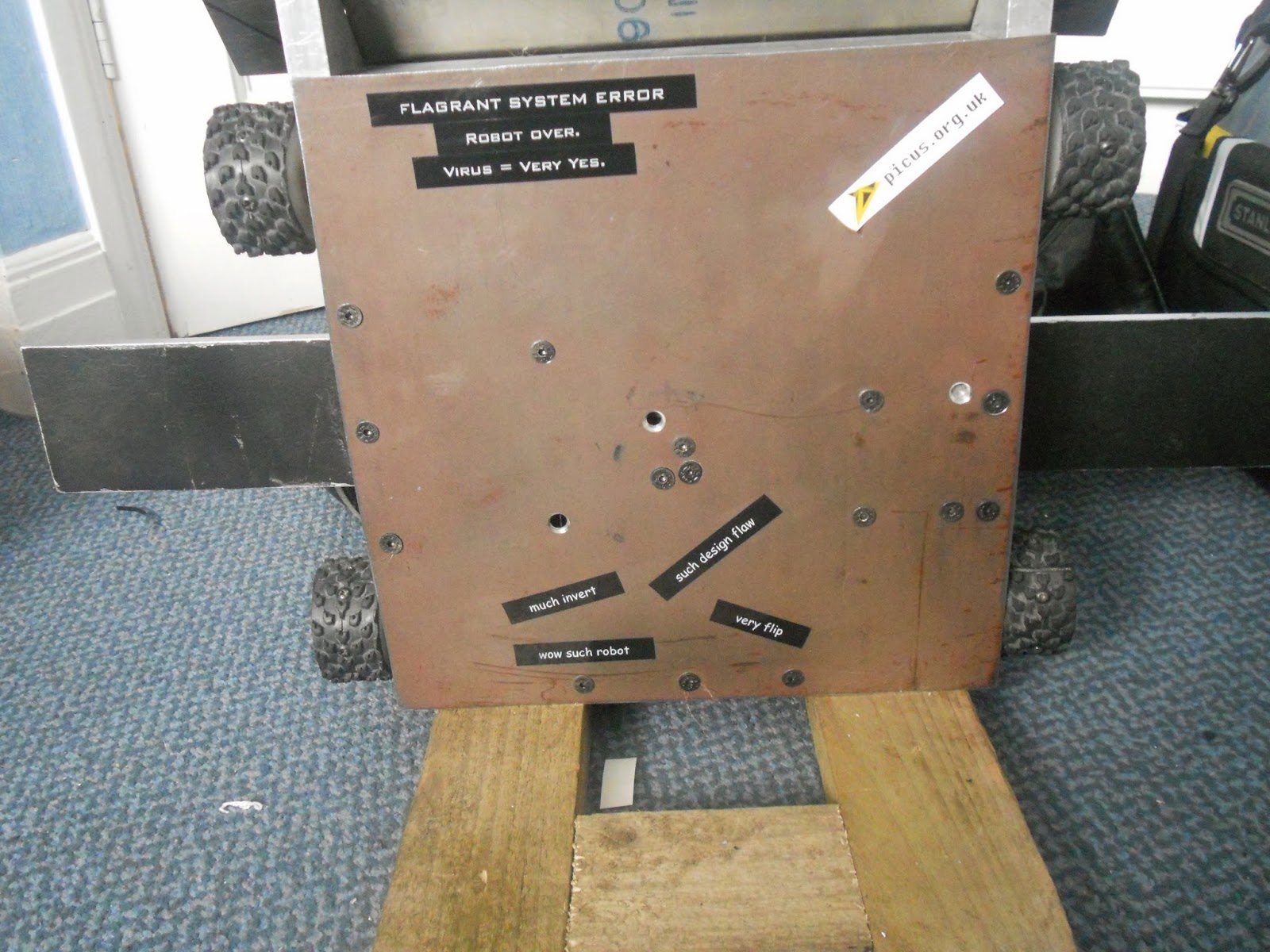 And a bit of decoration is added to the baseplate because label maker and reasons! (the bolts that are missing from the base are supposed to be missing.... Yay incompetence)


That's really about it. I head up and meet Ellis and Pete Ware and I'll be going up with them. Ellis's robot has had some real problems as it turned out he had designed his drive system around a particular set of motors, and only a few days ago he found out that the spec he had been given was totally wrong. Such a shame as after all that planning it was something totally unforeseeable that was the biggest cock up. I hope we can poke it into a better working order as its a fantastic robot and Ellis has the makings of a brilliant engineer.


Final testing video for you. Wish me luck. Probably have a very picture heavy spampost event report about the UK champs!