Brown trousers time. The competition is right upon me!

First in the long line of jobs that needed doing was some more of the wiring, namely the main power leads coming from the battery. UK featherweight rules say that any robot using LiPo batteries needs to have a fuse as a safety measure. Last year I used a fuse holder that would have allowed me to quickly change fuses if I was unfortunate to blow them. Thankfully 4 550 motors spectacularly failed to continuously pull 100a and I never blew a fuse. I blew Drumrolls fuse twice I think causing a stopped robot and a disappointed Jamie. I gave him one of my spare fuses to somehow make up for it. Anyway, my robot is too small for a fuse holder. How the fuck? Eh, hardwiring time. This makes it harder to change out, but I doubt I'll be blowing fuses left and right and its like a fifth of the size and a fraction of the weight. 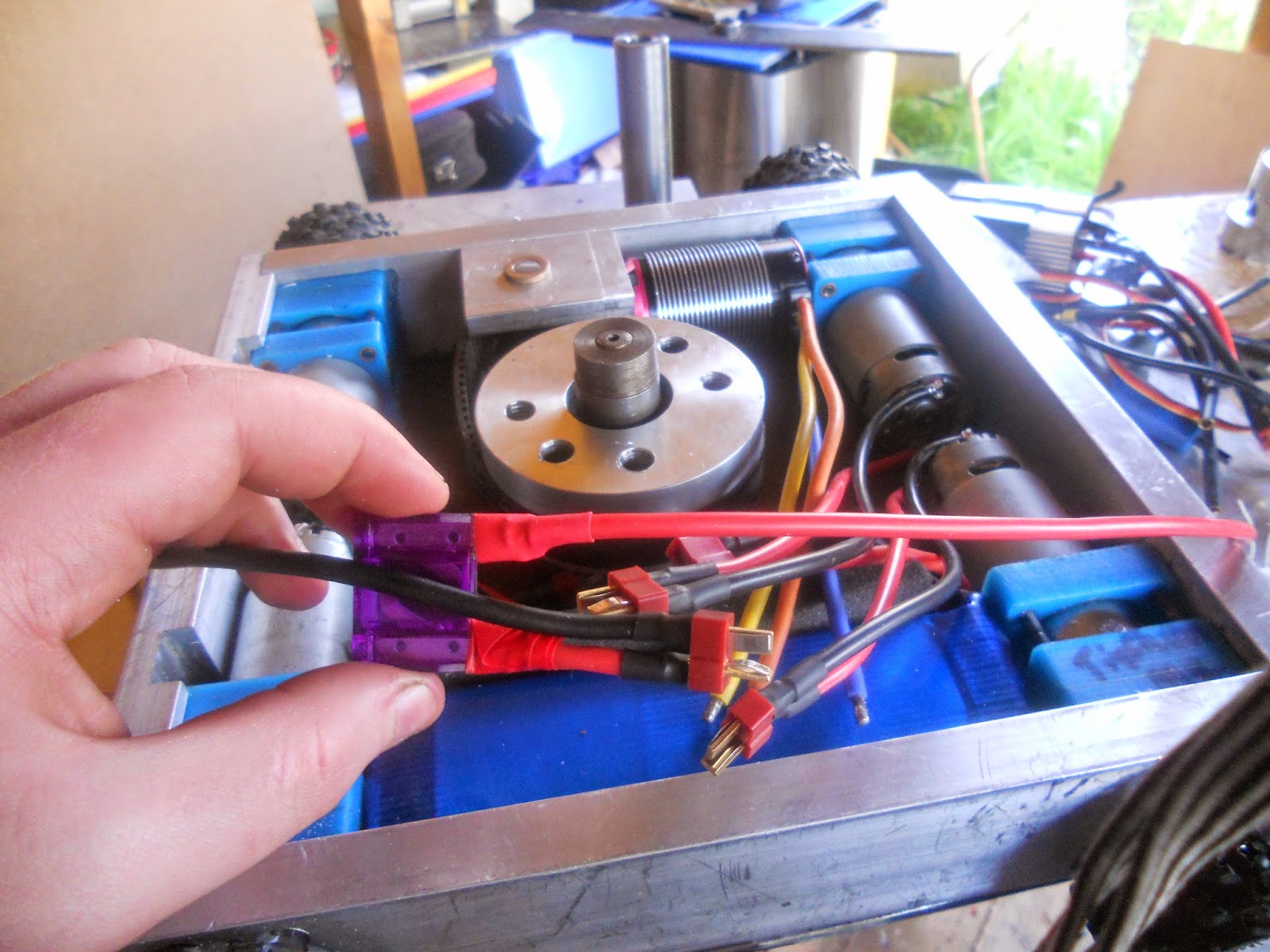 After a while I was off my tits from soldering fumes so I decided to work on the weapon a bit more in an effort to get it spinning. I still had massive doubts as to whether the thing would ever actually  work. 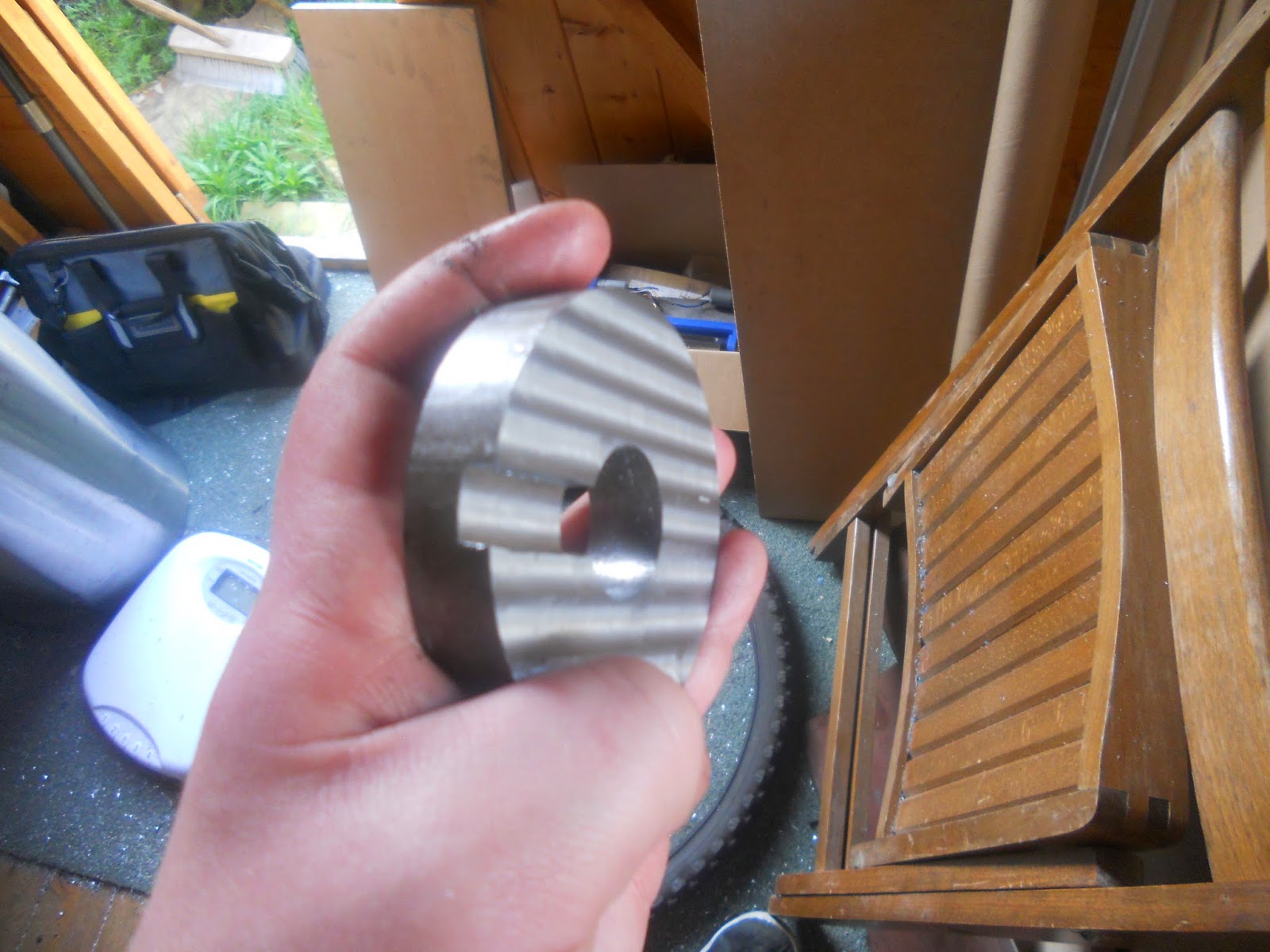 Milled a slot in the steel for the link wires to fit through. Didn't take long although I don't much like working with steel. In the background you can see a bike tire I found on my way home from college and looked useful, I nabbed it. Fortunately I didn't get many more odd looks than normal. 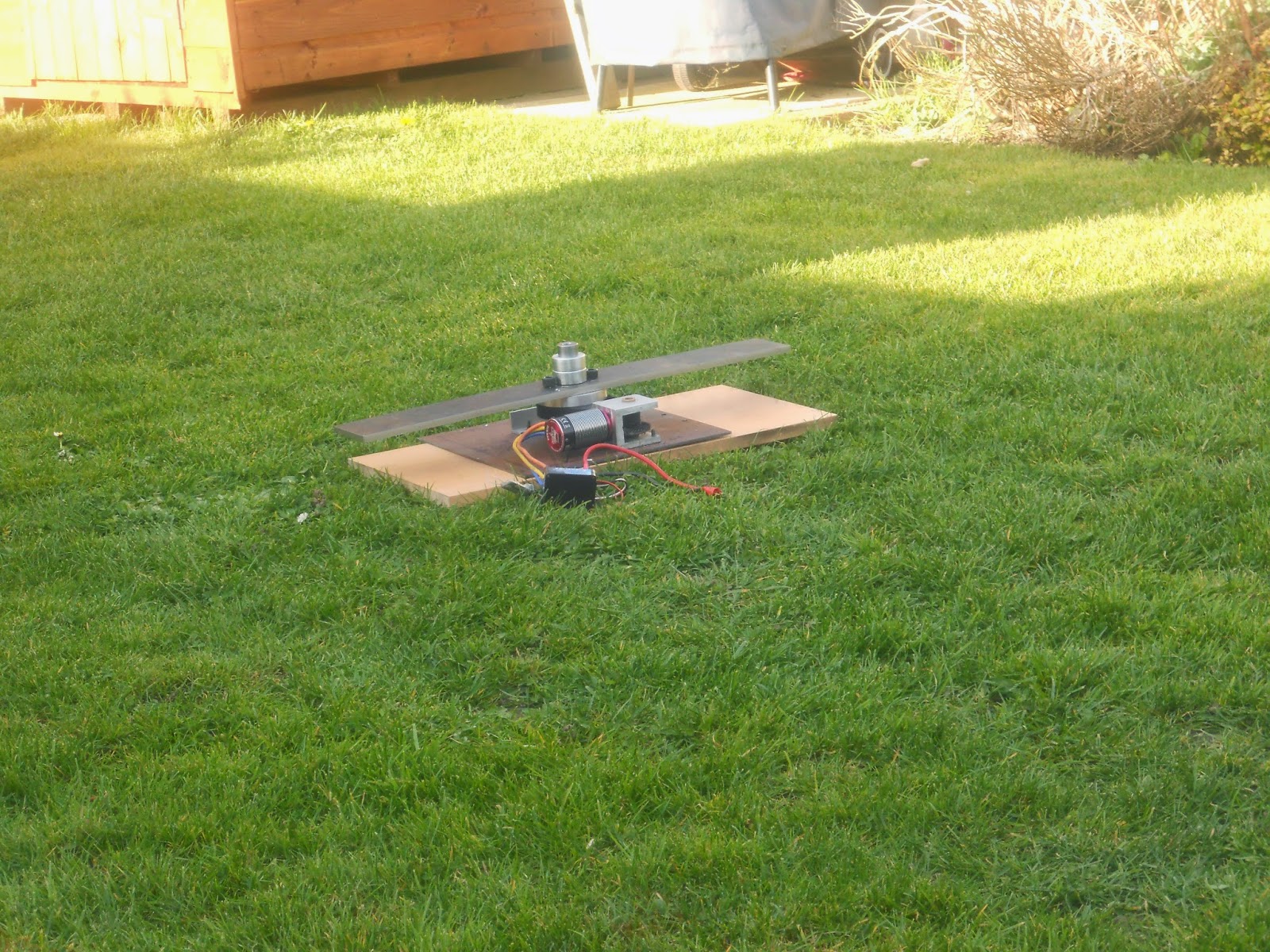 Could it be? A spin test? Yes and yes are the answers to those questions. I got the weapon assembly mounted up on the base and stuck it in the garden. Reason for it not being in the rest of the robot was if it did explode horribly I didn't want all my everything to be damaged.


Only on 3 cell LiPo. Will be running 5 cells in combat. OH MY GOD I'M SO GLAD IT WORKED HOLD ME. ahem. Well yes, I am so, so very pleased and surprised that this worked. Bit unsure how because the weapon is made out of bodge and spit and held together with hopes and prayers. I then  called this a day because I like to end on a high once in a while.

I started the next day of building with a realisation my workspace is totally cluttered. An example below 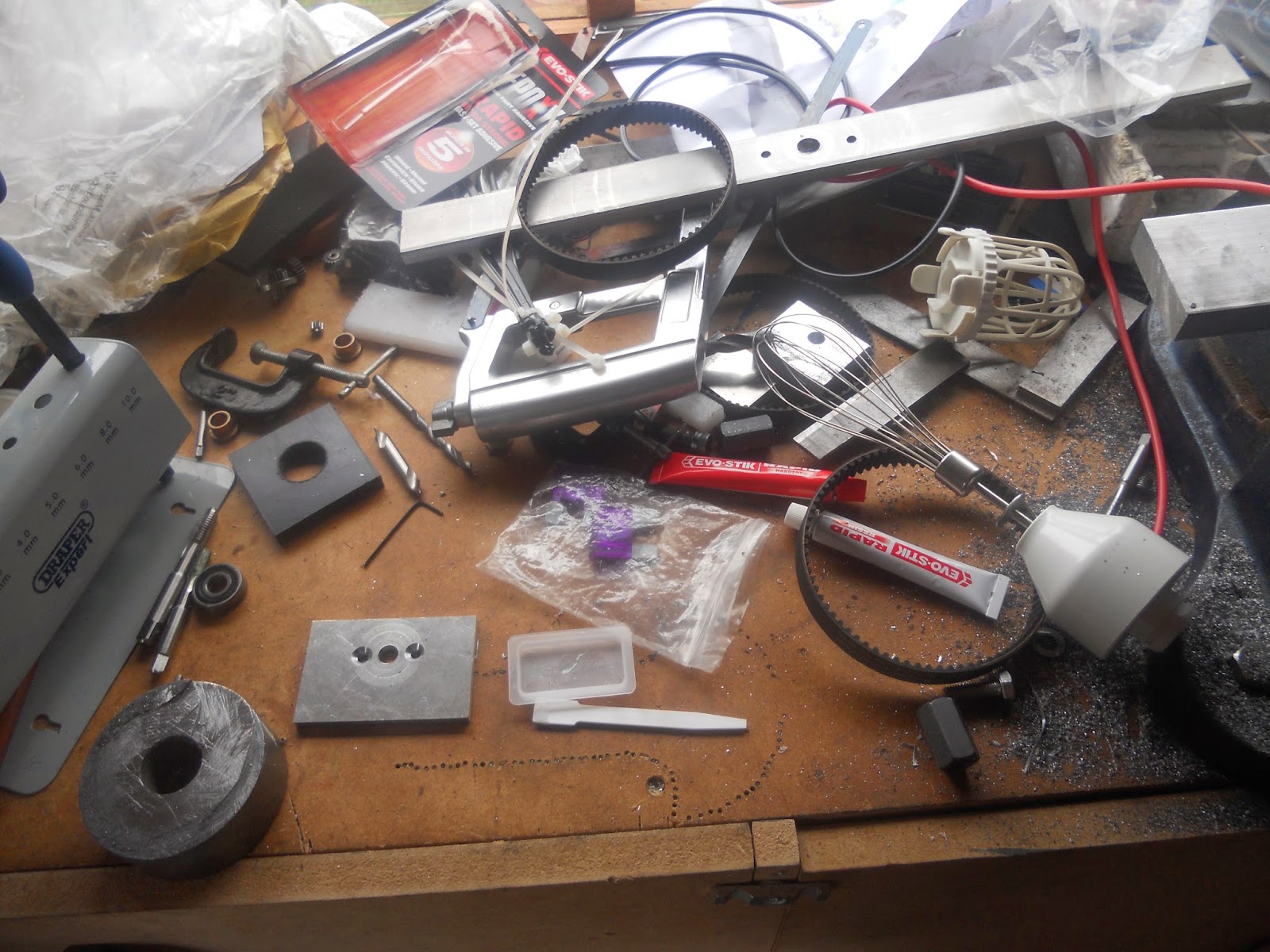 Well my work areas do tend to become a little cluttered. Failed motor mounts, fuses, hacksaws, belts, bearings and.... a whisk? What are this I don't even?

Anyway I stuck on Lamb Of God and set about doing a something. 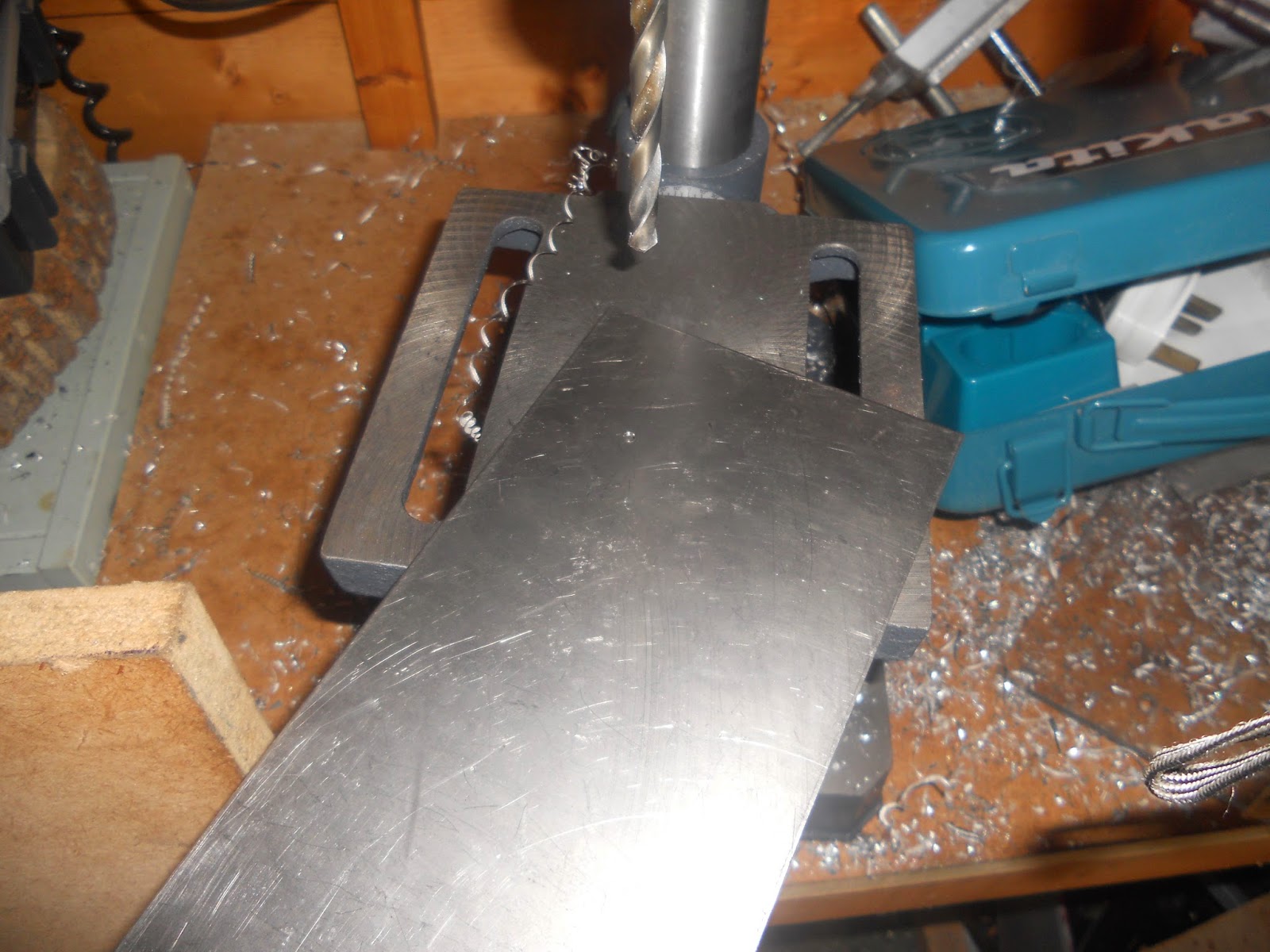 Drilling the titanium for the wedge. Its 2mm thick, so springy instead of being protective armour. 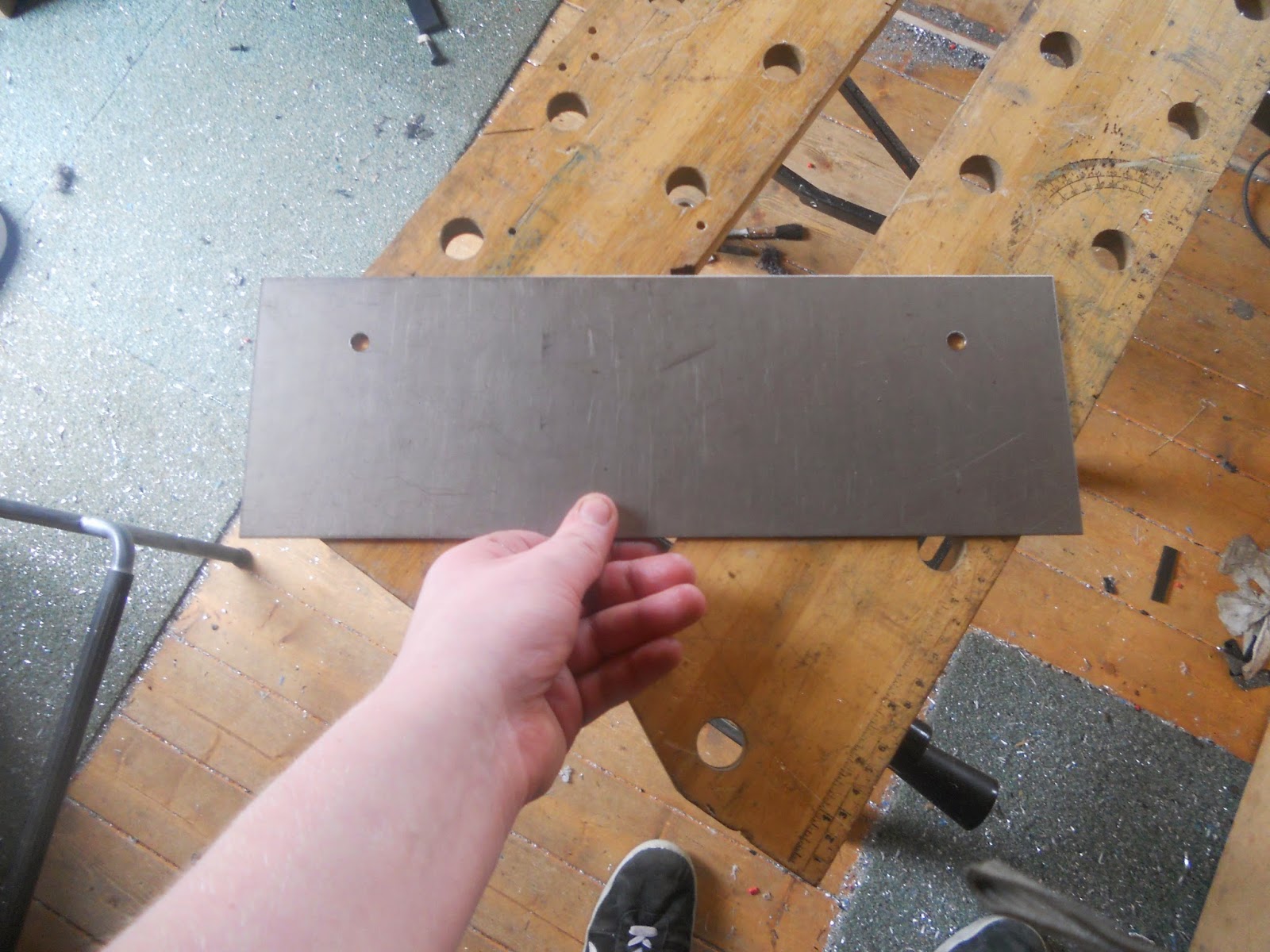 Regular HSS punches through it like it was nothing. You do need a fair amount of pressure though. I don't do holes in one go so much. I work up to it. here these holes are at about 8mm or so. I stepped them up to 12mm and then briefly countersunk them, again with an HSS bit. 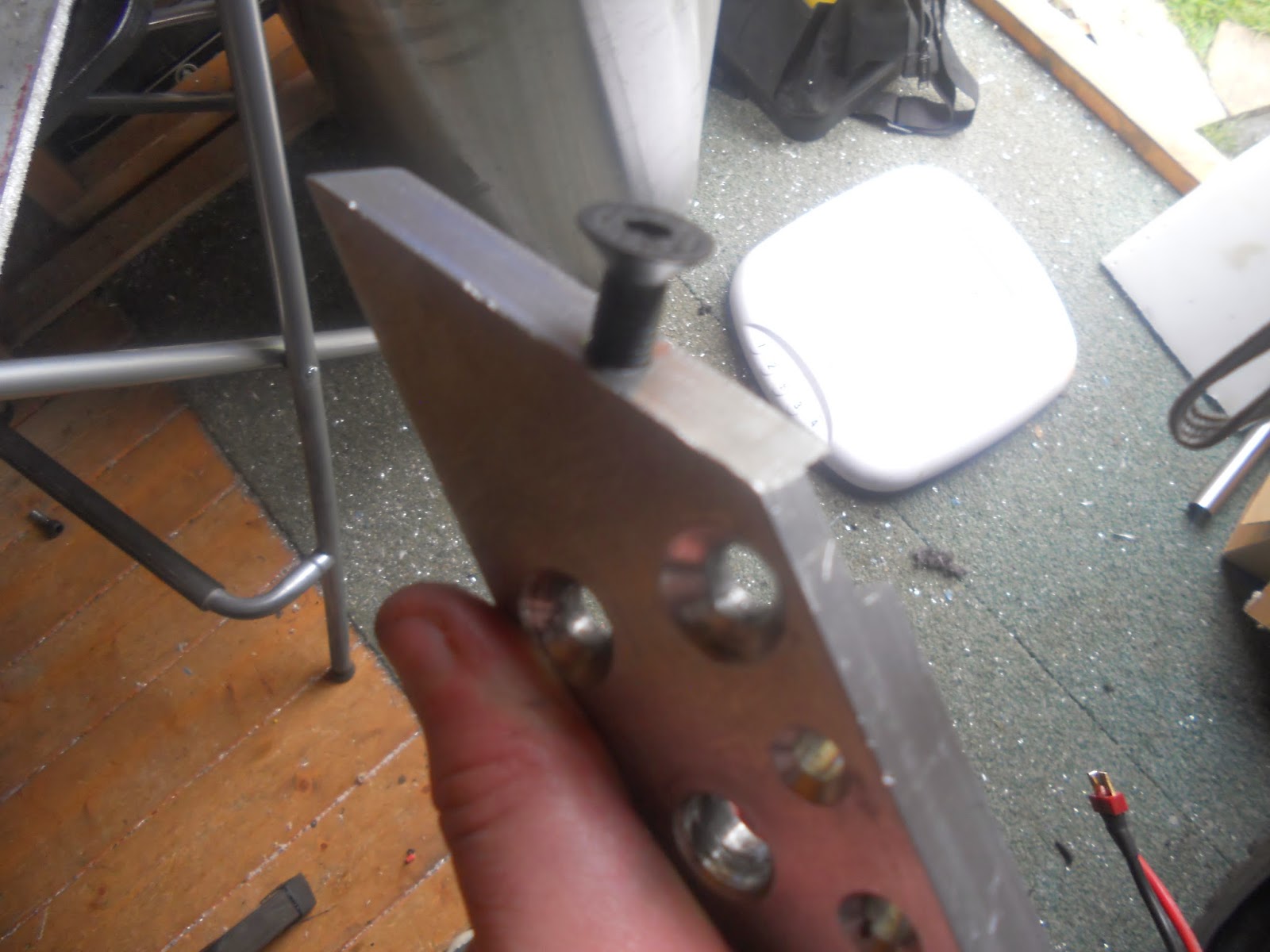 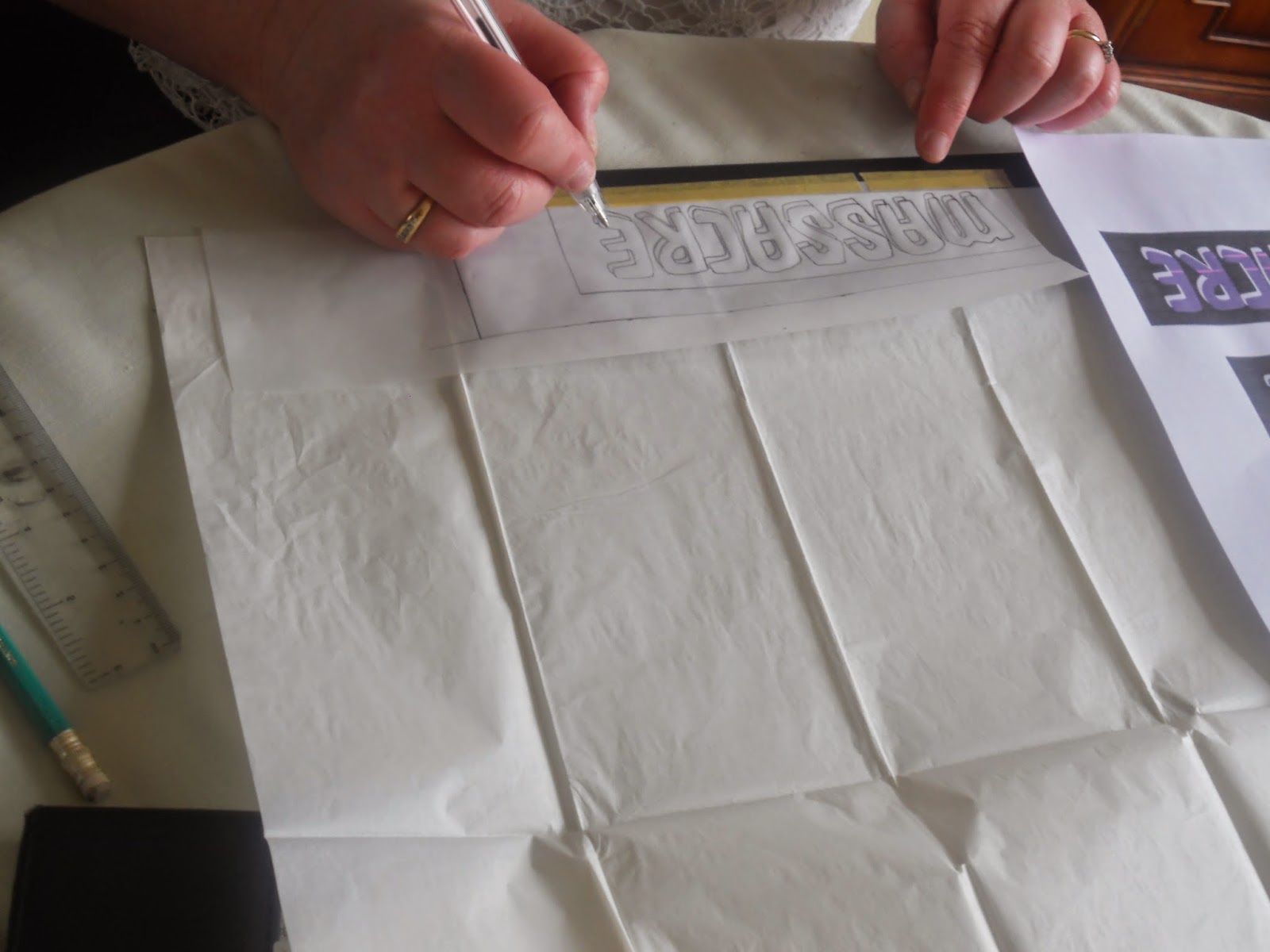 Also, names/logo things! Here you see my mother, Liz doing something with the paint screenshot I threw at her with a vague direction as to colour. If she had a website I would link it here. But she doesn't. So I won't. 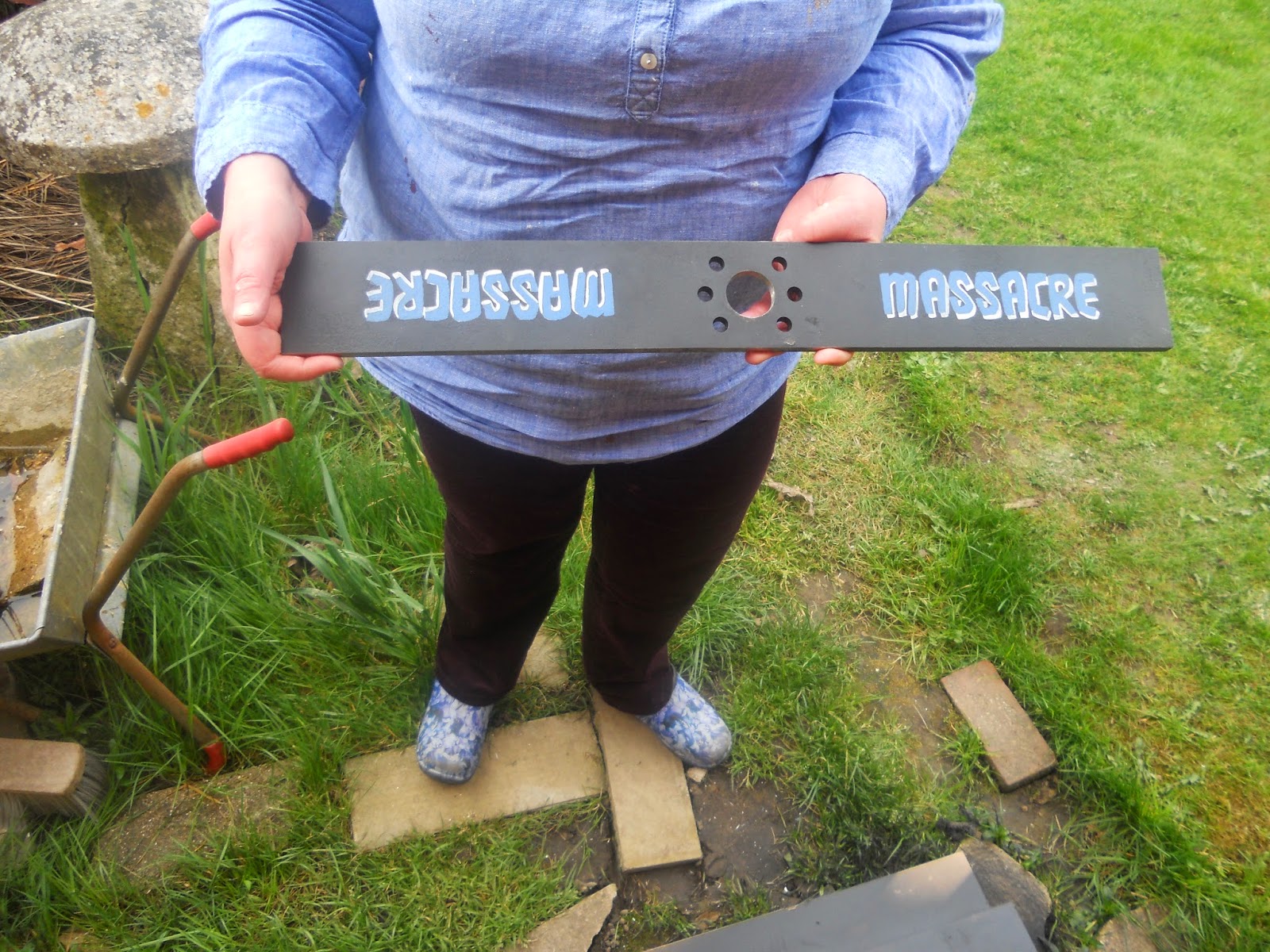 Sweet! At least I think it's looking pretty good. Now all I have to do is get her to do the spare..... 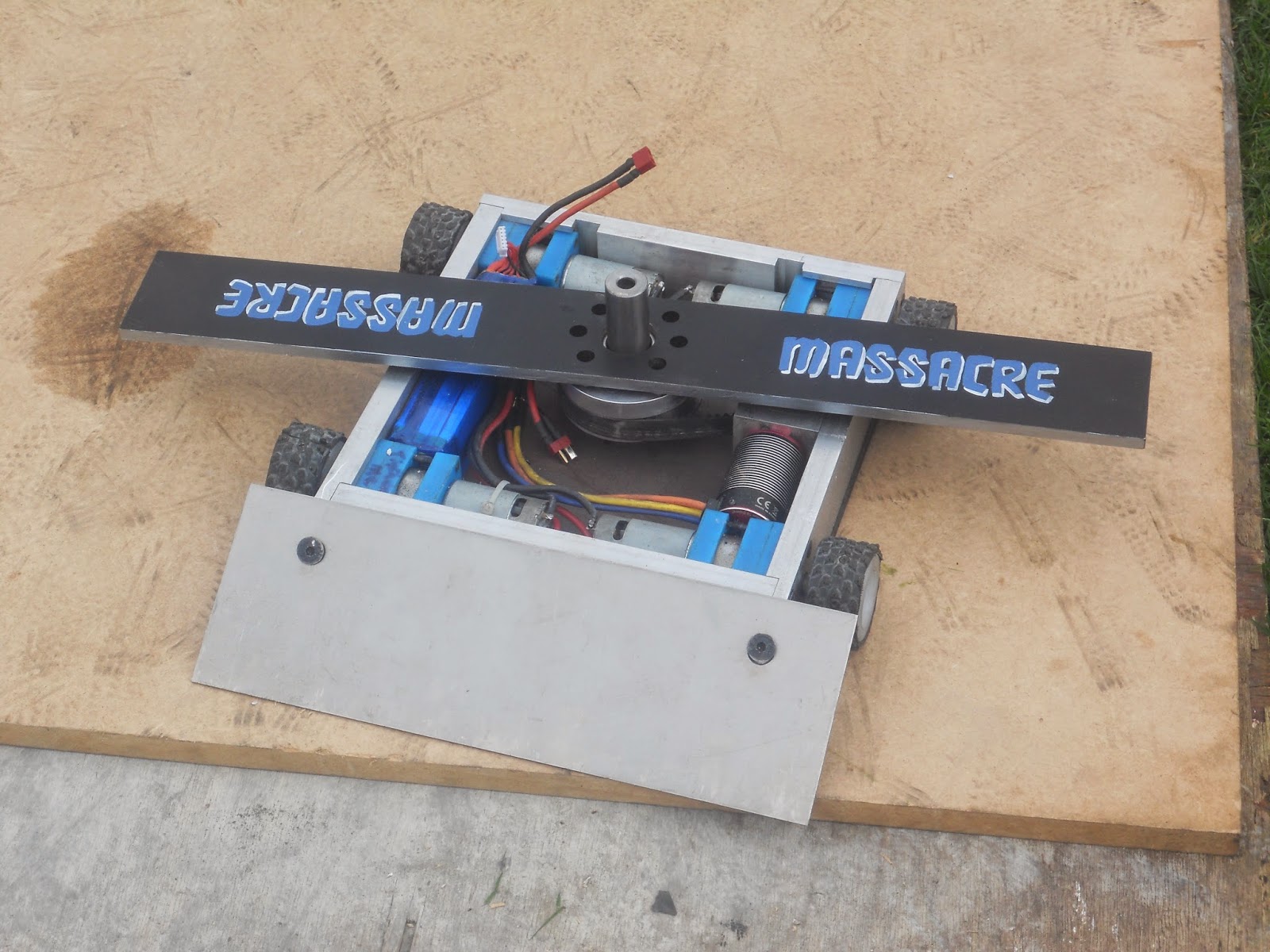 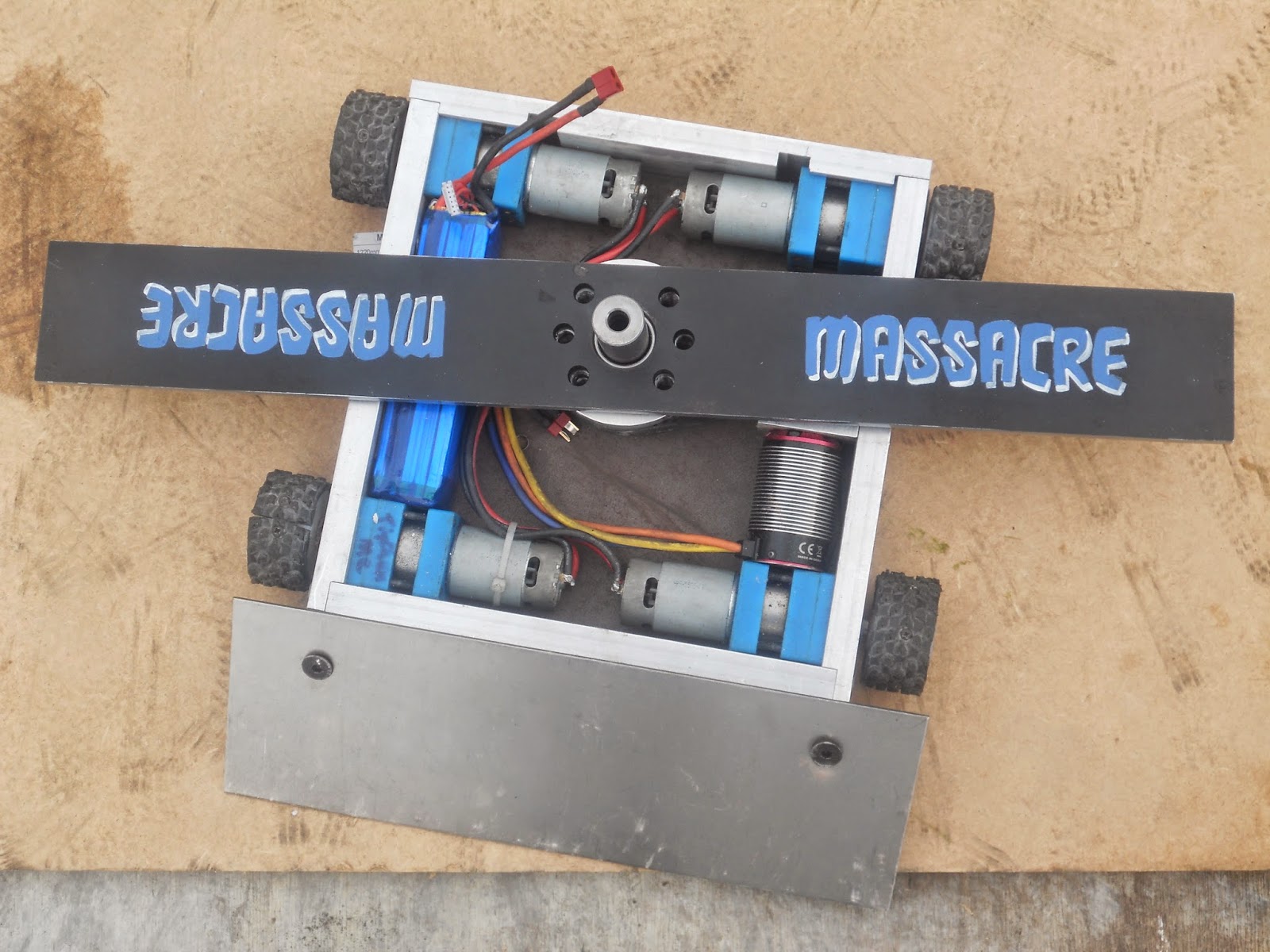 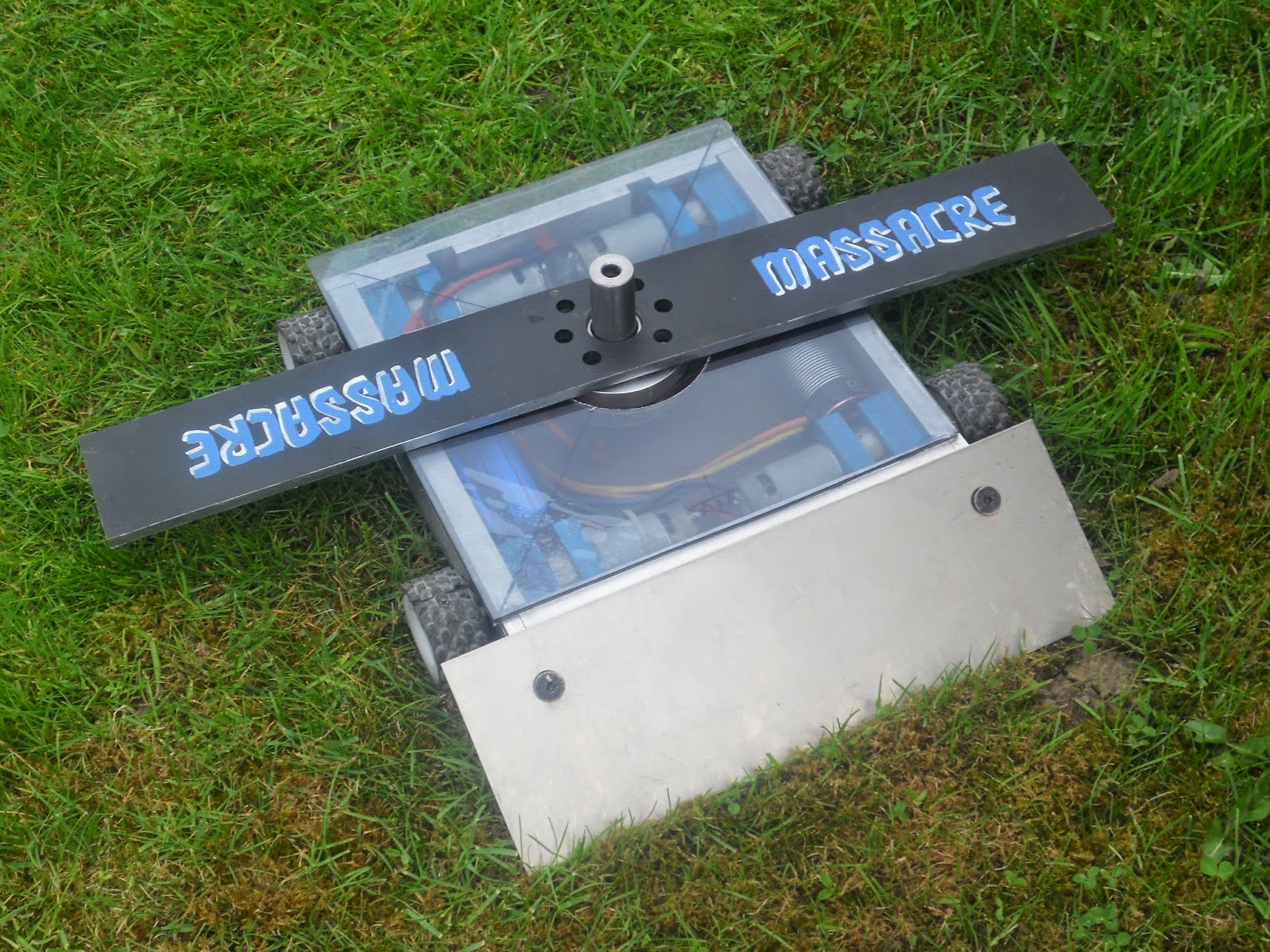 Quite a lot of Pretend-O-Botting going on there, but it's not as bad if its close to being a proper robot right? Right?

I then made up a spacer to raise the bar height a couple of millimetres so as to have a more sensible clearance for the wheels/top panel. It's still low enough to get a good hit on a 75mm wheel though so don't worry. 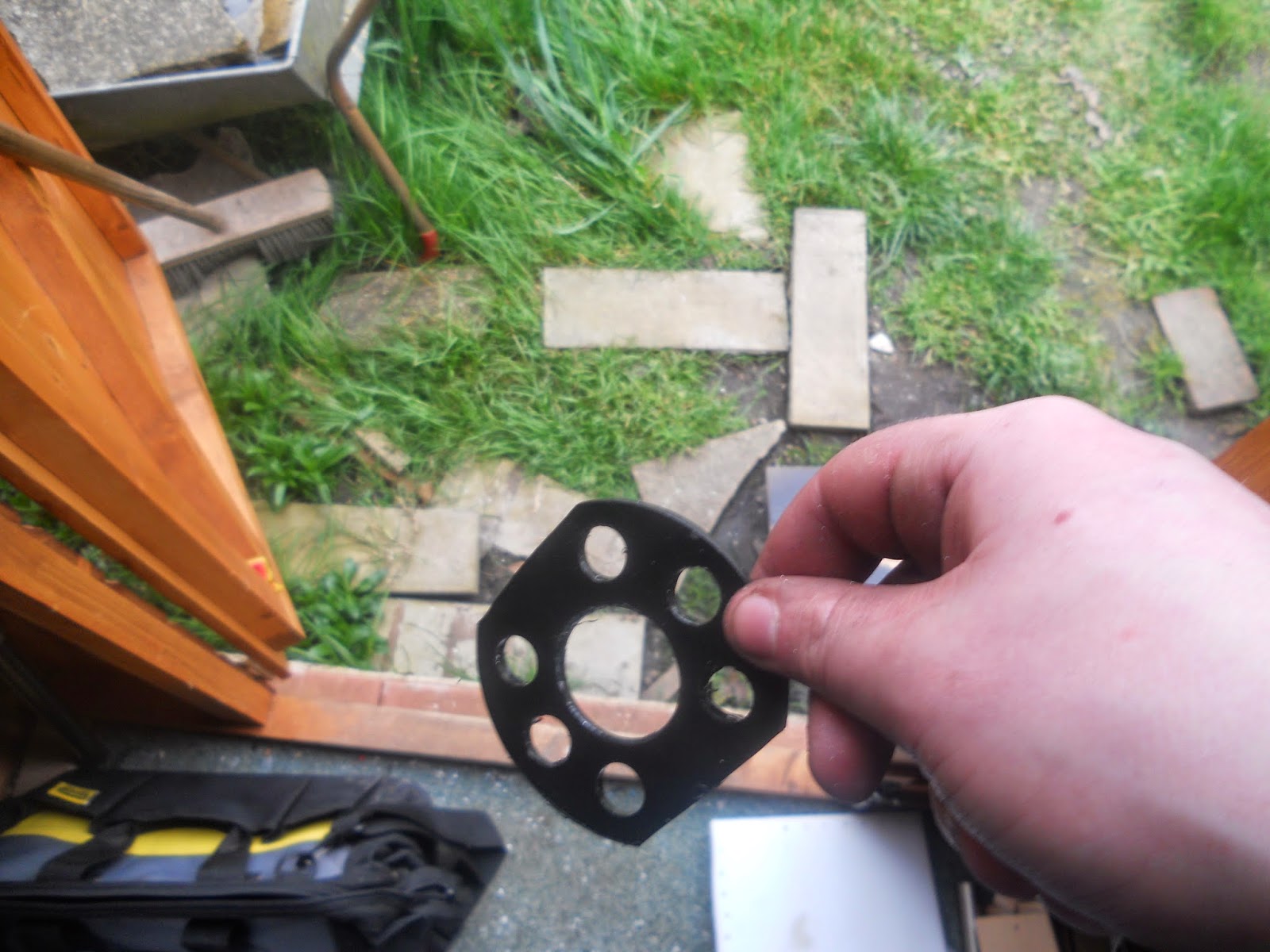 Then it was time for some testing with the frame/wedge present. Heart was in my mouth (still on 3 cells but I think powering a massive motor drawing a large current was taking its toll on the small discharge pack) 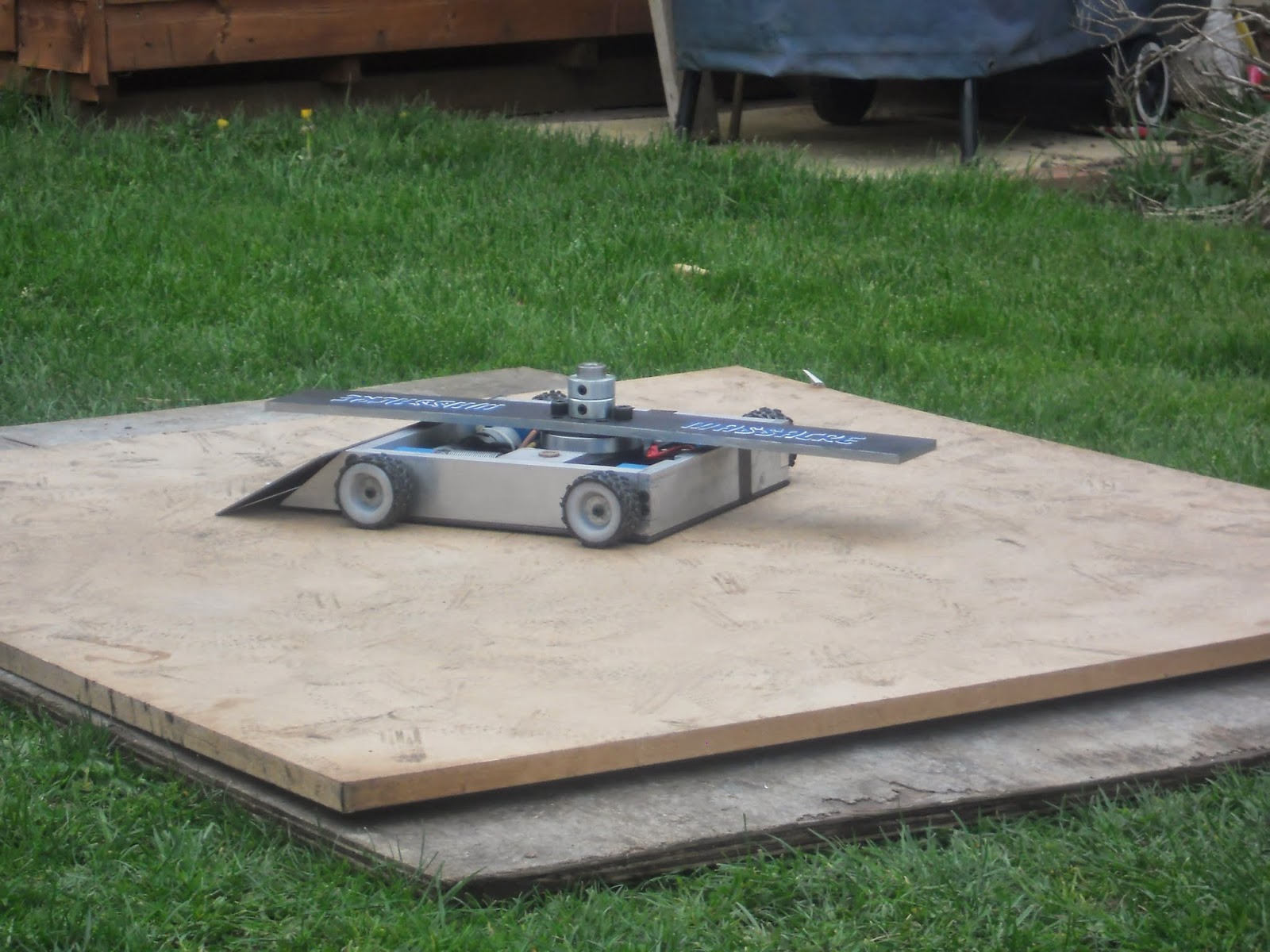 Noise is coming from an unlubed gearbox. I should probably sort that before I spin it up on 5 cell. 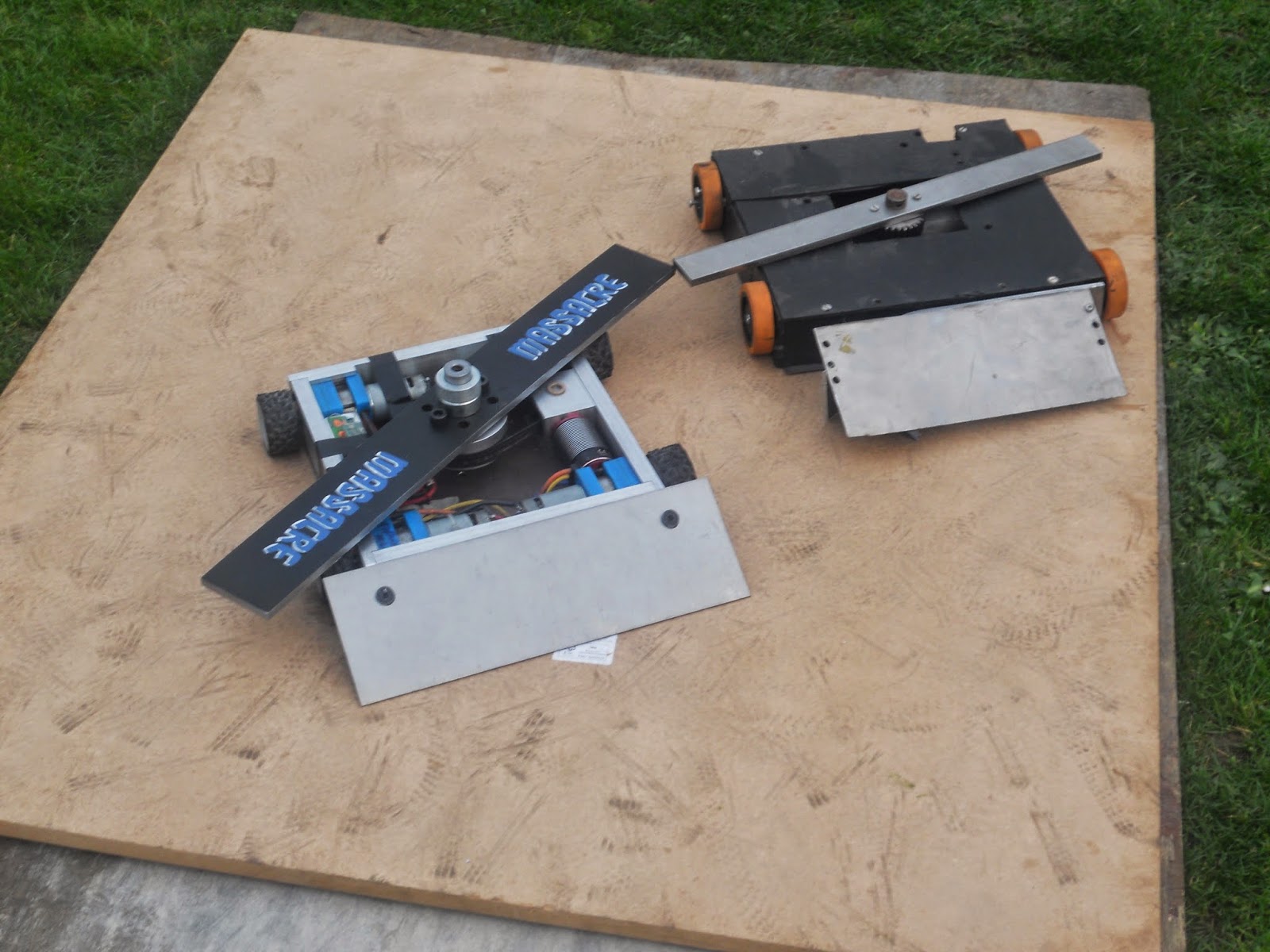 Finally we have this, which is a comparison between last year's robot and this years. I would like to think that I have come a fair way since the HDPE bumble-box. Will defiantly do a Pre-Champs post. Possibly one update before that as I still have a few odd jobs left to do. A giant clusterfuck champs event report thing may  or may not happen, I don't know. I'll be heading up Wednesday with my good friend Ellis and his father. His robot is way posher than mine and is looking to do very well. Its our first year of more legit machined robots so I hope we don't get too fucked up by the veterans. His robot "Pingo" or "Tango" or something like that can be found here and can be summed up with this video.