The title makes it sound like stuff happened. It didn't. I started a few odds and sods and documenting them helps me to get my thoughts in order.

I'll start off with a continuation of raptorweight (6kg) thoughts. Going abroad for a comp isn't going to happen super soon because money and inclination are both in short supply. I threw some ideas around, coming up with two stupid vertical spinners which were rather beyond budget at present moment. I then dropped this to a silly fast wedge. Tentatively diving into custom gearing to give me 20mph. 5/8" 6082 aluminium frame and a 4mm mild steel wedge which I designed to be watercut, scored and bent to shape then a weld run inside the bent to strengthen it. This would be cheap, as I would only have to splash out on one part, the watercutting hence why it was a fancy method instead of just buying plate and hacking it up.

This idea died a death when I bought a 6mm wall aluminium tube. Drum spinner tiem. 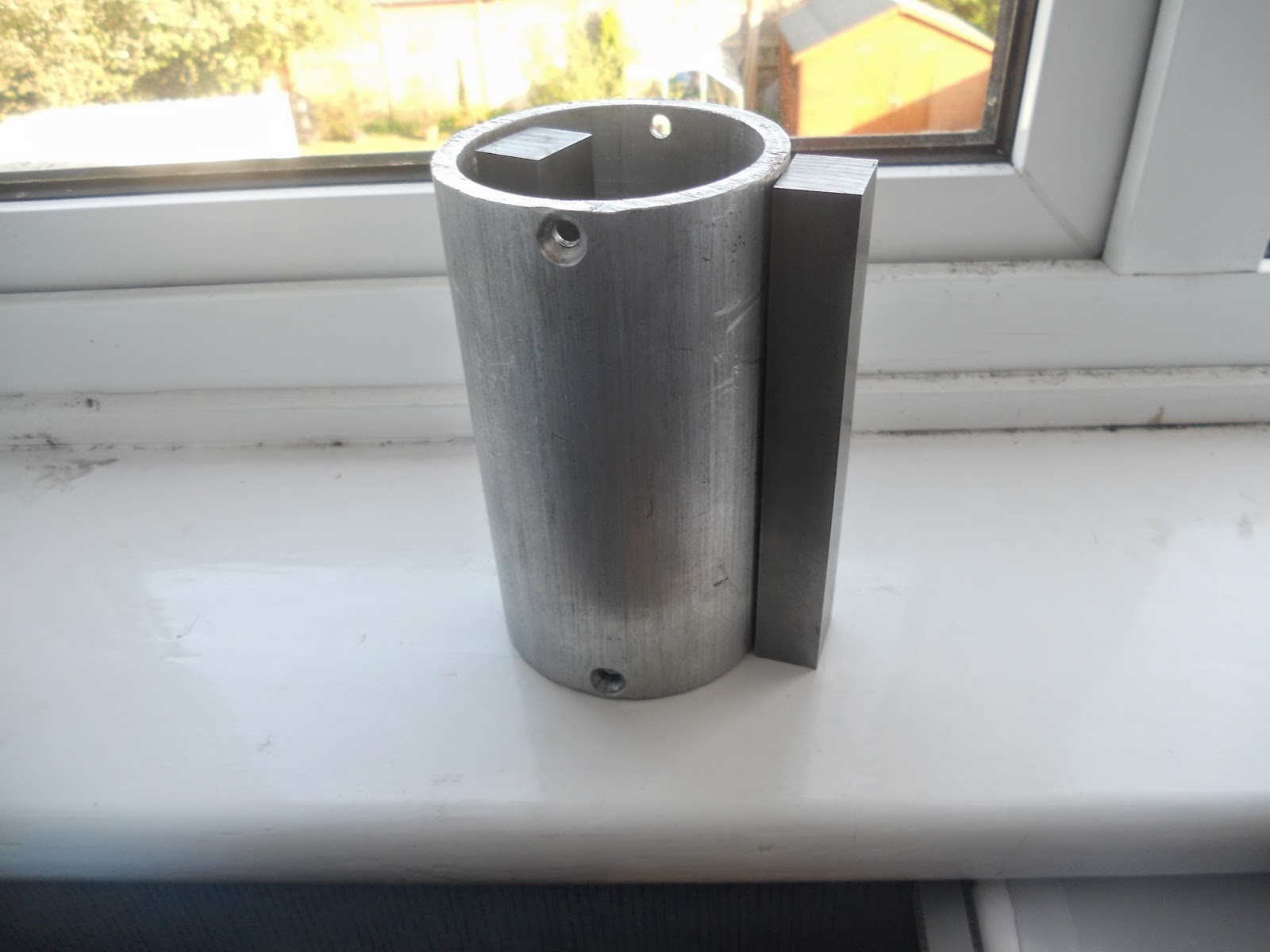 Dicking around in CAD allowed me to stick a counterweight inside the drum and get it balanced. Shot to sorta kinda show what I mean with some rectangular steel stock. Neither machined to their sizes yet. 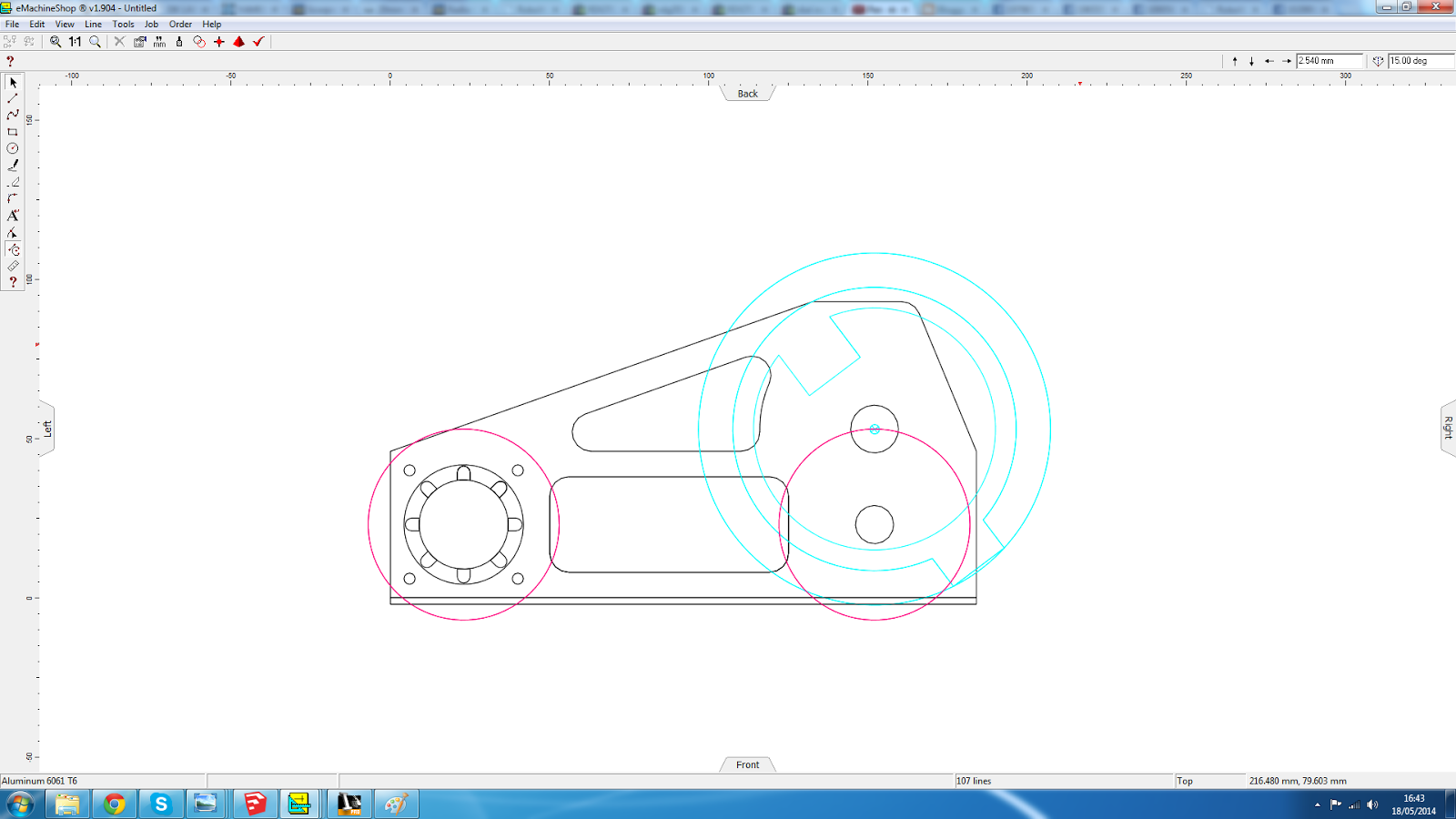 This is the kinda shape I was after. The slanted back gives me a nice airgap to protect all the gubbins with. I wouldn't be able to have that with just a flat Dominant Mode shape. I'm not skilful enough to survive with my haphazard internal space management and a design like that. Robot is kinda tiny, more so when you realise that the wheels are 60mm.

4wd is fun, but 4 motors is hassle and too much weight. To solve this I had to figure out a good way to link the front and back wheels together. Space was a premium as always. Thin HTD timing belts will do. I wanted a dead shaft for the un-driven wheel for strength and also because I can't do bearing pockets due to chronic lack of a  boring head.

Now instead of just sticking a 3/8" UNF tap into some hubs most UK people seem to prefer getting some nuts and just using those pressed into wheels. I am no exception, I used insert nuts for Massacre. I got a pack of like 10 or 12 for chicken feed and I might as well keep using them. I began experimenting.

First, using an incredible display of ghetto engineering I threaded the brass nut onto a cut off drill shaft (blackened because I'd been using it to heat-press the  inserts back on Massacre with a large blowtorch) and stuck that drill shaft into the chuck. I mounted and squared up my workhorse vice in the mill and ran the nut/shaft assembly back until it touched the far jaw of the vice. Tightened it up, locked the table down and took the shaft out of the chuck and put it to one side. 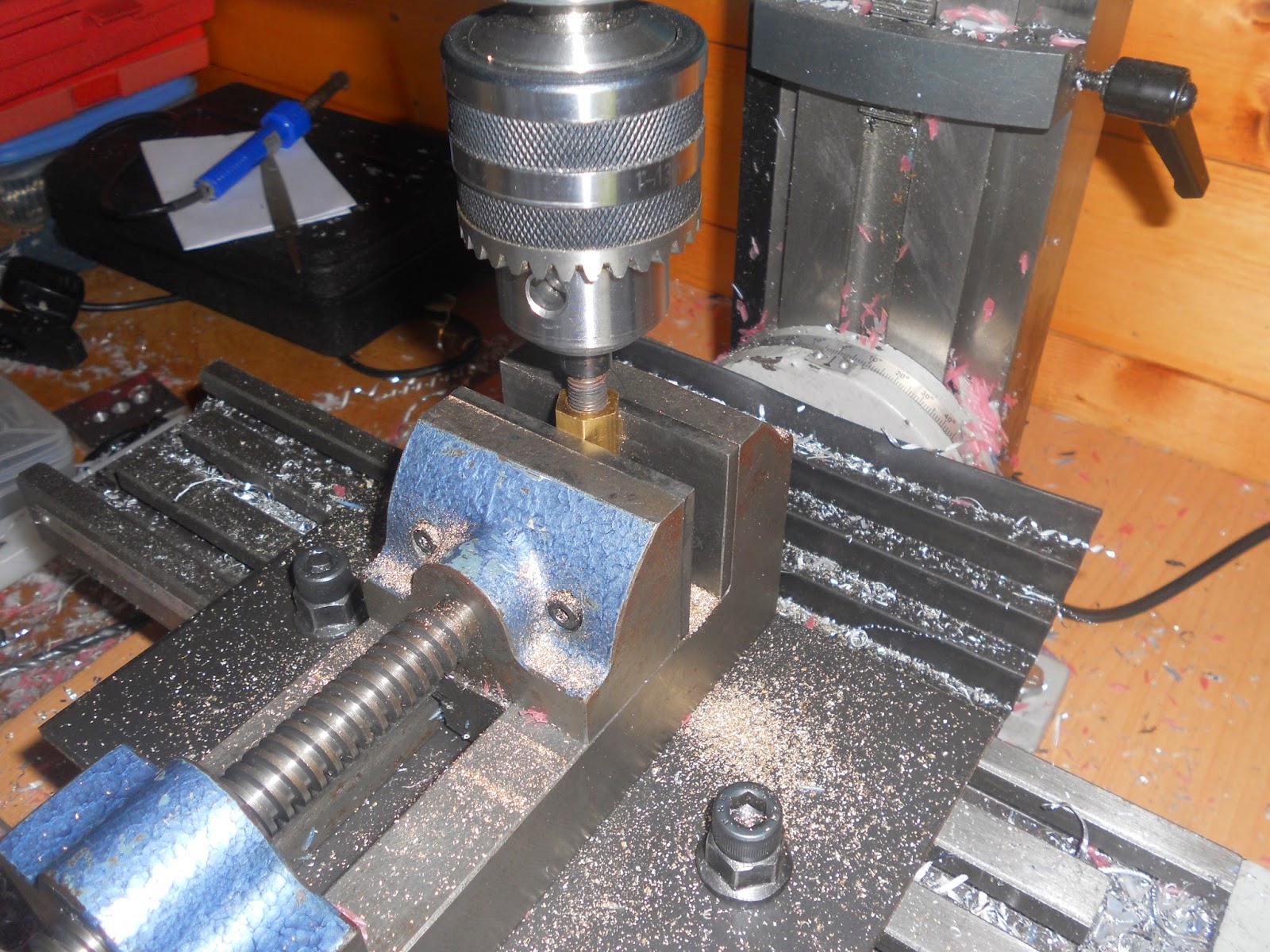 Then I hogged out most of the meat and the threads with a 9.7mm drill. 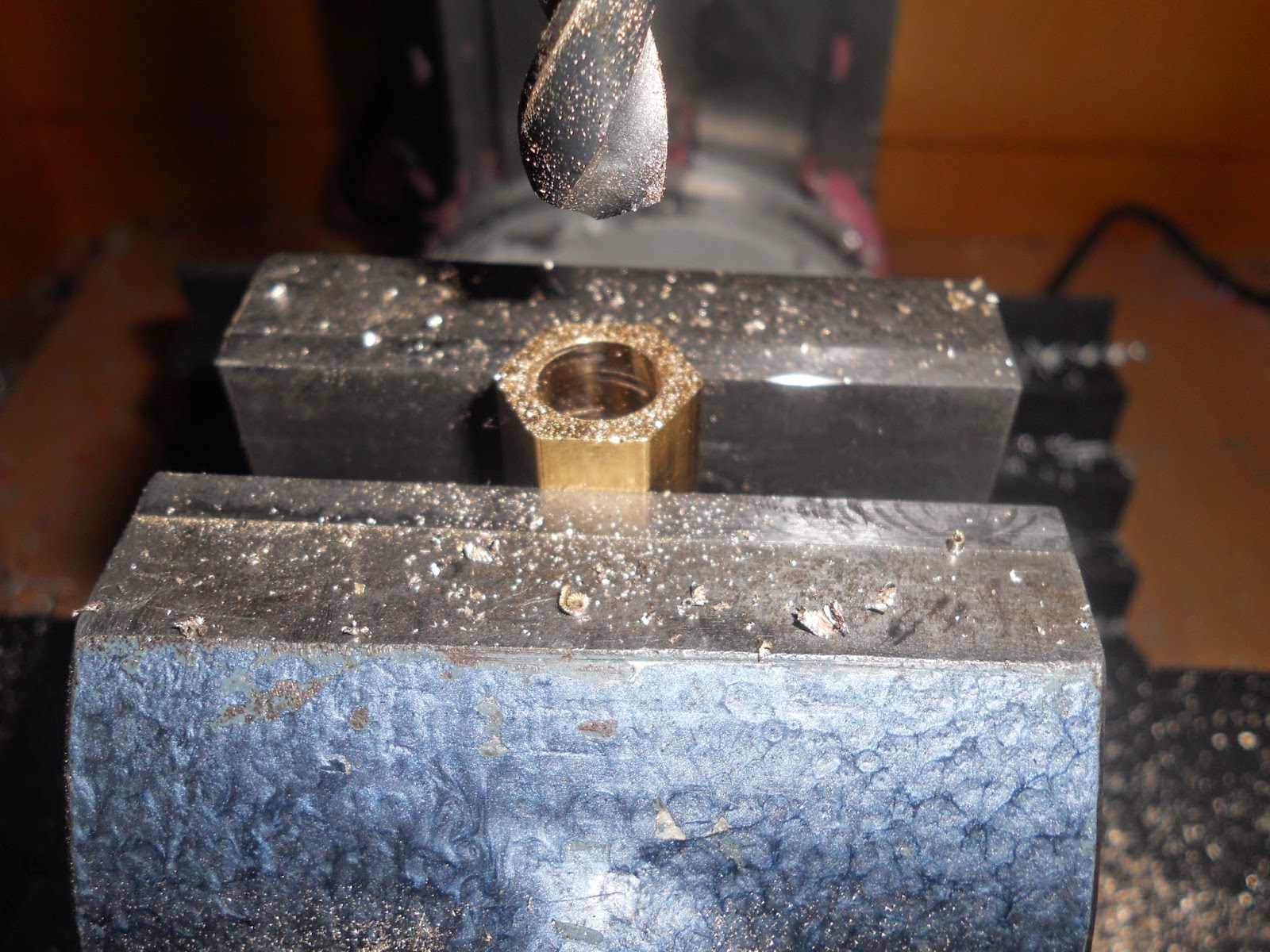 Then with pure unfiltered bodge I ran a 10mm endmill (that's right, endmill) through the bore to get a legit 10mm bore. It ended up being about 10.08 which is pretty perfect. Considering the questionable techniques and my traditional wanton regard for tolerance it's great! 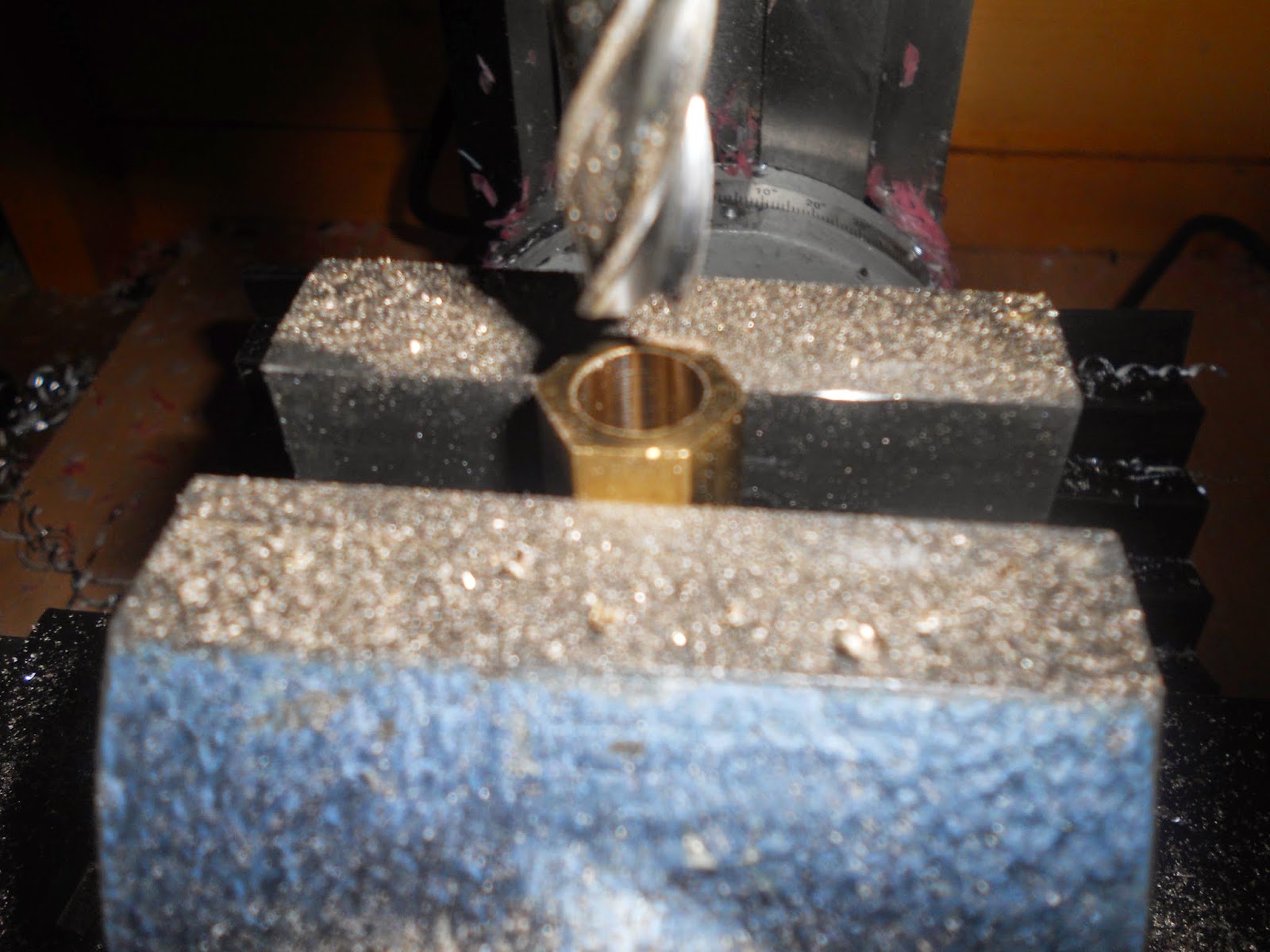 I forgot how to camera so it's slightly more blurry than a bigfoot photo. Sorry. 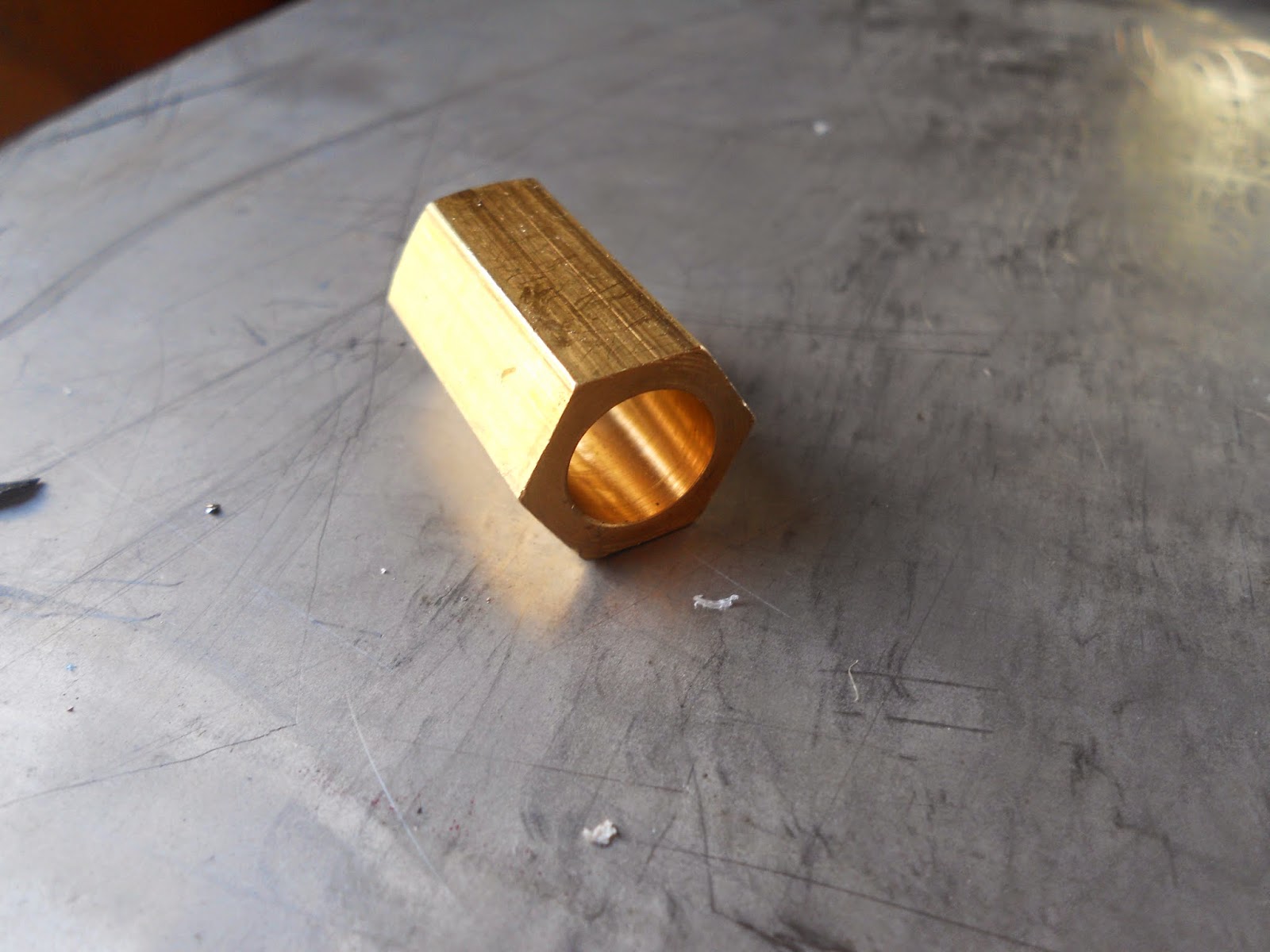 Brass nut made into a Pretend-O-Bushing. Not as good as a sintered steel or bronze bushing but cheap quick easy and with the life and abuse of robot combat I doubt it will have that much effect. I'll keep it lubed and if there is a problem later down the line I'll fix it then.

Then I decided to get the nut mounted into the hubs. Heat pressing is so last month. I thought I'd see if I could use my manly brute force and clout to get them in.

The bore is 14mm and the insert is 16.5mm-ish point to point. should make for a strong connection. 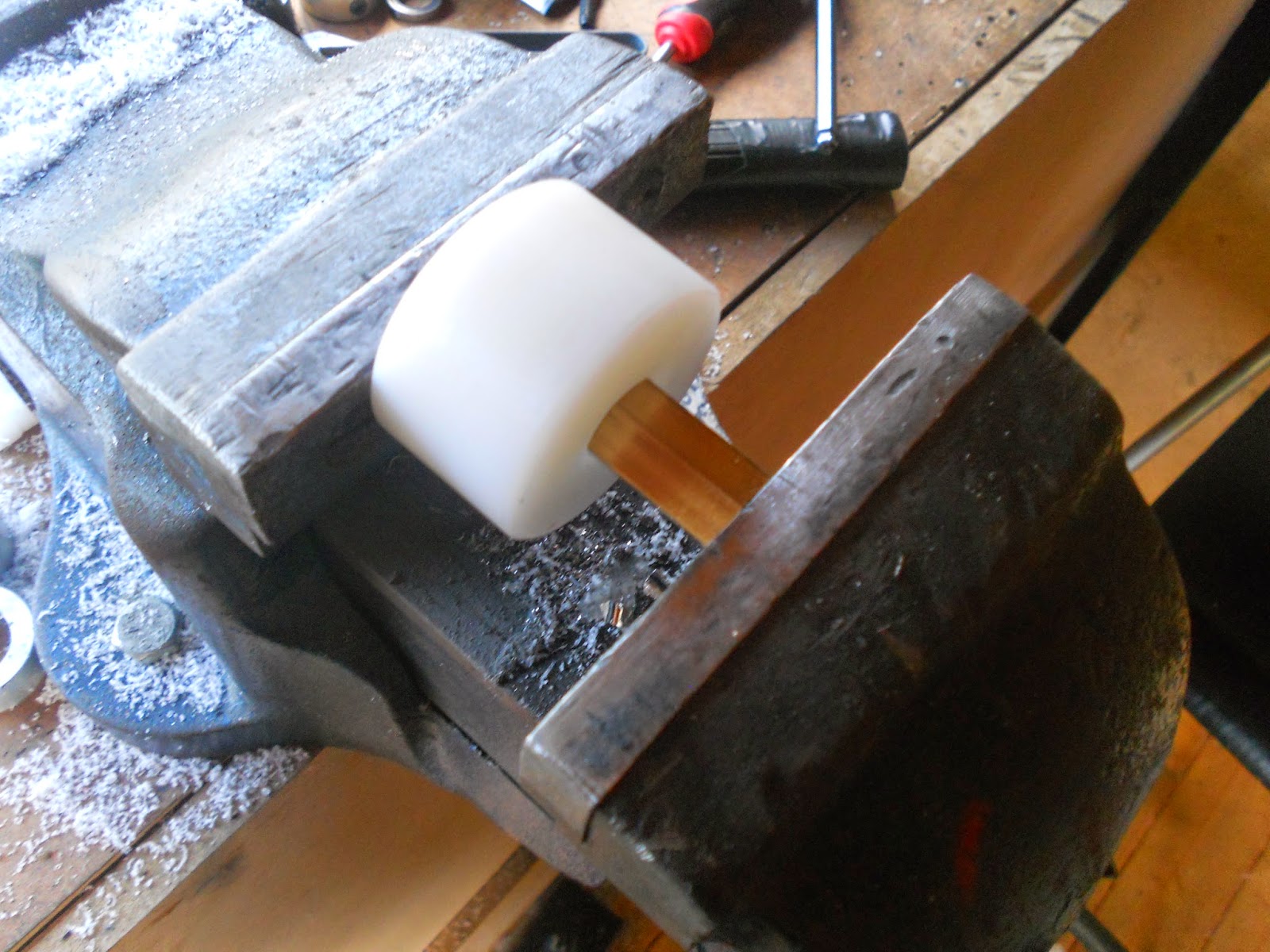 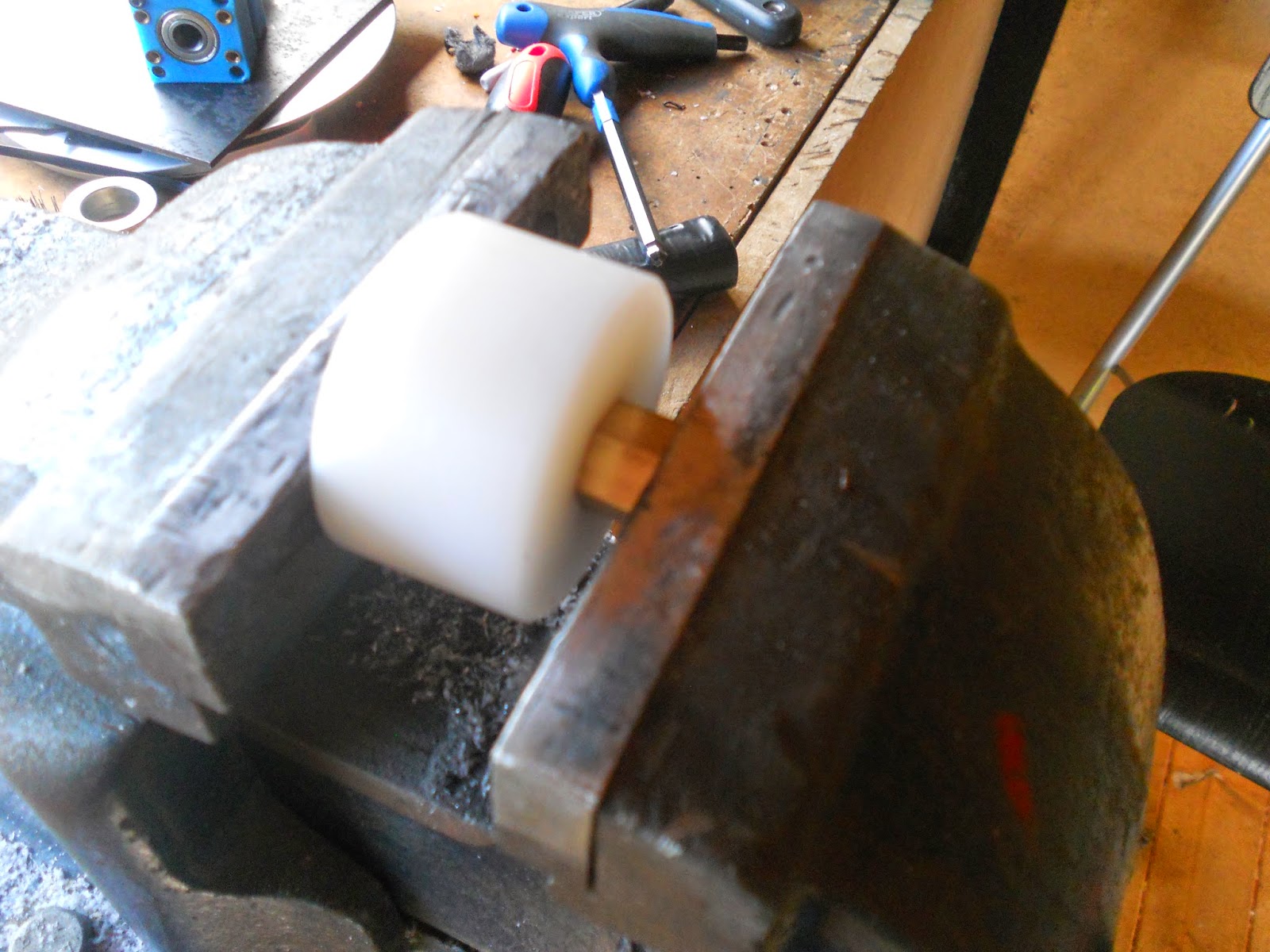 Man I love my press vice. 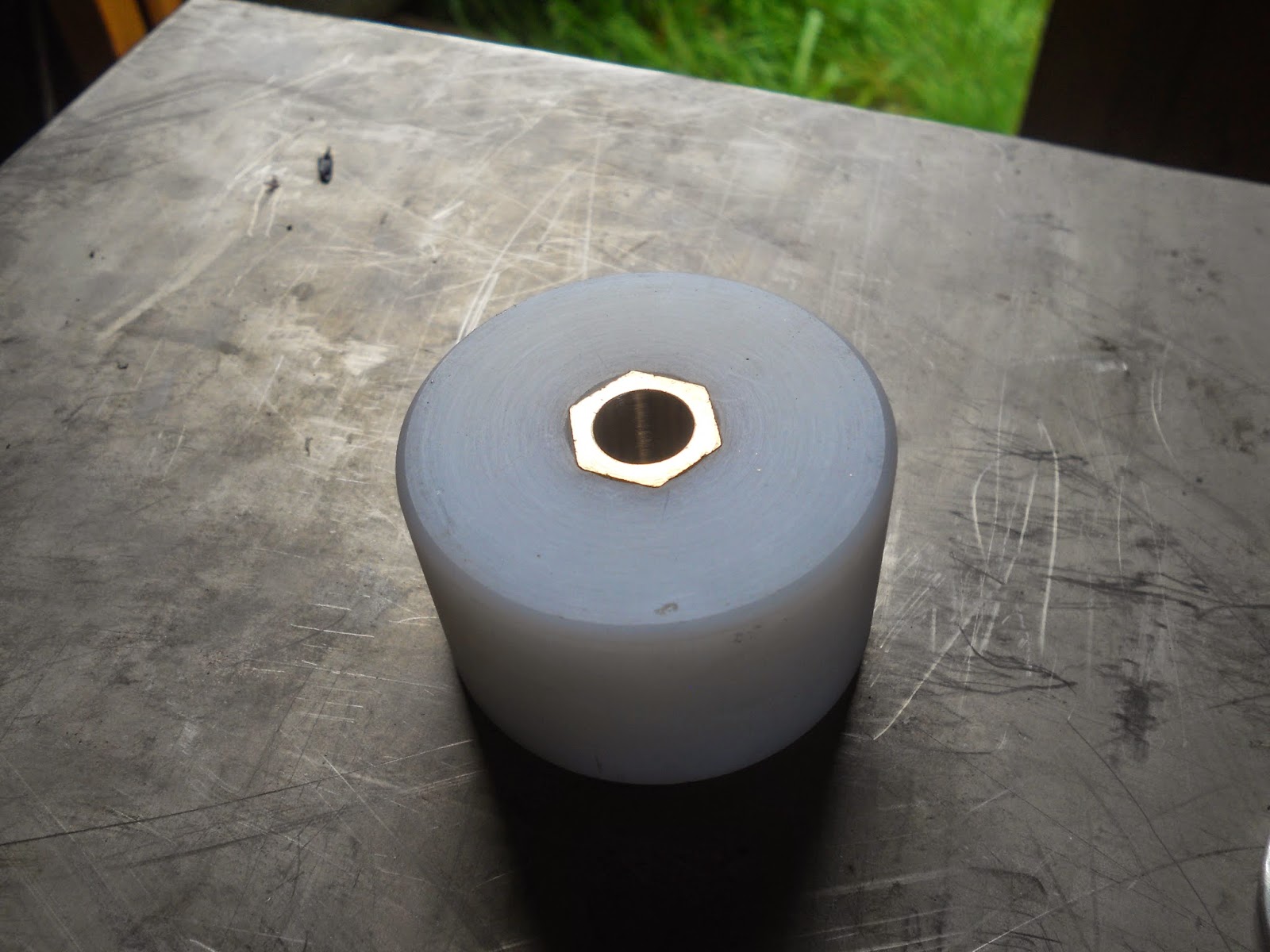 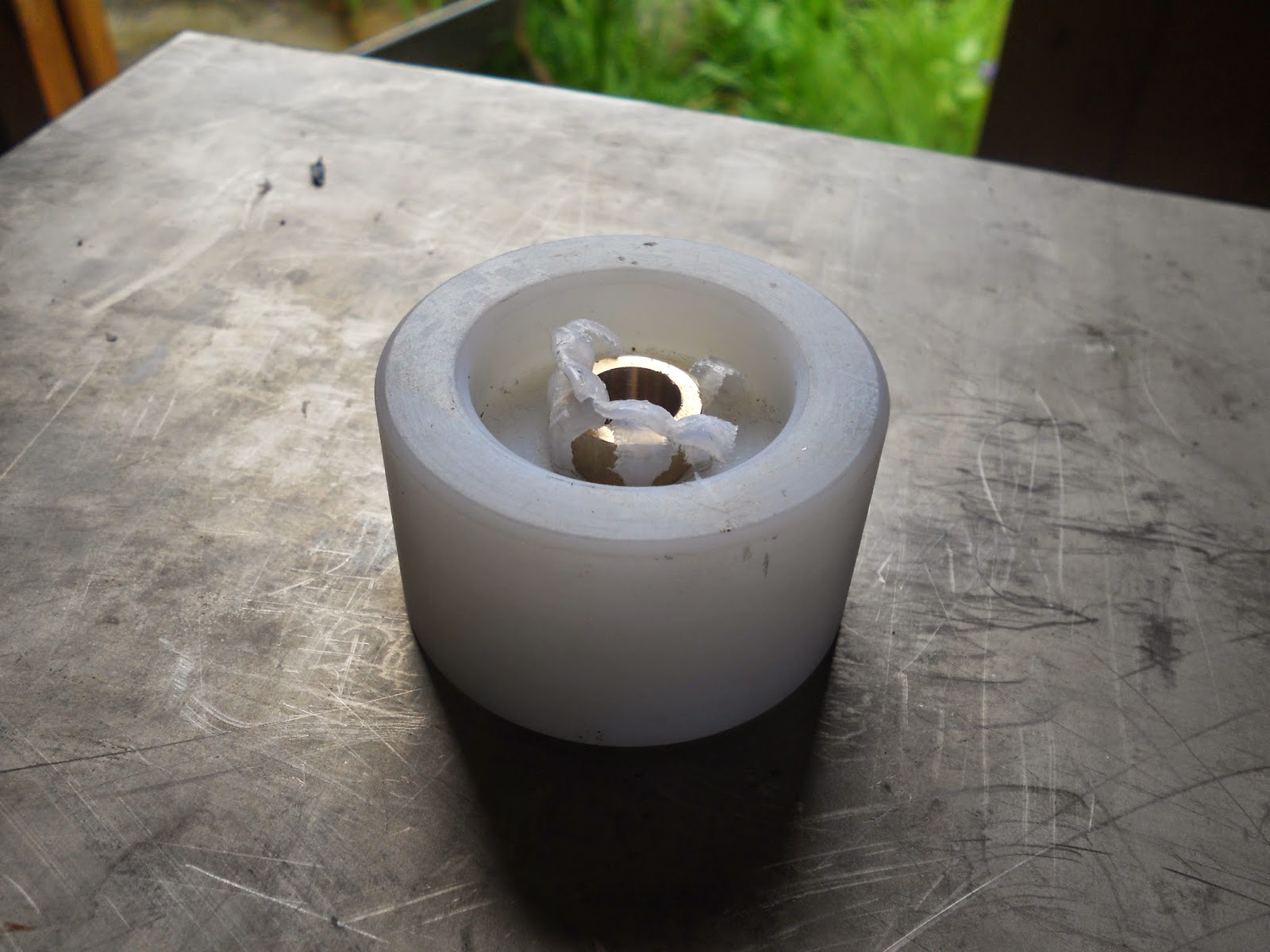 As you can see it was a pretty perfect fit. Straighter than all my heat pressed wheel. Fair amount of crap got pushed out with it. clipped it off and it was ready to roll. Tried it out on a bit of precision ground steel (countersink shank) and it span nicely. 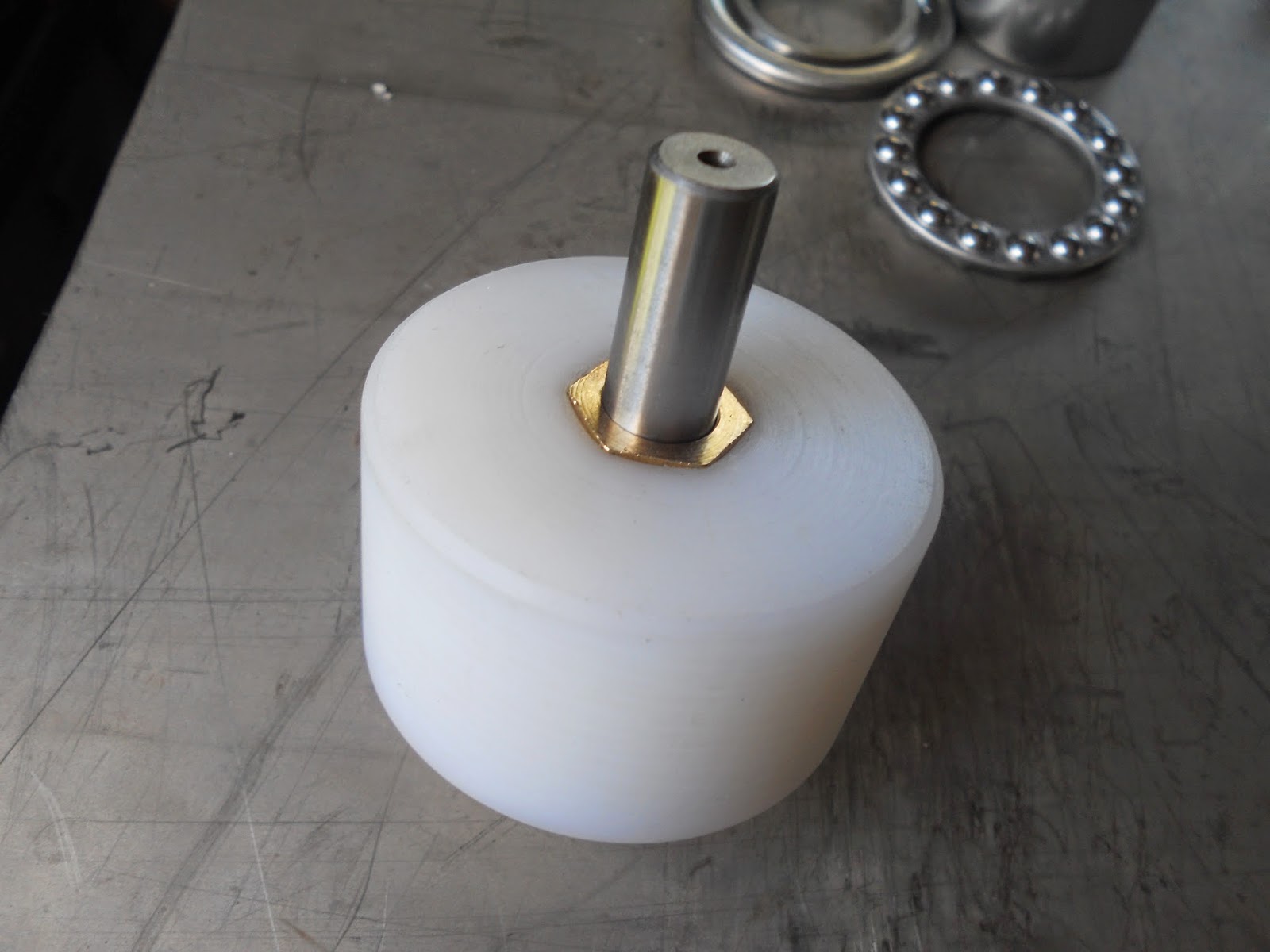 Next we have a look at slight upgrade/improvement on the mill. As you've no doubt seen in some photos I tend to work in chaos a little bit. This isn't the best when I'm working with more legit tools such as the mill. I hate having all the swarf and chips everywhere and without a propper T slot cleaner its a pain in the arse to get it nicely clean. I set out to solve this by making more of a mess making some bed guards. 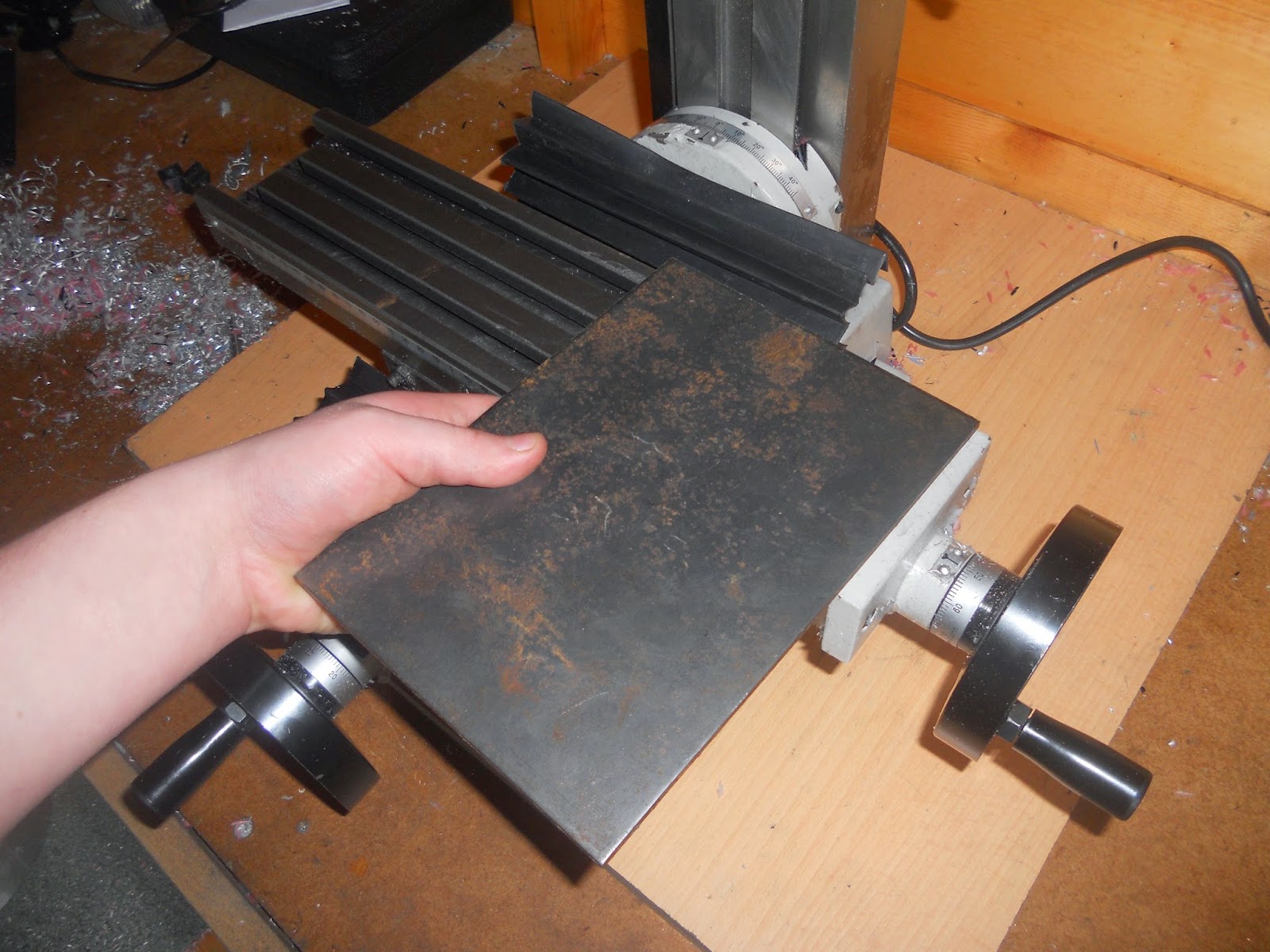 Simulation of what I want. It's always a good idea to make parts for your precision machine out of second hand skip steel. I got a few of these sheets donated by Tweedy, another feather/beetle roboteer. 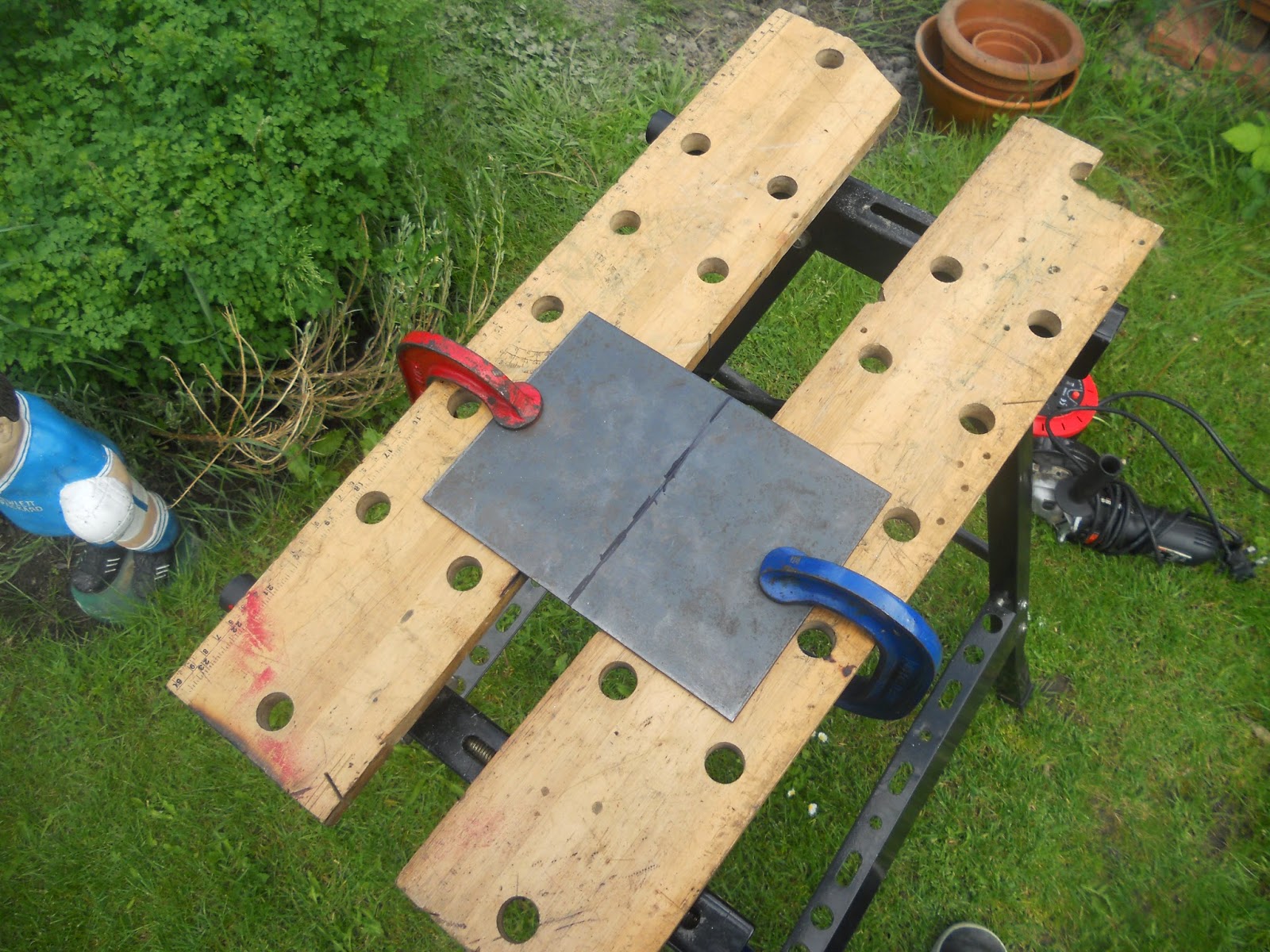 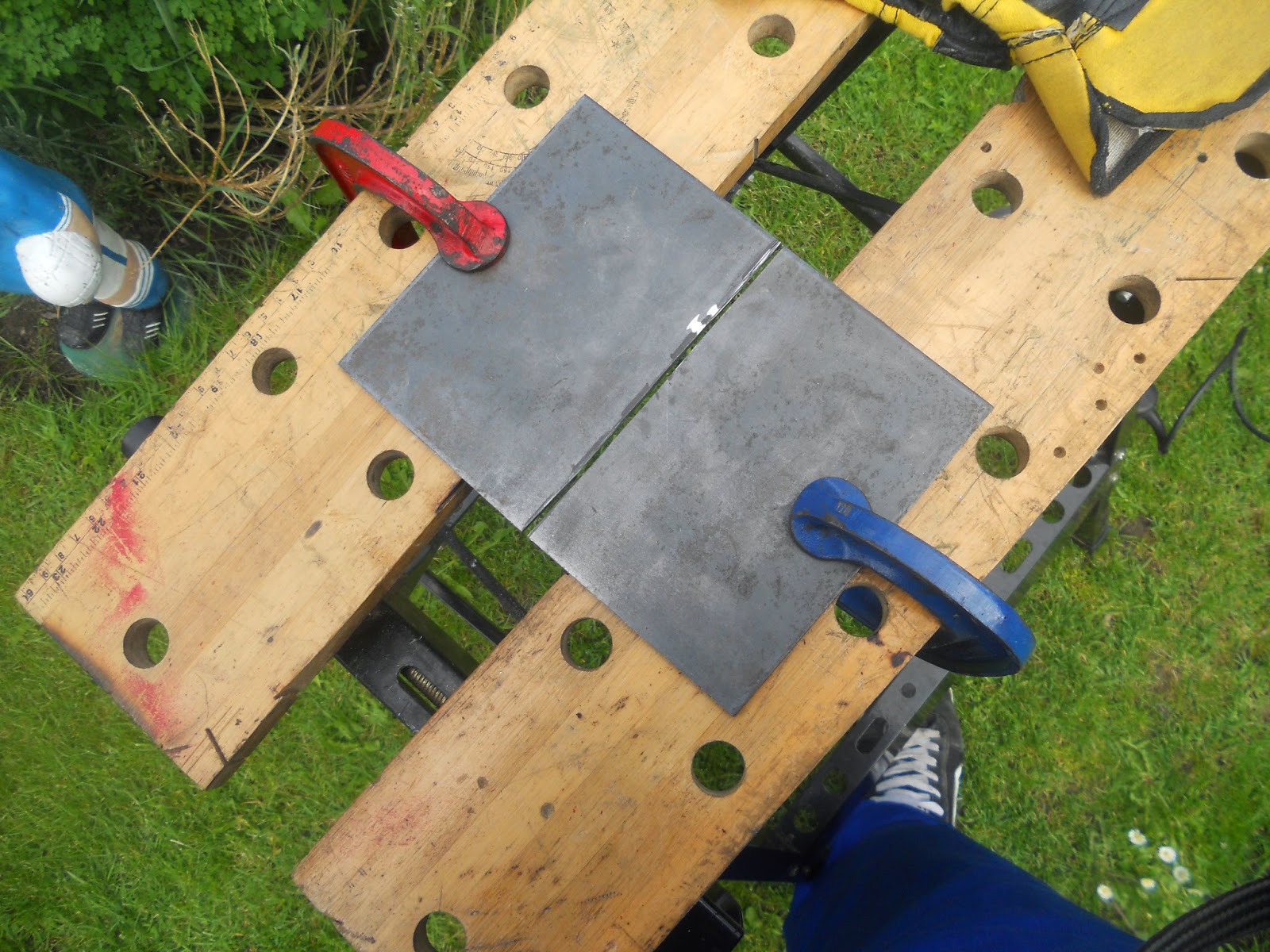 Got to play with the angle grinder again. I quite like it, being an aluminium and plastics man myself. Must work with it more often. 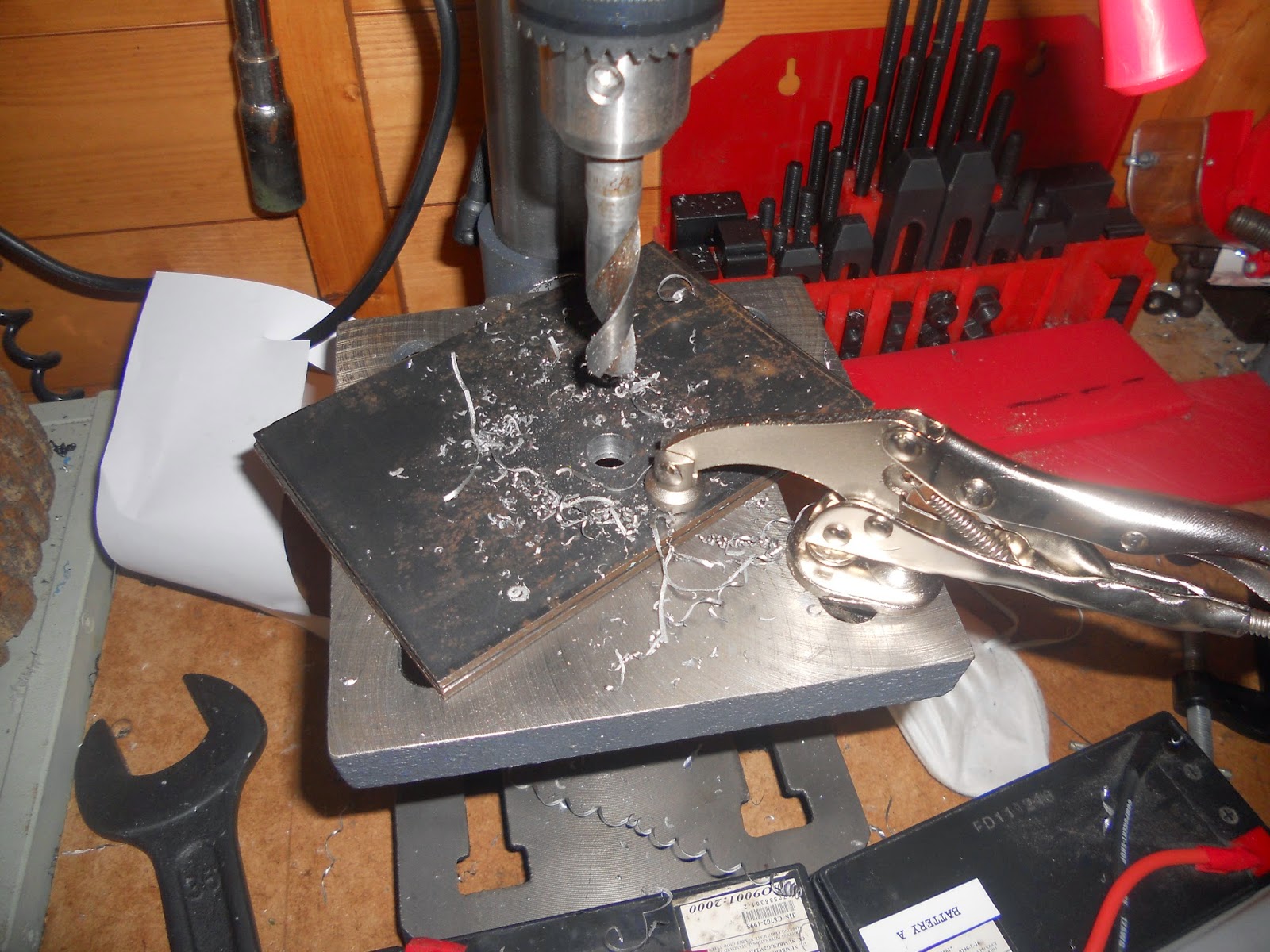 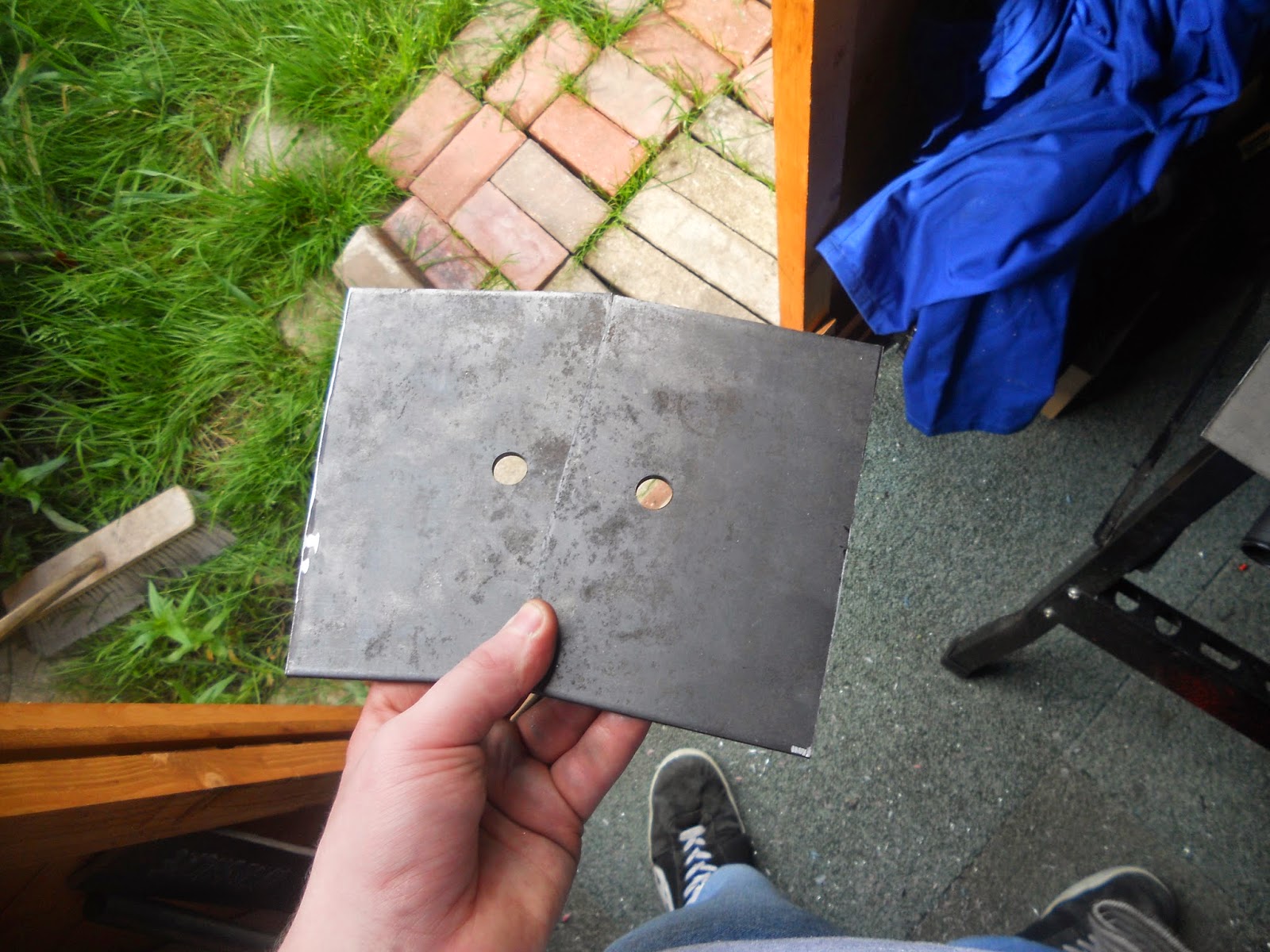 Shoved a 1/2" hole through it. No need for uber accuracy. Again, steel is nicer to work with than I thought. 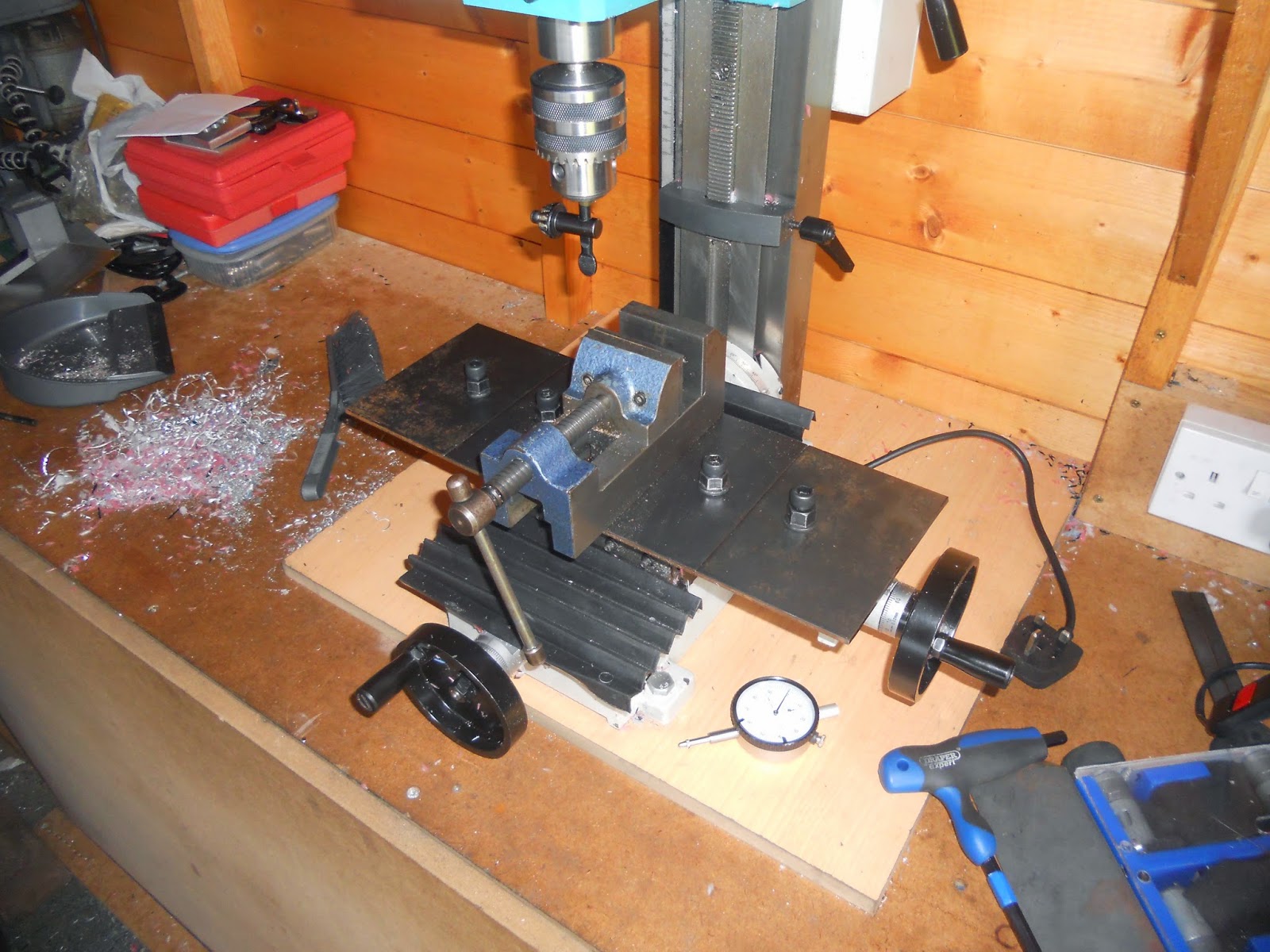 Is finish. No more crap in the T slots. Although this setup only really works with my workhorse vice not my nice toolmakers one, still good.

Also in steel related news, I finally got my arse into gear with wedge making for my 4wd drive all day beetleweight lump thing. It is just 10mm plastic and 6mm aluminium frame with 1mm stainless and 3mm polycarbonate base and lid.  Something to lumber itself around and not break. So far has worked great. Had a bit of aluminium L angle as a scoop before but that fell off because rubbish attachment. 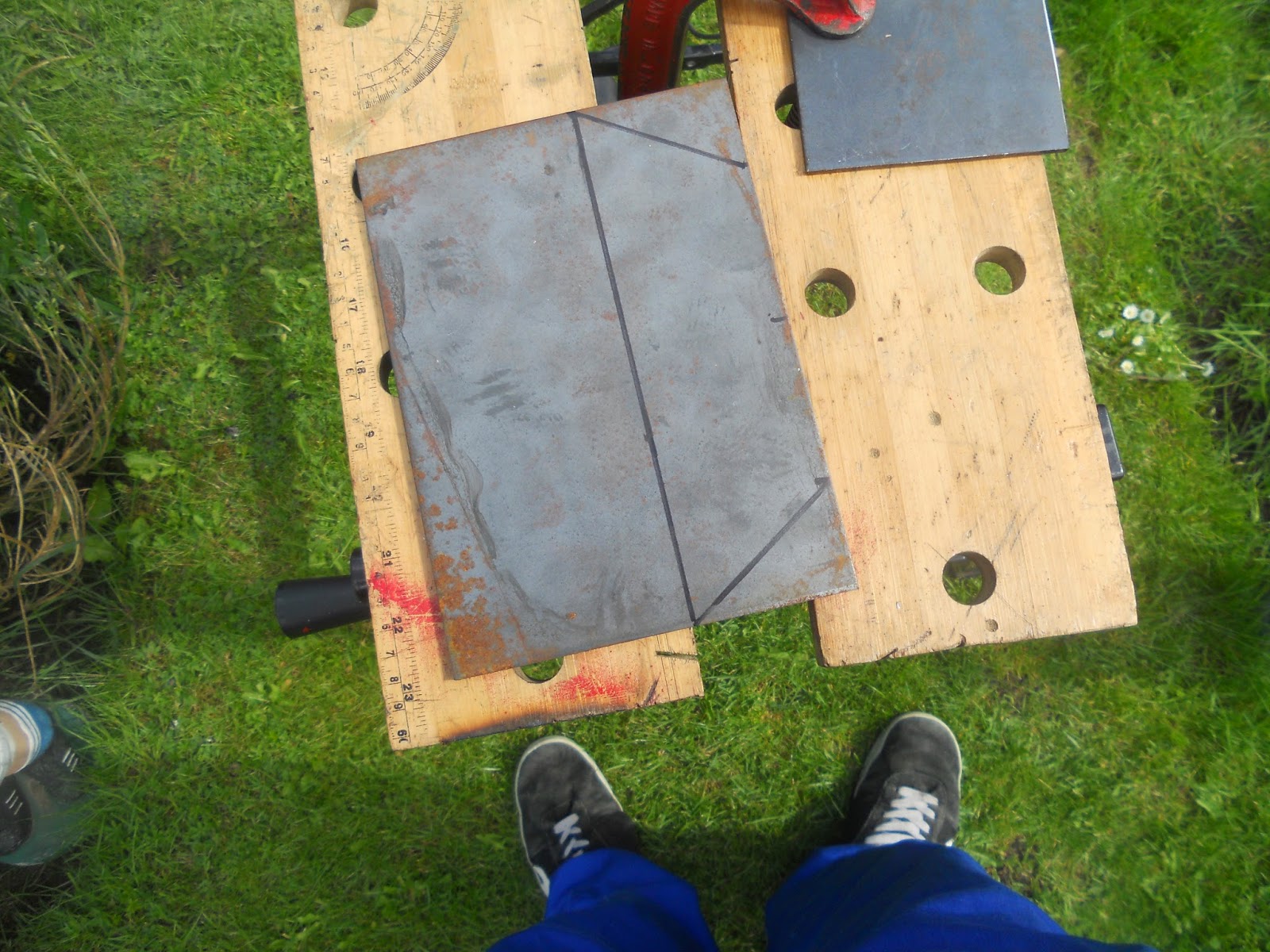 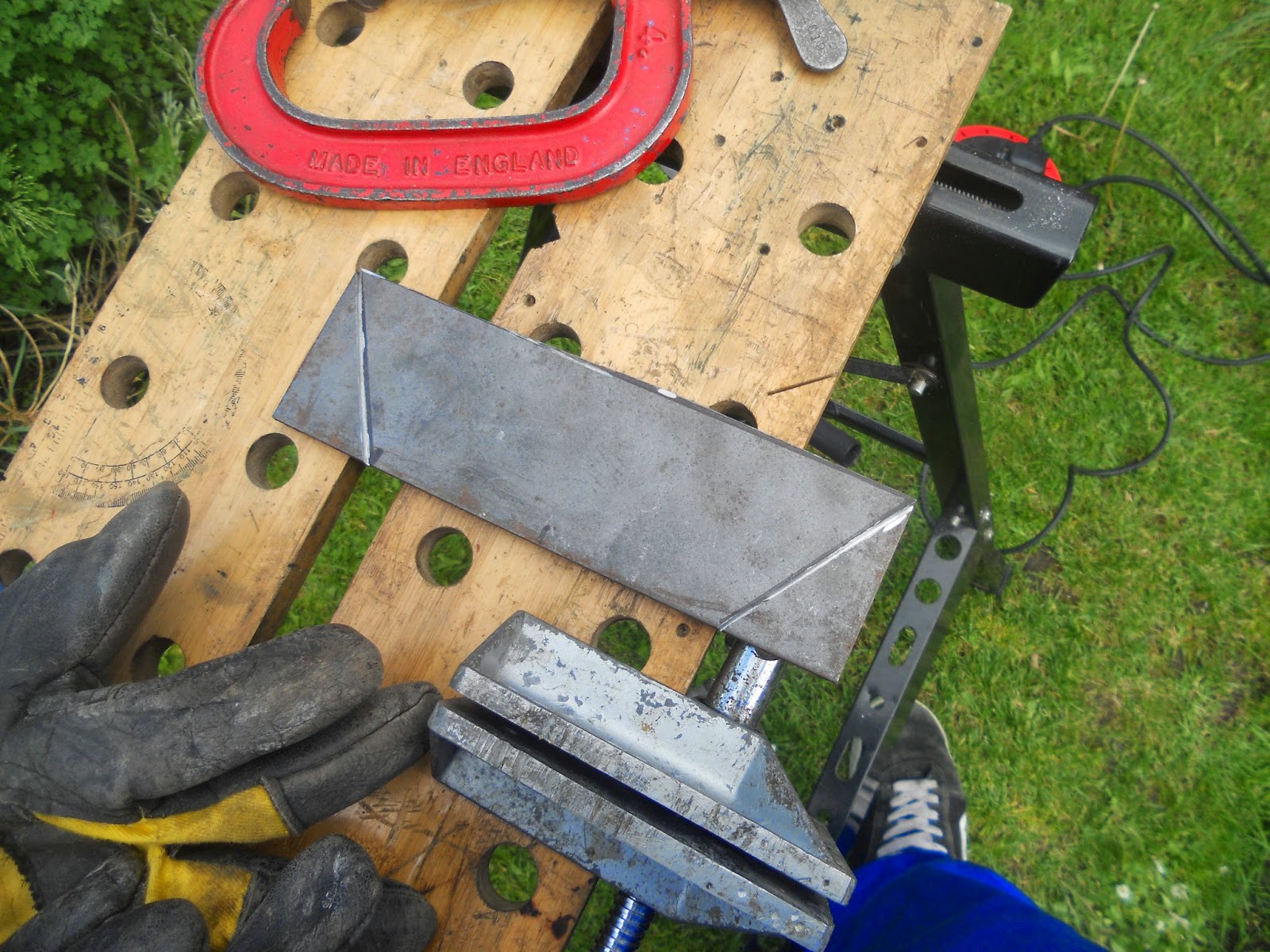 Marked out and cut me some steelage. Yum. Wedge is pretty meaty because the rest of the robot is 900g, 950g tops. Big wedge and maybes going 4s if need be should make it super wedgy, bricky and anoying to fight. 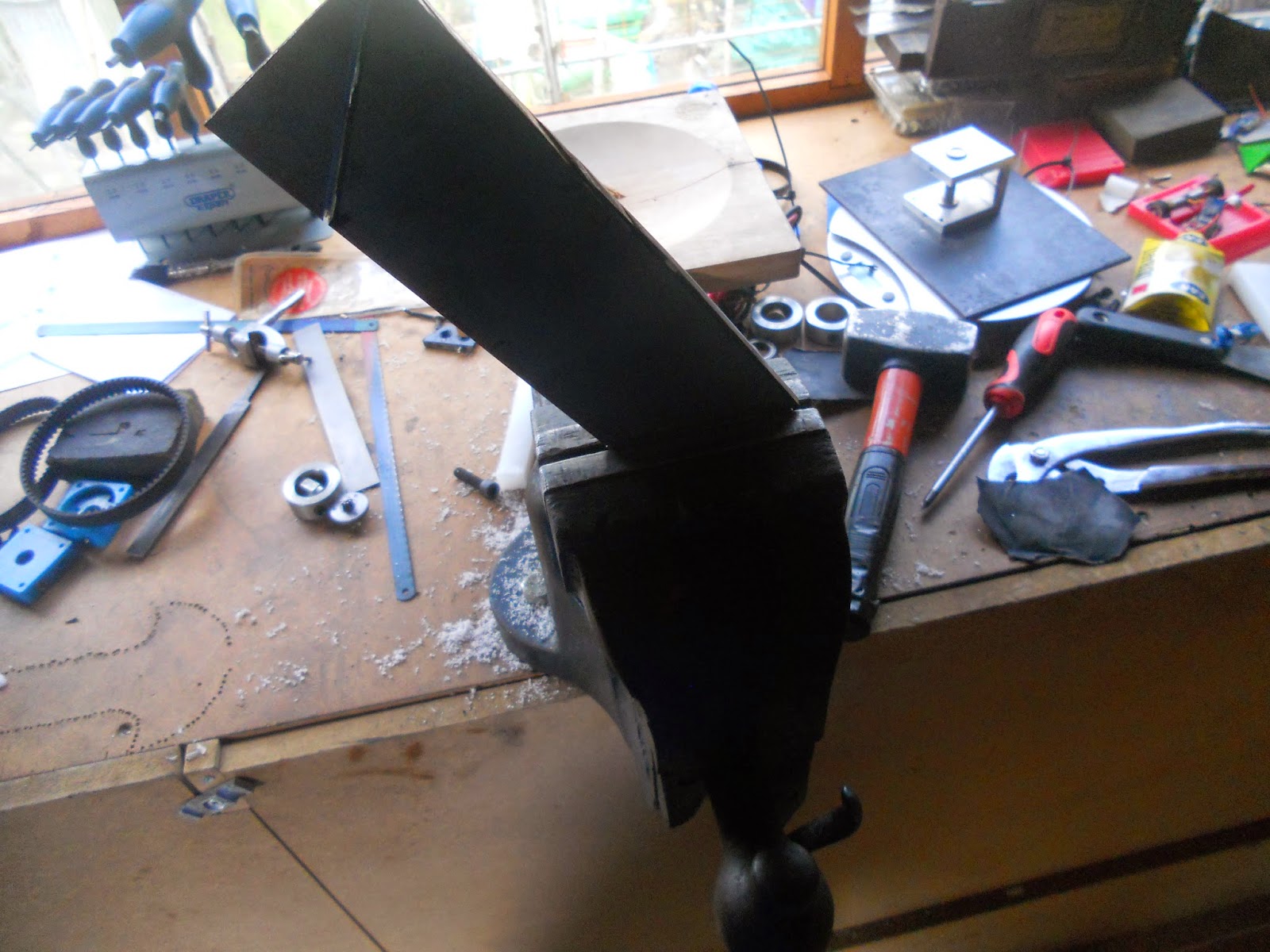 It got scored where I wanted it bent. Then once it was bent to the full extent one score would let it I scored it again and got it to bend a little more while keeping it smooth and nice looking. Briefly twatted a protractor up against it to check I could get the bends within a few degrees of each other. #precision. 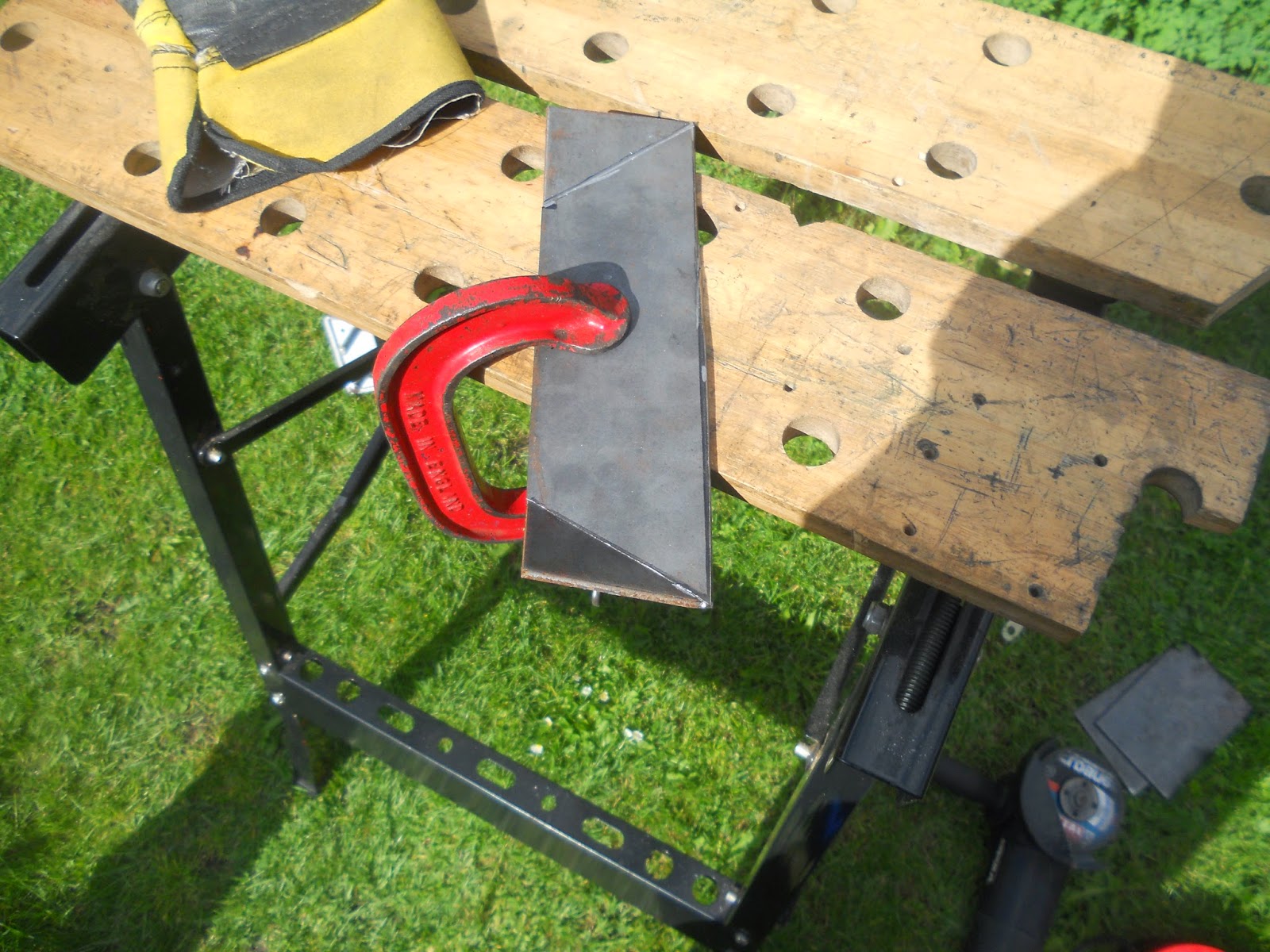 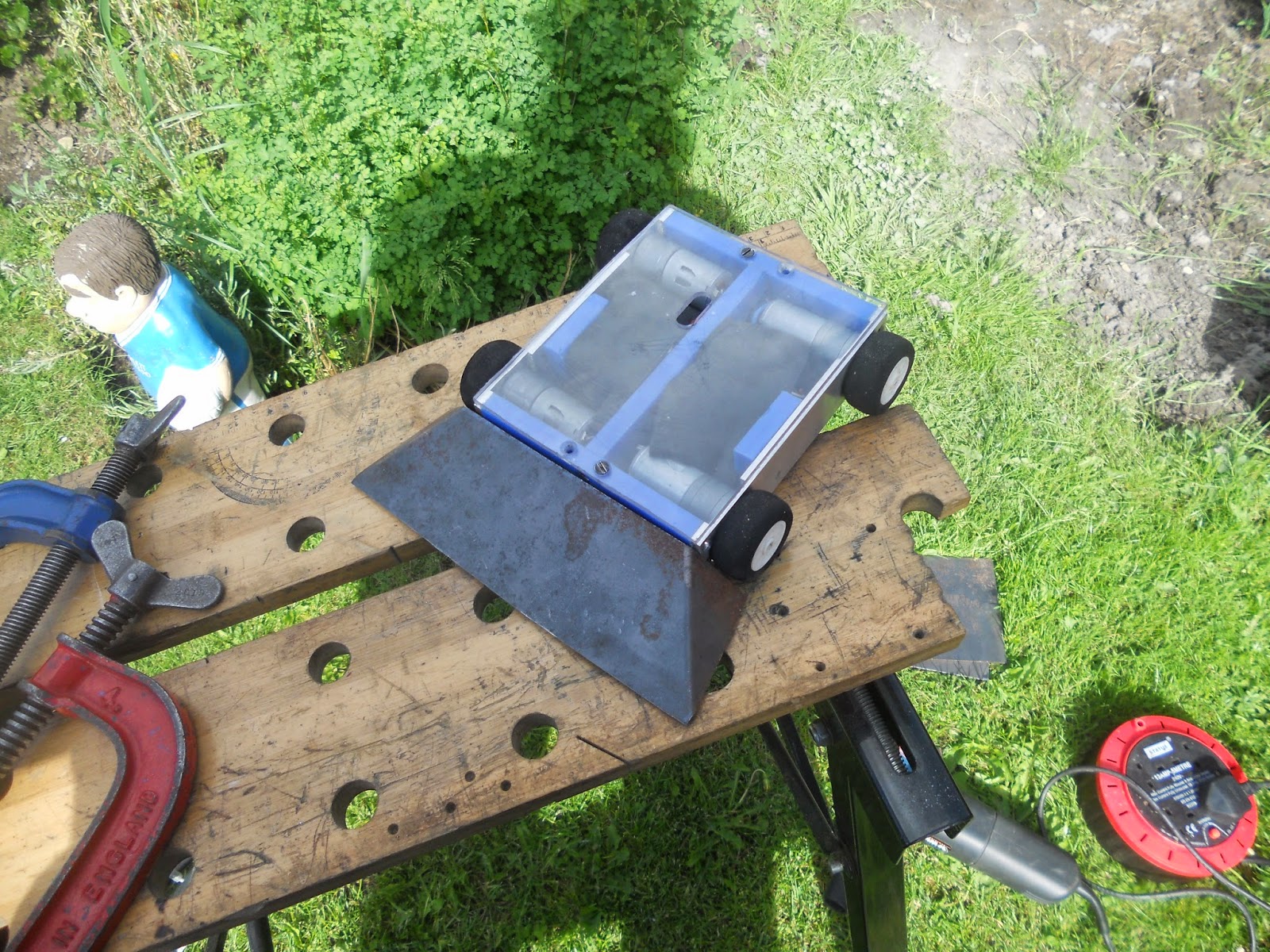 Pretend-O-Bot. Still got a ways to go in the wedge, and hinges added to it. The wedge is 420g. So it puts the weight up to about 1360g. Horrorshow. 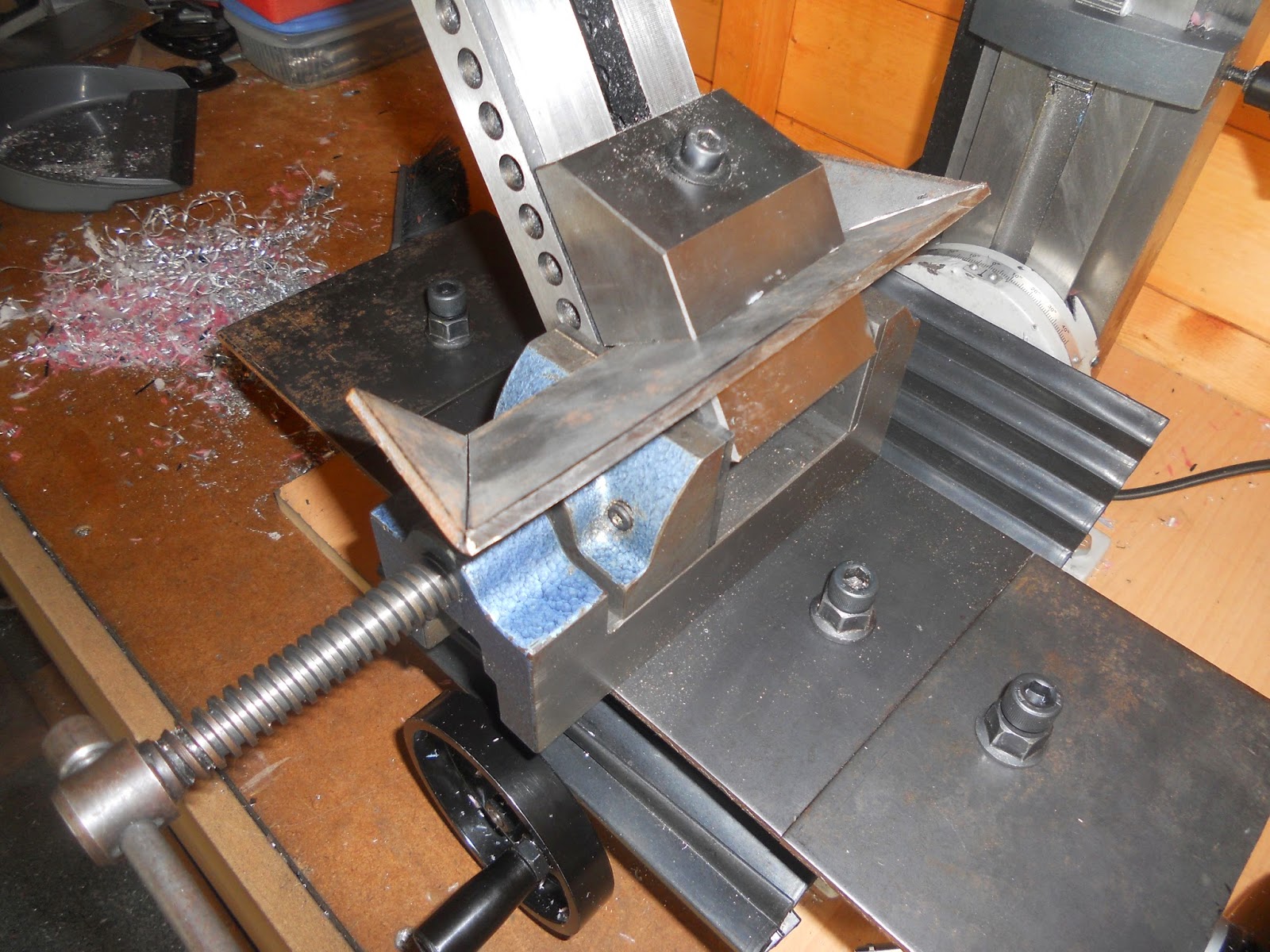 Yo dawg we heard you like vices. This is how I decided to try and get the wedge flat to the floor. A more sensible man would have ground it, but I only had cutting discs so nowt much could be done. I think I could do with some carbide tooling as I cattled a 10mm bit doing this (User error may be the cause) . I only have one carbide tool and its a 3mm slot drill. I'll look up prices for 8-12mm carbide endmills at some point and probably cry at the prices. I also need to look at prices and brands for 3" face mills. Hopefully I can get one for around £50 or so but that is very hopeful.

Aside from some Massacre CAD that's about it really.