Well it is a thing again. This is now the third proper version. It should be in a totally different class now, fingers crossed.

This design, build and documentation process is slightly convoluted for a few reasons. For my final year at college I needed to have a project to work on, so naturally I picked robots, something I would be working on anyway. This caused half the design process to be totally backwards and stupid parts covered very in depth just to fall within the project's guidelines. #education

I've tried to kind of keep shit here in a near coherent order. Focusing on one different section and talking through its own evolution at a time. Then probably splitting the actual build and assembly of the robot into a separate post.

Last year the frame was made out of 2" by 5/8" aluminum flat bar which was pocketed out to fit motors. Nothing really wrong with this, the frame didn't sustain any damage but I wanted to change it up a little bit. Smaller, tougher, higher tolerance, better designed. 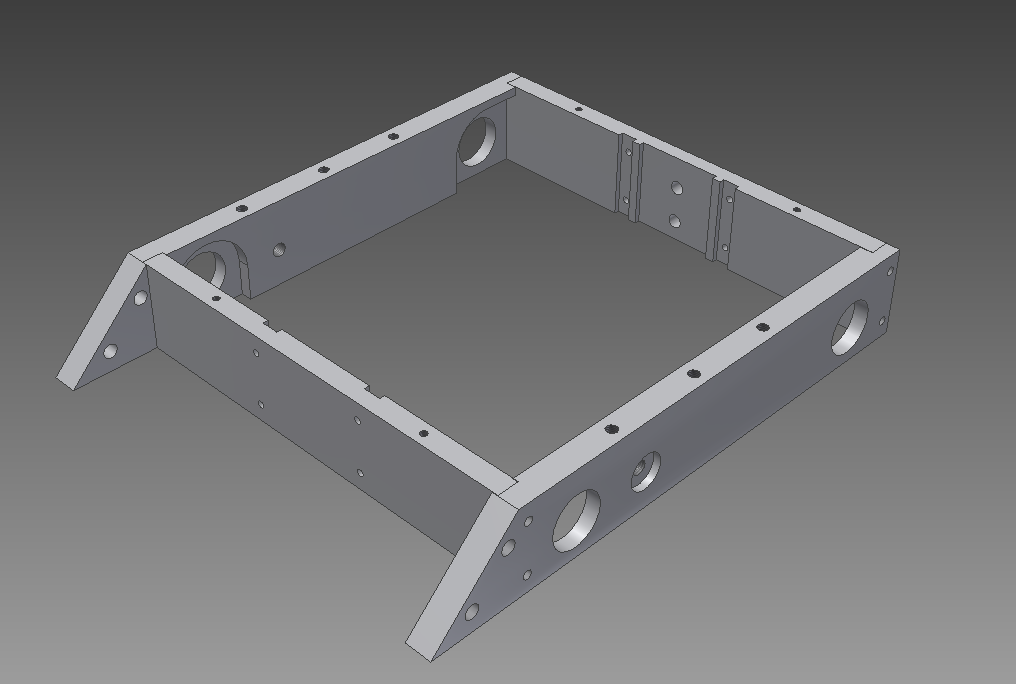 This is the new frame. Looks a lot like the old one, and it pretty much is. Bulkheads are 15mm thick on the side and the cross braces are 12mm. Main difference though is this is alumec 89 which is a very high grade aluminum alloy. It has strength comparable with steel.  It ended up getting CNC milled by Ed Wallace of DB5, DB10 and Turbulence fame. He did an incredible job and the parts came out fantastically. 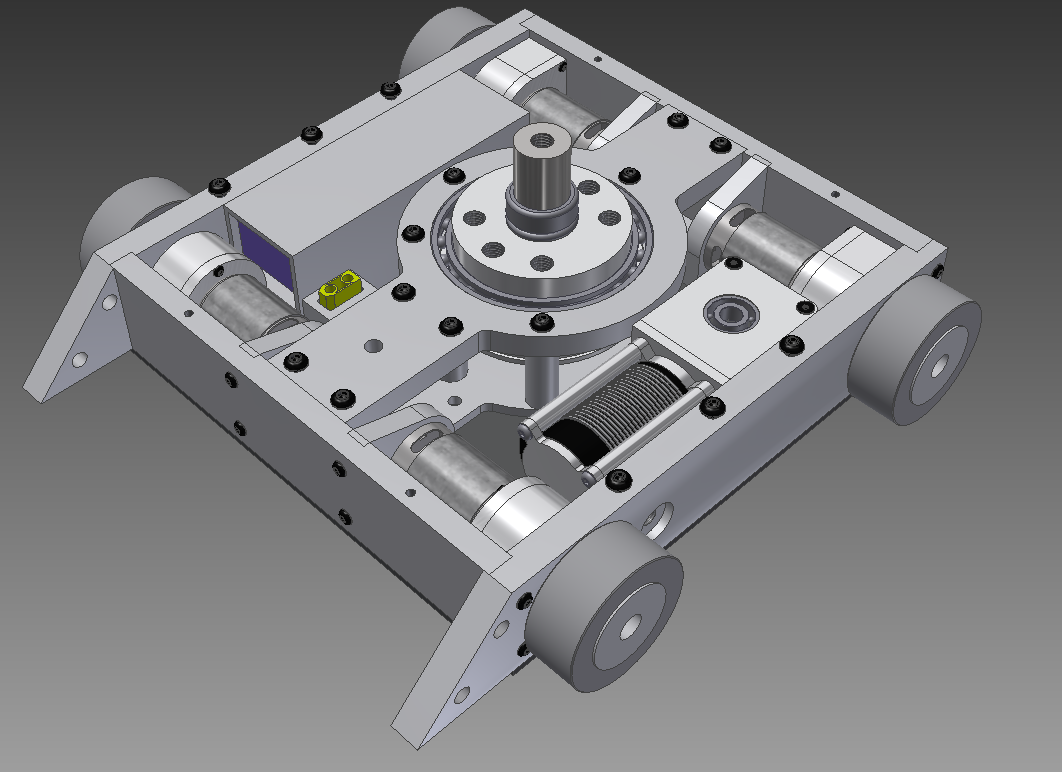 A more fleshed out CAD here. Notice the weapon bearing system. Late night shit talking with Ellis Ware  on how to make the weapon system not suck and be so weak.

It used to be just a simple dead shaft bolted to the baseplate which I wasn't particularly happy with. Ellis had the idea of using the biggest bearing known to mankind (100mm OD, 80mm bore) to fit around the pulley while still having a dead shaft and bearings in the centre. Hella strong! The alumec frame for the weapon system added yet more strength.

When in the robot, the shaft is both live and dead. I give you, Schrodinger's Shaft. Or Zombie Shaft If you're that way inclined. 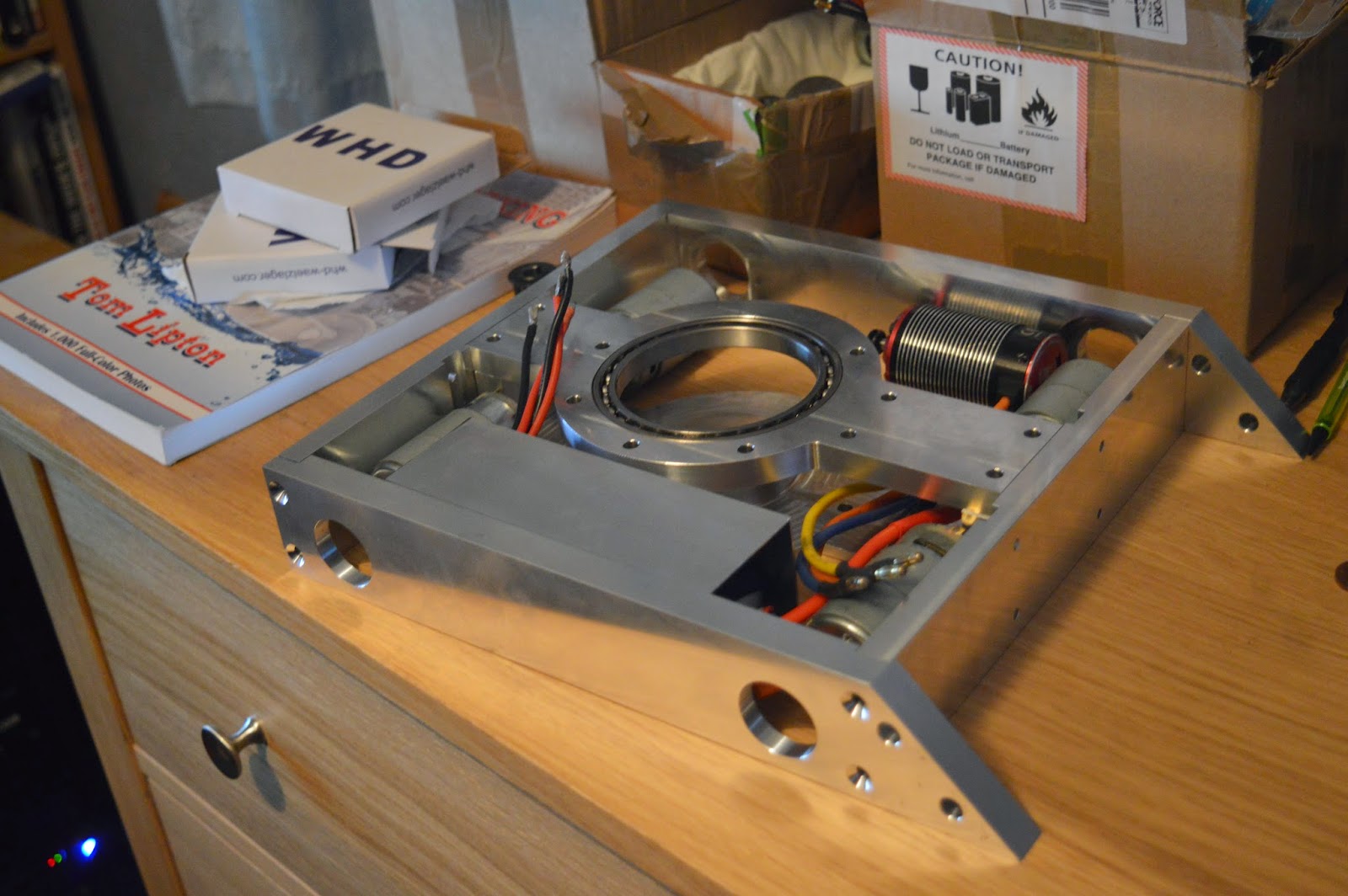 Here you can see the frame after it had been beautifully milled by Ed. I shoved my manually milled box section battery box of shame and some other components in there for a Pretend-O-Bot and just kinda marveled at how fucking shiney it is! Loogadit! Shiney! 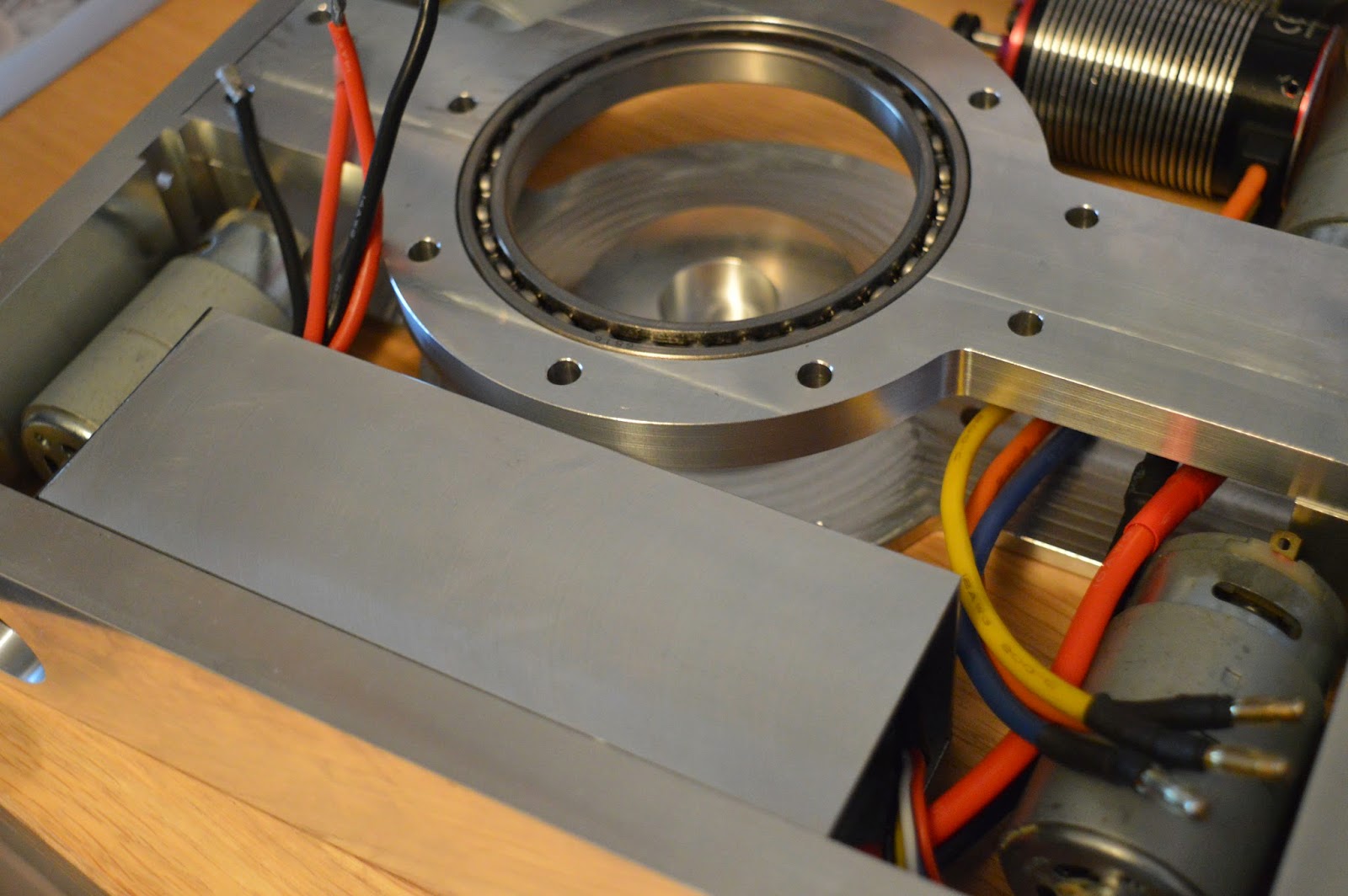 Dat finish doe, hnggggg. Seriously its fantastically done. Tolerances are hella tight and parts fit smoothly and perfectly.  Close up on my big ass bearing. Can  you belive RS components wanted like £90 for one. I ended up ordering German and getting 3 for 40 euro (£30 or so) which arrived quicker than bearings I ordered from the Uk on the same day. 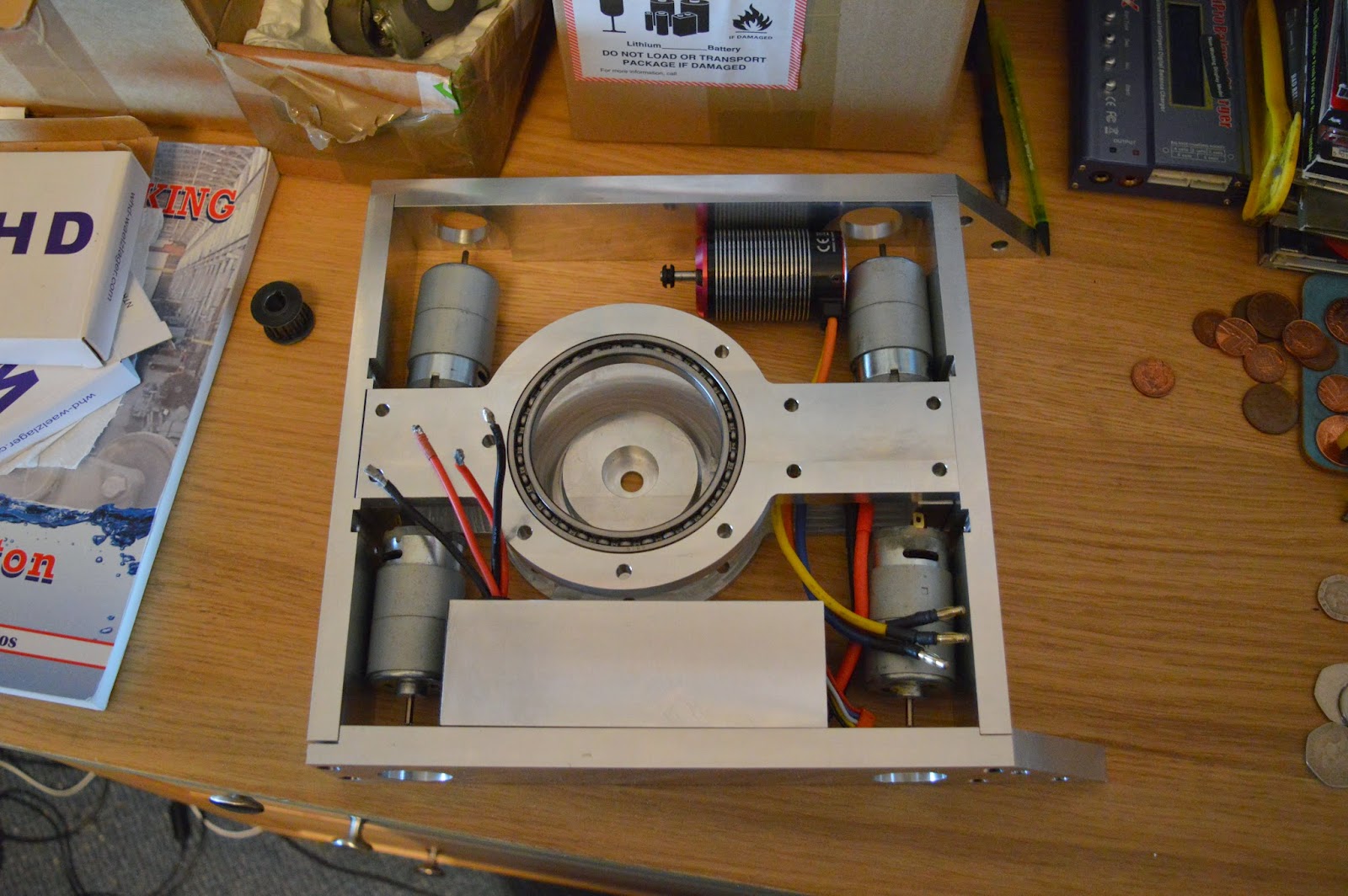 Small robot is small if you hadn't noticed.

Is more or less the same as last year, the year before, same as every drive I've had. Good old drill gearboxes. In slightly nicer cases however.. 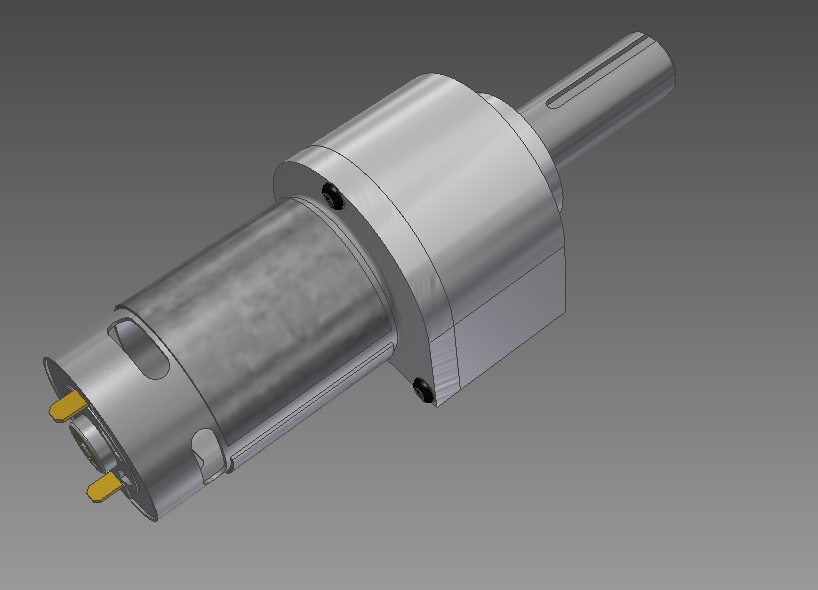 Internals are your common or garden cordless drill gearbox inside a CNC milled aluminum housing with dual bearing supports and a beefier output shaft. Gone are the days of shitty 12mm mystery steel with 3/8" external threads and LH M5 internal. Today we welcome the new era of 17mm silver steel with a keyway instead. It will either go badly wrong or it won't. One of the two.

I haven't had quotes for the gearboxes yet so if they are going to be hella money I'll have to get creative.

Motor wise I was planning to run a fairly standard 12v 550. However I didn't actually have any. (Massacre last year ran on 18v motors and promptly broke all of them or donated them to other teams once out of the competition) Trouble was I didn't fancy paying stupid money for a new set. Gimson robotics stopped selling them and they were like £8 anyway. Ebay just turned up a lot of really weak and benign versions that, while cheap were woeful on the power front. Outlook = bleak. I was at a model engineering exhibition up at ally pally in mid January, I'd crashed at Ellis's with his family who are super super nice people, me and him spent the day wandering around poking interesting tools (I accidentally bought a lathe).

After a while we found this. Thank you robot Jesus!

These looked very weird/interesting indeed. They had a very high speed and theoretically not much power. However they were very nicely made. Close inspection and twiddling of shafts (#moulds) revealed that these had very thick windings and fairly strong magnets.

£4 each or 3 for a tenner, I wasn't going to say no so I got 6 of the buggers.  I kind of wish I'd got more but I was already lugging about 35lb worth  of crap around at that point and was running low on funds. 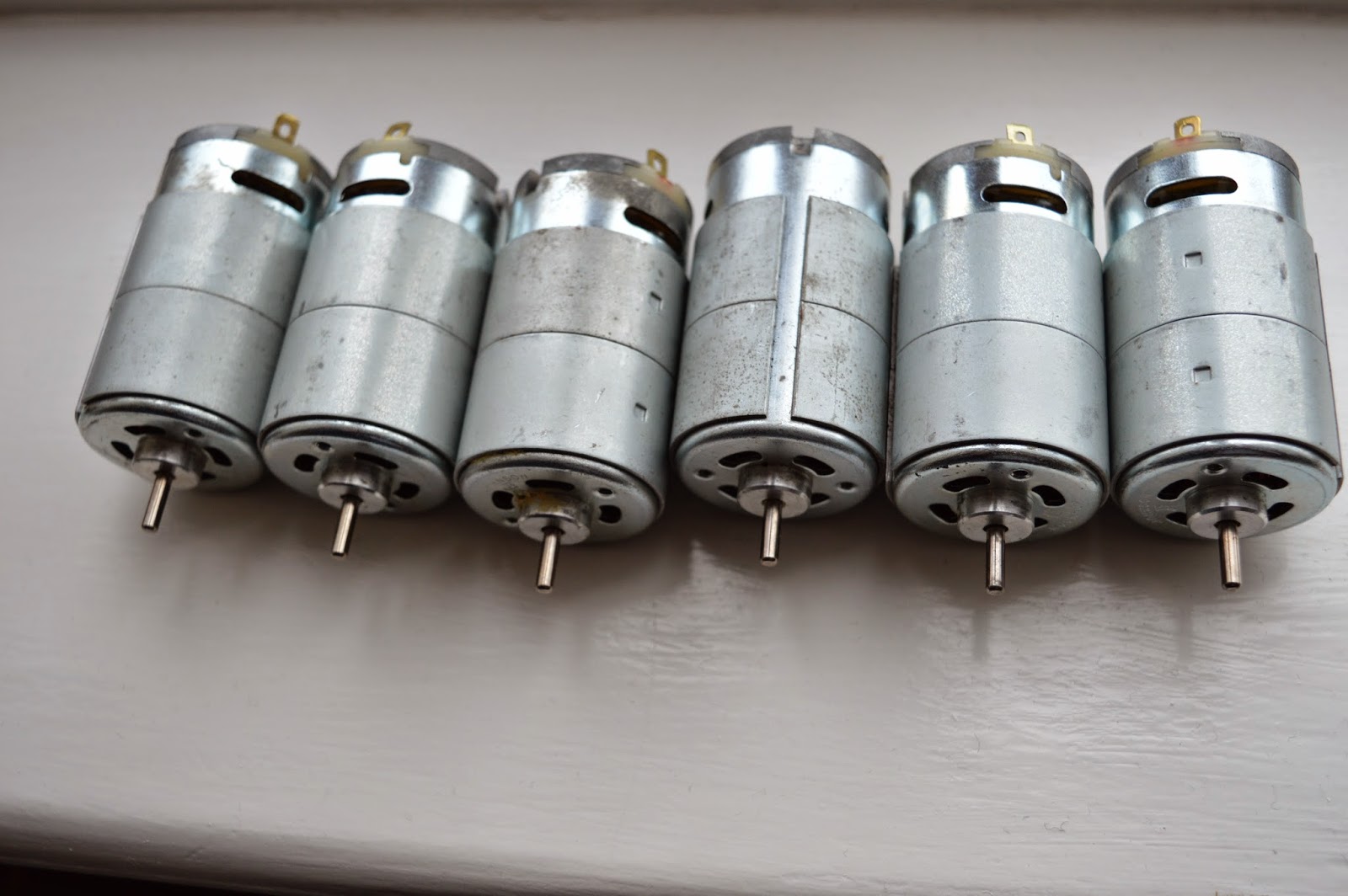 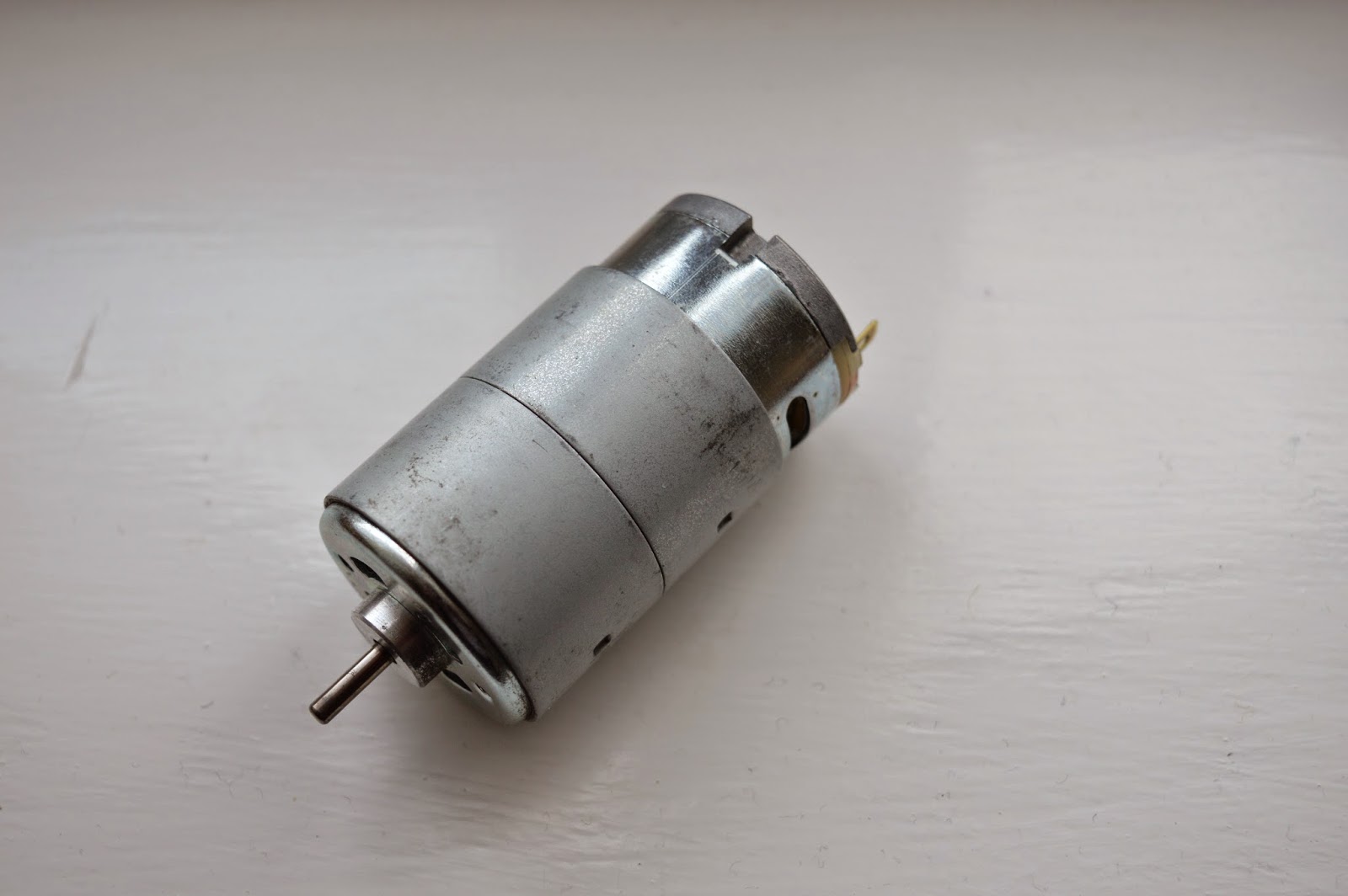 Flux rings on the motors are really thick, which is probably a good sign. They do seem nicely made 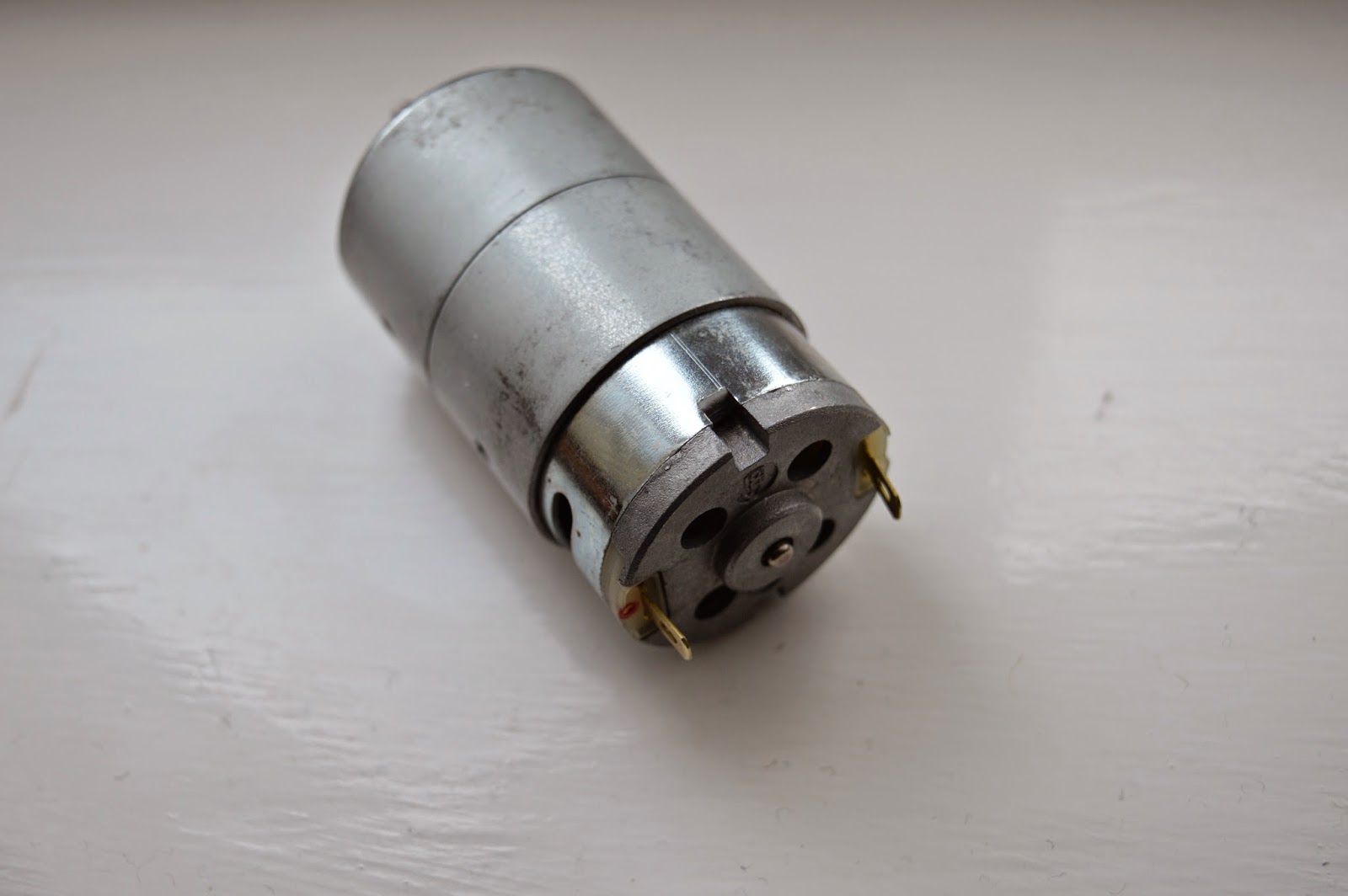 Bae motor got a booty. Yeah the endcaps of these motors are a little different. Some kind of dull cast metal. Heavy duty. Brush housings look standard and the taps are very thick.

Now for the more interesting bit. I took some measurements of power, sadly no rpm measurement more accurate than eyes and ears.

The spec sheet (i.e. bit of card taped above the bucket of motors) stated 26000rpm and 2a @12v
Normal 550s are close to 20000rpm at their nominal voltage which suggests these aren't 12v native.
Using a bit of basic mental maths you can see they run 20800rpm @ 9.6v. That's more like it. Asking the bloke on the stall clarified these were 9.6v motors and that they did in fact come out of drills, cool!


I did some testing of my own. If it was true and the motors were going to run 24w no load then that would be very much on the low end but I'd see what they pushed when stalled. Run through a gearbox on 4s lipo they pushed 75-80w just idling, that jumped up to 90w when the gearbox was stalled by hand. Thats more than powerful enough for my needs. £20 of motors well spent, and I have spares, it's like christmas in February!

Wheelwise I went for a stock solution. No real reason aside from cooler looks and an easier thing to carry spares for. I would have had to mangle my wheels from previous years to use them again. I'd rather keep them useable and try something new.

I went for 2.5" colson caster wheels from Robot Marketplace  Getting 60mm ish wheels is a pain in the arse and getting them the right shore for combat is more painful than getting kicked in the face by a powerful horse. Colsons seem good. Americans do robot combat hardcore like, and if they are good enough for them I'm more than happy with them

I got a load of these, so hopefully I should be okay throughout the competition. I will have to machine the wheels to take a hub that will mate with the shaft. They come with a plastic bushing as stock which will removed before I use them

As was made painfully clear last year, the bar simply wasn't up to it and the tensioning system was frankly piss poor. To fix this I plan to be less of an idiot. 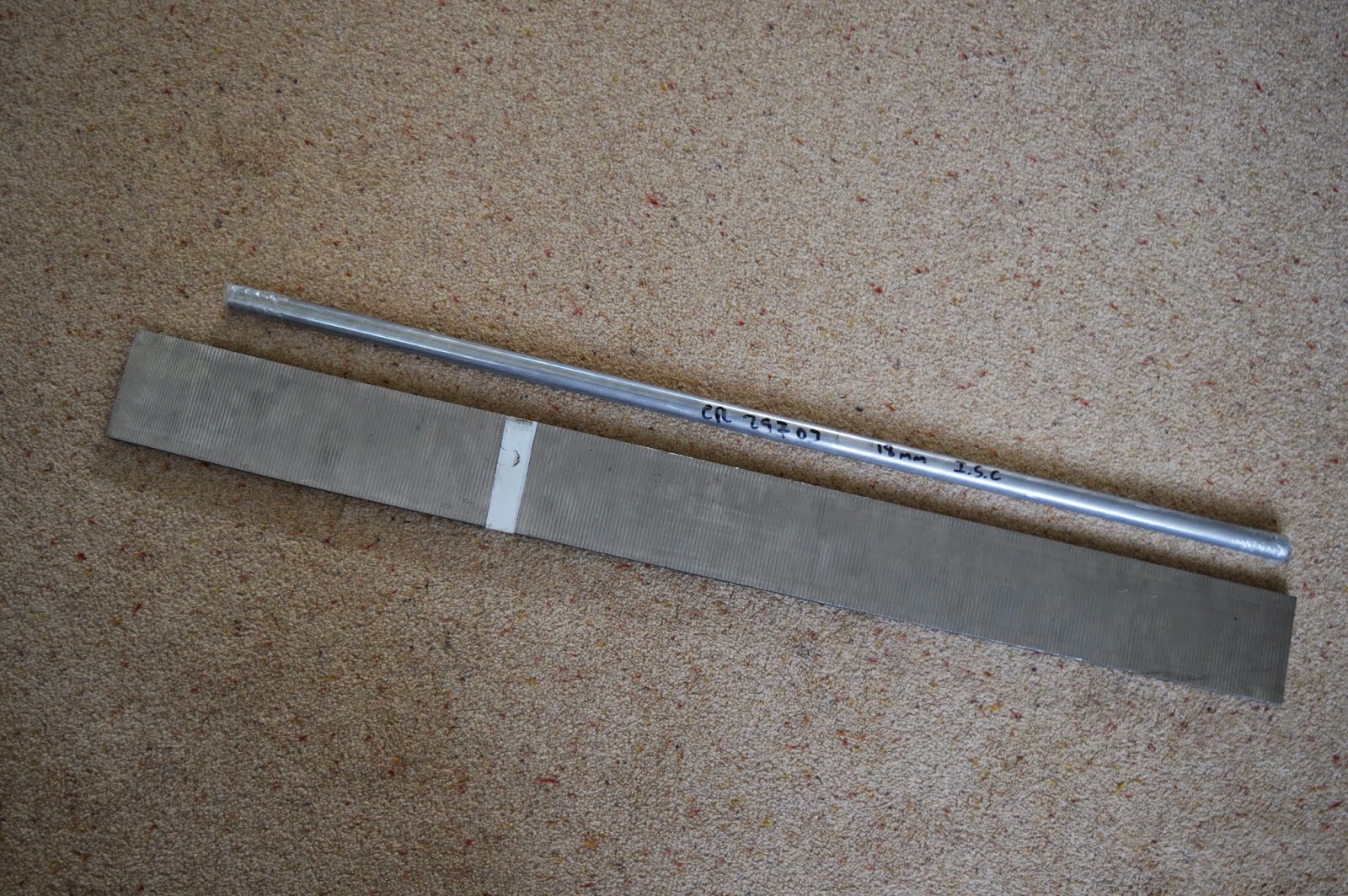 Oh, and also titanium. The large piece of titanium was given by Dave Moulds, the smaller round is 7075 aluminum for use as standoffs. More on this and its Toolox teeth as they happen.

The ti should be much better at dealing with the forces from combat and its lightness allows me to strengthen it. Overall the bar assembly is about a kilo heavier than last year.

Power comes from the same motor as last year. Running a lower voltage but should still be pushing about 2kw of power. Same style of right angle gearbox, then a pulley reduction. Fast motor and large reduction should cut spin up time for a minimum.

This is just a post to get the ball rolling as it were, more stuff and more pictures will follow when shit actually gets done. When the chips are flying the camera will be snapping.