Hey people. Should be a fairly picture/progress heavy update because shit got done in the past month or so.

First on the list is new toy! I paid for/ordered my lathe in mid January and it turned up about 3 weeks ago. Sufficiently meaty bastard to match its owner. This is a WM 250 from the fantastic Warco. I got it for just over a grand because I got a great trade show deal. The machine itself is fantastic, I love working on it, the restrictive feeling I get when working on my mill. 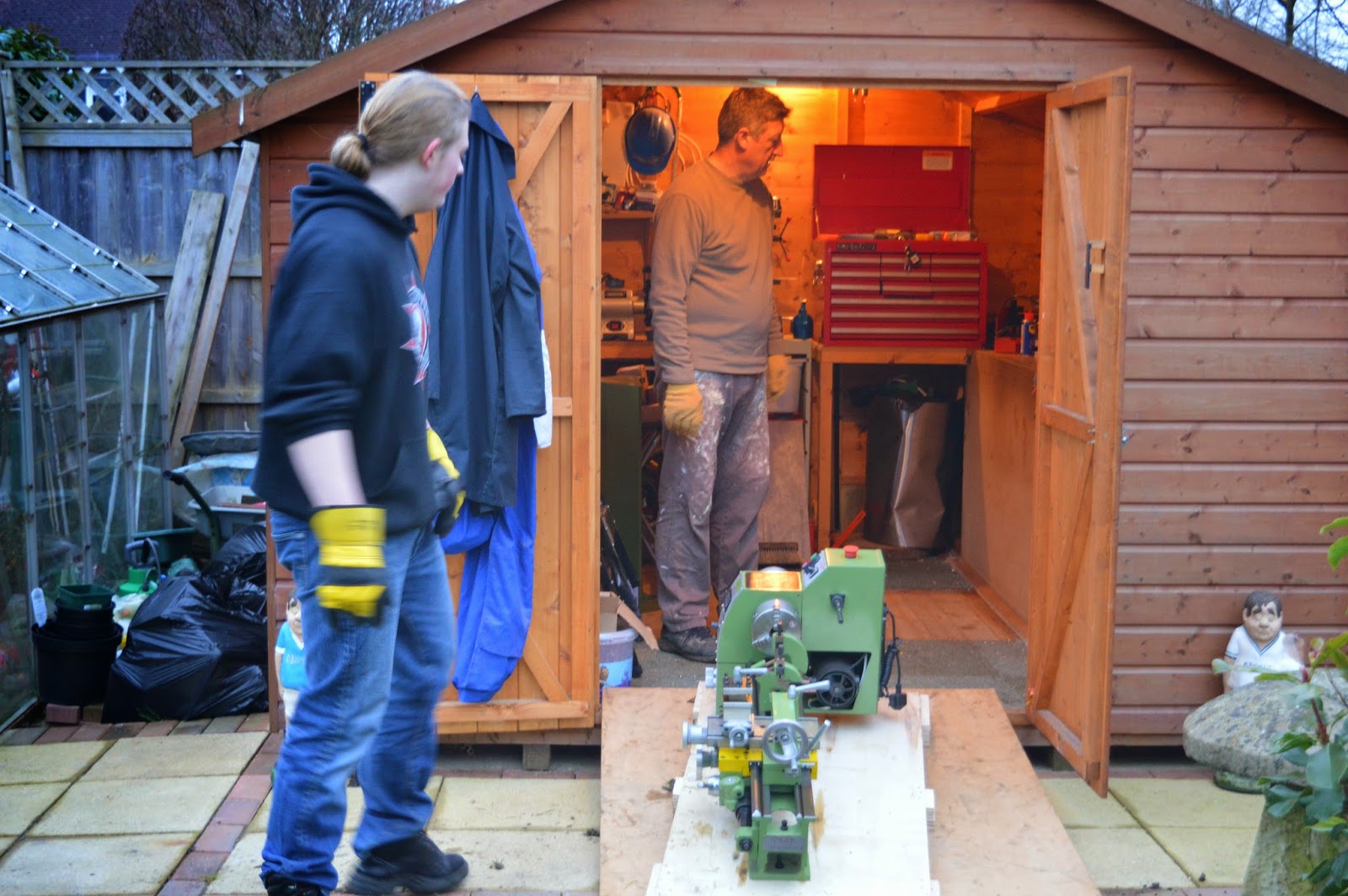 This was getting the damn thing into my workspace. 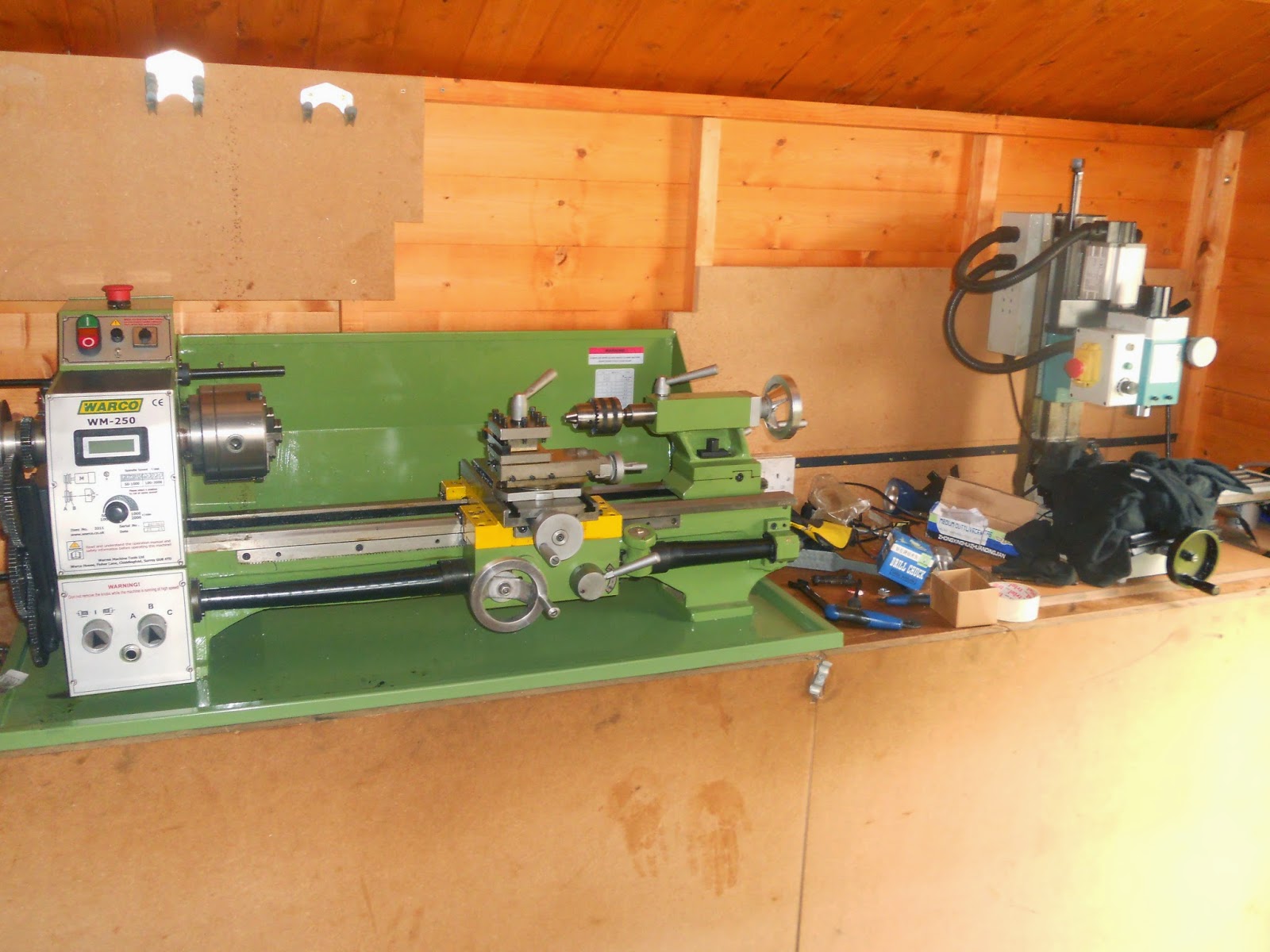 Where it lives now. I can use both machines unrestricted which is nice. They don't clash at all.

My RobotMarketplace order finally showed up. Customs decided to charge me one arm and one leg and a few fingers as well but that is to be expected. 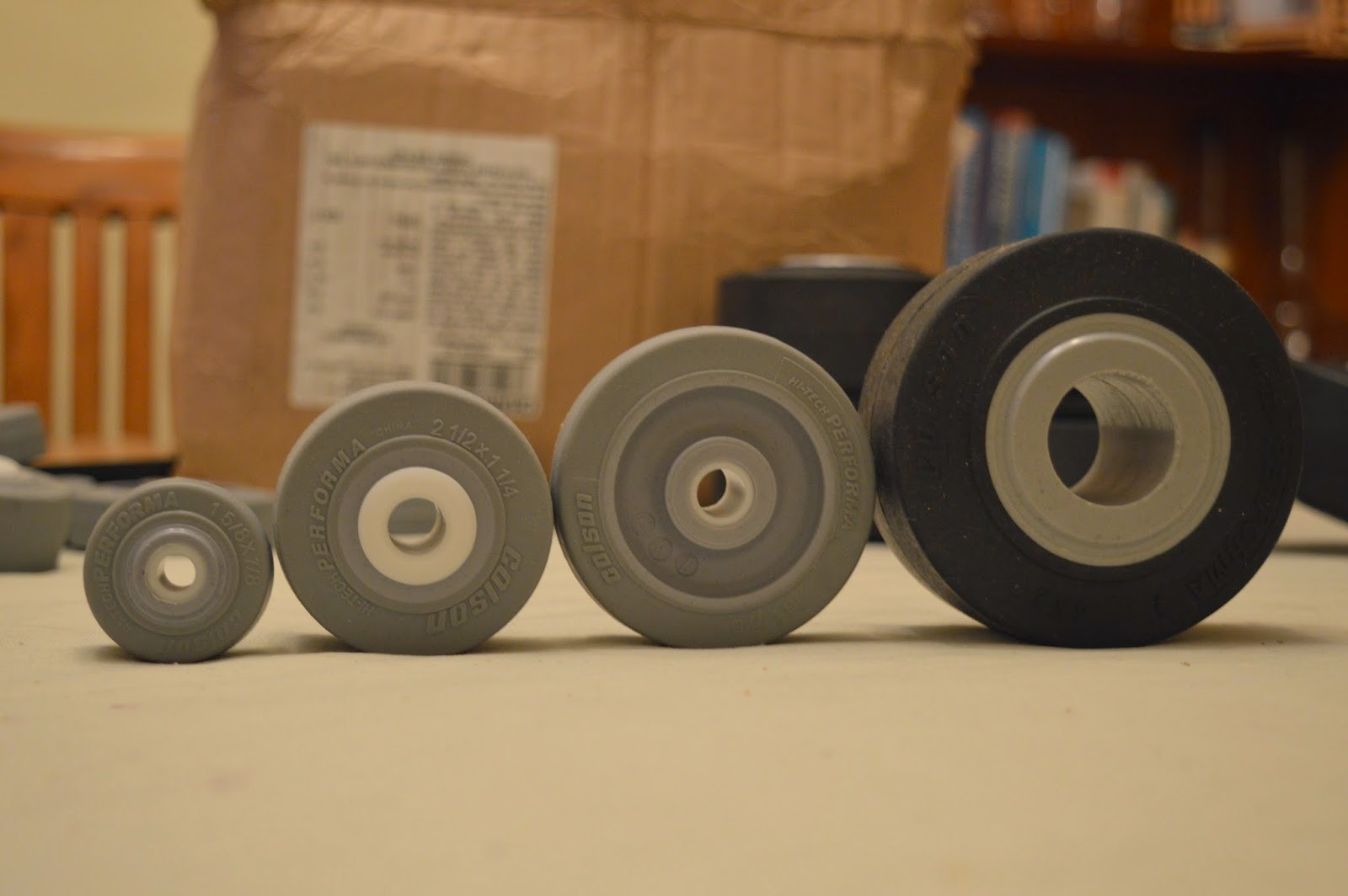 2 smallest wheel sizes are for me. Smallest are for beetleweight shenanigans and the 63mm ones are for Massacre. The other ones are for other people's robots. 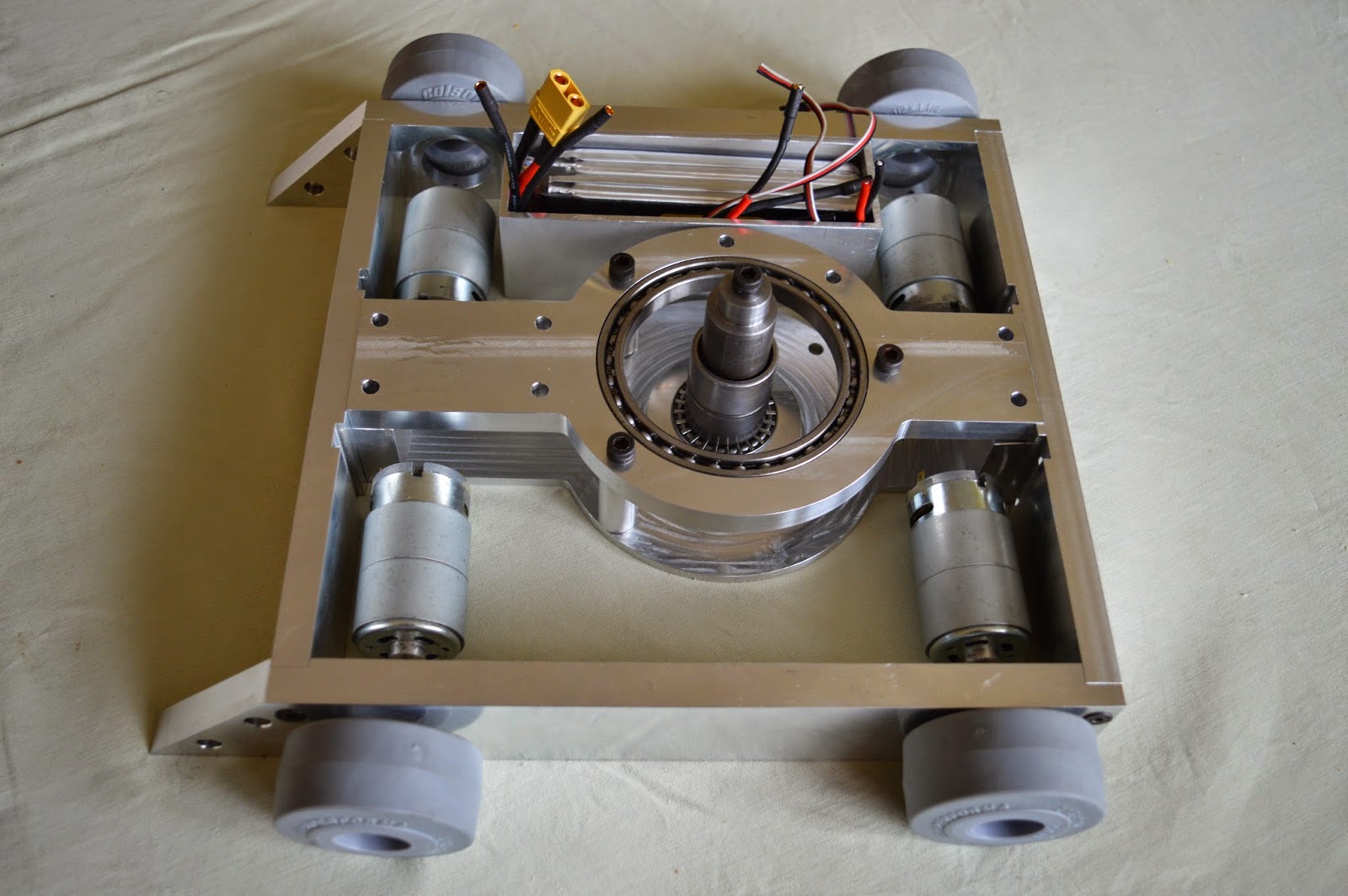 Random arse end of steel in there for Shaft Simulator 2015. There are 3 7075 standoffs I made in this picture. I felt compelled to pretendobot at this stage. Delrin bushes removed from colsons and they have a plain bore now. I machined a new faceplate for my brushless inrunner weapon motor. It is also  sporting an enlarged shaft and much bigger bearing. The new faceplate is made out of 13mm 6082 aluminum. 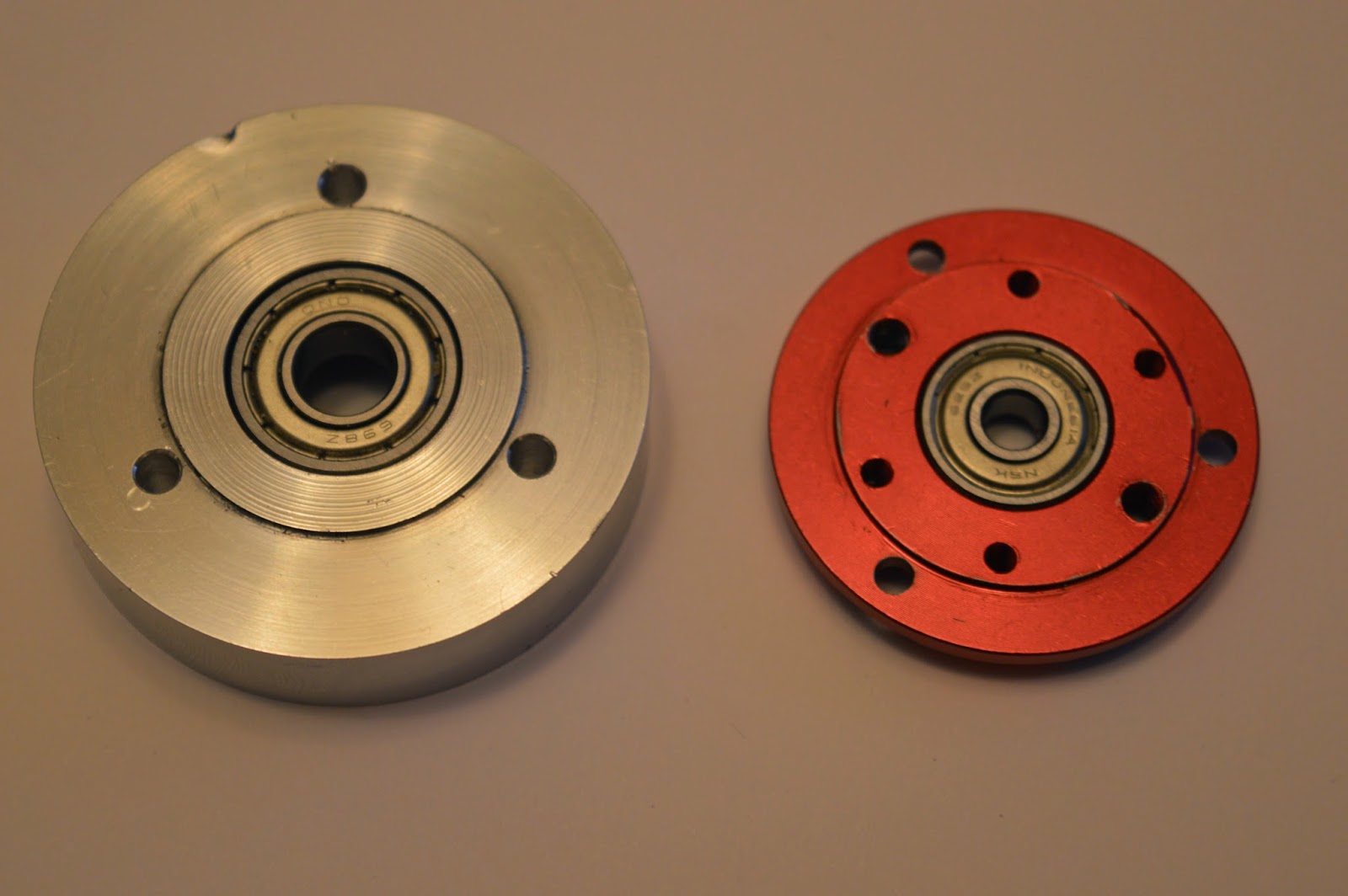 The dink in the new part brings shame upon my family but you can see the upgrade. Gonna go for 6 mounting holes instead of 3 and going to go for M5 threads over the M3 for attaching the motor to gearbox 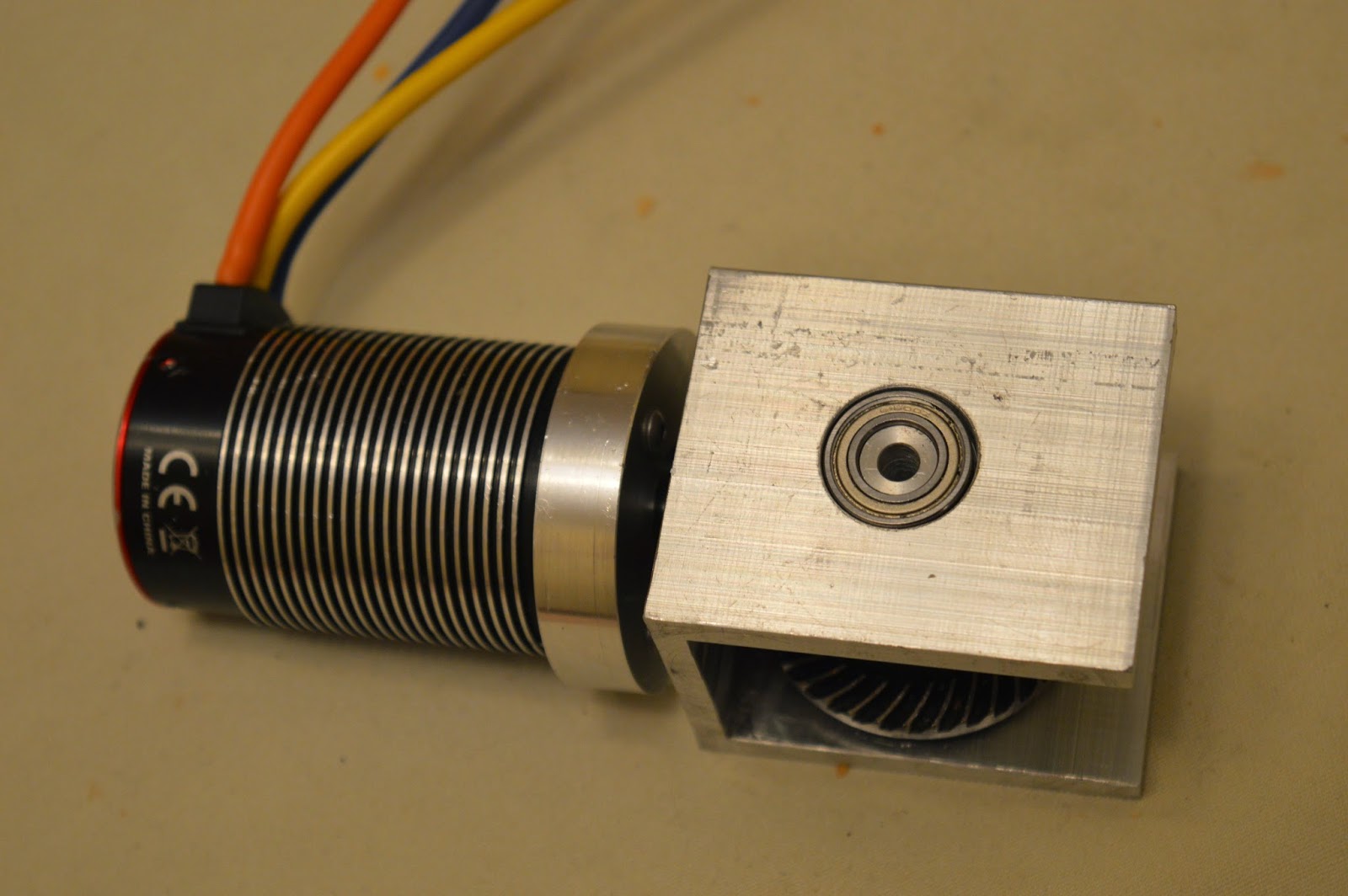 Speaking of gearboxes.. Here is the new rangle setup to drive the weapon. Same basic design as last year; custom U channel made out of 6082 and grinder gears. Some changes though. Ball bearings to replace the bushings and newer less terrible gears with a higher reduction. 3:1 over 2.5:1 of last year. The bearing pocket at the top looks off but only the first mm or so is, I accidentally took to large a cut for my final pass and quickly noticed. I'll fill the gap with epoxy and enjoy my stay in engineer's hell. It needs a clean up and obviously to be bolted to the motor, but thats it mostly done with the minimum of pain. 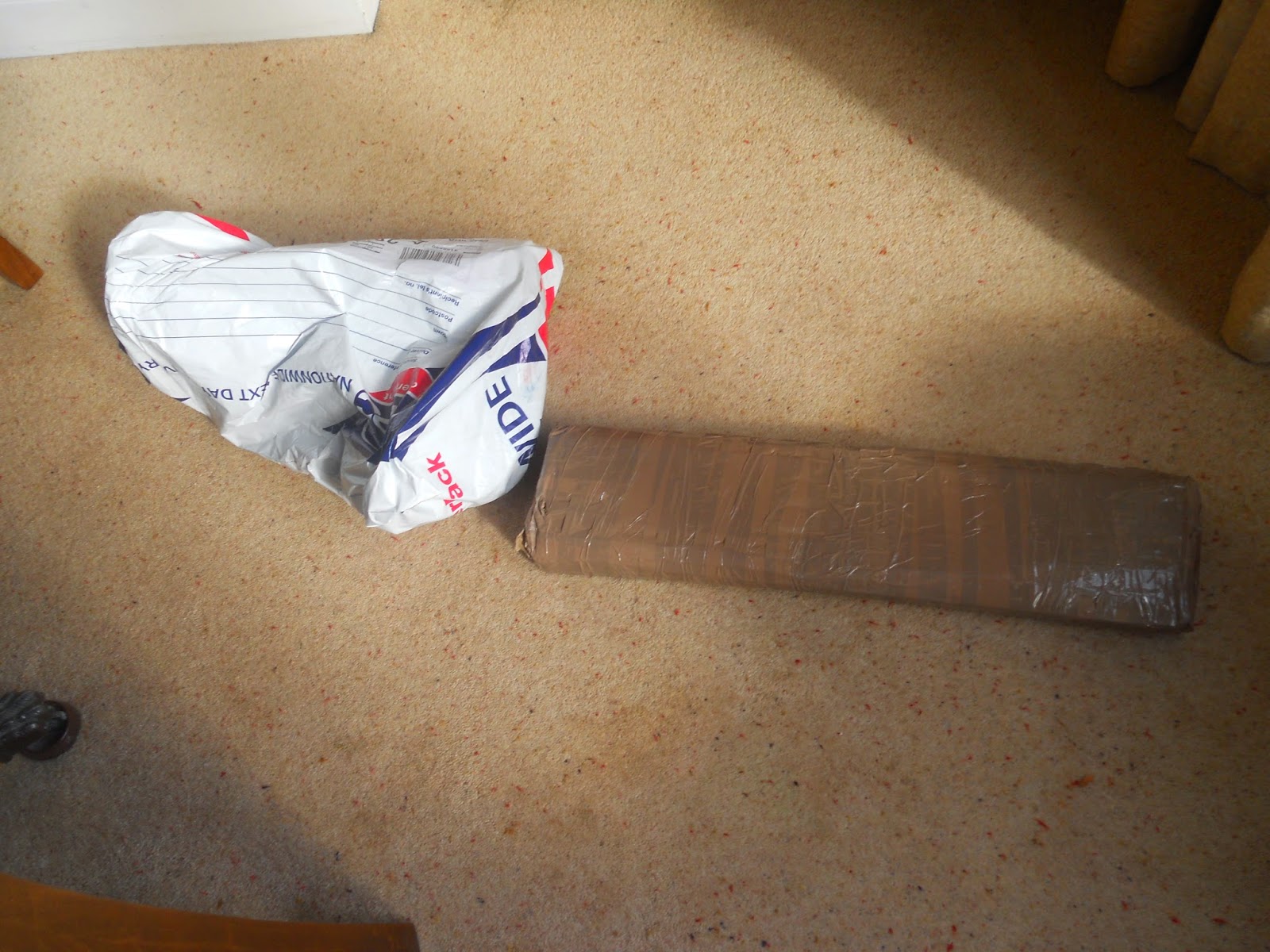 Hmm mysterious parcel of mystery. I wonder what it is. 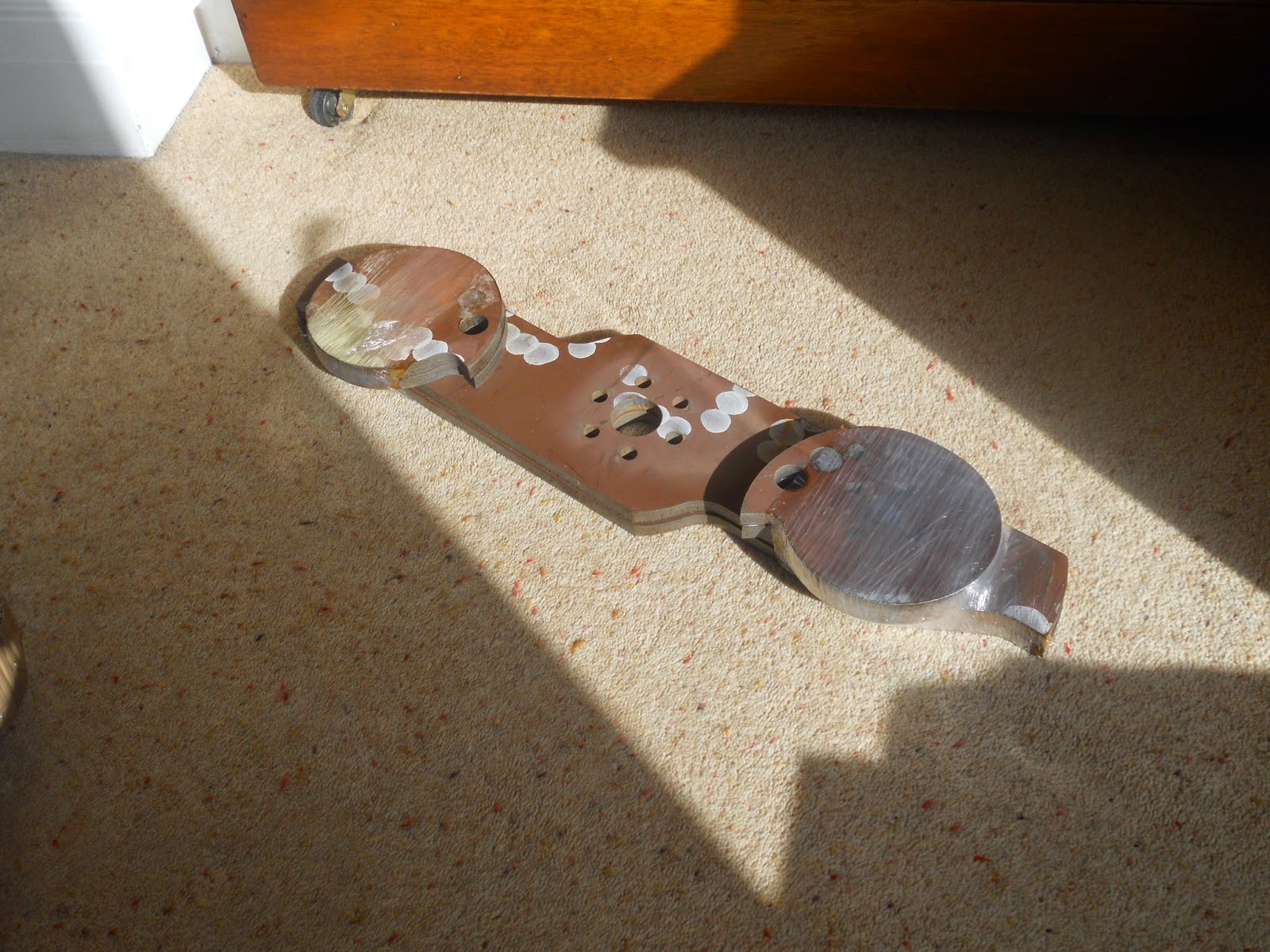 Roboparts! amaze! The waterjet place was hella quick. I got the parts next day and they were still wet when I unpacked them. Here are some bars for Mass and some discs for another cooler featherweight.

"Hang on" you may be thinking, "Since when did suddenly watercut hardox, I thought titanium was happening"

Not enough hours in the day for the ti bar right now. I had to come clean with myself and my timeframe and ability that it wasn't going to happen properly. Give me 2 months and it would happen, give me 3 weeks? Fuck that noise.

However, designing a flat single piece bar that wasn't dreadful strength wise and pug ugly looks wise proved too much for me in the late night clusterfuck session in which the bar changes happened.

Thankfully Ellis stepped in with his wonderful design and mad engineering skills. Billybob came up with the shape inspired by the fantastic Secto and Torgr 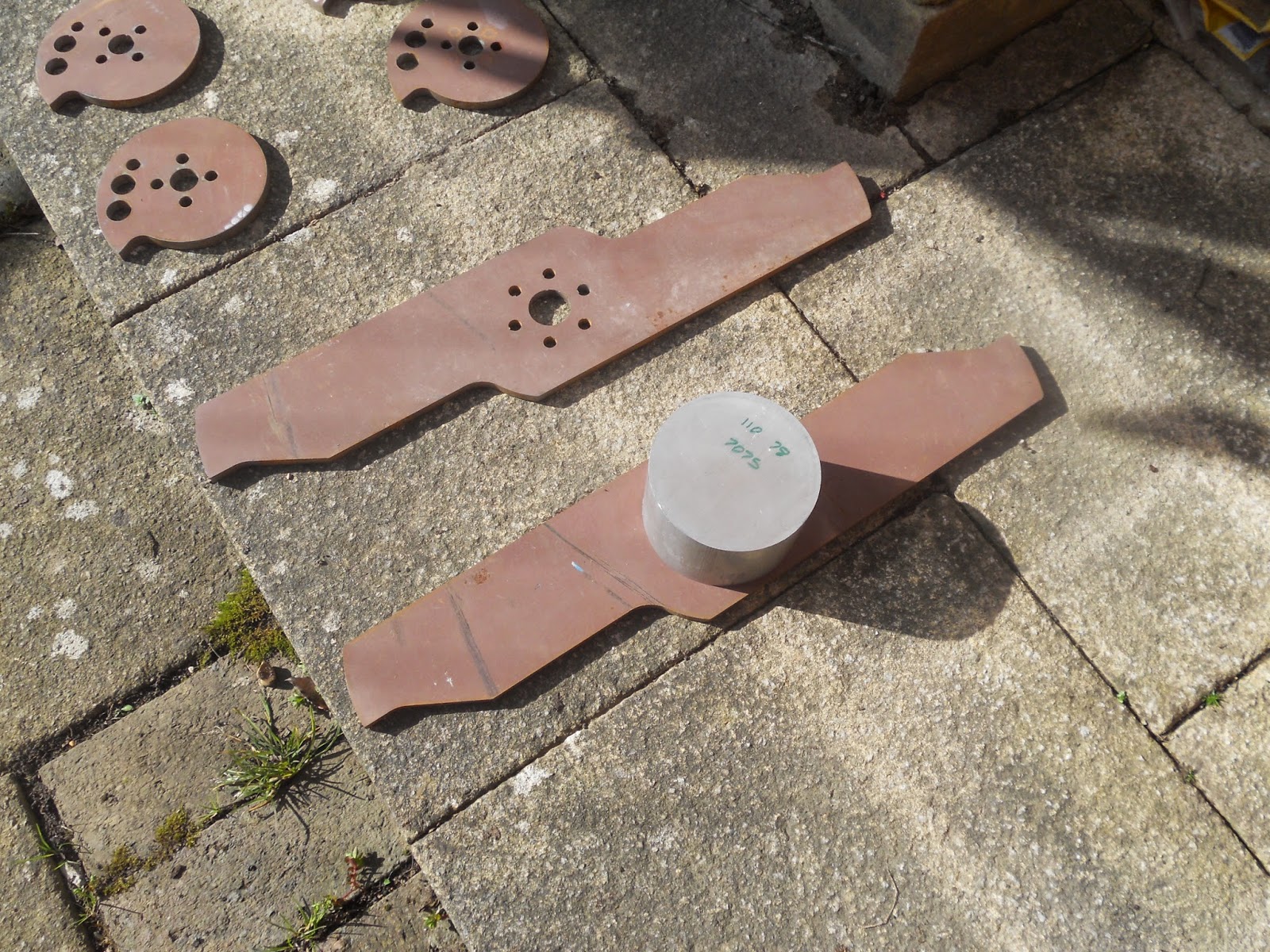 Here you can see the 7075 lump I have to turn into a pulley. It will be fairly dificult as it will have to have 2 bearing fits. One 32mm bore for the needle roller and one 80mm dia outer section for the SuperBearing. 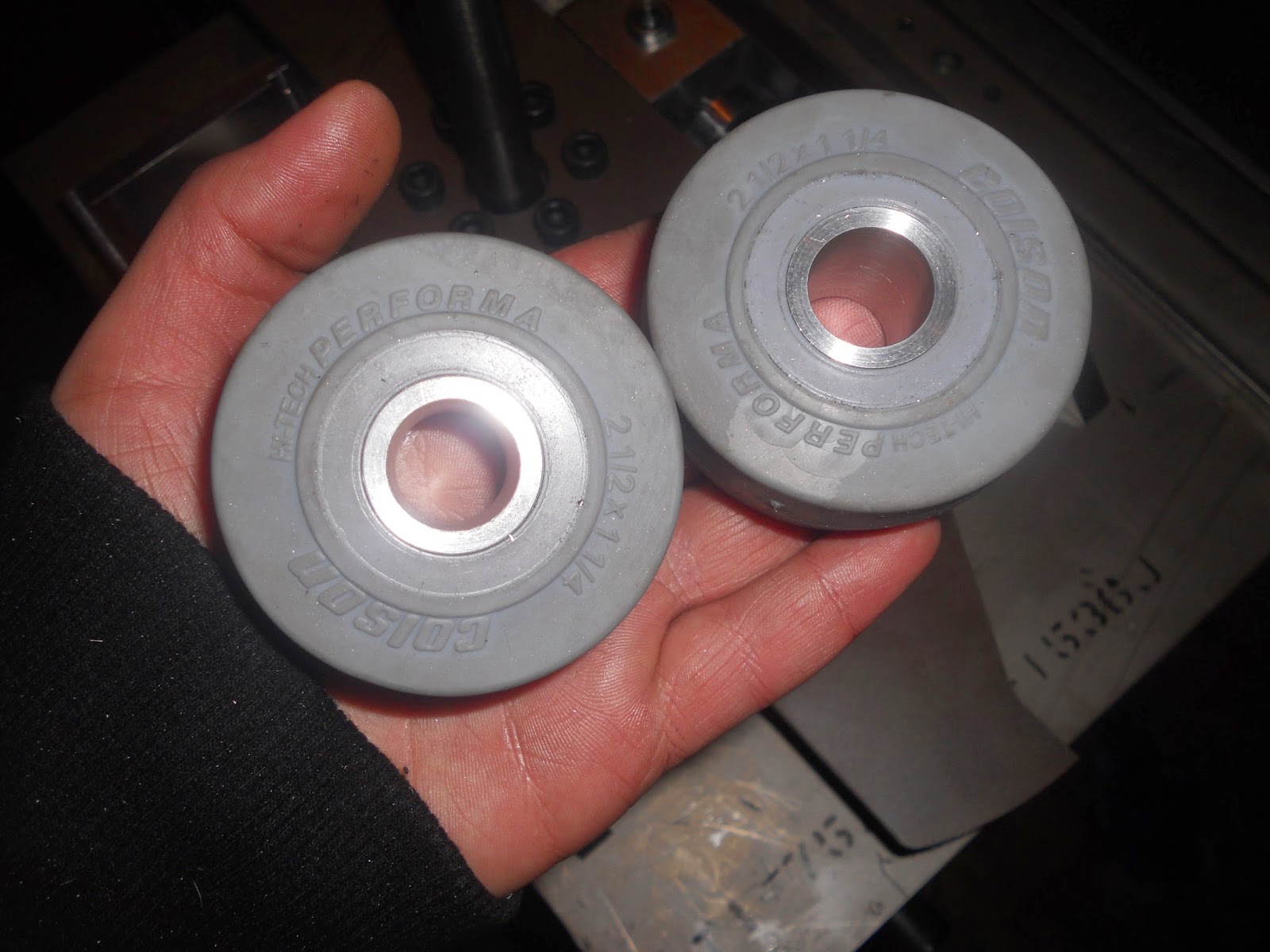 7075 hubs pressed into the colsons. I made them a hella pressfit but still might have to retain them with a grubscrew or something. A knurled OD would be really good. Maybes next time. 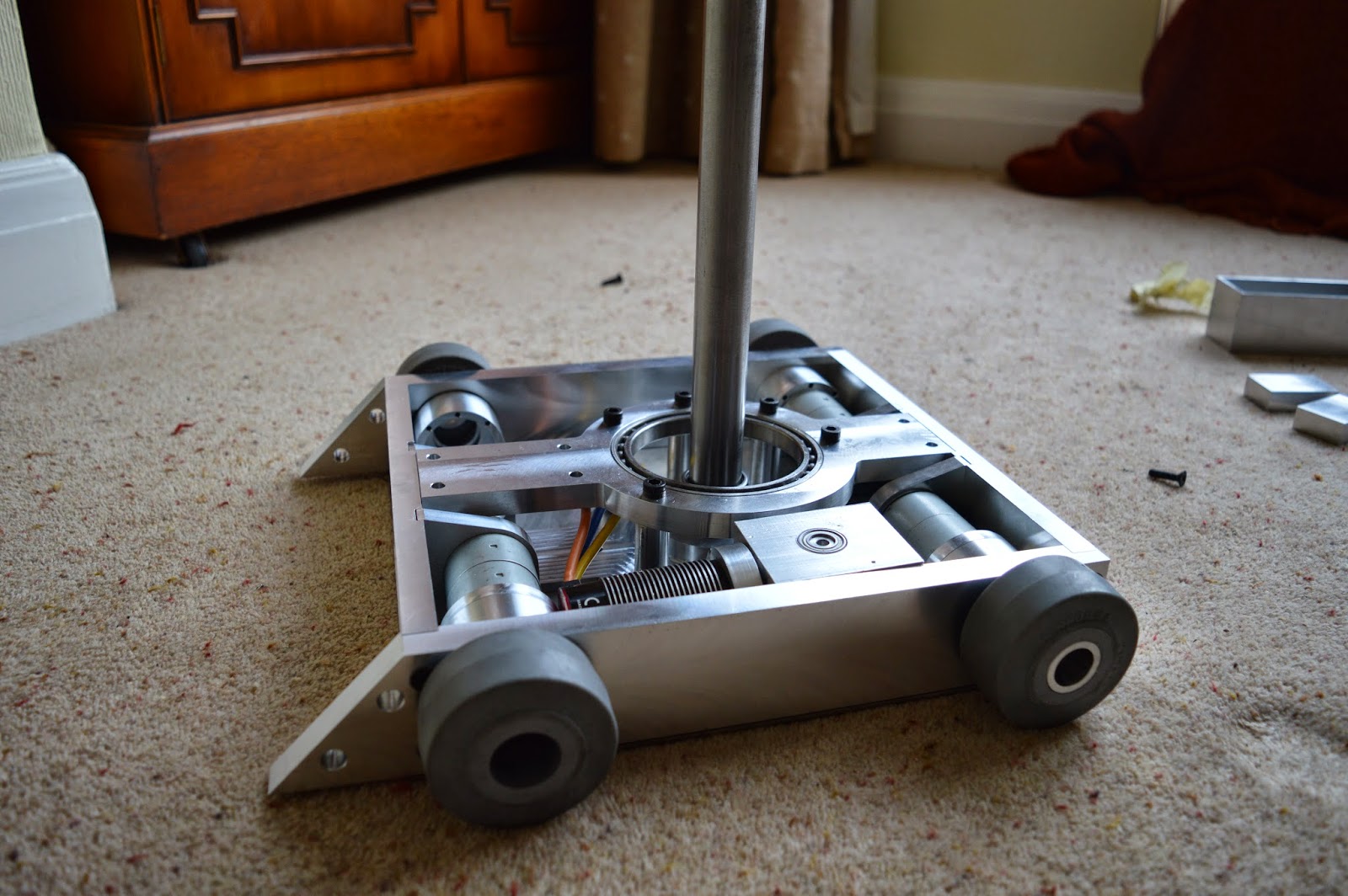 Whoa there Bessy, that jumped to a more complete robot!

A parcel of lovely things awaited me after I finished work, my CNC milled gearbox housings and my lasercut baseplate + lid 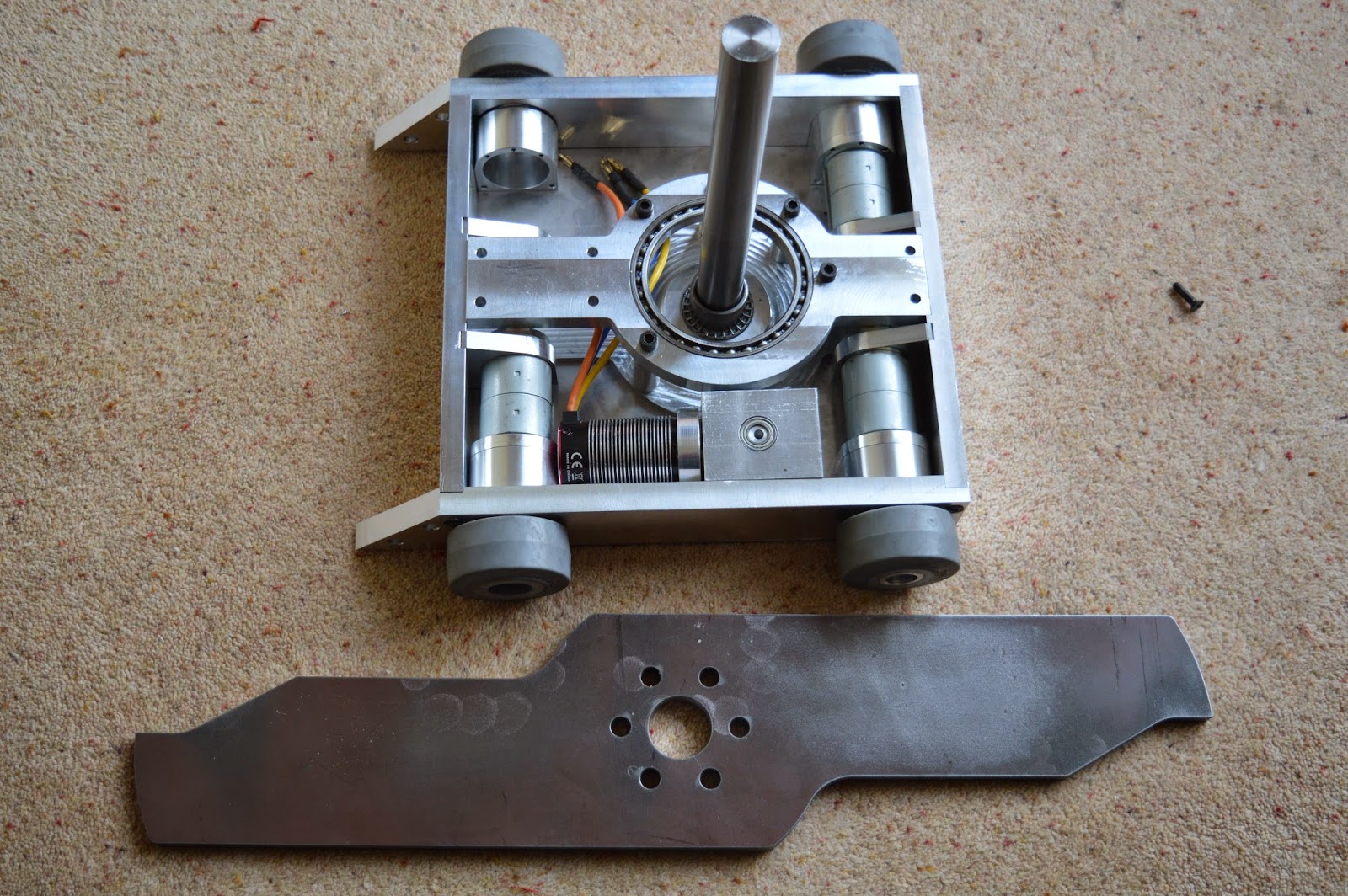 It's so damn shiney! Shot with semi cleaned up bar for scale! 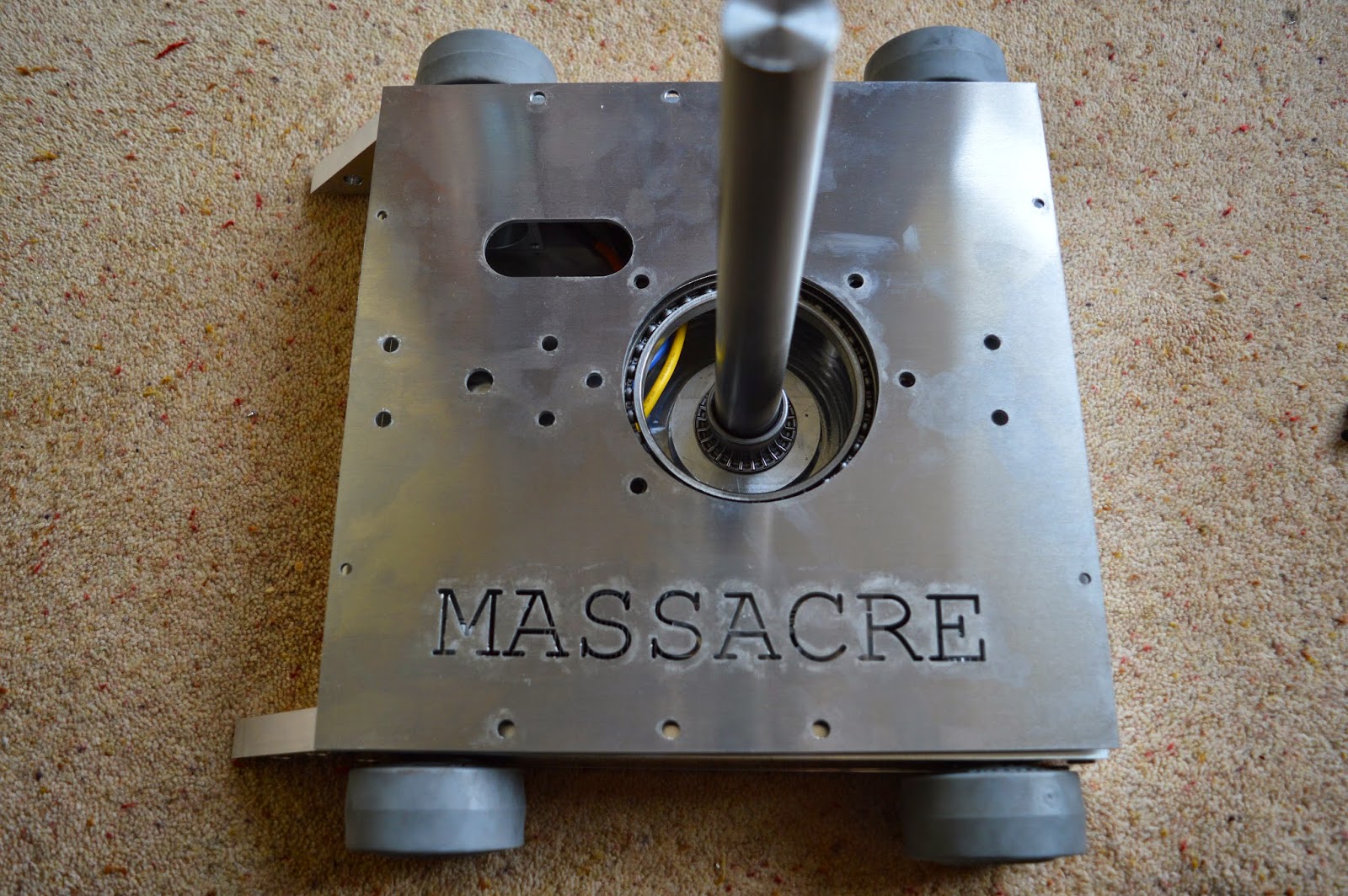 Don't judge me. I know it's cliche but damnit I think it looks cool. 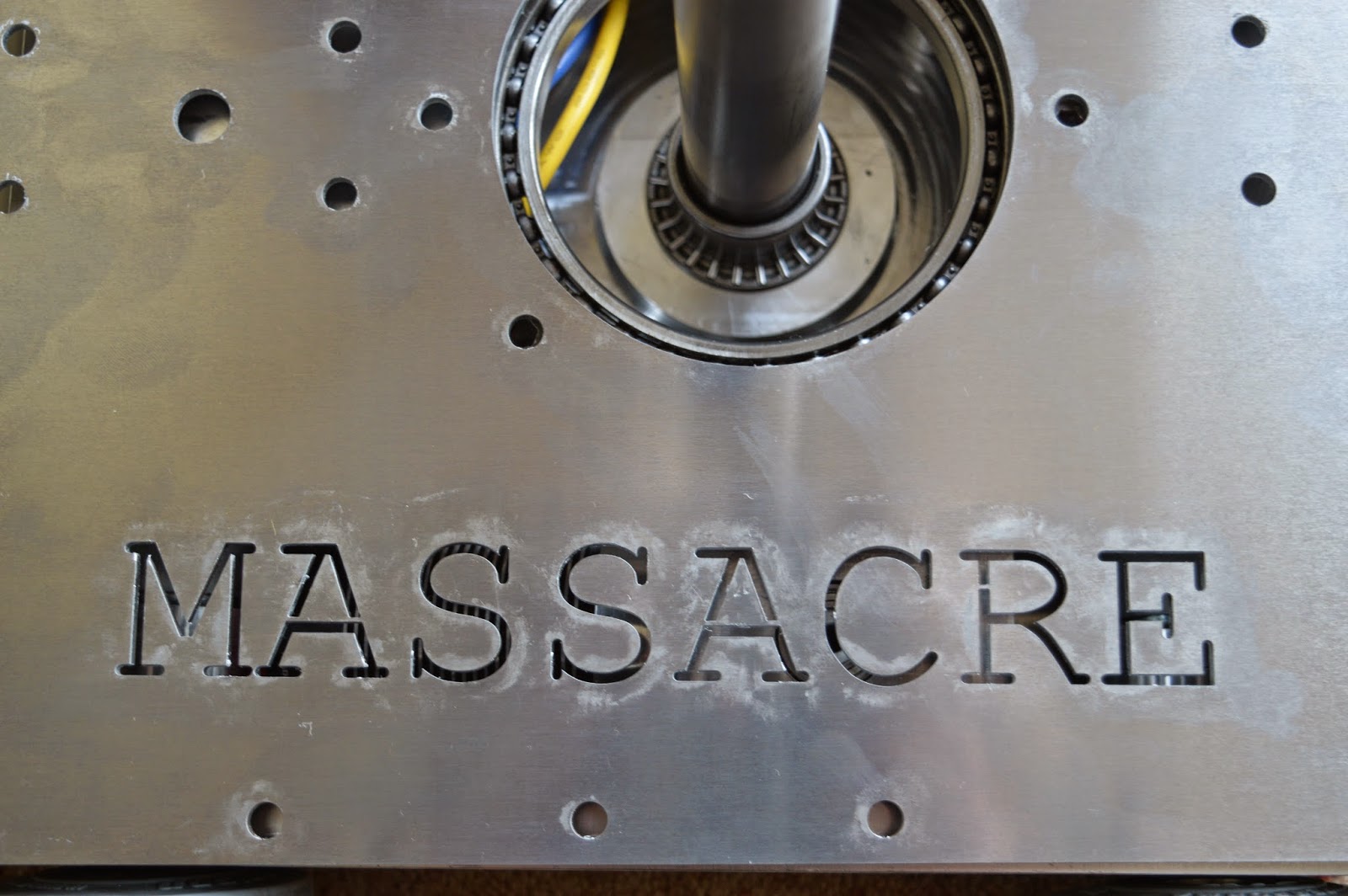 I'm ever so slightly flexing with the lid cutting. 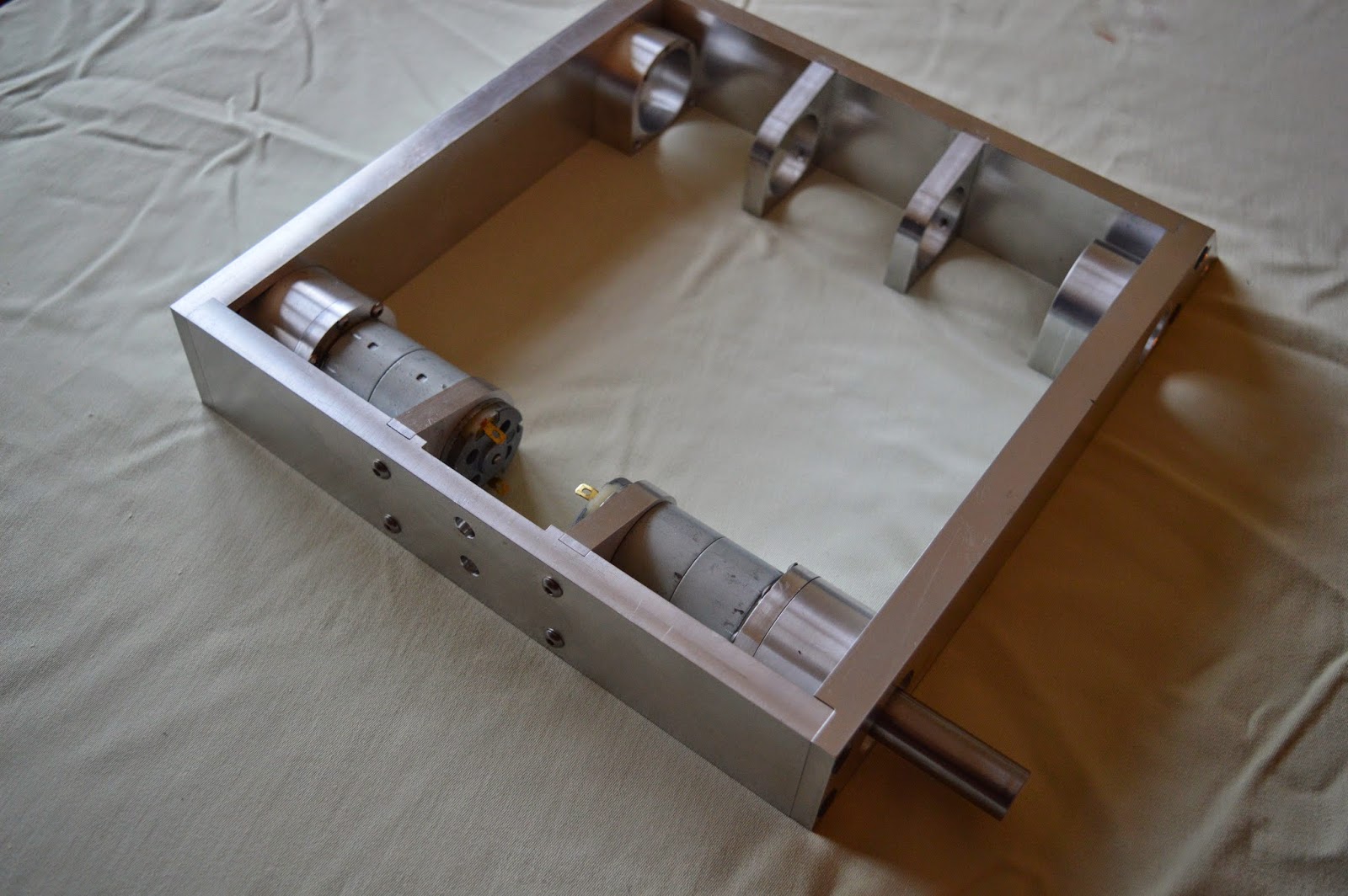 Got one gearbox made, got the internals sorted and machined the output shaft, It isn't keyed yet because I'm lacking a 3mm endmill right now.

That is more or less up to date with Massacre at the moment. I'll try and update sooner with more interesting things such as my draw and opponents for the champs etc and hopefully some more complete robots and maybe even spin ups...