Shane had very kindly got the Slaughterhouse arena set up at the RobotsLive event in Deeside on the 22nd and 23rd of September, so after a long wait we all finally got to have a bit of a bash about with our new machines!
Here you can see the temporary arena, its pretty far away from being finished, but its still looking pretty fucking cool. Lots of the features such as the sign and the scoreboards are not there yet, but its a lot better than nothing, and anyway the plan for this event was to see what works and what doesn't and boy, did I learn a lot about what not to do... 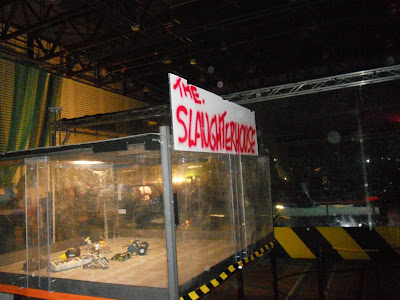 There was a very solid turn out, and a very good selection of beetles. There was the uber-axe of Dave Weston's "Headbanger"  and the solid, reliable lifter of Jamie McHarg's "Flatulence" with the brilliantly engineered RPM, 180 and cobra(?). Also there was my Eggbeater (details of fail coming shortly) and Gonzales made by some guy called Elivs or something idk, he came and ate all my bacon for a few days and I did all his wiring cos I'm a nice person like that. It was a pretty rubbish robot, with the weakest drive possible at this level... no wait.. the opposite of that; it used a featherweight drive system and was pretty much unstoppable provided it didn't cook its own guts.


Oh Eggbeater. Well to start off on a positive note, the weapon was pretty fearsome - not that it actually did any damage mind you but the thought was there and its heart was in the right place  Now for the bad stuff; the battery was so underpowered it wasn't even funny. I couldn't have the drive and the weapon going at the same time, which is kinda important. By the time I realised this and tried to cut the weapon to give me a chance of actually doing something in the fight I found 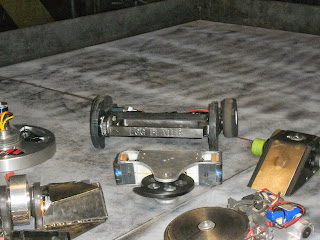 I only had one side going, and that was going very weakly. upon later inspection it turned out I had burned out a drive motor and esc... without fucking driving. Yaaaay. well done clever monkey, no cake for you.

And now for videos! 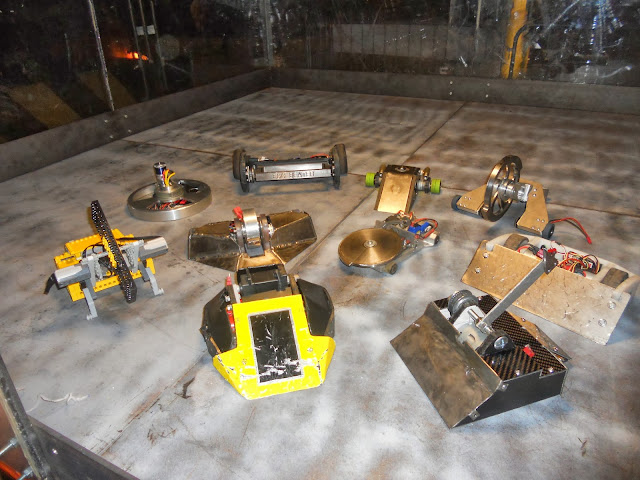