Help! I changed all my everything!

Okay okay, not all of my everything but a lot of shit has gone down with Massacre. First off I quit lying to myself about building the beetleweight version as a prototype, since it requires the same processes and thickness of material I'm just going to get the frames cut at the same time; this saves money and time and the environment! Robuts will still be built but kinda at the same time, so I can take a break from one and go work on its big brother/little sister which should prevent me from being driven permanently and irreversibly insane. Always a plus when that happens.

The point of overhead bar spinners is to, as the name suggests, have the weapon bar ontop of the robot. This means that unless the robot is designed to be superawesomesexyuber low, the weapon is quite high up. The obvious way to get a low height weapon system is to use a right angle bevel or mitre gear setup. This is what version 1 of Massacre had. It did not go well, in fact it was rather the opposite of that. Soured by right angled gearboxes, I designed just a flat motor and pulley into massacre. Needless to say there was a problem with this, nearly all the brushless motors I could find were either the right height but not nearly powerful enough, powerful enough but too long or ran at a ridiculously high voltage, like 10 or 12 lipo cells when I'm only running 5. They all seemed to have very low KV numbers as well. If you have read the previous Massacre buggery related posts, then you will know I sang the praises of two different motors. These, along with a combination of other things put the weapon height quite high, like several miles too high to be useful or it any of the anything. Arse.

My good friend Morris was going on at me about the fact that my design was a little bit very stupid there were some easily fixable flaws that should probably get some attention. First up on the "things to fuck about with" list was the wheels. 73mm wheels were too mainstream were what a lot of the low low pushy bots used, and if I wanted to use them too, it would mean that my blade would always be higher than their wheels. BAD THING #1. 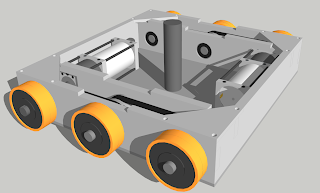 After a bit of back and forth I decided I was okay with dropping down to 60mm wheels. Now, as you know the smaller the wheel the slower the speed. Massacre was set to be a fairly slow robot by current standards, but my driving ability is similar to that of a small caffeine fuelled monkey with ADD. Who is on fire. And is dead. Slow is good, means I can actually get the robot going in a way that resembles controlled motion if you've never seen it before and don't know what words mean. But the small wheels cut the speed down too much so that almost everything could out-drive/box rush me. BAD THING #2

Ellis poked at me to go for different gearboxes/motors, everything from baneboobs to custom mega solutions. I think he was convinced the Magnum 775's were filled with wasps and all the evils of the world. I held steady though, and eventually (like 2 bloody days ffs) we made progress. I could swap out the motors from the Magnums ones which where 14.4v ones which I was overvolting to 18.5v to some 18v 775 motors that had a higher speed. This would increase the speed back up to where it was due to fastness but also increase the reliability as I would be running them basically at their intended voltage. GOOD THING #1

This had cut a little bit out of the height, but no where near enough really. This resulted in another Ellis and Harry throw shit around and see what sticks late at night. I'm not sure how, but I was convinced into trying a right angled gearbox once more, so much searching happened again looking for a suitable motor. Many were looked at, and most of those had one little flaw that made them useless or maybe I just have unrealistic standards, I don't know. Eventually we started looking at "inrunner" brushless motors, which generally are very fast but don't have quite as much torque. They also don't have the rotating can of outrunners. I think Ellis threw up a motor that looked almost perfect, 2350kv (qualifies as fucking fast) and 5s and 2400w. The speed was insane, and I would need a massive reduction to get the bar spinning at a sensible speed that would actually engage, but those were doable. GOOD THING #2 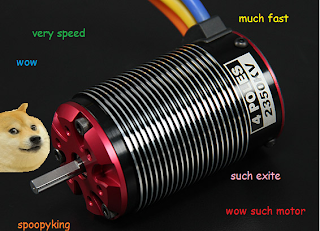 Now that I had the Wundermotor I needed to work out the gearing and *shudder* deal with the right angled gearbox. Now this is where Ellis came to the rescue again. Recently he has been moving out of the mudshack that was his old workshop (his words!) into his new building that I have named Fancyhut. Along with the swish new workspaceface he is shortly becoming the proud owner of a lathe. He may not have realised this, but I intend to abuse the fuck out of his new toy/mad skills. He, being better at general accuracy during building was a much better choice to attempt some fancy pseudo-engineering buggery that Massacre calls for. Indeed he has kindly dealt with most of the design of the gearing system, while all I did was sit around, play with numbers and listen to nightcore. I did name the thing though. The Ranglebox (so called because of its box-like nature and general rangleness) Looks so cool! Somebody give that guy a job. Seriously, he is such a bum he needs one. GOOD THING #3

Super awesome chocolaty fudge coated Ranglebox in place I noticed a problem. It would totally tit up the battery mountings. I wanted to run two separate packs, partly because that would make sure neither the drive nor the weapon was being starved of power, but also it would mean I could reuse a pack I already had, saving like 60 quid. But I couldn't do this any more due to lack of space because of unexpected Ranglebox. BAD THING #3

Luckily after not too much searching I found a single pack that would fit and would have more grunt than the two smaller packs, more expense but it was pretty bloody cool. It really is like somebody injected the old pack with steroids, then injected the steroids with steroids. It is capable of a theoretical 390a cont.... now all ratings taken with a pinch of salt yada yada, even if its like half of that I still should be fine. Awesome. GOOD THING #4 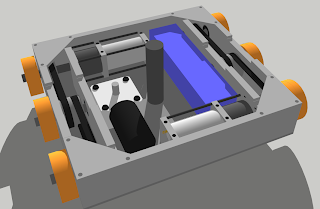 Oh, and possible cool feature for Massy, the motor is sensored, so I'm going to try and experiment with sensored weapons. Would lead to some very nice spin ups. Nobody else is really doing this as far as I can tell. It may be a good idea, it may not. Can't hurt to experiment and I can always run it sensorless if it doesn't go to plan.

Cheers for reading, if you did you must be pretty bored now. Now go outside and play. Also blame Ellis for the large amount of words. Bai. Haz.
Posted by Haz at 07:41