Even more Massacre for your money

As the title suggests, Massacre will feature quite prominently in the cluster-fuck of gibberish that will make up approximately 90% of this, but first I'll focus on the beetleweight front of things. 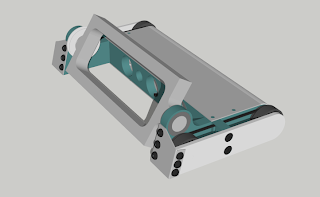 Eggbeater has had a rather large design change, rather influenced by the amazing Dominant Mode and other 4wd drumy and beatery things. This should really help the thing be drivable, as there is weight on the motors, and all the wheels, turning should be easier as it is about four miles wide. Can't really tell from any of the CAD's but O-rings are becoming more of a thing in my lighter designs. (totally not because a friend of mine has just bought a lathe and is capable of making me up pulleys for tuppence, no of course not.) The wheels I plan to use are 35mm ish which even with the 1000rpm motors won't make for a speedy robot, but hey. Big fuck-off beater. I don't need speed. These wheels will have a groove for the belt to slave the second wheel off of, and also space for O-ring tires. Not much grip, but they should be more rugged so they can better stand up to the steel floor of the Slaughterhouse and I don't have to replace them after .4 of a femtosecond. The frame of this is 10mm nylon, down from 12mm but I actually have proper armour in the form of 1 and 2 mm titanium and 5mm aluminium. Lots of this design is spinner fodder, but it looks too cool in my eyes, and it will make some great footage if it does get wrecked. 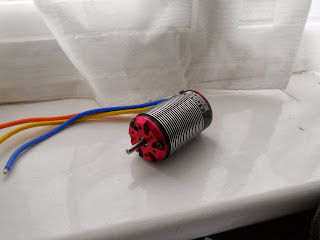 Swish looking beetles out the way, time for some Massacre related ramblings. Recently all of the everything was changed, prompting me to go for a different kind of weapon setup, to more definitely lock myself into a design and not get distracted again (its really too late in the game for massive design tweaks) To do this, I bit the bullet and ordered a motor from hobbyking, fully expecting a box that was just full of angry wasps and a note saying "haha you trusted us" (I've had two friends rather badly fucked over by HK) But no, it arrived quickly and the motor seems to be very nice indeed. I'm more than a little bit in love with it truth be told.  Once I had got over the initial OMGIGOTMYFRISTPARTFORTHISROBOTHOLDME. I took some photos of the motor, then I opened it up and had a shufti inside it. Well it would have been rude not to! It was fairly nice inside, no way of putting a full 8mm shaft in it, but no real worry there. I can use an adaptor or just have a 5mm shaft that steps up to 8mm at the end made up by some kind person. 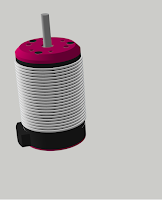 I then began the fun fun process of putting the motor into CAD. Took way to long, as I decided that late on a Friday night/early Saturday morning was perfect CADing time. In the end it got done, except for some of the detail on the front. all those angles and spacing and curves in Google ketchup? Fuck that royally. Having this cadded up instead of the black tube was nice cos I could plug it into the Ranglebox and be all posh and take pretty screenshots. Man I really need to find something better to do with my spare time.

Fancymotor in place I could deal with the base plate, or more actually the holes that need to go into it. Because the bulkheads and frame need to be pretty much perfect, I don't quite trust myself to fabricate the base and get the holes lined up (despite the fact that the baseplate was the best part of the last featherweight I built) Maybe if I had a bit more experience with metal work and didn't have work around the shed and annoying the neighbours with late night grinding/drilling. Instead I'm cheating. Will get the base plate water-cut from 4mm plate, I personally wanted stainless due to it being fairly cheap  and resistant to rust (my shed is like where rust comes on holiday, but then finds it likes the local area so much it buys a small property and invites its family and friends over to start a brand new life away from the hustle and bustle of the big rust cities) but general opinion was to go to hardox. I will be doing other parts as well, not just the base i.e. parts for the wedge and the wheel guards and probably a beetleweight disc if I feel that way inclined when I come to sending off for quotes. 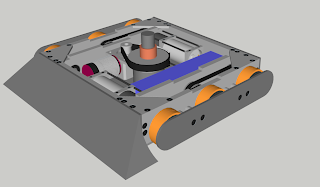 That somehow brings me onto another point. Wheel guards. *shudders* Now I don't know how why, but I don't seem to be capable of getting a robot to look good with enclosed wheels.
I like the look of the exposed wheels, its a hideous design flaw, but I almost can justify it purely from an aesthetics point of view. Almost. So wheel guards have to be a thing, trouble is its very hard to get them to not look like absolute total arse! The ones on the first Massacre were worse than the weapon if that's even possible. I might have cracked it this time, yeah it doesn't look great but there is nothing too ugly about it. It did show me Massacre can do a great impression of a tank. 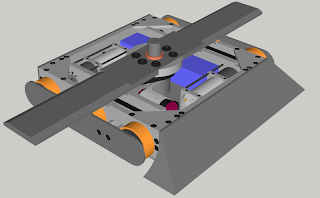 That little voice in my head called Elvis, (emphasis on the little) seemed intent on nagging Massacre into a better robot with suggestions, like "use a proper material for the base" "don't have the robot going 5mph" and "don't take out the drive motors to save weight for a battery to power the drive motors you tit" came up with another cracker. 8mm thick hardened steels are just too weak, 10mm is where it is apparently at, whatever it is. The bar has been made thicker and wider, and unsurprisingly heaver. Its now nesting somewhere around 3.5kg. Arse. That would make for a killer weapon, but not really anything else. I'm going to be fighting weight like a big weight fighty thing. I suppose there are lots of places to loose weight, but most of them require compromise.

Nothing really more to say, only really some pretty pictures. After a little bit of pissing around I was able to get my ketchup drawing of Massacre shoved rather haphazardly into AutoCAD which is pretty cool. Its not actually functional, but it's a pretty picture. 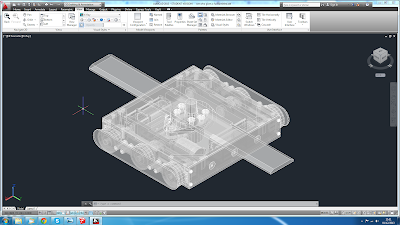 Also, have a slightly exploded version of Massacre, this is probably what will happen to it during its first fight. But lets hope not eh.

Cheers for reading. Hopefully before too long actual progress will happen.
Haz.
Posted by Haz at 08:47