Ok so Massacre has had even more CAD work on it, namely some corner pieces and more bracing to make it as rigid and tough as possible, and the wedge shape was changed to free up some space and more importantly weight. I was bit worried about how well it would all work, the belts and the waterjetting  because, well. It's all big and scary for a guy who normally just screws plastic together. I forget how I actually came to start designing the beetle (apologies if it was you who prompted it!) But I set out to make a Beetleweight Massacre, trying to keep the processes and build techniques the same just smaller. I've named it Little Miss Massacre for now, as the beetles should be an equal opportunity class, and I might win if she distracts the boys with her shiny spinning bar of death, destruction and something else that begins with d (dragons!)  Now for some specifications on the lady in question, her base plate is 145 x 165 (Massacre 280 x 330) Which is a pretty decent size for a beetle I think, nothing will be a squeeze yet there won't be the several cubic meters of empty space like in dear old Eggbeater.  Her frame is a mix of 10 and 5mm thick 7075 aluminium with 1.2mm titanium base plate and 1mm carbon fibre lid (possibly, maybe more titanium if have the weight. The wedge will be 2-3mm titanium scrap I have.  The frame is a jigsaw puzzle style, exactly like Massacre. She is running 1000rpm "ebay" motors at 3 cell lipo, possibly 4 cells as with small wheels this won't be very fast at all. My other beetle, Eggbeater has a very heavy, fairly slow (4000rpm) weapon with an incredible theoretical amount of power behind it. Little Miss Massacre will have a fairly light, only 3-400g or so of bar but spinning 6-8000rpm powered by a small 400watt brushless outrunner. 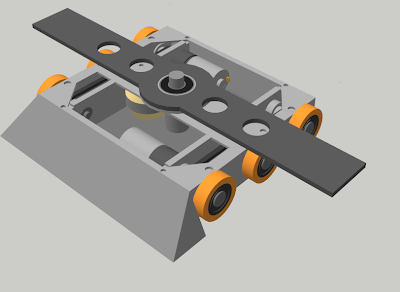 Here you can see Little Miss Massacre in relation to Massacre and the Eggbeater CAD the other froody robots are old versions of a rather cool thing that Elvis was planning at one stage. 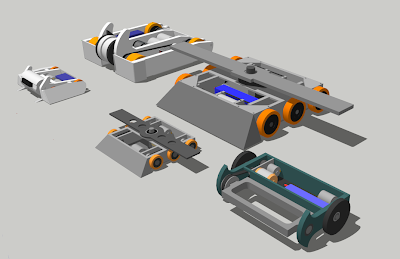 More on this when something actually happens...actually probably not, I'll probably post some more progressless progress before too long. Cheers anyway. Haz.
Posted by Haz at 15:52