With shouts of joy and whimpers of apprehension I dive back into the maddening world of Massacre. What follows is an overly self indulgent semi coherent ramble about everyone's favourite non-existent, orange-wheeled featherweight.
As Massacre is being designed to be a show off (if I freely admit it, its not as bad, right?) robot. Showing off meaning I can do slightly  more than haphazardly screw HDPE together and add cordless drill motors. I got confused and decided that this meant that this robot had a budget of three quarters of a million pounds. Now, the reality is I've got about £3.50. I'm not going to totally cheap out on all the components in order to cut costs but some things have to change. The motor that I had intended to power the bar is a rather powerful and highly regarded brand of motor; a Scorpion. The one I wanted costs about £130-140. While this is probably a good investment in a quality product, it's still 140 smegging quid, so that's nearly £300 alone on a motor and spare. So fuck that sideways I needed to find something that is a little more...dirt cheap. God bless Hobbyking, that's all I can say. http://www.hobbyking.com/hobbyking/store/uh_viewItem.asp?idProduct=30602 $42, that is about £26-27 pounds so even if (or rather when for a 30 quid motor) it breaks down/blows up/turns out to be filled with wasps I can easily have a spare. Yum. It's slightly longer than the other motor, but no worries there, I can still fit it in. 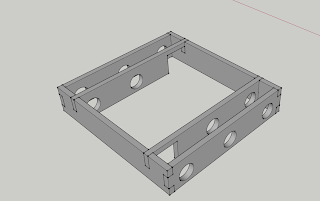 Now for some pretty pictures, I've drawn up the frame with its lovely slots and tabs and am just checking it fits together. The joys of emachineshop mean that I can print out the drawing of the part to size, and physically check sizes and whether or not things can fit in, in the real world. Bit time consuming but Massacre 1 taught me never to just assume things will work in the real world if they do in CAD. I'm a bit worried about the 10mm aluminium being too thin, but it *should* be fine. The grade it is should mean its stiff enough for a frame and that's really what matters with this. 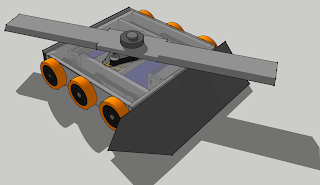 Well here is slightly more Massacre pretty pictures, I find I try to keep loo kin at and tweaking the design every now and then to make sure everything still fits, works or is a good idea. Changes on this version are a new bar, pretty large which I think it does need to be, in an ideal world I would like titanium as that would be light, not particularly hard, but lighter and fairly tough. For ease, chances are it will be hardox and not have any of them fancy edges on it...unless someone offers their milling skillz for peanuts. 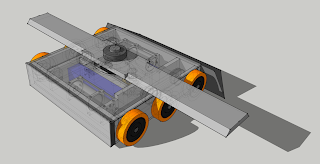 Also featuring on the super new chocolatey fudge coated Massacre is the rear armour. The arse plates are made up of sandwiched layers. This sandwiching of the arse plates (oo er vicar) should reduce the shock of any impacts going through the frame and buggering up alignments and things. Its a 10mm HDPE (soft plastic) plate with a 3mm bit of titanium I have pare over the top of this. Some rubber may end up being added to the mix along with mayonnaise and tomato just to make it a proper sandwich if I ever pluck up the courage to sift through the search results for "rubber sheet". Something tells me robotics might not be the first thing that turns up...

This is just me mucking about, I call this picture "when I grow up I want to be Hazard" or "They said I could be anything, so I became Brutality" 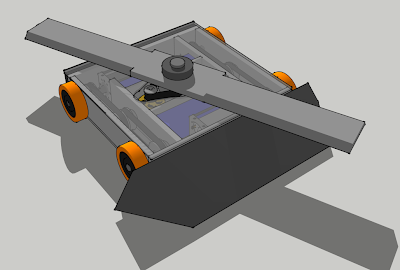 Thanks for reading, if you read this. Mind you, if you made it this far then  you are either insane, me or a hyper sentient gerbil sent back to the past to escape a nightmarish future or D: all of the above. Cheers!
Posted by Haz at 14:25