Stupid title is stupid. Anyway, last Saturday was the AWS and in no break with tradition I did not do particuarly well, but I massively enjoyed myself and that's what counts. I had the wonderful Joey McConnell for company over the weekend, he came down Friday and with his rather wonderful, if a bit lacking in the side department, robots. With such beasts as Arcus and The Hurting he had a quite formidable team. I had taken a rather pretentious way of naming my robots for this event, all of my robots were songs on the rather wonderful Sad Sappy Sucker by Modest Mouse. My team is shown to the side.

It was a mixed event, most of my robots having their first fight in the first round.. I think I lost all but one meant I went out of the competition pretty quickly. The standard of antweights is still rising, there were so many really quite good robots and I was pretty much totally outclassed. It didn't help that the controls were almost totally reversed on the robot that actually needed control.  I was able to pick up a much needed battery upgrade for the beetleweights, so soon Eggbeater will be running much better. 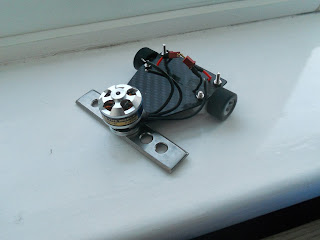 Well after the competition I know that I need to, as ever, practice my driving and if I'm going for a spinning weapon it needs to be rather good in order to keep up. Horizontal bars I think do have a very good chance with the competition the way it is at the moment. A powerful bar should blow the opposition away with a good enough hit. Running with this thought I watched a few videos of similar style robots and set about constructing something, just quickly and on the fly. It turned out surprisingly well. Insanely good maker/builder/techno wizard; Jim "the human cnc" Blunden  had kindly donated some parts of his old robots, namely the shell of Barbarian his old undercutter. This had a very nice carbon fibre chassis which has been press ganged into service one again. The bar I'm using is hand made by Jim and is fantastic...somebody give that guy a medal or something! I'm direct driving the bar using a quite large outrunner brushless motor. It spins nicely and should hit quite hard! The drive is 50:1 polou gearmotors and the wheels are 21mm dia Slot car ones (really soft and grippy)

Not really much more I can say really, there will be a fairly meaty Massacre/beetleweight update/ramble soon though. Cheers, Haz.