Being more than a little bummed out with college and trying to figure out what direction to take with my life (can someone pay me to build things for them??) I needed to do something I enjoyed lest I go mad and murder everyone with scientific calculator.

Some parts of Massacre are very designed, while other bits aren't. I purposely did this to allow for reality to kick in as what works in my CAD and in my head may not be transferred to the real world. Designing on the fly always seems to pan out better than relying theoretical stuff. For me anyway. One of these parts was the Rangleboxen, which is angle grinder gears shoved into a prettier case a right angled gearbox for the weapon. Because running 2.4Kw through shady £4 Chinese gears is a good idea right? Now for my next trick I shall attempt to turn this pile of components into a fully functioning gearbox for a remote controlled death machine. (AA batteries not included) 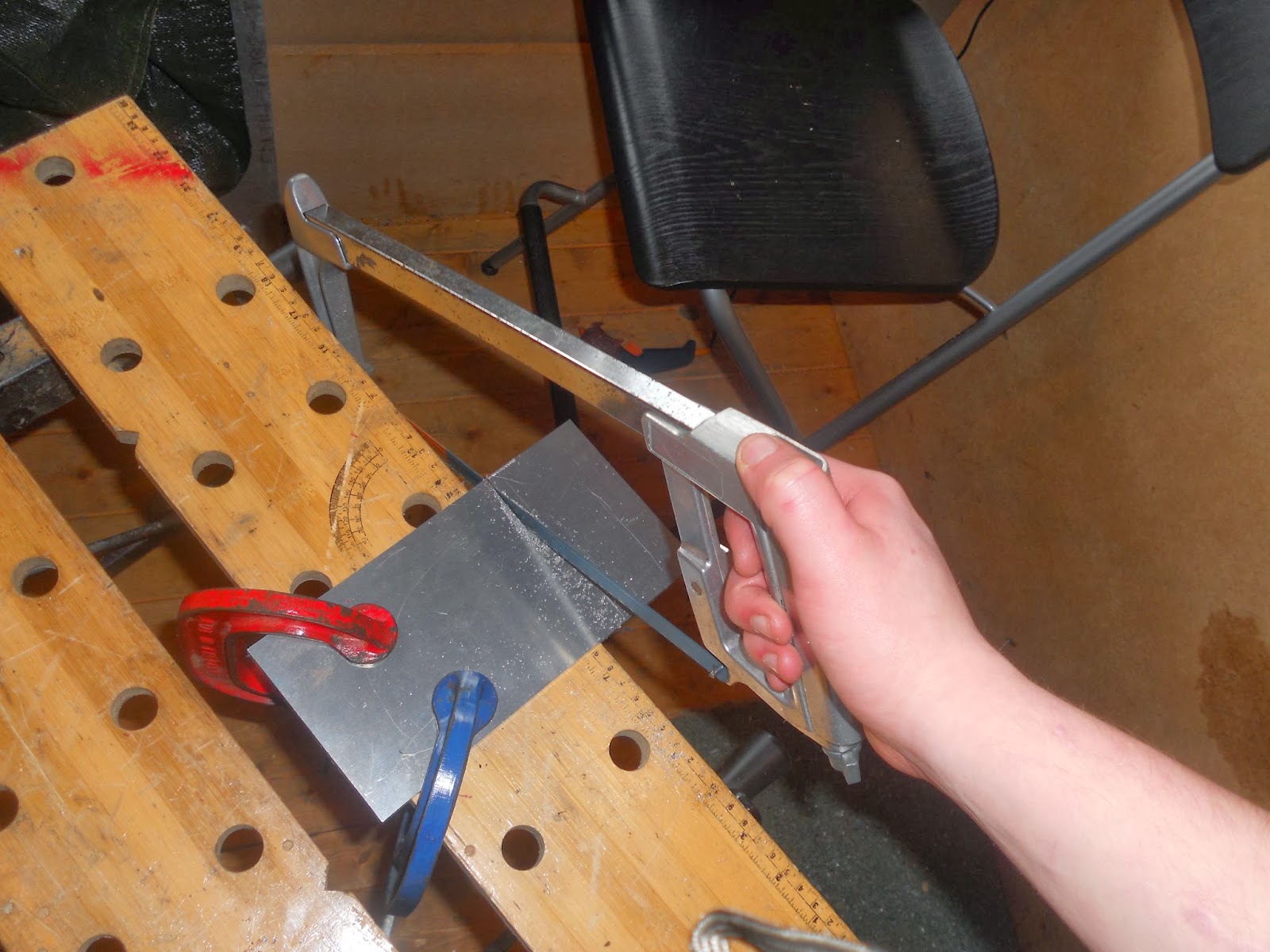 Chopping up some 10mm 6082 aluminum with a hacksaw because I am too poor for a bandsaw hardcore like that. 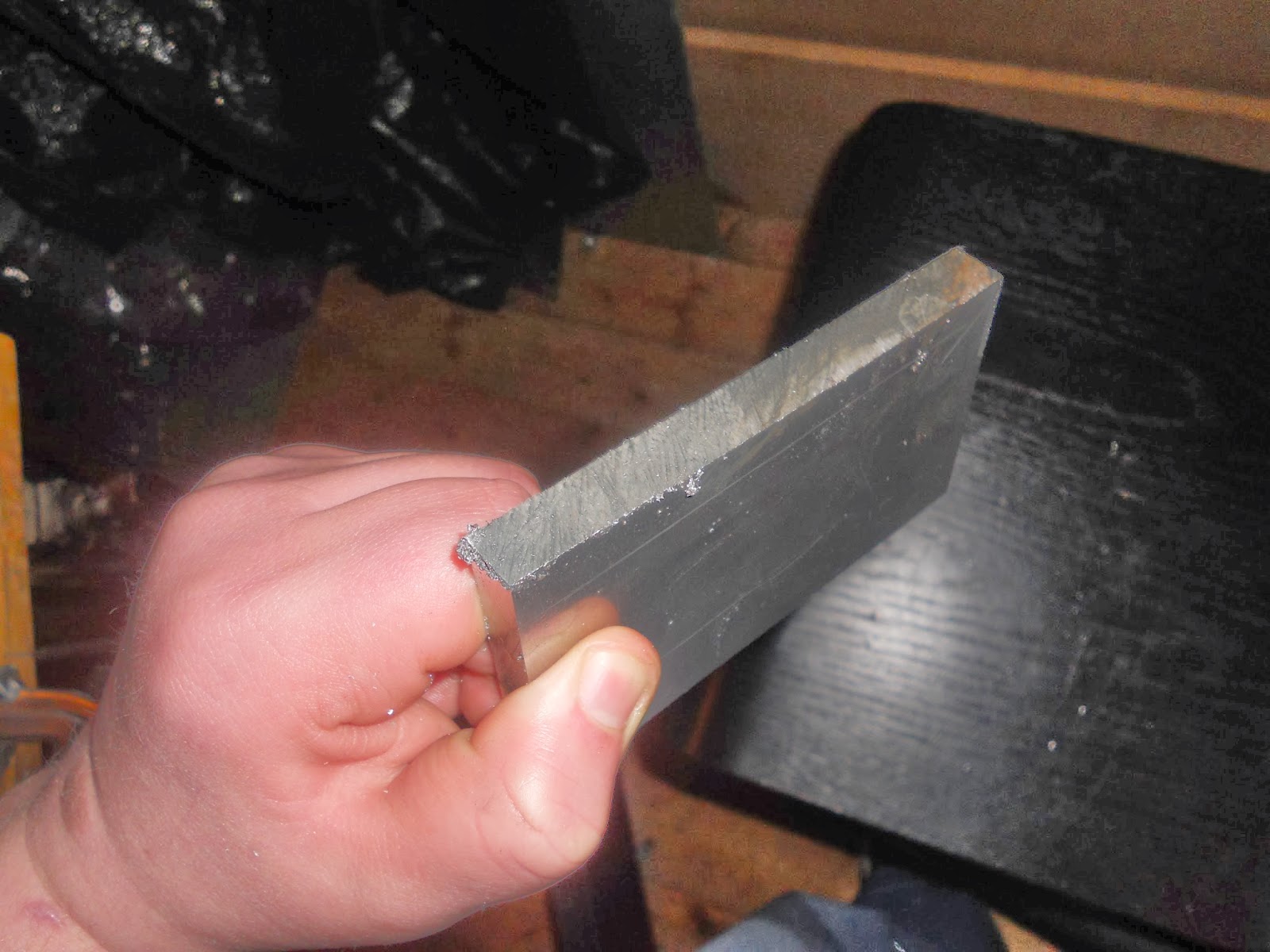 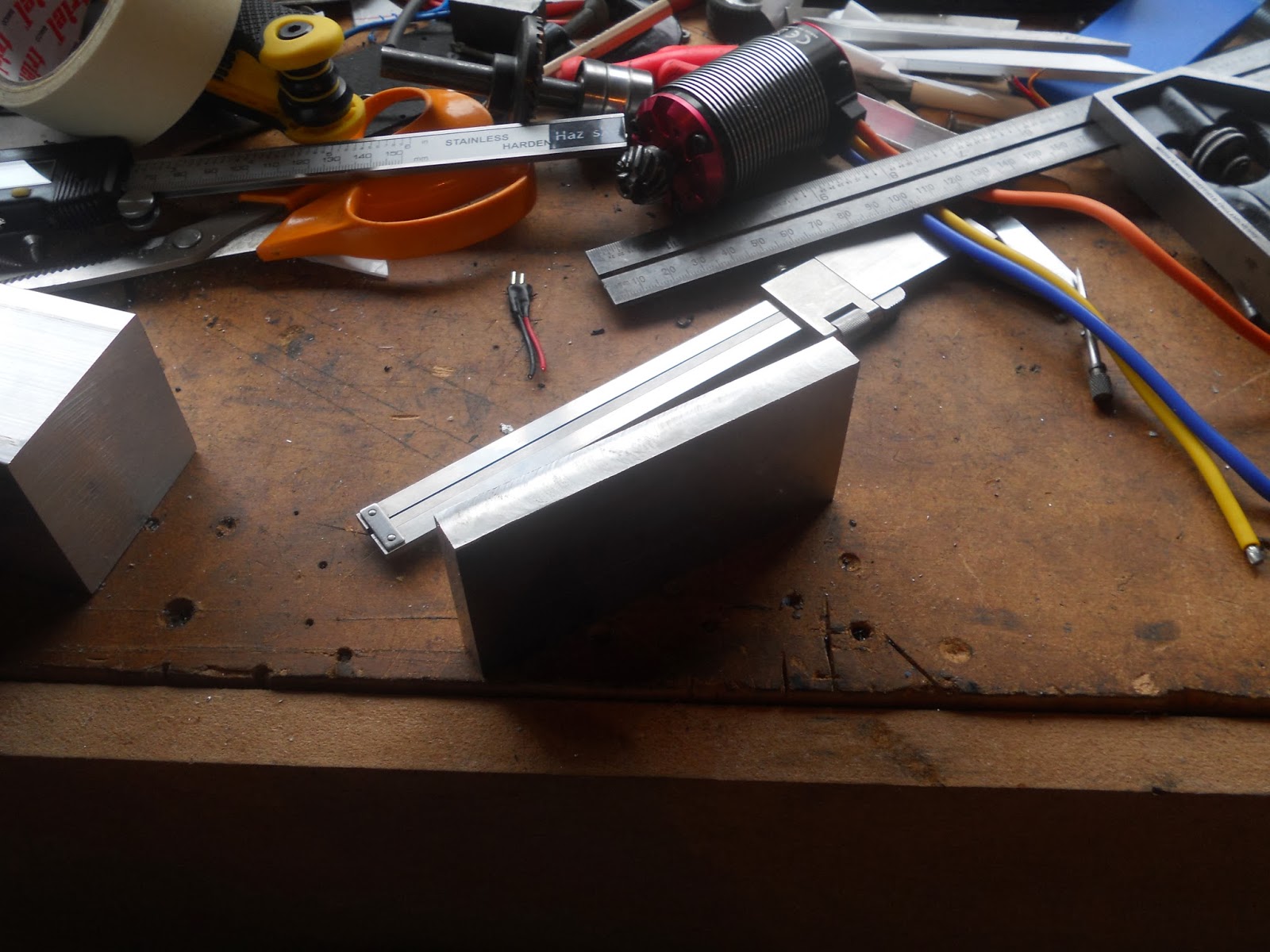 That's better. Skimmed it down to 50mm high, its 100mm long here; I then shortened it down to 60mm long. Also featuring is wundermotter and an array of measuring tools 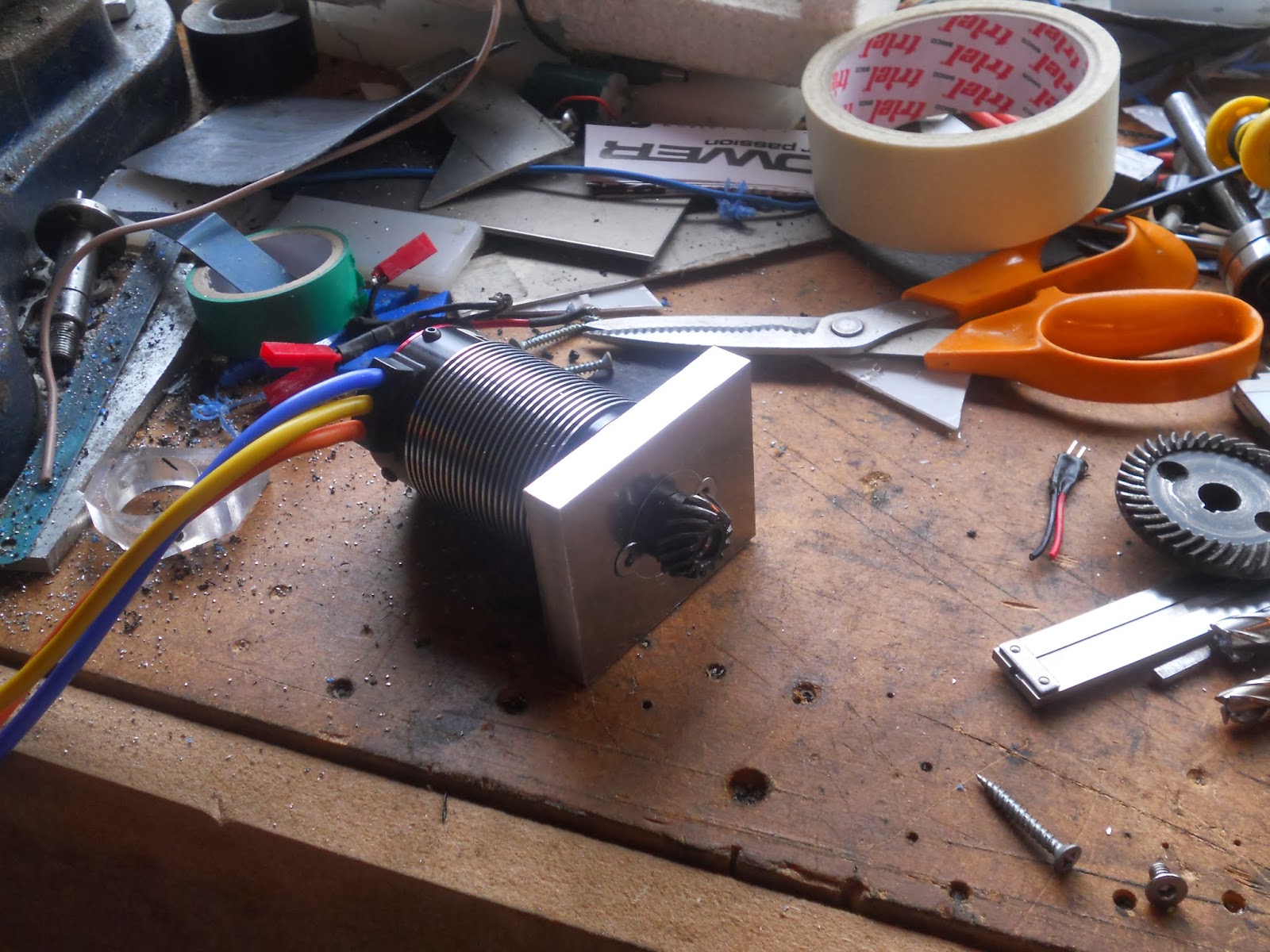 After the digital calliper was press ganged into service as a ghetto lay out tool and a screw as a centre punch (wow such precision, much engineering) I had super legit markings and could go and bore the holes on the milling machine. WTF is up with brushless motors though. They all boast eleventy bajillion watts and infinite torque but then come with M3 mounting holes. Using M4 atm and may step up to M5 for more hardcoreness. 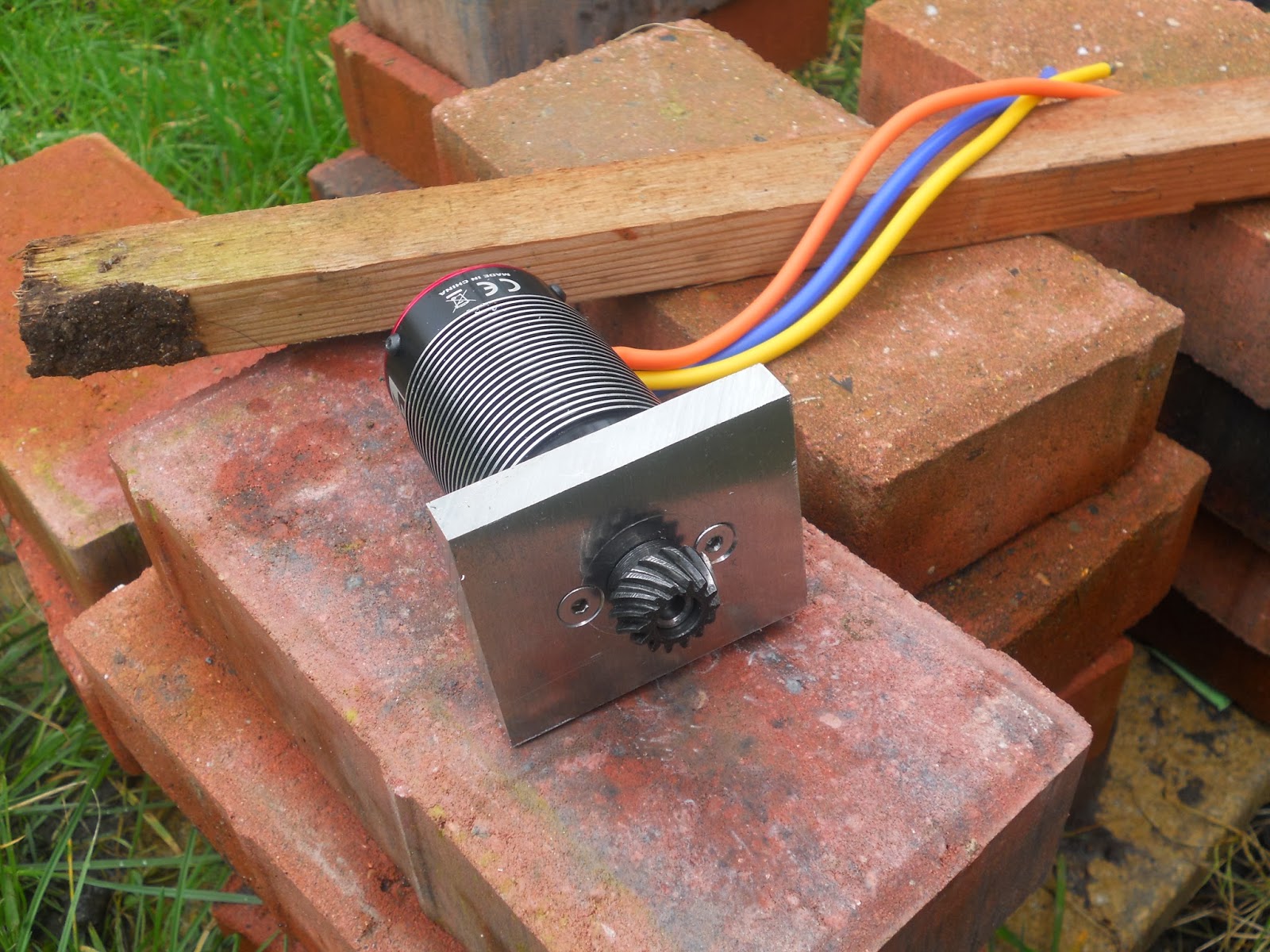 Vanity pic outside where the light was better. It wasn't raining for once but everything was sill a bit damp and very muddy. Trying to match up to my buddy Ellis with the legitness of our motor mounts. His is 5mm aluminium and nice and curvy with 12.9 high tensile M3 for added poshness whereas mine is a big bastard at 10mm thick legit aluminium with M4  bolts. Only stainless so I loose points there. I will be doing more work to my mount, M6 mounting holes and will try and put a pocket in so I can sit the motor further into the mount for strength. 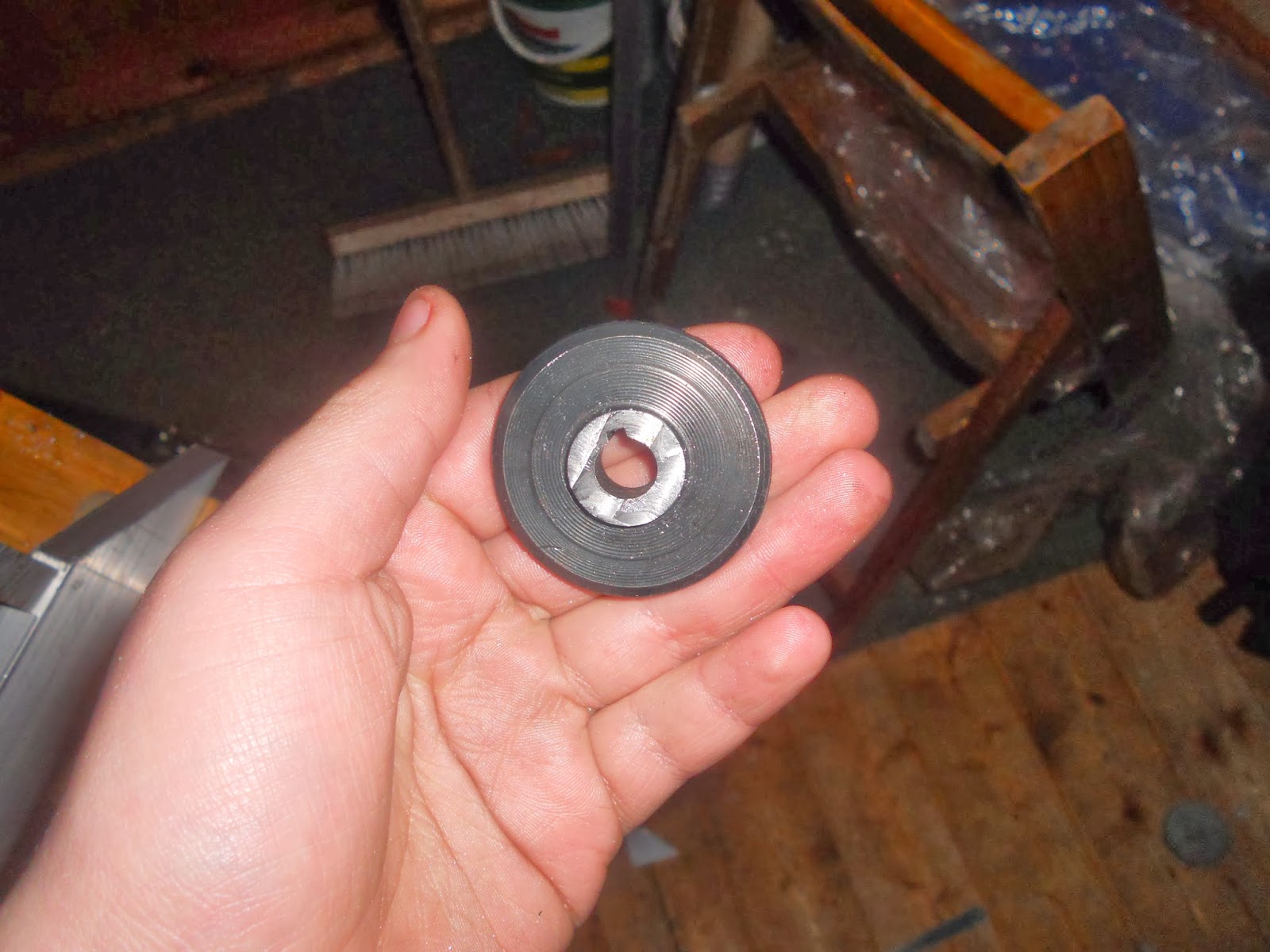 Ghetto machining time. The boss on the ranglegear was being a right pain in the arse. Some silly non standard diameter OD so I couldn't fit a bearing over it. It was also too long and would have sat the entire Rangle assembly up too high which would have put the blade height up. Unacceptable in a silly low overhead bot.  A simple solution would have been to turn the OD down to say 17mm and stick a bearing around that. Super low profile. But to do that I would have needed a lathe and Ellis was too pussy sensible to want to do mystery hardish steels with a machine that isn't totally rigid. So my other option was to lop a couple mm off the bottom of the boss on the mill. It's shit like this why I'll never be an engineer. 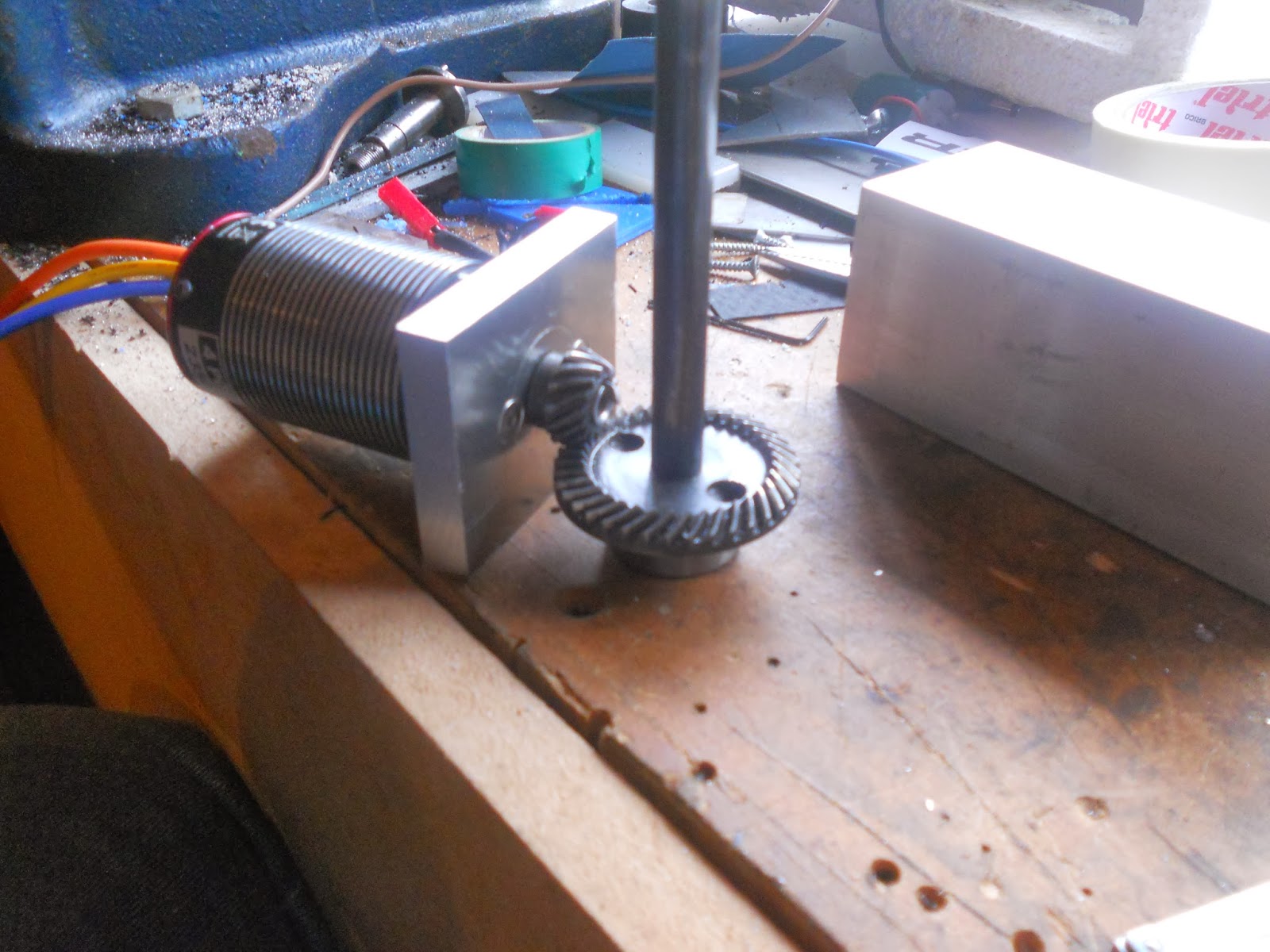 Crap photo but you get the idea. How are you gonna make the bearing pockets without a boring head Harry, they are kinda important? Well person who is not me, the sensible thing to do would indeed be to buy a boring head and use the right tool for the right job. But that is quite expensive (promise I'll buy proper things soon) My plan is to beast out most of the material with a big fuck off drillbit, then ream the hole to 26mm. <£20 solution and it should sort of work. A bit. Maybe. 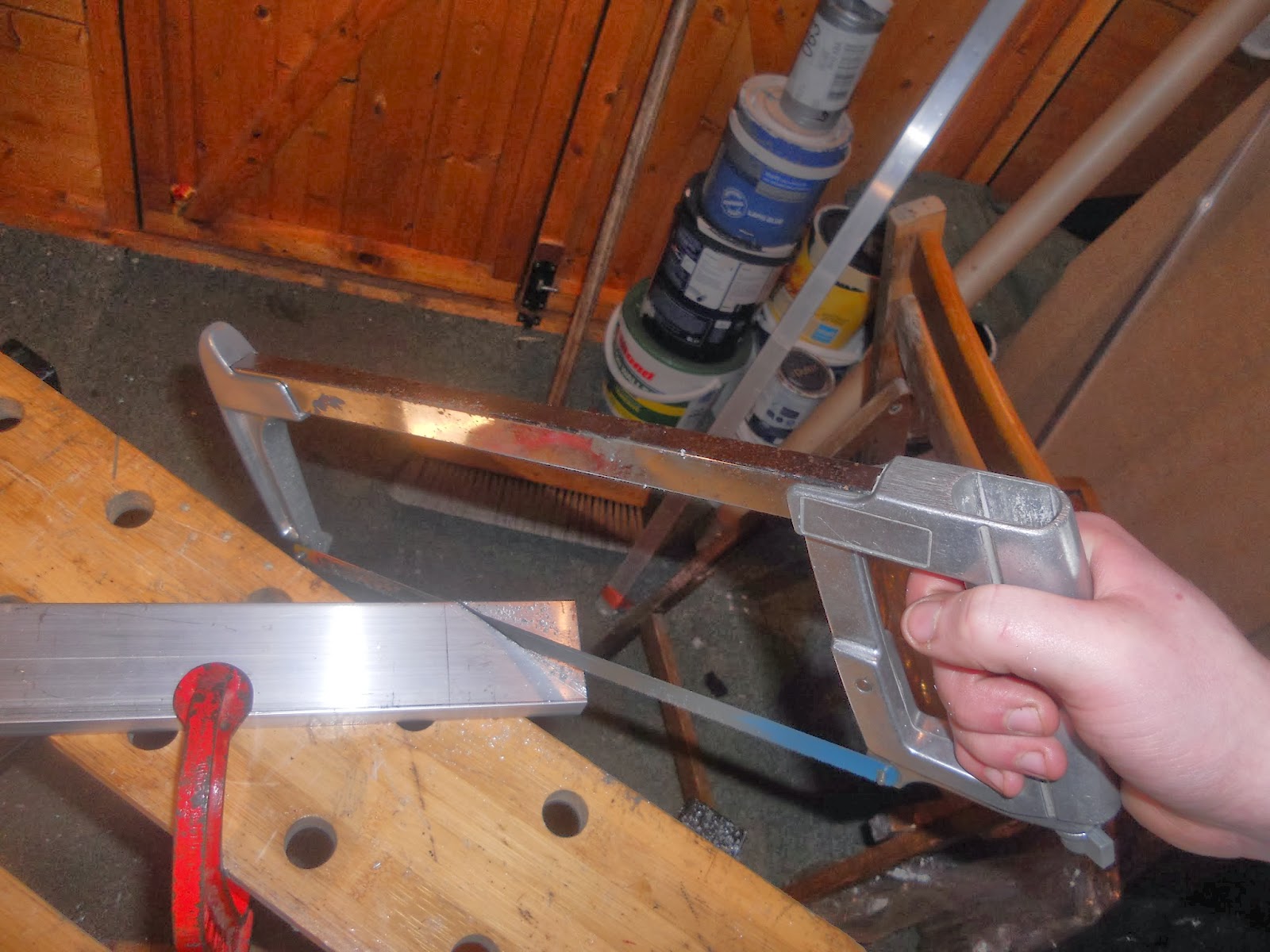 Back to H4XX0Ring up the aluminium. This time 15mm thick 6082 which is what the robot is totally made out of because who needs underweight robots amirite? 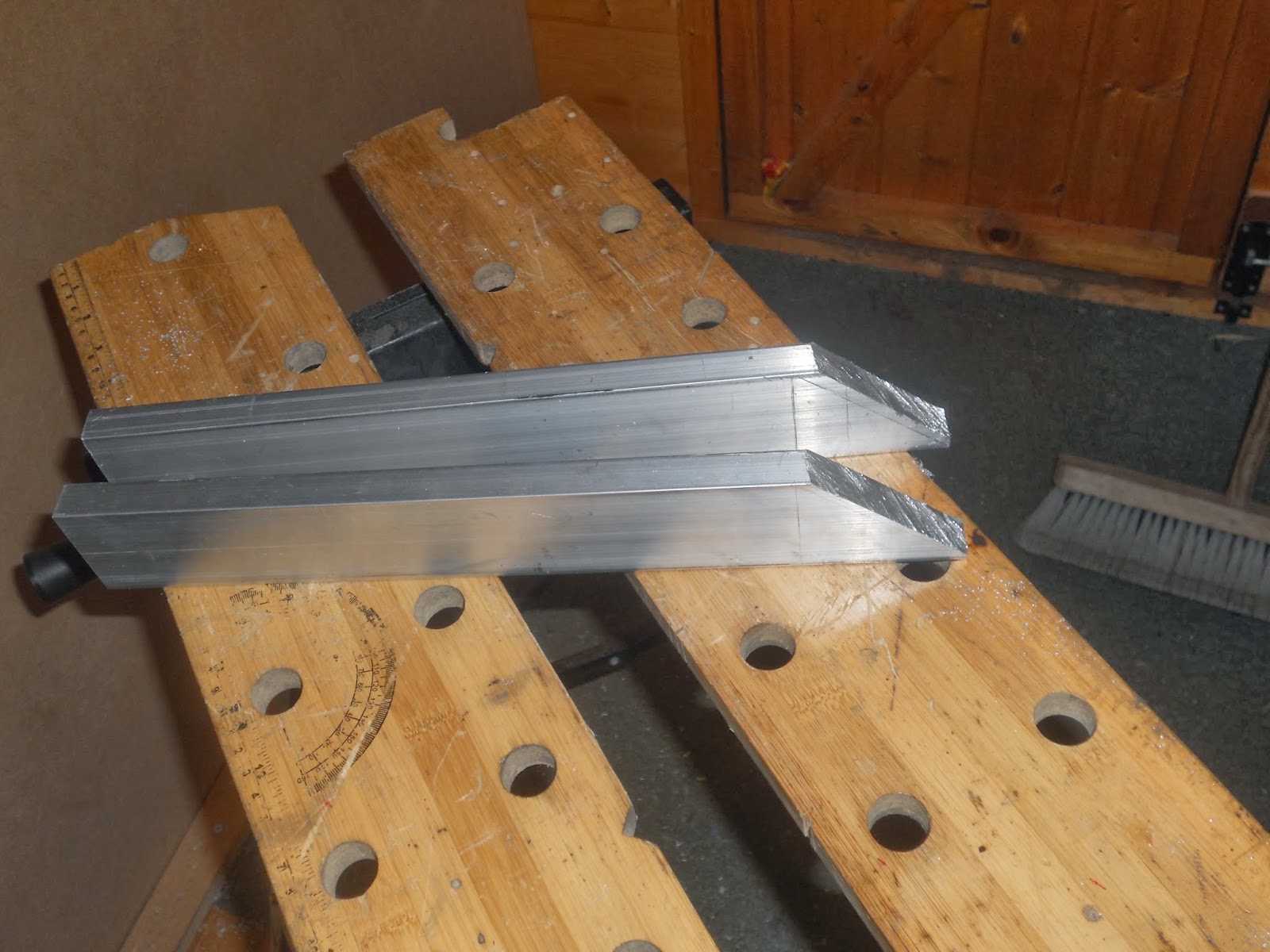 The two outer bulkheads rough cut. A few years ago this would have been job done. Ah such memories. Now to shoehorn these bad boys onto a hobby sized milling machine! *dreams of Bridgeport* 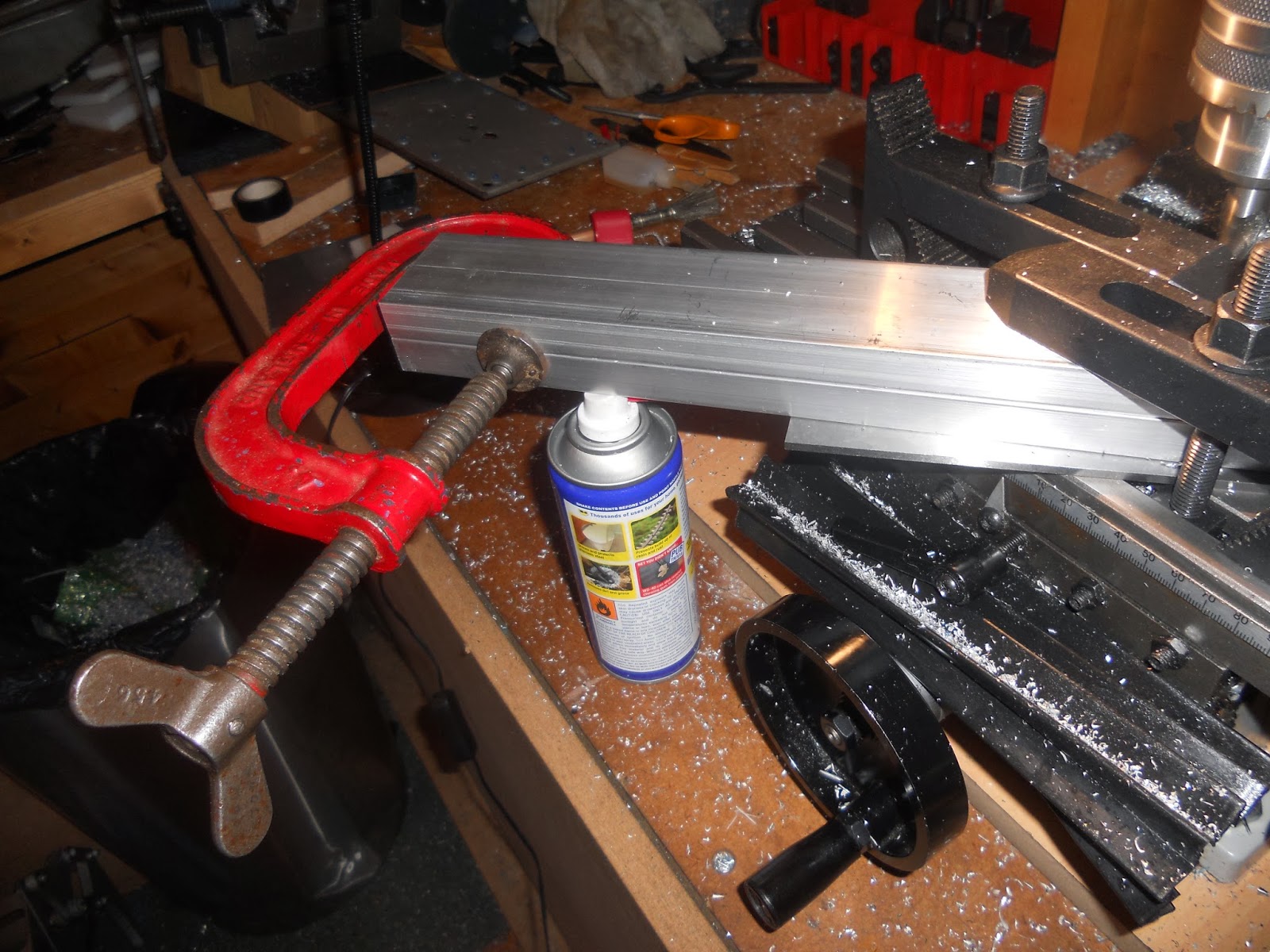 I worked real hard to contain the maximum amount of cringe in one picture. Proper machiney people have probably vomited in disgust at this point. 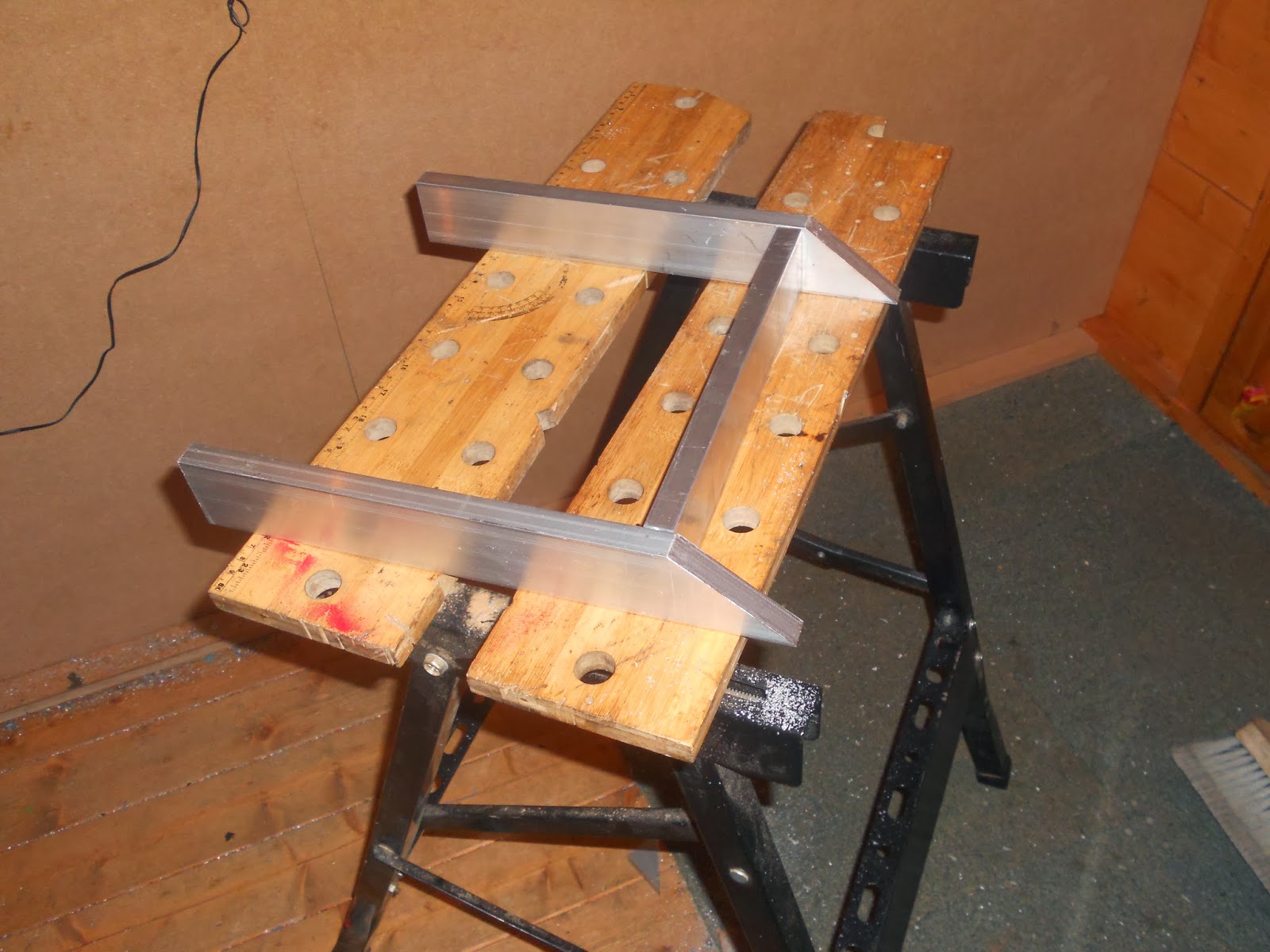 Thankfully I didn't died. I still have all my fingers and now have a slightly more robot shaped robot! Luckily all the rest of the work can be done in the vice and doesn't require any massively dodgy setups. No more angles for me. Box with a weapon from here on in. 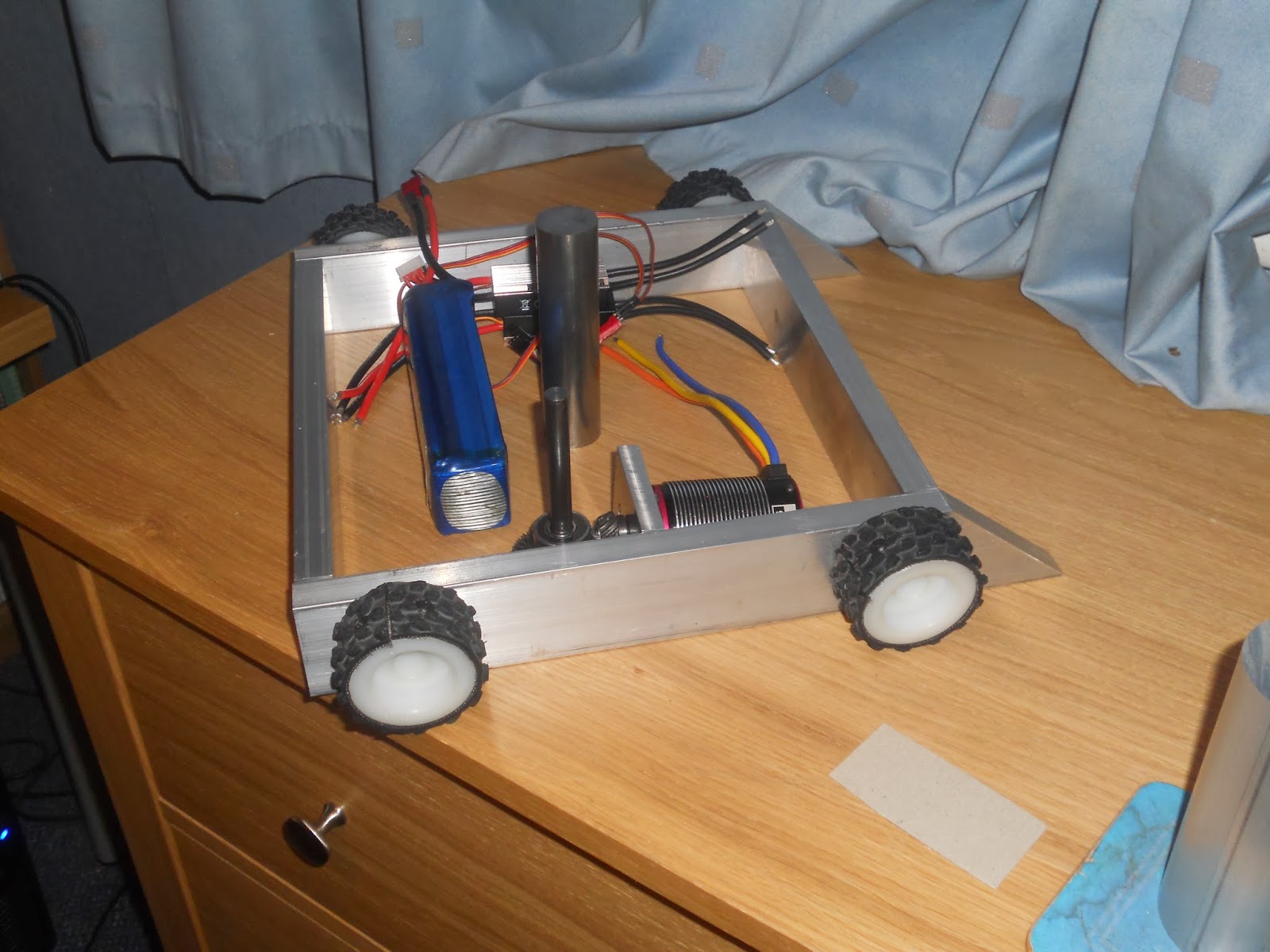 Pretend-O-Bot evolved. It's still 30mm wider than it will be but it has the beginnings of the wedge now. Temporary shafts in place still. I like this robot. The lowness is really appealing. Its made it a right pain though. speaking of which... 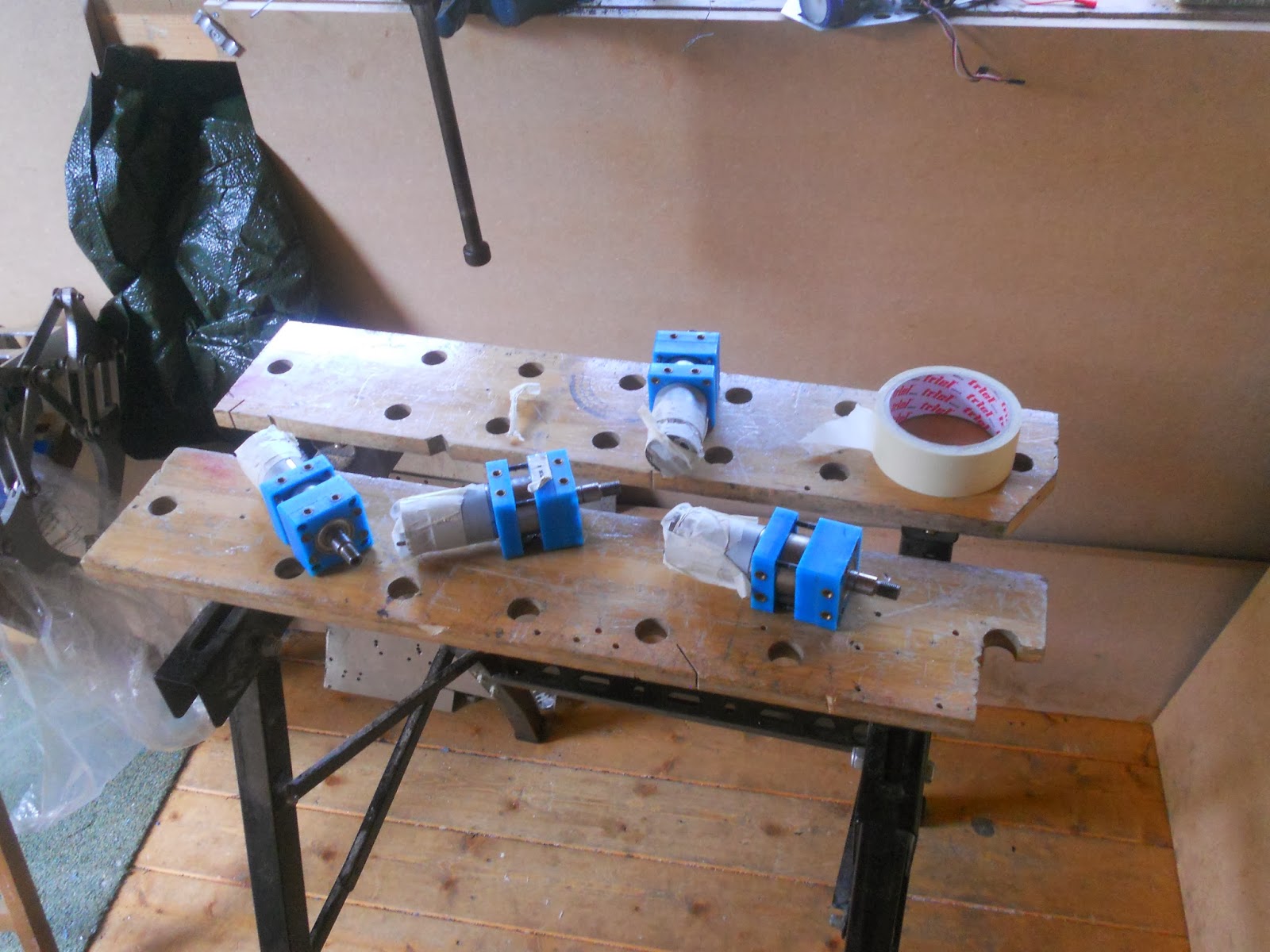 Why are the drive motors covered in masking tape? Harry? Well due to the small wheels and general lowness of the frame, I only had a few mm of ground clearance, which in a real world situation is a bad idea and would leave me grounded if the floor panels got bent up or there was a lot of debris or shrapnel in the arena. How to gain some ground clearance without major changes? Hmm well I could pocket the base plate so the motors sit lower down but the baseplate is hardened steel. Basically unmillable for me. So I had to get real creative. 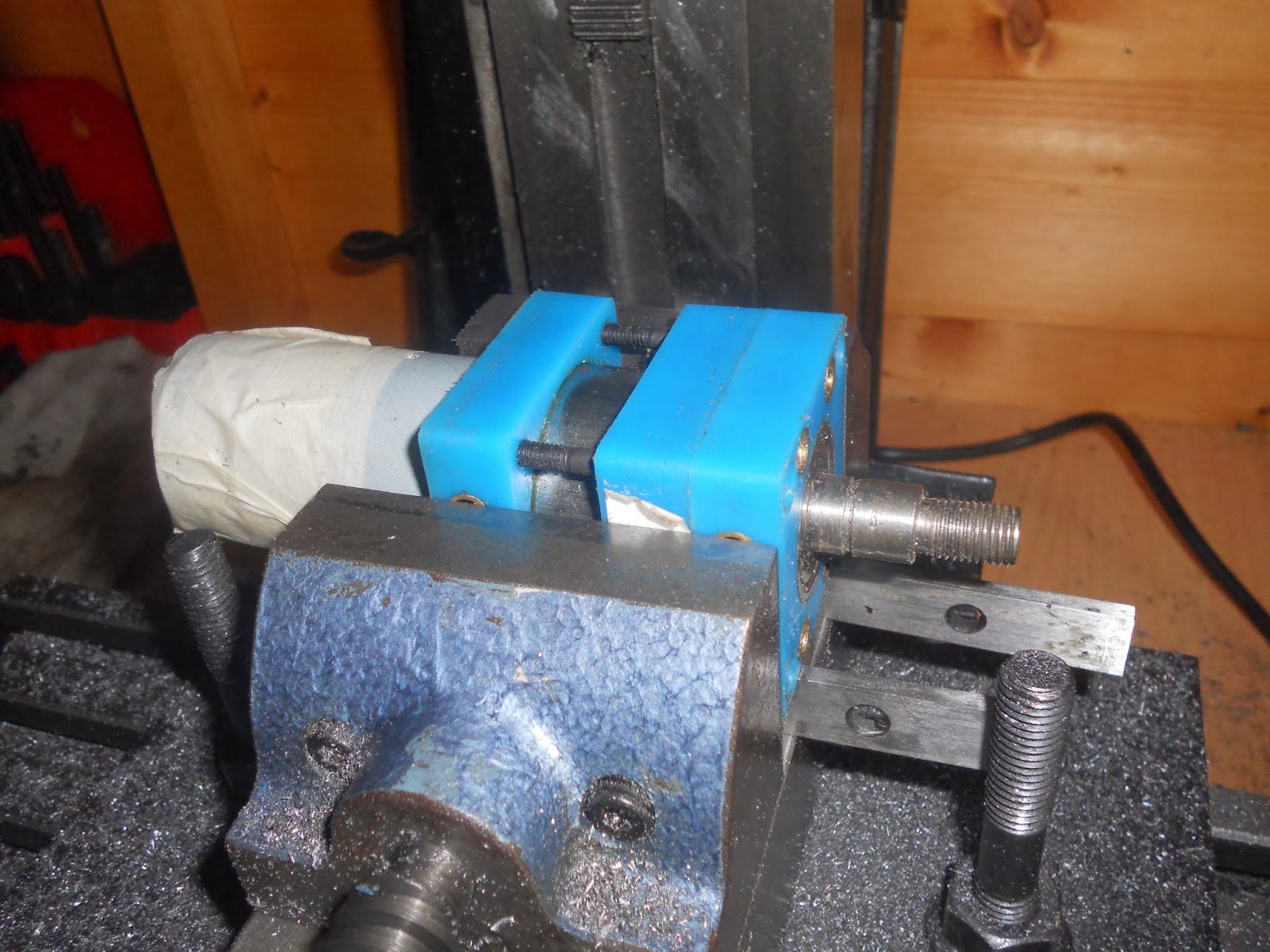 Yeah so I'm milling my gearboxes, all the cool kids are doing it. Don't judge me. There is an unnecessary 2mm or so of material that can go without any adverse effects to operation. Good enough for me! 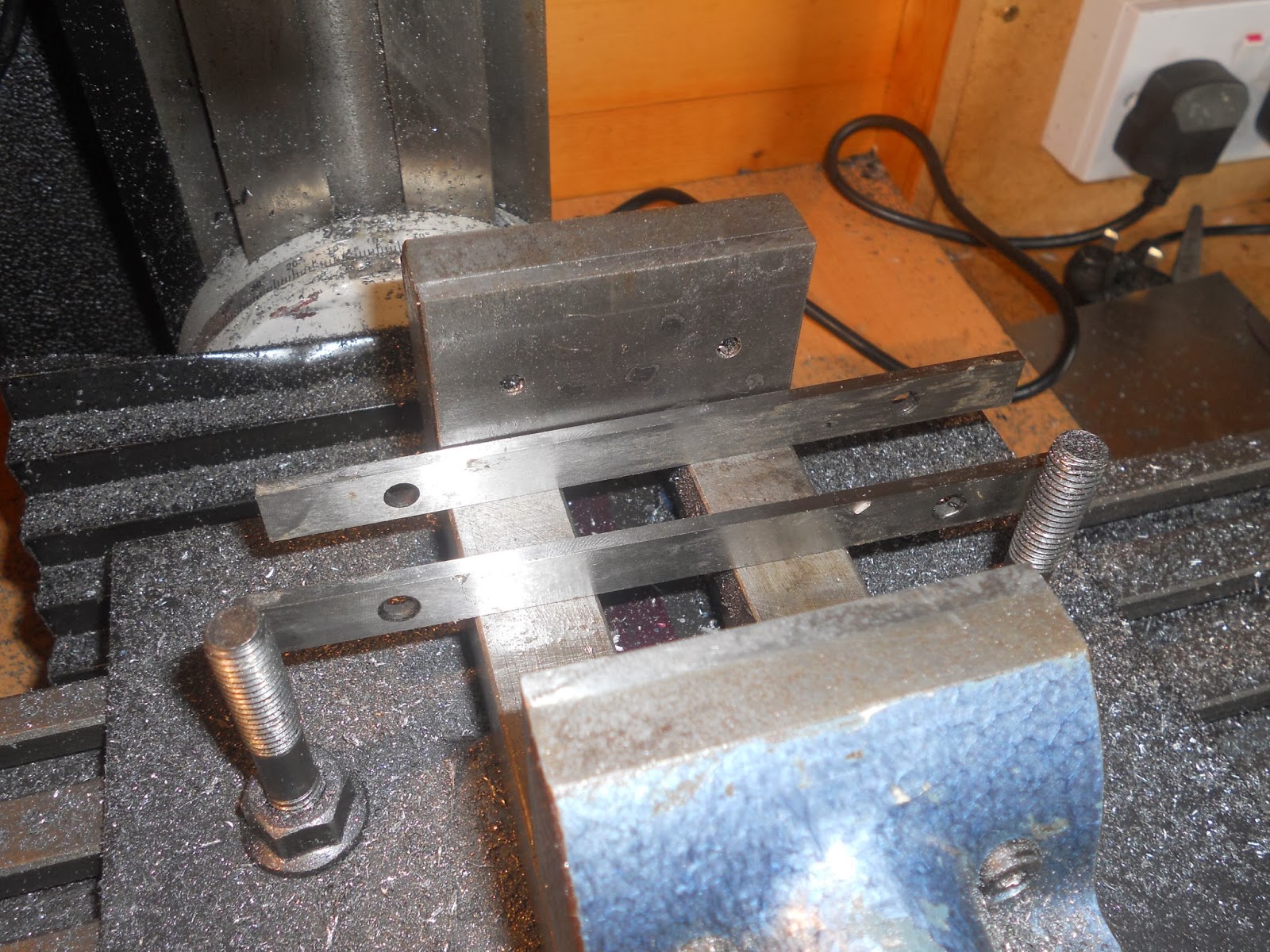 For this I had to bust out my cutest set of parallels. Big hand for chibiparralels everyone. Well, somehow this actually worked. No idea how or why but it did. I take that as a good sign for Massacre. Done all 4 motors without any hitches. Quick blast off a battery shows they work as new.

Well that's it for now. Long and very picture spammed but it could be interesting or useful if you are that way inclined. I'll post again when I've done something else.
Cheers, Haz.
Posted by Haz at 12:15